VPN services have become quite popular over the years, for a number of reasons. They can enable you to access content that is usually locked in your country, for example. They can also keep you more secure when you visit sketchy sites. That is actually their main purpose it seems, for a lot of people. VPNs or Virtual Private Networks, are capable of hiding your IP address and physical location, while encrypting your internet traffic. Therefore, they do keep you safe. In this article, we’ll check out some of the best VPN Android apps / services.

There are quite a few good VPN services available for Android. In the list below, you’ll find nine of them, each of which is quite good. They do differ in a number of ways, though. Some offer more on a free subscription, some less. Others only offer a trial before you need to pay to use them, and so on. One thing they all have in common, though, they’re really compelling VPN offerings. Do note that these apps are not listed in any specific order. Also, these are only our favorites, of course.

Below is a quick overview of the top 9 best VPN Android apps for 2021, including any download and in-app purchase costs. 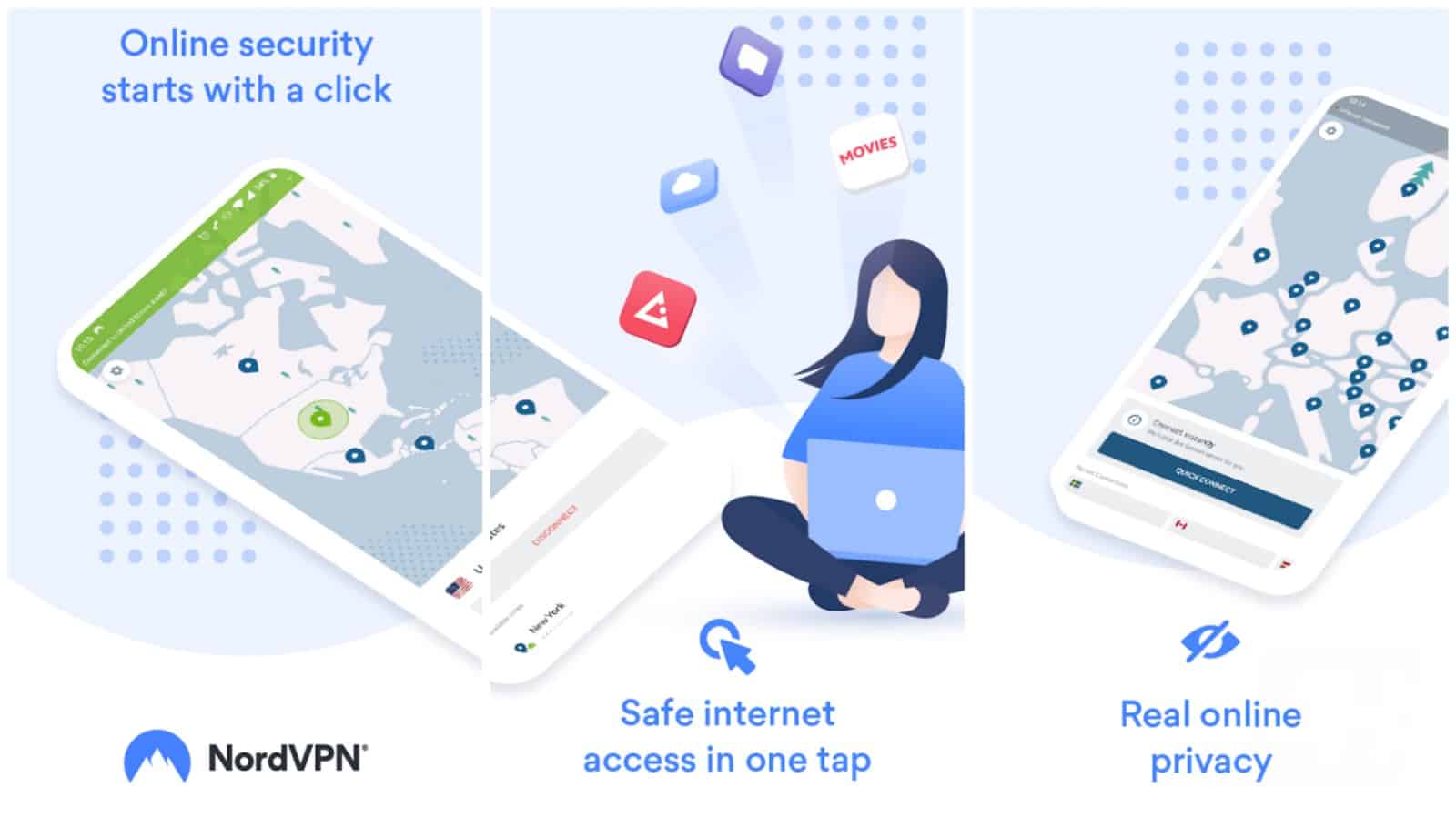 NordVPN is easily one of the most popular VPN services / apps for Android. This app has almost half a million reviews in the Play Store, and the vast majority of them are quite positive. The app design is clean, and the app works great. The app offers over 5,000 servers across over 60 countries. The service on those servers is also quite good, in other words, they’re more than fast enough.

One important thing to note is that NordVPN has a no logging policy, which is always good for privacy’s sake. If you do get a premium service, you’ll also be able to use NordVPN with unlimited bandwidth, which is a must for a specific type of use. NordVPN also offers browser extensions for both Chrome and Firefox on desktops, so you can easily pair this app with your desktop computer usage. There’s a lot more on offer here.

Surfshark is another great VPN app. This app comes with really solid customer support. The app design is also quite clean, and pretty much anyone can find its way around this UI. The company does offer a 7-day unlimited VPN trial, just so you get the full experience before you decide to pay up. Surfshark has excellent servers on offer, and will keep you safe while you’re browsing around.

The company’s VPN shield covers 3,200 servers across over 65 countries. You can whitelist websites and apps, to allow them to bypass the hotspot VPN, if you want. The company is so sure in its service, that the service comes with a money-back guarantee. If you’re unsatisfied with Surfshark during the first 30 days of use, you can get your money back. The connection comes with zero-buffering speeds, says the company, and so on. There’s a lot more on offer here. 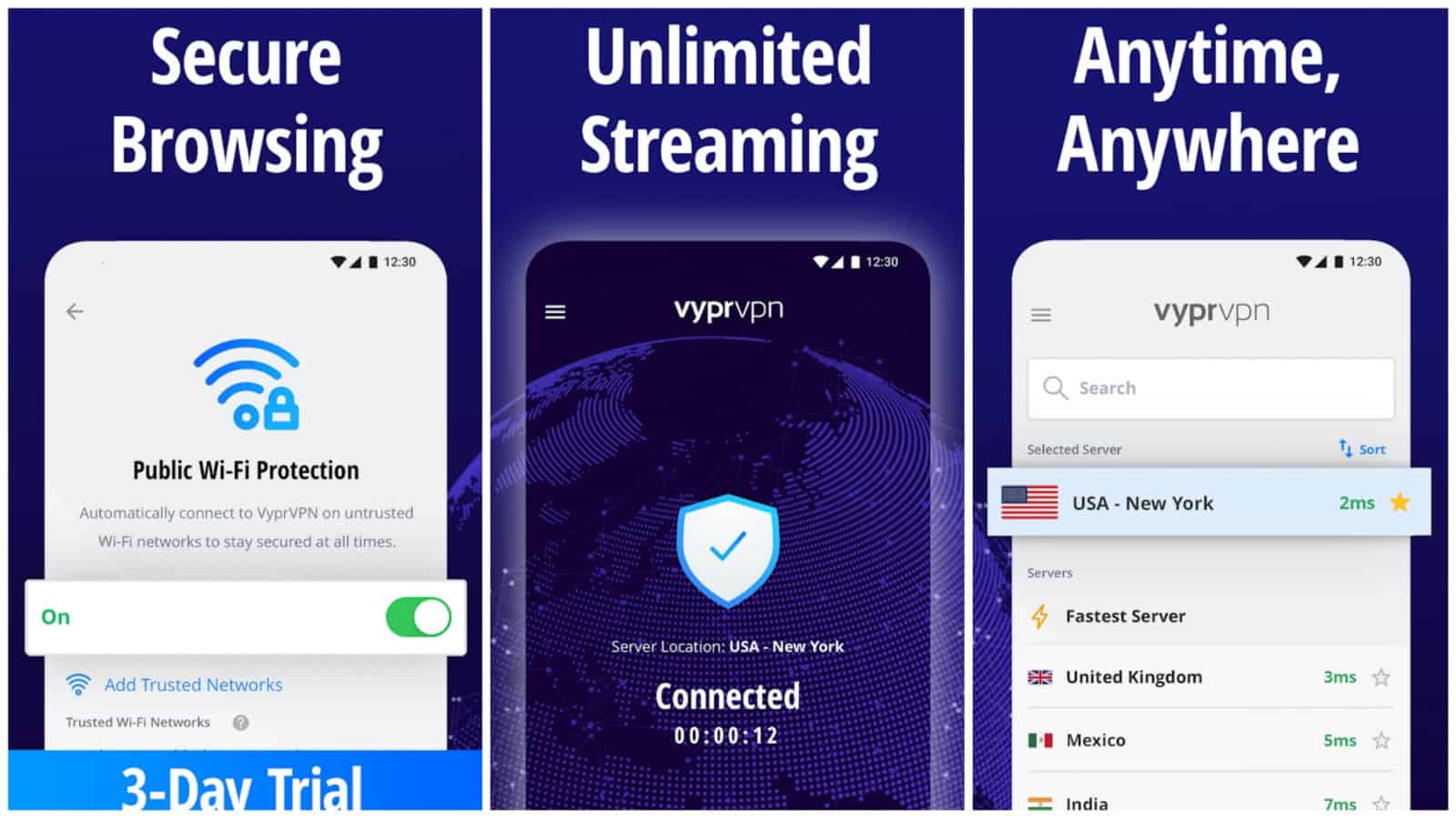 If you’re a former iOS user, VyprVPN’s UI design does remind us of iOS, for some reason. So, this app may feel the best to use for you. This app is not exactly popular because of its UI, though. Its VPN service is quite good. This app is not as popular on Android as some other VPN services are, but quite a few people use it. It’s also well-rated for a good reason. The app offers 700 servers in over 70 countries.

VyprVPN comes with a free tier that offers 1GB of bandwidth. After that, you’ll need to choose one of the premium plans that the company is offering. Once you do that, you’ll get plenty of bandwidth, and be good to go. The company’s logging policy is also clear-cut. VyprVPN keeps logs for 30 days, just to prevent any criminal actions. Ads are not a part of the package, and the app does offer 24/7 customer support for its users. 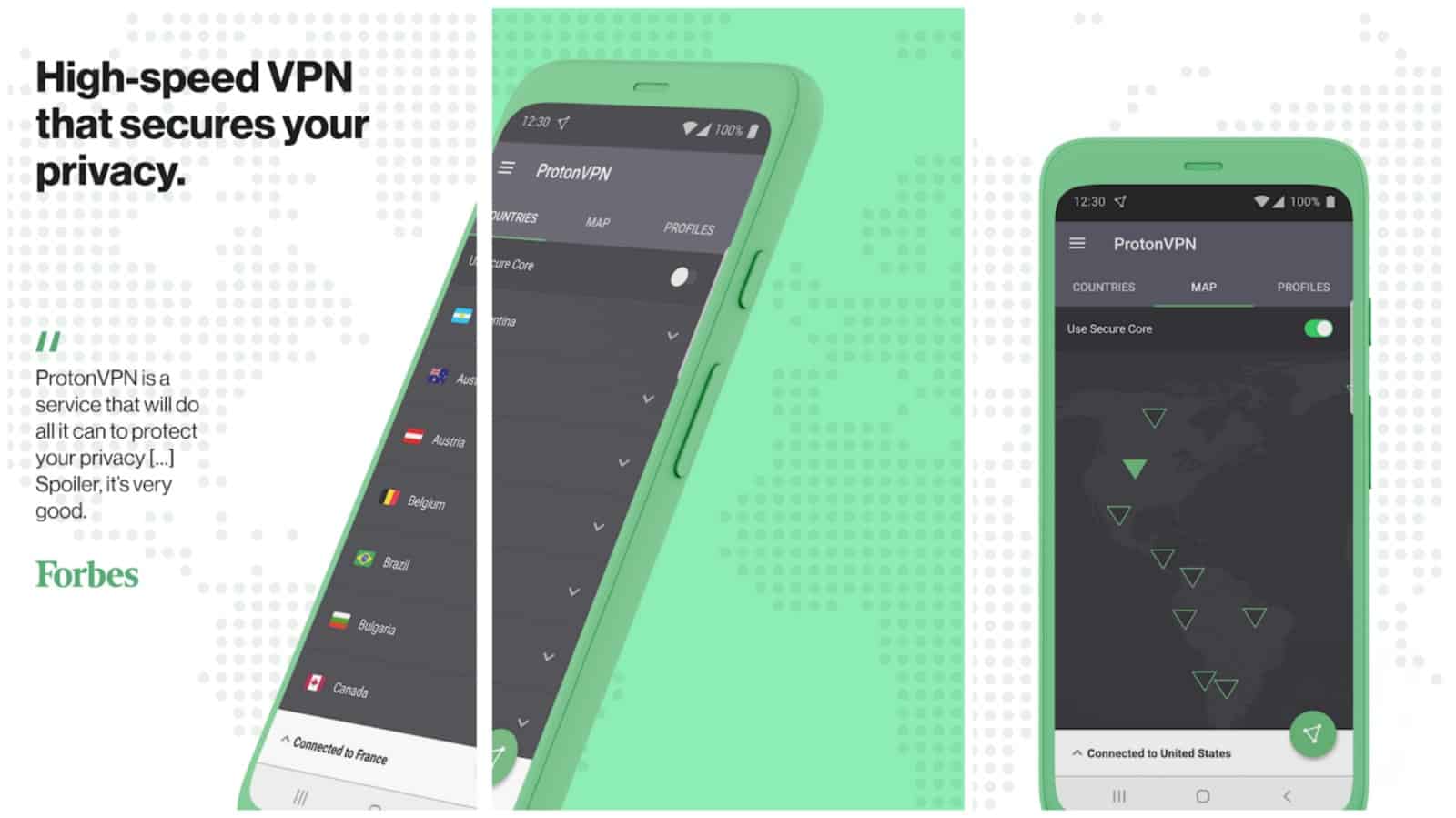 Proton VPN app comes with a ton of features. The UI also looks really clean, and it is dark by default. You do have some theming options on the inside, though, so you can mix it up, and make the app your own. It has a great no-logging policy, which is something we love to see when it comes to VPN apps. Privacy / security is key. This service also has a ton of servers in a lot of different countries around the world.

This app’s free tier will also be more than enough for some people. If you find it lacking, you can always opt for one of three subscription models that are on offer. Those tiers will offer you a chance to connect to many more servers, they’ll increase your Internet speeds, and much more. The app does come with split tunneling support, bypass blocking, and so on. You can use the service on iOS, Windows, macOS, Linux, and more. 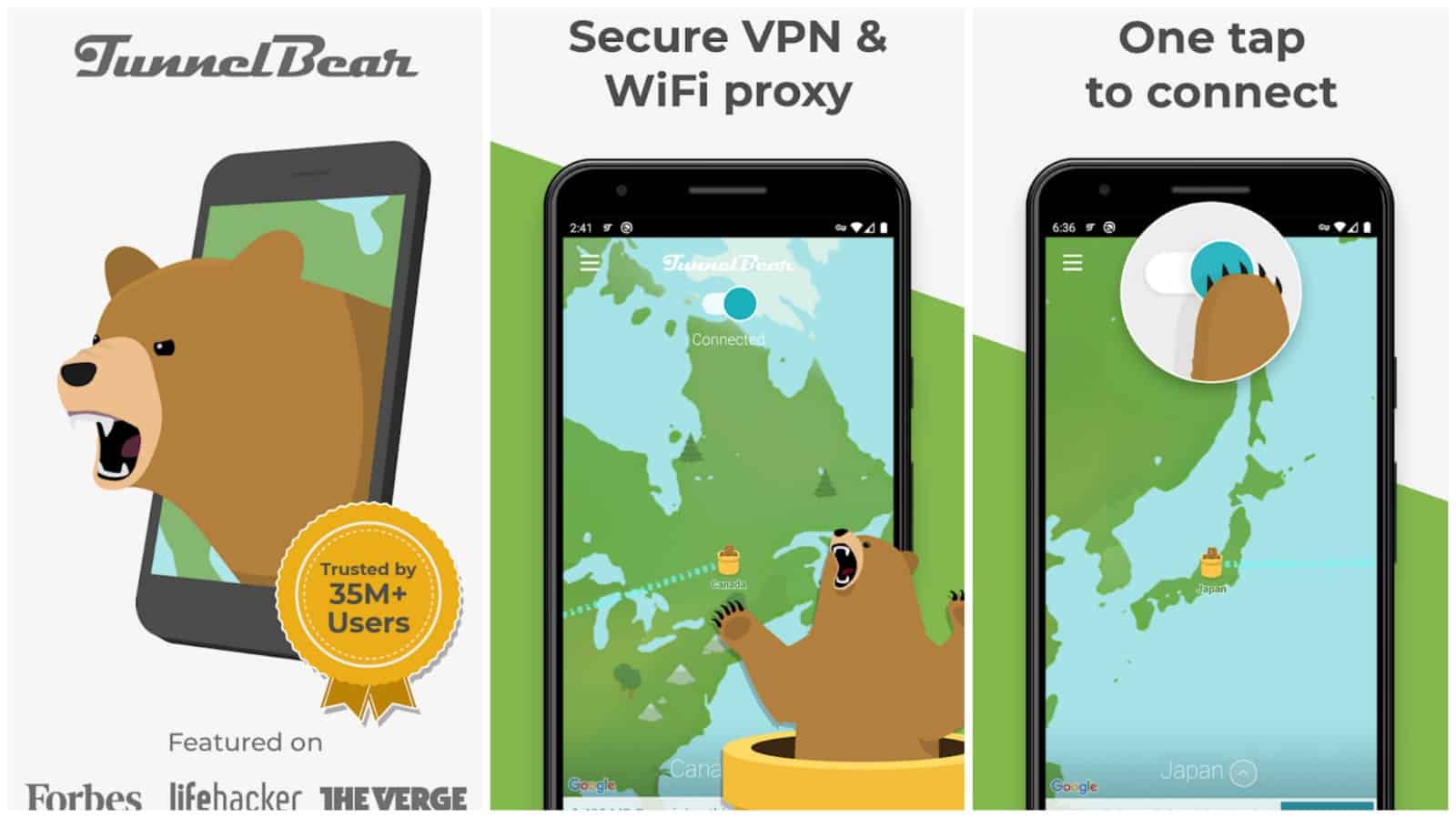 TunnelBear is, without a doubt, our favorite UI when it comes to VPN apps. This app’s UI is great. This app isn’t all about the UI, though, it’s just a part of the picture. The performance of the app is excellent, and the VPN service is top notch. Tens of millions of people use TunnelBear for a reason. There is a free version that comes with 500MB of bandwidth per month.

TunnelBear is also one of those apps that has no logging policy, and it offers 256-bit encryption on top of that. This is also one of the most popular VPN apps on Android. Using it is really simple, as the app has been made in such a way. TunnelBear has servers in over 22 countries, and it also offers 24/7 customer support, just to make sure everything is running as it’s supposed to. 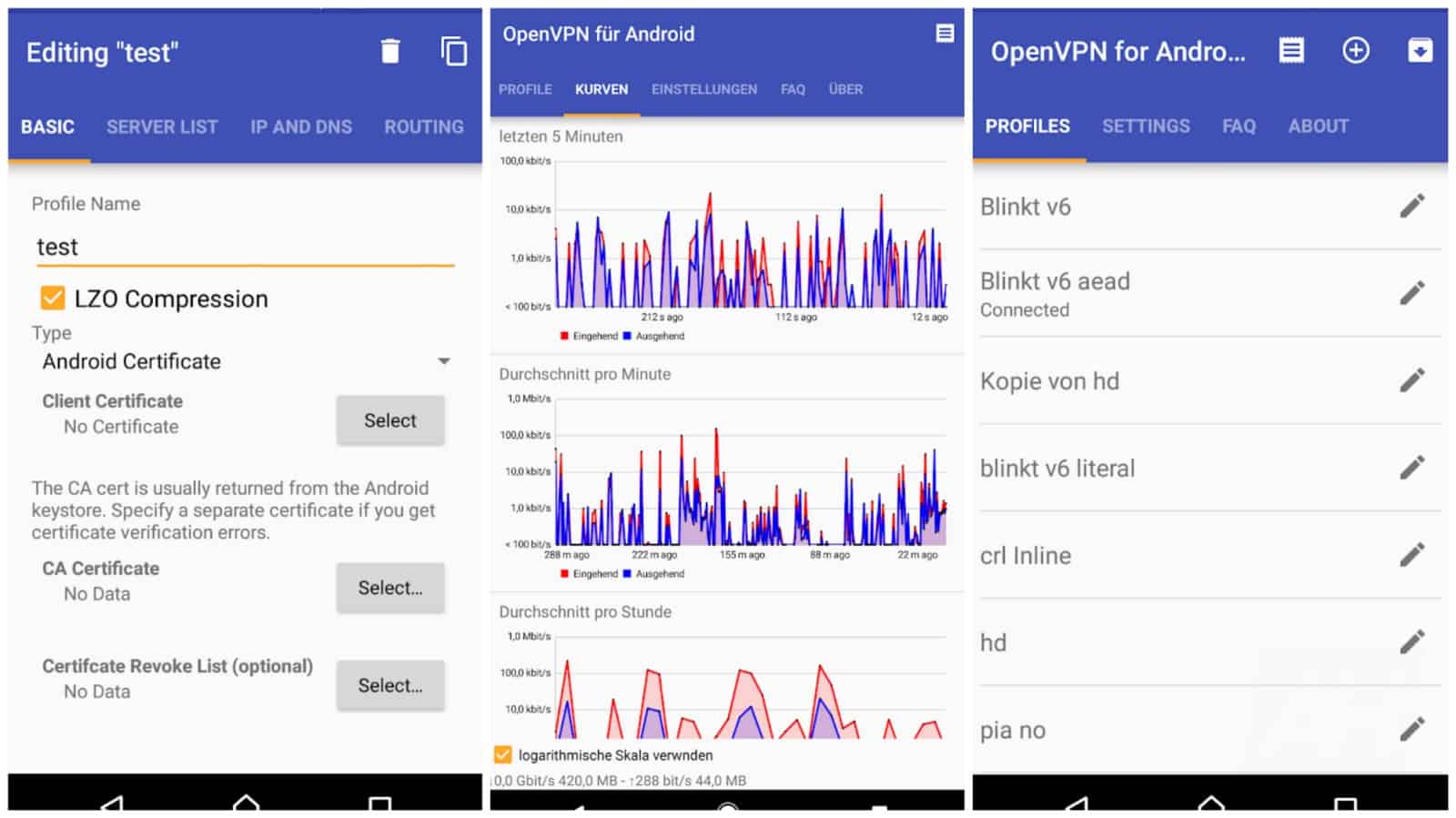 OpenVPN is a bit different than most apps on this list. This app is quite suitable for advanced users. OpenVPN for Android is actually a sibling of OpenVPN Connect, in a way. It comes with very similar features, though it’ll require a setup by someone who knows what he’s doing. Once you do that, though, you’ll have something very robust on your hands, something reliable. Do note you’ll need to create and set up an OpenVPN server yourself in the process.

The UI looks quite nice, though not as visual as you may think. Still, it’s clean, and clean cut. OpenVPN for Android also works really well once you set it up. The thing is, this app is definitely not for everyone, as it will overwhelm most users. The whole setup process is meant for specific types of users. Still, many people use OpenVPN for Android, and the app has a solid rating thus far. 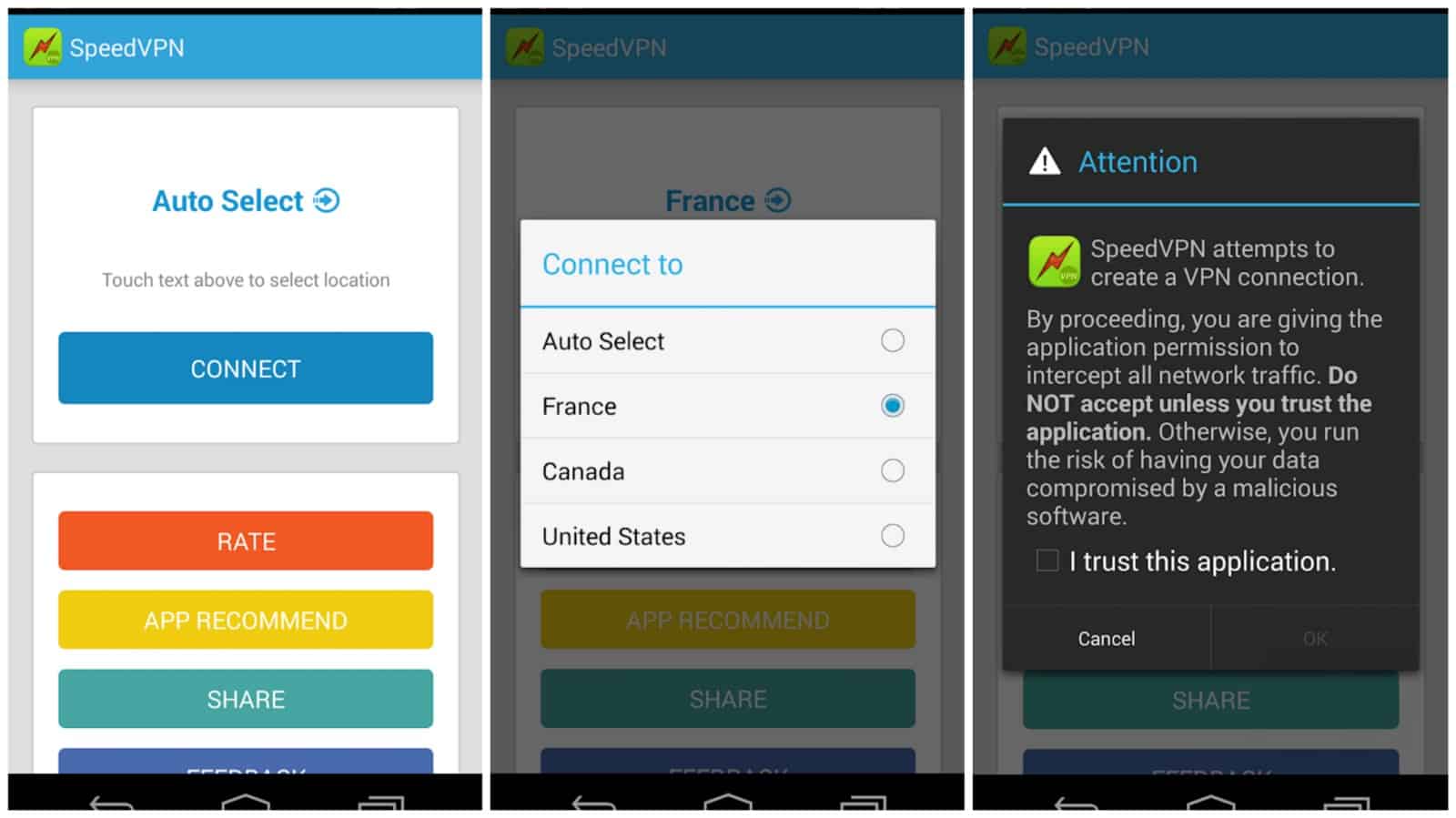 SpeenVPN is kind of a unique app. This app is free, well, kind of. What do we mean by that? Well, SpeedVPN will boot you from the network after 60 minutes of use. You can reconnect immediately, if you want, though, as the service is free. It does this to free up bandwidth for active users. Many of you will probably gravitate towards this service on the account of its free plan, as long as you’re not annoyed by the service cut-off after 60 minutes.

The usage is quite simple, all you need to do is log in, connect, and you’re good to go. Do note that SpeedVPN, considering it’s free, doesn’t exactly offer the speeds you may think. It’s perfectly fine for browsing and such usage scenarios, but for something more intense, chances are you’ll look elsewhere. Still, it’s once again worth noting this service is free, and what it offers suits many users. 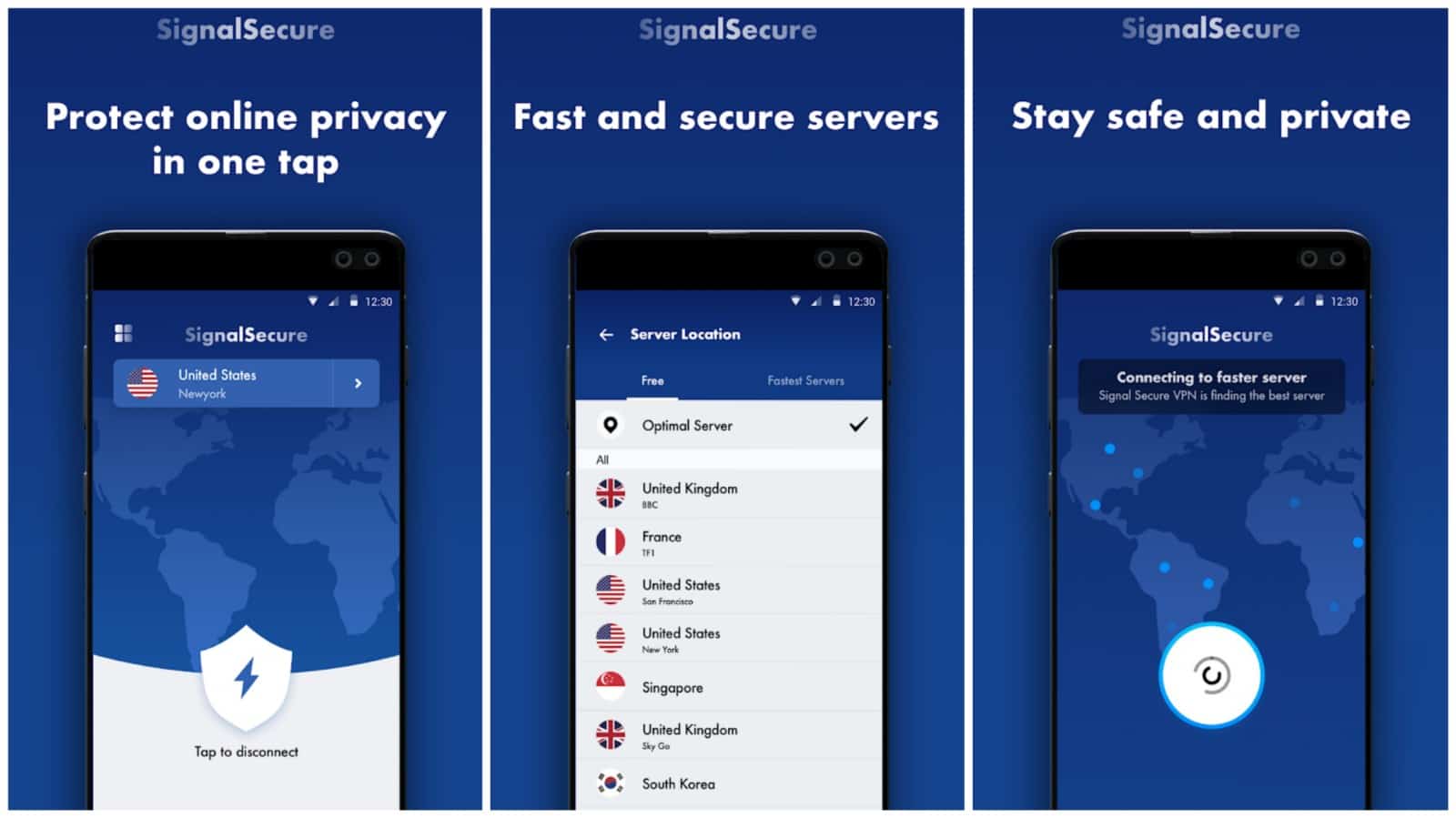 Signal Secure VPN is much newer than most apps on the list, but it’s still quite compelling. It does come with a free version with ads, though you can always remove those ads by signing up for a premium service. The app offers servers in half a dozen countries, and it doesn’t require you to log in or anything of the sort. You don’t need to make an account as you do on most other VPN services.

Now, do note that that the service is not available in China, so if you’re planning a trip there, you’ll have to look elsewhere. Also, the company has a no logging policy, which is always good to see. Other than that, it has all the features you’d expect from a VPN app. The app’s UI is really clear-cut, which is great, and the app does work really well once you get going.

SurfEasy is a VPN app that is packed with features. First and foremost, the app comes with a no logging policy. it offers over 500 servers in 28 countries, and the free version does offer 500MB of bandwidth. Paid plans are quite reasonable, and the app even offers some additional features for those of you who download torrents. The unlimited bandwidth is quite affordable here.

The service does come with live customer support, and all your traffic gets encrypted. The available servers are split across a ton of different countries, as they should be. You have plenty of choices here. If you do get a premium tier subscription, you will also get ad-tracker blocking, which is something that many of you will want to have. The offered servers are quite fast as well, and the app doesn’t look bad at all.