Watching TV shows was, and still is, one of my favorite past times during the pandemic. Actually, that was true even before the whole ordeal started, and I do believe it’s the same for many of you. If you get to a point where you watch quite a few TV shows, and finding it hard to keep track of them, that’s when some of these apps may come in handy. Below, you’ll find a list of our favorite TV show tracking apps for Android, these apps are amongst the best out there, that’s for sure.

Keeping track of what exact episode you watched, what episode is coming next, when it’s coming out, and so on, is immensely easier with one of these apps. We’re only scratching the surface in terms of functionality, though, the vast majority of these apps offer far more than that. There are more great TV show tracking apps in the Play Store, but we did our best to filter the elite ones here. These are, at least, our favorite ones, so read on if you’re interested.

Below is a quick overview of the top 9 best TV show tracking Android apps for 2021, including any download and in-app purchase costs.

TV Time is, without a doubt, amongst the best TV show tracking apps, if not the best one. This has been my go-to app for years now, and it has only gotten better with time. The UI in this application is excellent. It’s easy to use, and a pleasure to look at. The list of your shows is separated into several lists, actually. The ones that you’re currently watching are highlighted, and if you haven’t watched a particular show for a while, it will be moved to a different list. The last list consists out of shows you haven’t yet started watching.

Once you watch a particular episode, you can quickly mark. The app also offers short descriptions of each episode, as well as user reviews, so that you know if it’s any good or not. You can also discover new shows based on what you like to watch, and a general search function is included as well. You can search for movies, add movies to your watch lists, etc. The app is focused on TV shows most, but the functionality for movies has been added a while back. There are many more features included here. 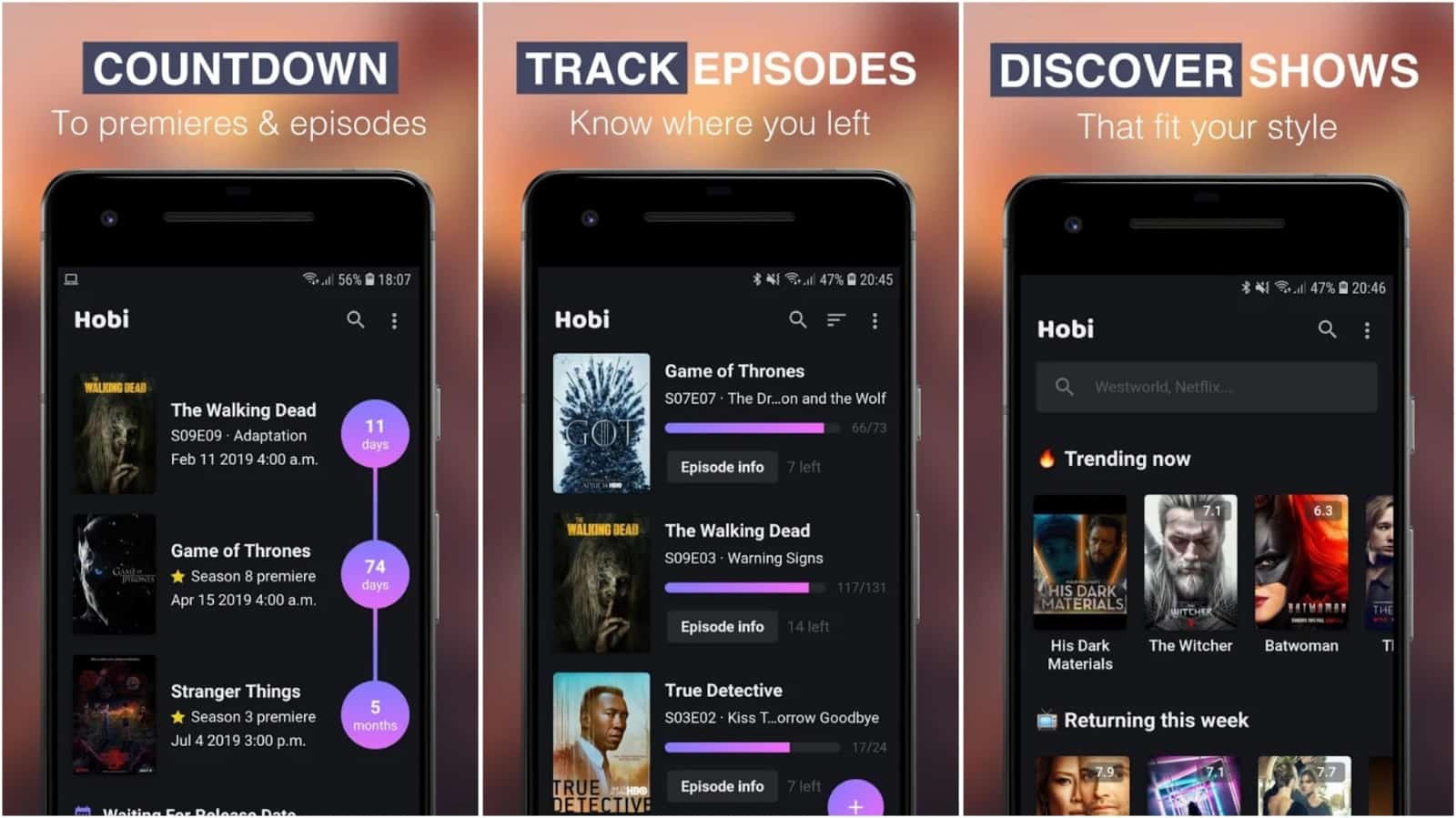 Hobi is a great alternative to TV Time, as it’s a great TV show tracing application in its own right. It also comes with an appealing UI, and has most of the functionality TV Time offers. The app comes with a countdown to the next episode, while it also allows you to discover new shows to watch. It also offers custom notifications, in case you’d like to keep in touch with everything.

There are over 50,000 TV shows in the app’s series guide, and it will also show you the channel and network your series is airing on. You can also get more information on upcoming episodes, and check out what’s currently trending on TV. The app comes with Trakt.tv sync, and much more. The app does include in-app purchases, but you can use it for free if you want, you won’t be forced to pay up.

This app is technically a Trakt client for TV show and movie tracking. It provides you with fast access to all your trakt tv shows and movies. Its design is quite clean, it’s different to what the first two apps on the list offer, but appealing in its own right. This app will allow you to discover new and popular TV shows from trakt, and it will also show you stats about your TV series and movie watching.

The app comes with a built-in calendar for TV shows, and it can also send notifications your way, for newly-released episodes. You can access this app’s data while you’re offline without a problem. This app even comes in a Windows version, if you’d like to access it via your PC. There are over 80,000 shows included in the app’s trakt series guide, while ratings / reviews are a part of the offering as well.

Next Episode is yet another solid choice for tracking your TV shows or movies. This app is a bit more minimalistic than the others we’ve talked about, as it doesn’t deliver as many features. That doesn’t really have to be a bad thing, though. Its design is a bit more bare-bones than the other apps we’ve talked about. It does come with a great calendar view, though, that you’ll probably like.

You can add your favorite TV shows and movies to a list, and always know what’s going on. The app also comes with a decent discovery tool, for finding new content to watch. You can also browse shows from creators you like, based on what you’re watching at the moment, or have watched in the past. Details regarding specific TV shows are included, along with a channel they’re airing on. 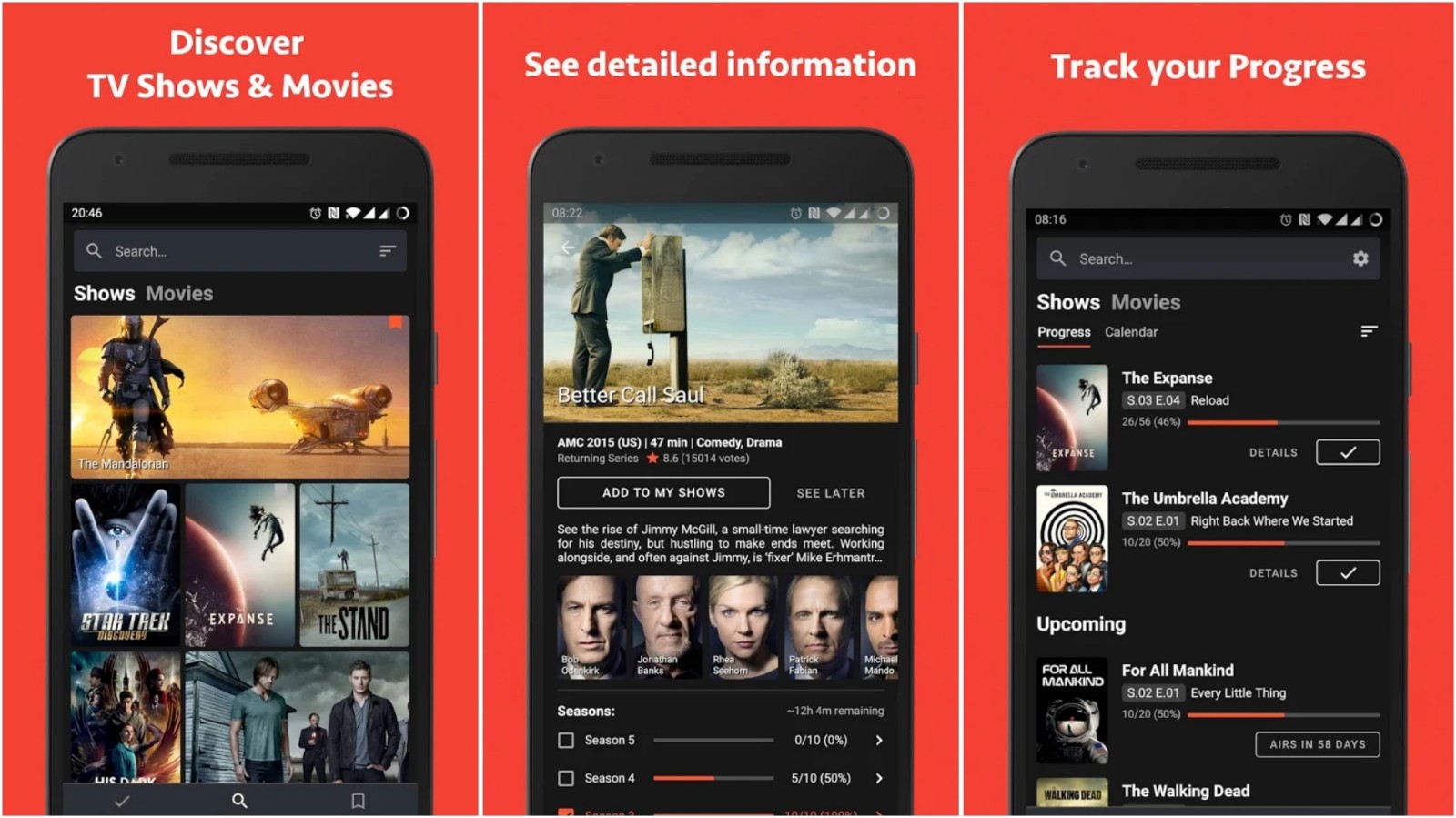 Showly 2.0 is easily one of the best-looking TV show and movie tracking applications on the list. The developer did a great job with the UI here. It’s really nice-looking, and it also looks kind of unique at the same time. The app is a joy to use because of it, while it also performs really well. There is a progress bar for each TV show you’re watching, and a great discovery tool is included in the app as well.

You can create custom watch lists, if you want, while you can also sign into your Trakt account if you want to sync everything. The app can provide you with notifications for new episodes, seasons, and premieres. If you prefer to use a widget for that purpose, you can do that as well. The app supports seven languages, just in case English is not your main language. This app is definitely worth trying out. 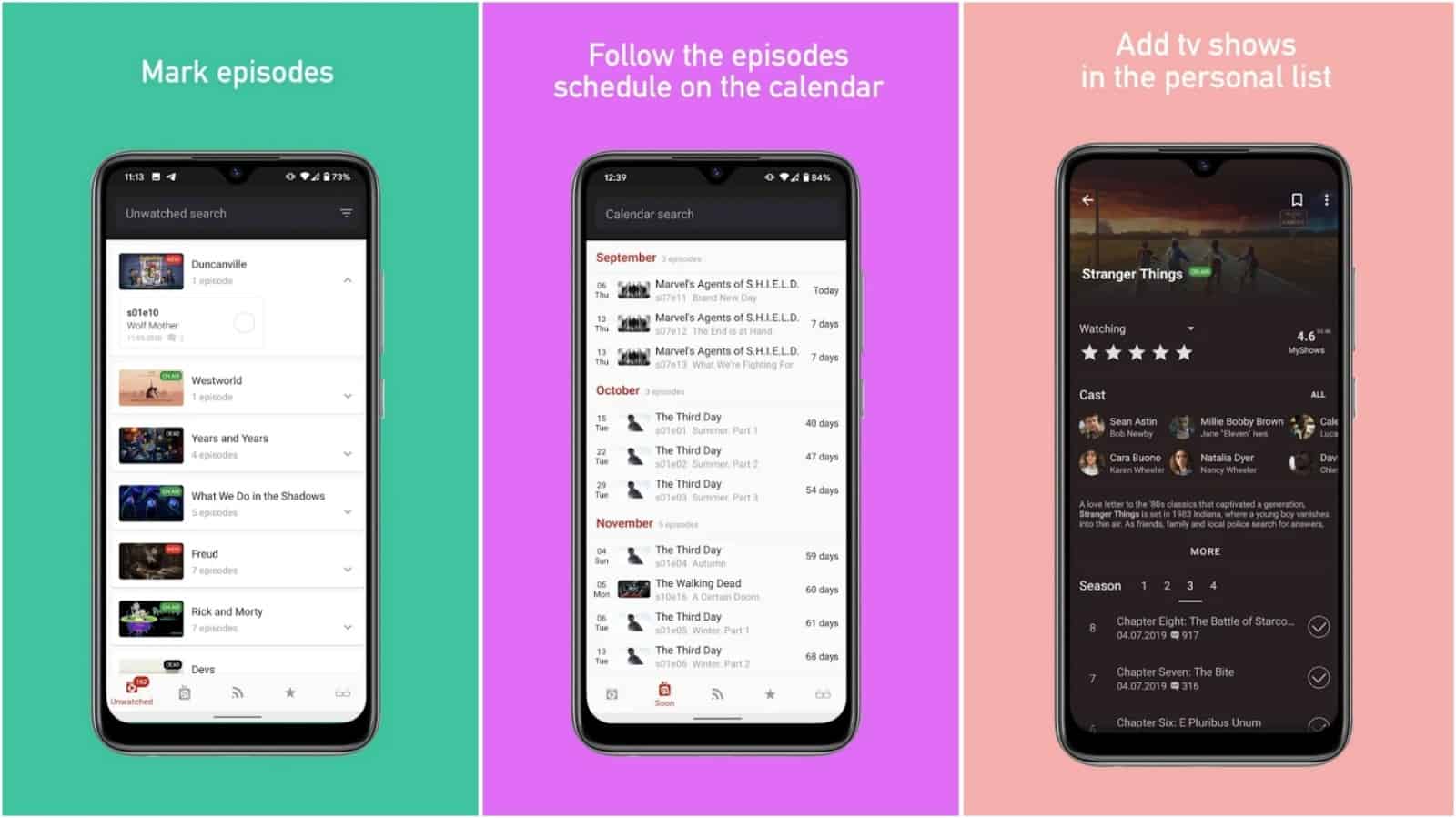 MyShows is another great option. This app comes with a great community discussions section, where you can talk about specific TV shows or specific episodes. A general tracker for TV shows is included, of course. You can mark off new episodes that you’ve watched, and keep everything up to date. You can also follow the episode schedule in the calendar view, if you want.

Adding TV shows on your own list is quite easy as well. MyShows can also recommend what to watch next if you’re done with a specific show, or you simply want to watch something similar to it. This app is not packed with features like some other apps are, but that’s what may attract you to it. The UI looks good, while the app is highly functional in general. In-app purchases are included, but you won’t be forced to buy anything. 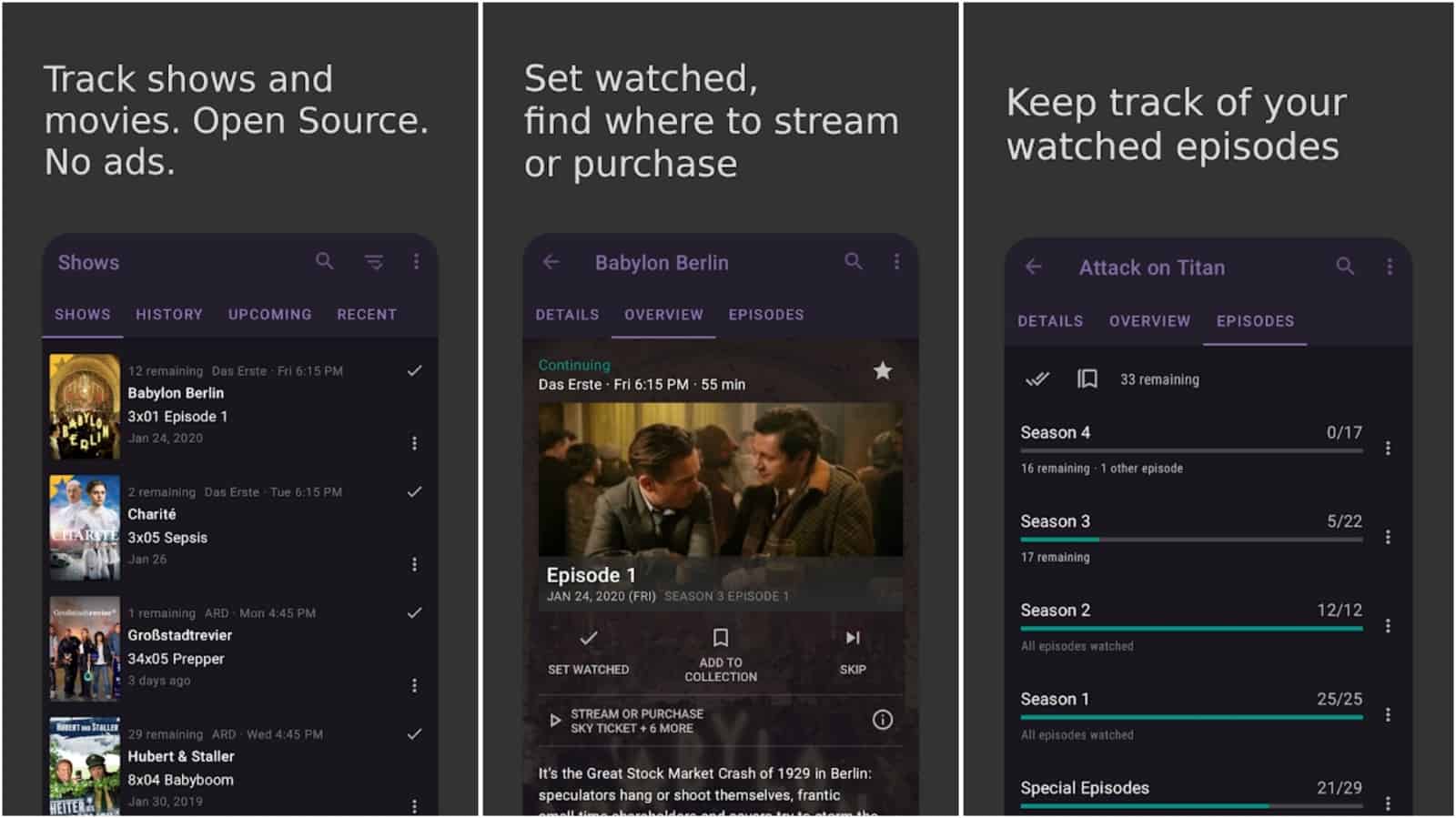 The SeriesGuide app is yet another popular app for keeping track of your watched TV shows and movies. This app has been on the scene for quite a long time, for a good reason. Its UI is modern, and it offers a ton of functionality. On top of everything, this is an open source application. It does not come with ads, and if you’re looking for something open source, this is it.

It has all the major features you’d expect out of such an application. You can tick off seasons you’ve watched, add your favorite TV shows and movies, read about them, and discover new ones to watch. The app does integrate with Trakt, and it does come with a backup and sync option as well. There is also a useful widget included in the package, a minimal one, that many of you will like.

Flixi is an excellent alternative to TV Time, and one of the newer apps on the list. This app has been around for a while, but not nearly as long as some of the others on the list. Flixi is actually trying to be smarter than all other similar apps. This app is supposed to be your TV and movie personal assistant of sorts. The app will let you know when the show starts, when it ends, when it has been cancelled, or renewed.

It can do basic things such as keep track of what episodes you’ve watched, of course. Flixi learns from each of your interactions with the app, in order to do a better job of recommending movies and TV shows for you to watch. Flixi also syncs with every platform and network in over 50 countries, while a whole notification system is also included. This app’s UI is also on point, and it’s definitely worth trying out. 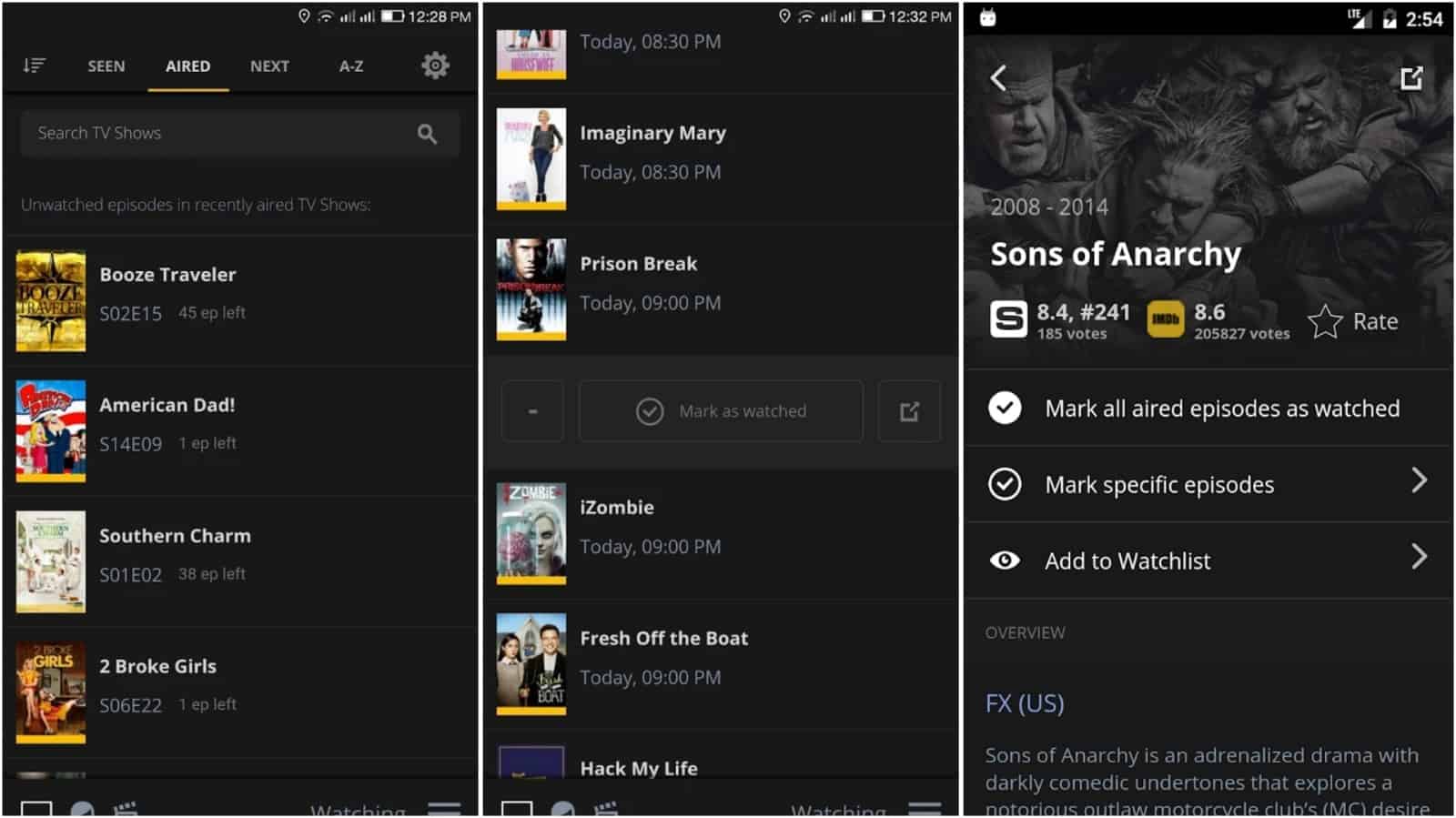 Simkl Lists is yet another TV show and movie tracking app that you probably haven’t heard of. Simkl Lists has a very nice design, without trying too much. The UI design is simple and highly functional. You can easily tick off episodes that you’ve watched, and keep track of everything. You can also create custom lists for movie and TV show watching, and also see what’s airing next from your watchlist.

The app comes with both dark and light themes, while it offers a TV guide as well. It will show you the top rated shows on TV, and also the best overall. It’ll help you discover new shows to watch, and it has all other functions you’d expect out of such an app. Simkl Lists isn’t the most popular app on this list, but it is one worth trying out, especially if you’re looking for a minimalistic app.