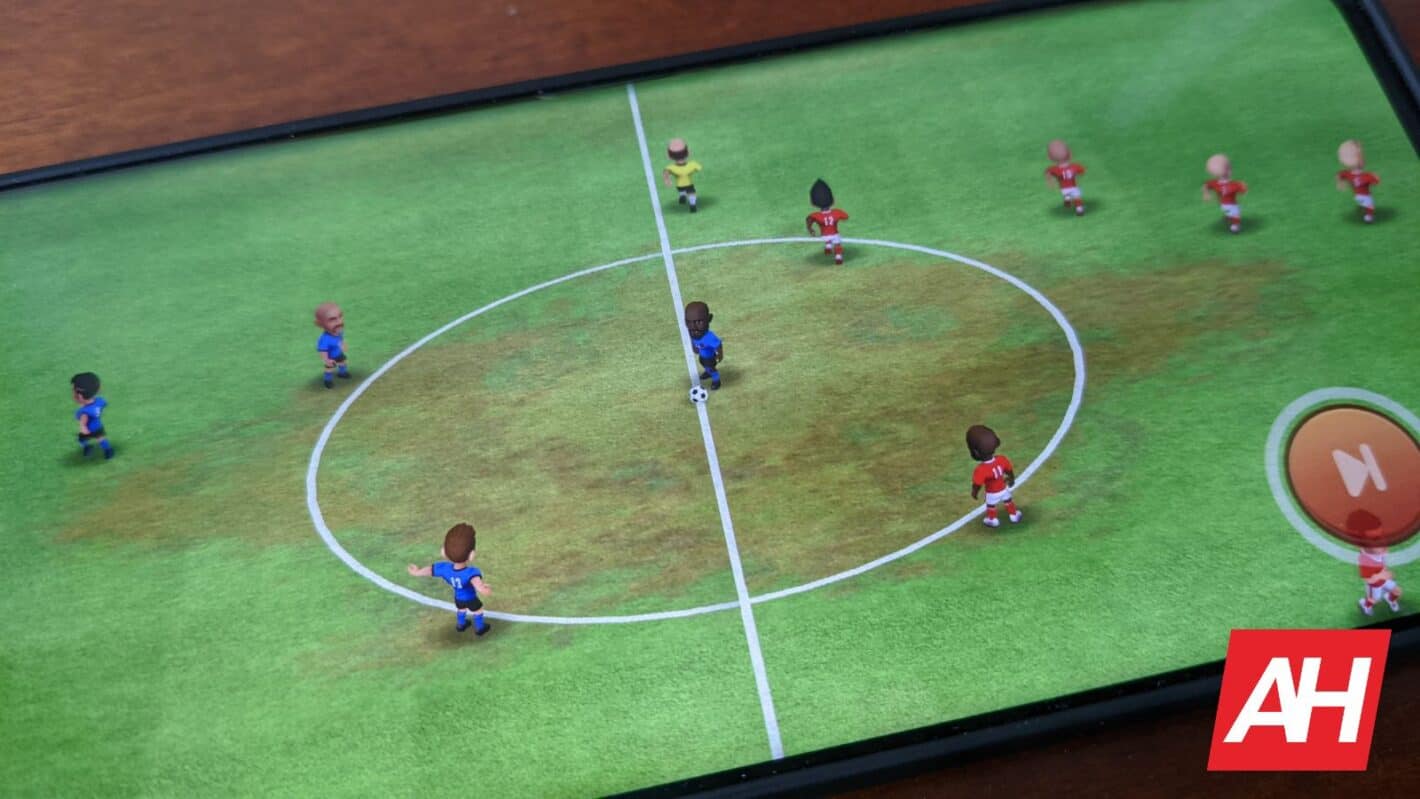 There are quite a few compelling soccer / football games in the Google Play Store. Considering that the European soccer championship is currently underway, what better time to talk about those games. We’ve decided to hand-pick 10 soccer / football games to talk to you about. These games are amongst the best available in the Google Play Store that’s for sure. You’ve probably heard about some of them, but not all.

You’ll find some really well-known titles on the list, like eFootball and FIFA, but also some less-known ones that may appeal to you even more. These games do differ quite a bit when it comes to gameplay, so even trying out all of them may be a good idea. Some are more focused on team success, while others focus on you as a player. Some games are focused on one aspect of the game only, and so on. There’s a lot to try out here.

Below is a quick overview of the top 10 best soccer Android games for 2022, including any download and in-app purchase costs.

The eFootball 2023 is one of the best known soccer game series in the world. It recently lost the ‘PES’ aka ‘Pro Evolution Soccer’ from its name, but it’s still KONAMI’s offering. This game is huge, and it offers great graphics, and great gameplay as well. eFootball 2023 is trying to be a football / soccer simulation, just as FIFA.

This game does not have as many licensed clubs and players as FIFA does, but that’s not something that will bother many of you. There are various player packs that you can unlock in the game, and you can play online matches as well. You can sign various soccer legends to your squad, and the game is getting weekly live updates. Those updates update rosters, and much more than that.

FIFA Soccer is a soccer / football simulation, just like eFootball 2023. This game looks gorgeous, and it has access to all the necessary licenses, so you’ll see a lot of familiar names here. There are over 50,000 players included in the game, including all the players from major leagues. UEFA Champions League and Europe League competitions are also included here, as all licenses have been secured.

You can challenge your friends in real-time 11 vs 11 matches, if you’d like. You can also lead a single player to glory in this game. The graphics are excellent, and so is the gameplay. FIFA does deliver one of the most realistic football / soccer simulations to your smartphone, there’s no doubt about it. There are various game modes that you can try out in this game, depending on what you’re interested in.

Soccer Stars is a fun little game from Miniclip. This is a turn-based game, and it presents your players in form of hockey puck-like figures. The main goal of the game is to hit the ball into the opponent’s net, as it is in regular soccer games. This gameplay is much simpler, though, as you have only one way to hit the ball. You’ll need to flick your player towards the ball, and be careful of how hard you hit the ball.

This game can be played both offline, or online, against real people. The gameplay does sound simple, and it is. This game is suitable for pretty much everyone thanks to its simplicity. You can even play online tournaments here, against players from all around the world. Collecting different teams and cups is also a possibility. The graphics are simple, but good enough, this is not exactly a game that requires top-of-the-line graphics.

Dream League Soccer 2021 is yet another soccer simulation that is getting updated for each season. It has been around for a long time now, and it does a great job of competing with both FIFA and PES. This game has over 4,000 FIFPro licensed players, and the graphics in it are also really good. Your main goal in this game is to build your own team that will crush everything in its path.

You will be playing the games, as you would in FIFA or PES. You’ll also need to train the players you sign, so that they reach their potential. You can even customize your manager in this game, choose from different options including hairstyles and outfits. There are 8 divisions included in the game, and more than 10 cup competitions you can compete in. Recruiting agents and scouts will also be your job here. 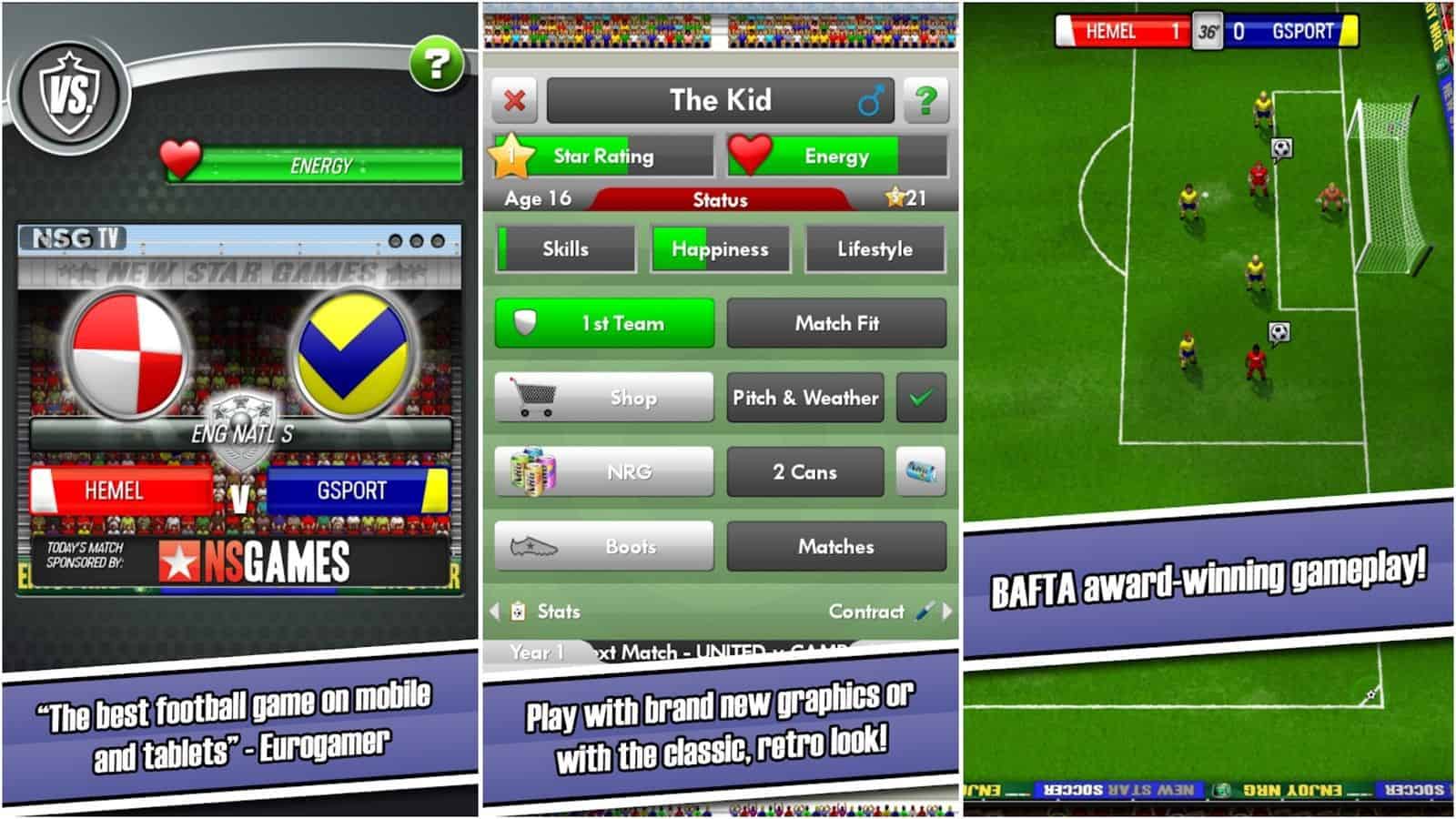 New Star Soccer is focusing on one soccer player, you. You start things off as a talented 16-year-old soccer player, and it’s up to you to improve your skills and advance. You’ll need to choose the right skills to train, and prove your worth on the pitch. You will be playing every game, this is a semi-manager game, as you are playing the games that are coming. On the flip side, you do have to manage your training, and so on.

You’ll also be required to manage your relationships, with your teammates, your coach, your partner, and your sponsors. Ruining each of those relationships will have its own negative effect. You can also risk your earnings in the casino, brine people, and so on. It’s one of the rare games that allow you to experience a soccer career from the player’s eyes… on your smartphone.

Football Strike game is all about set pieces. This game does offer excellent graphics, and the fact it focuses only on set pieces is a bonus in that area. It allowed the developer to truly boost the graphics side of things. You can take on your friends in multiplayer free-kick face-offs, or try to succeed in the career mode. Therefore, this game can be played both online and offline, it’s your call.

If you choose to play the ‘Career’ mode, you’ll be travelling through different stadiums around the globe, and taking on various challenges. You can play as a player or as a keeper, it’s up to you. Conquering Career mode will earn you medals, and as you progress, you can upgrade your player and his equipment. It’s worth noting that this game also comes from Miniclip, and the gameplay is also quite simple.

World Soccer Champs is a truly fun soccer game. The graphics look dated on purpose, and the camera angle brings some memories of older soccer games. In this game, your goal is to manage your team, and try to lead them to success. You’ll be required to pass, dribble, and shoot by using swipe controls. These do take a second to get used to, but you’ll be up to speed in no time.

There are over 100 leagues and cups included in this game. Real player names are reachable via a downloadable data pack. The game is free to play as well, though in-app purchases are included, as they are for almost every game on this list. World Soccer Champs is a great arcade game that will keep you glued to your smartphone. It’s fun, and it’s definitely worth trying out.

Soccer Super Star is a really nice 3D soccer game worth trying out. This game is not trying to be a simulation of soccer or anything of the sort, it embraces its arcade status. It’s immensely fun to play, though. All you need to do is flick your finger across the screen to kick the ball and score a goal. that sounds easy enough, and it is, but the thing is, as you progress, those shots do become more difficult.

You’ll need to bend your shots and split defenses in order to score. This is essentially a flick-to-kick game, and there’s nothing wrong with that. You can play offline, if you want, though an online mode is also available. You can join weekly offline tournaments in order to prove yourself. The game does offer simple controls, but the gameplay does become more difficult as you progress.

Soccer Royale: Clash Games is a wacky soccer game, that’s the best way to put it. This is a strategy game in which you’ll compete against real-world players in 1v1 clash games. You’ll be able to unlock new clash heroes, which will bring new abilities and strengths to your team. So, for example, you can unlock a player that can get unrealistically tall and cause mayhem, or one that can make some deadly fiery shots.

You’ll also be able to level up your players in order to improve their abilities. You can join clans and compete online. The graphics in this game is good, and it fits the game really well. It’s nothing to write home about, though, by considering the type of game we’re looking at, that’s for the best. You will be able to earn prices as you progress as well. In-app purchases are included here, but the game is free to play.

Mini Football – Mobile Soccer is the last game on this list, but it’s certainly not because it’s the worst. This game is excellent. Players look like bobbleheads, and in combination with the rest of the graphics, that looks kind of great, it fits the gameplay. In this game, you’ll need to build, upgrade, and customize your team. You’ll be able to win players, and upgrade them as you progress.

There are over 100 customization options for customizing your team. You can choose between unique logos, jerseys, shorts, socks, and boots. There are over 30 unique country kits available, and you can even choose which ball you’d like to play with. You can play through different tiers in order to progress. There are 5 unique stadiums that you can play on. The controls in the game are easy to learn, and the game is immensely fun to play.