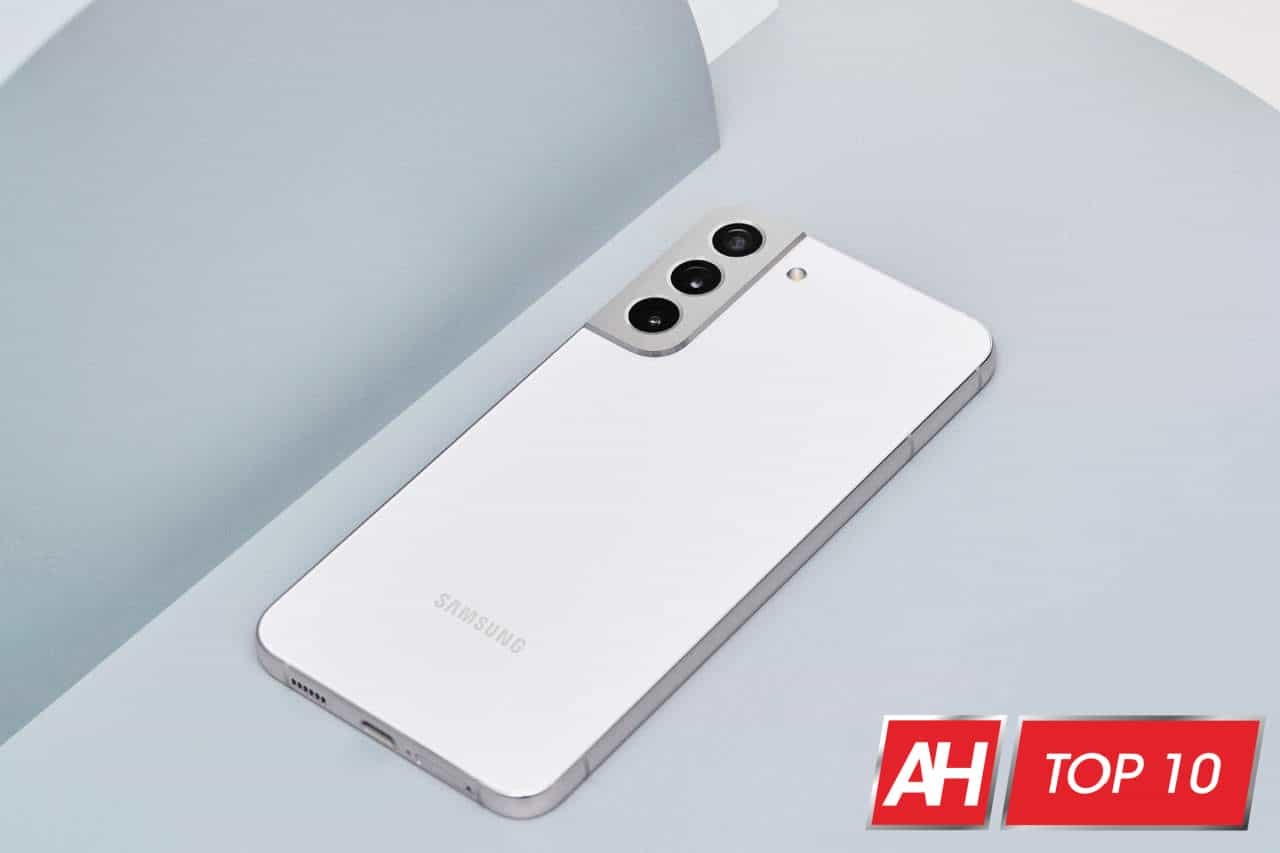 While the Galaxy S22 is only $799, it is still worth protecting your investment. A case can handle a drop, while the Galaxy S22 may not be able to. Replacing a case is much cheaper than the whole phone, or even the screen – which can be a few hundred by itself.

In this list, you’ll find a number of great cases for the Galaxy S22, ranging in prices, and styles. So that there is something available for everyone. Without further ado, here’s our list of the best Galaxy S22 cases. Protect your smartphone in style with Samsung’s Leather Case option for the Galaxy S22.

The Leather Cover is available in two colors: black and brown. These cases look really good, and do add some bulk to your Galaxy S22, so think about that before you purchase. But after months of use, the leather is going to look incredible, once it has weathered.

It’s a great looking case that will look even better over time. New this year is the Smart Clear View Cover from Samsung. It looks to replace the LED Cover this year, and instead gives you the same information in the upper-right hand corner. This makes it look a lot like the Cover Screen on the Galaxy Z Flip 3. If you liked the LED Cover, then this is going to be a good option for you.

This is a flip case, so it won’t be great for everyone. But on the flip side – pun intended – this should allow you to flip the cover to the back and not cover the cameras. Which is a nice change. 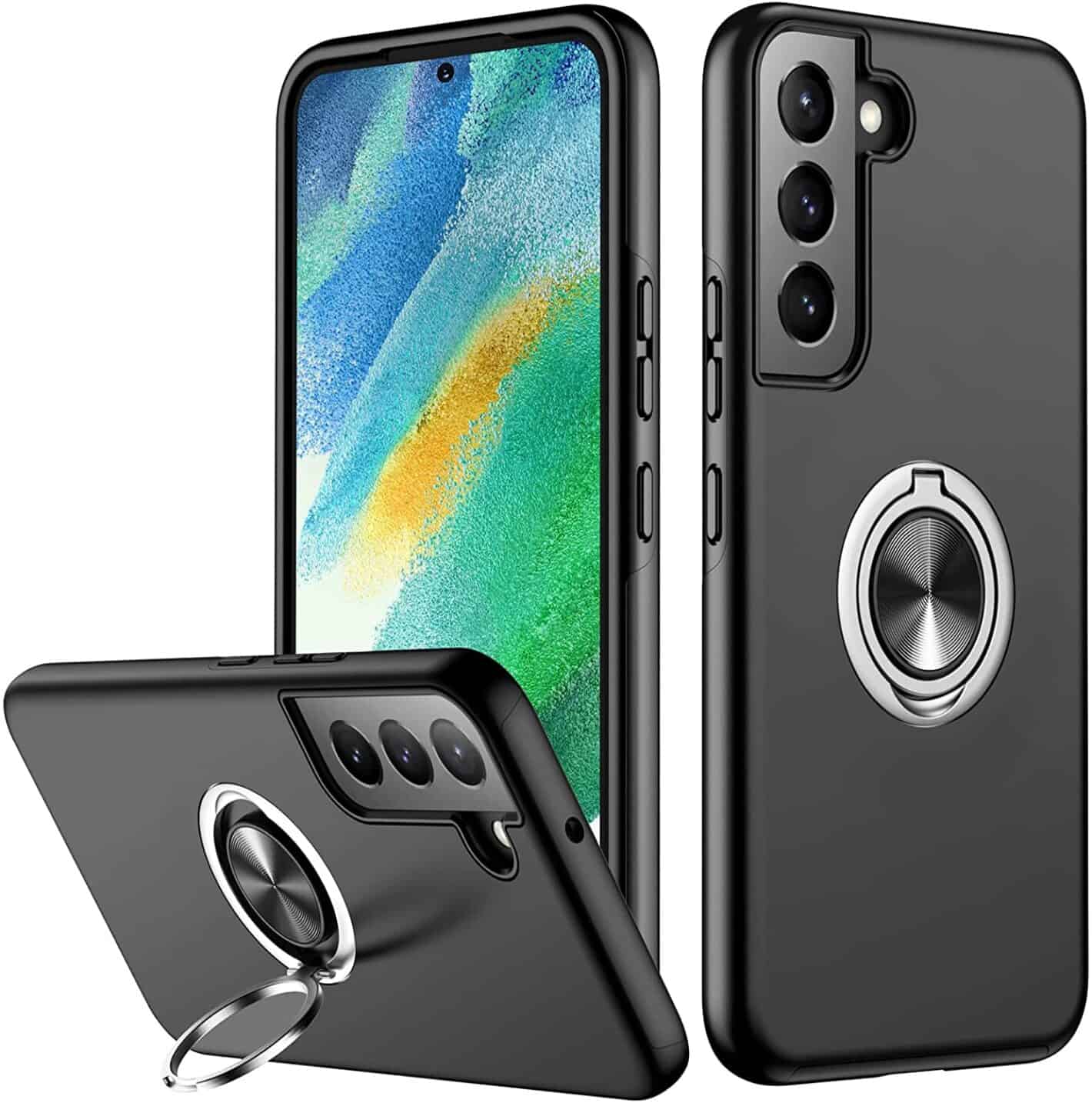 This is a pretty slick looking case for the Galaxy S22. This case from Temdan is pretty interesting. It’s a slim fit case, so it won’t add a lot of bulk. But it also has a ring on the back, making it easier to hold onto your phone. And it doubles as a kickstand. It’s also better than affixing a Popsocket to the back of your phone.

This is also a somewhat rugged case, with it being shockproof. So you can drop it, and the case will take all of the damage and not your smartphone. 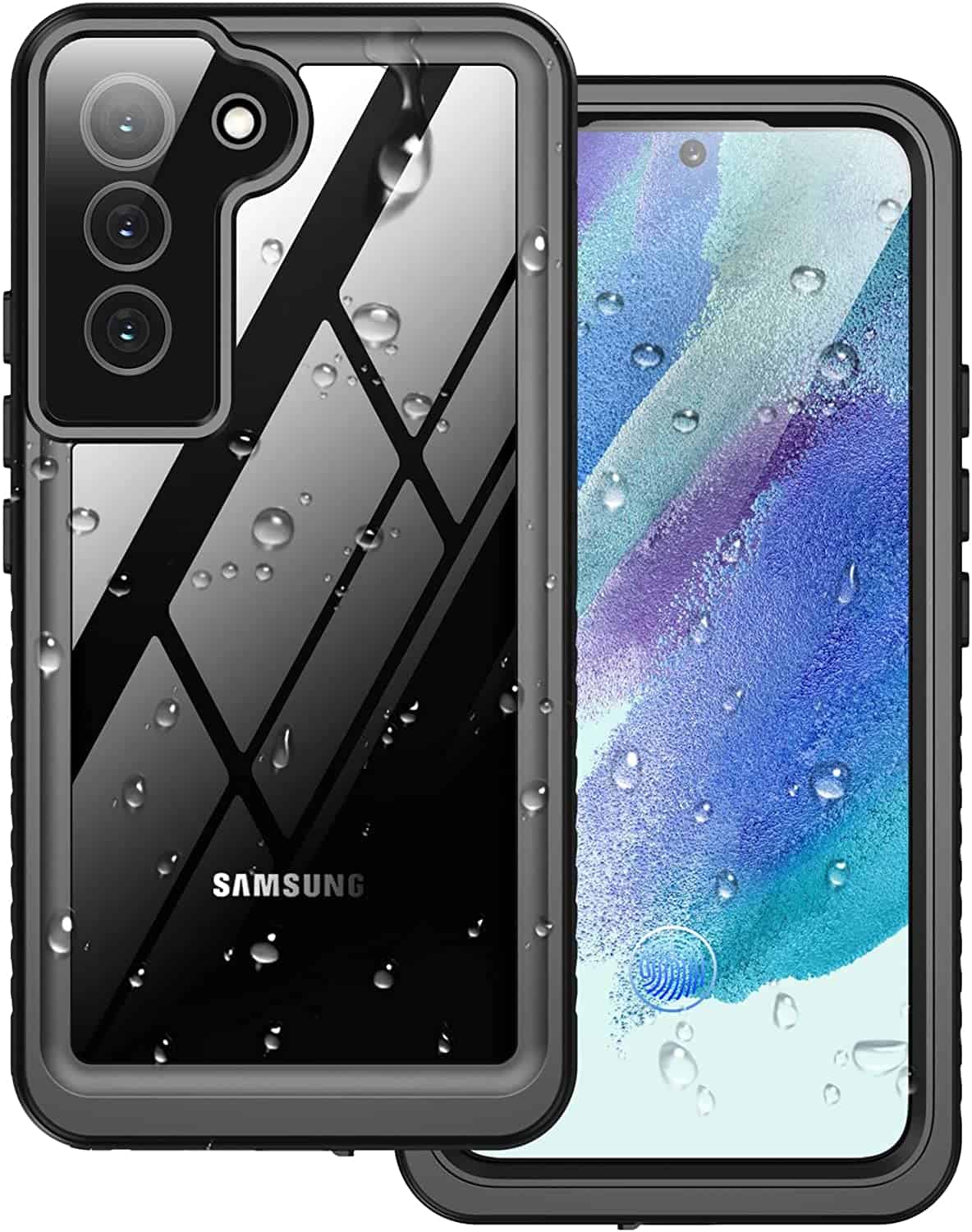 This is a clear, yet rugged smartphone case for the Galaxy S22. Which is why it has landed on our best Galaxy S22 cases list here.

It has a reinforced frame, with the back being clear. So you can still show off those impressive colorways that Samsung is offering the Galaxy S22 in. But also keep your Galaxy S22 nice and safe. It is also waterproof, which, so is the Galaxy S22. But added waterproof is not a bad thing. 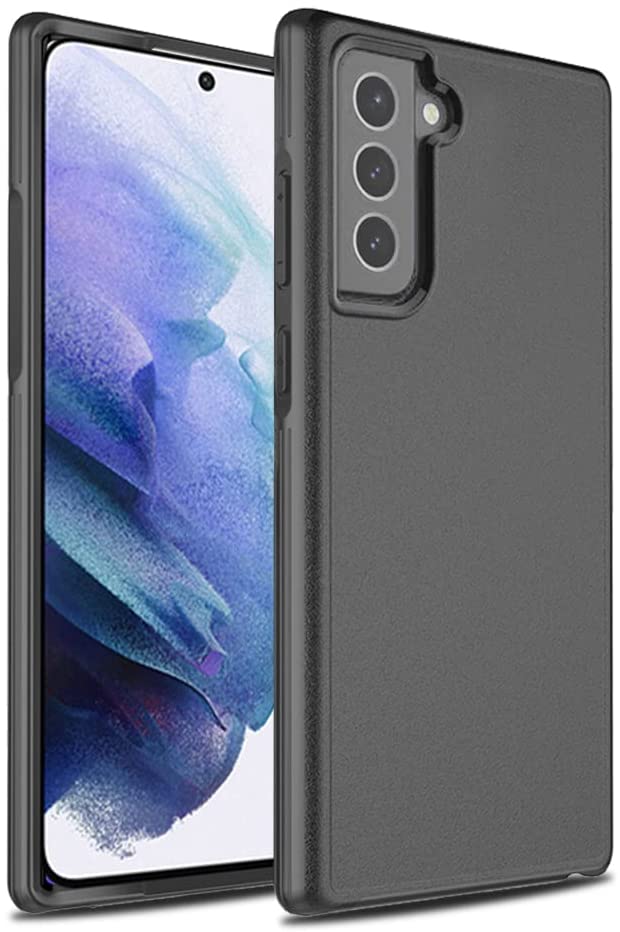 This is a pretty muted color for a Galaxy S22 case, but it is still pretty rugged. It has certification for MIL-STD drop tests. All four sides have built-in “airbags” and cushioned corners.

There is also a camera lip here, along with one for the screen. So it can keep both the screen and camera module nice and safe. 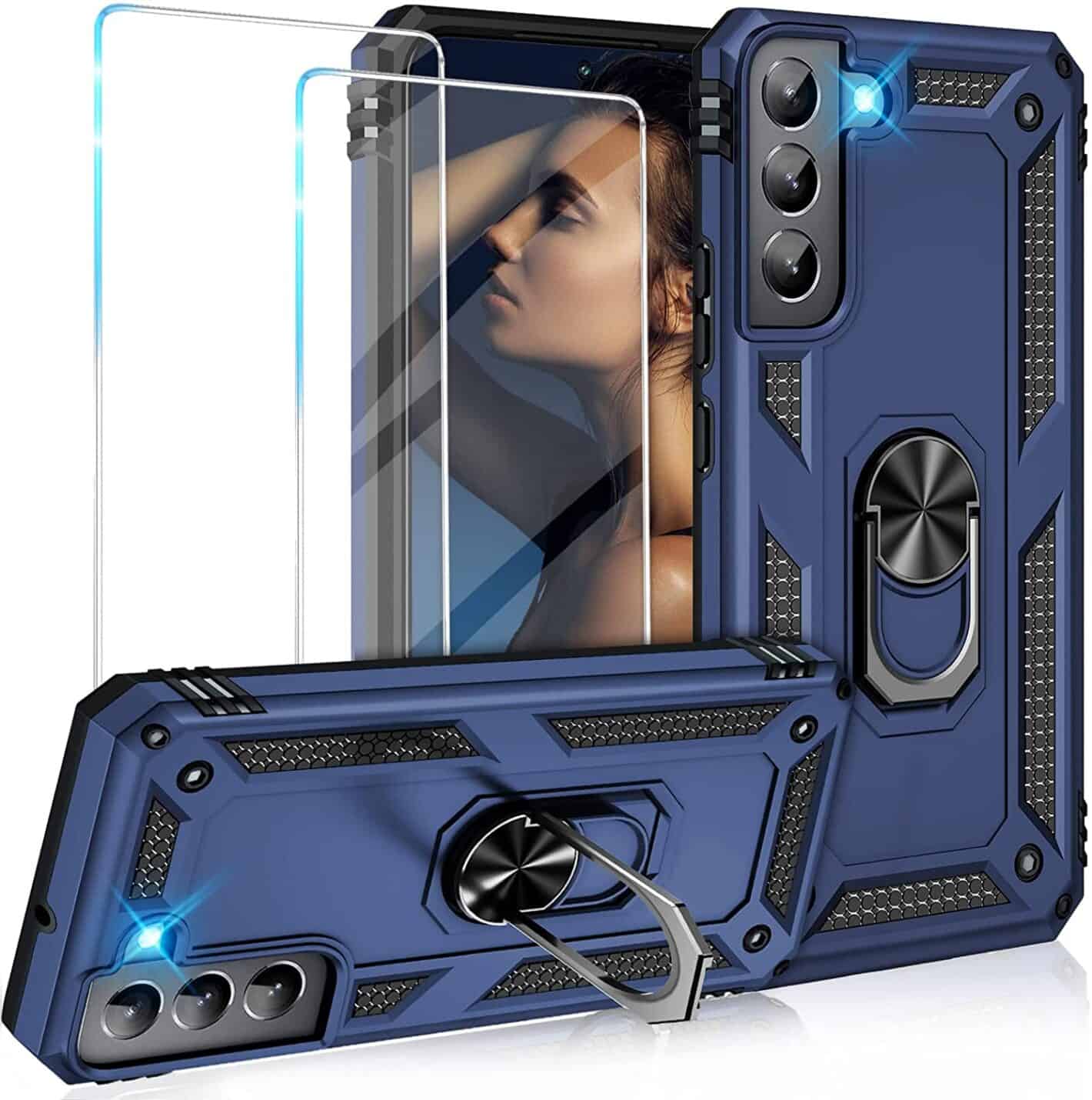 This is a great case for those that are prone to dropping their phone often. It’s a rugged case, with a lip for the screen and camera module. It is quite thick, but that’s to protect the Galaxy S22 of course. Like a lot of other cases, it has a ring on the back to help you hold onto your phone.

Finally, as an added bonus, it also includes a screen protector. So you can protect the entire phone for under $15. That’s not too shabby. 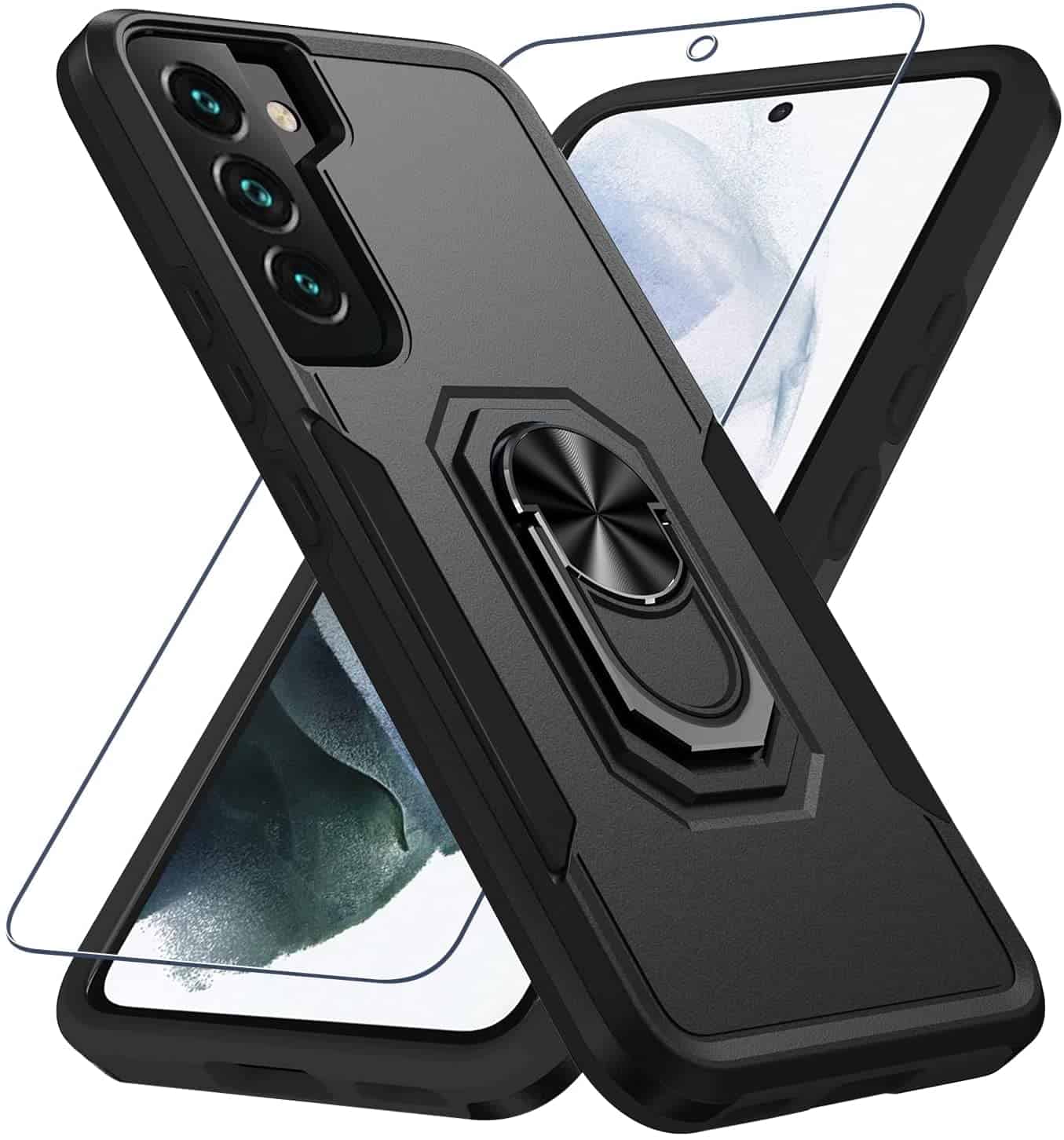 This is probably one of the best “rugged” cases for the Galaxy S22 that is on the market so far. This is a matte black finish, with reinforced corners and frame. It also has the ring on the back for holding onto the Galaxy S22. Once more, there’s metal back there, so it can just pop onto a magnetic car mount. That’s one of the more genius things we’ve seen lately, and it’s available on a lot of Galaxy S22 cases.

This one also comes with a screen protector, so you can protect your phone completely with this case. And not worry about shattering the phone at all. Which is super important. It’s a tempered glass screen protector too, so it’s not that cheap plastic stuff. This case is meant more for those that are a bit clumsy with their phones. This is a rugged case that also has a built-in kickstand, so you can stand it up and watch TikTok, or even YouTube.

Samsung offers this case in fresh lavendar, black and white. Surprisingly, it’s one their cheaper cases too.