Robot vacuums have come a long way in the past few years. No longer do you have to take out your regular vacuum to clean up what it left behind. But we also have robot vacuums at all sorts of price points. From under $100 to over $1,000. So it’s hard to gauge which of these robot vacuums are the best. Well, we have tested and reviewed a good number of robot vacuums, so we are here to help you decide on the best one you can currently buy.

There are generally three tiers of robot vacuums. The lower tier is really basic, it doesn’t even have WiFi and uses it’s own remote. The middle tier has WiFi and a compatible app, along with Google Assistant/Amazon Alexa compatibility and most likely a way to map out your home. Then there’s the higher-end tier that uses cameras to see obstacles and might even have a way to empty its own dustbin. This list of the best robot vacuums have entries from all of these tiers and ones that meet different needs.

So without further ado, here is our list of the best Robot Vacuums available right now.

Robot vacuums can be pretty fun. As you can watch it zoom around the house picking up everything and even put your cats on them for a ride too. Not to mention the fact that it means you no longer need to vacuum your floors.

But, not all robot vacuums are created equally. And not all of them are good. So here are the best robot vacuums.

The Roborock S6 Maxv is hands-down the best robot vacuum on the market today, and it’s not even the most expensive.

With the Roborock S6 Maxv, there are a few features that really make it stand out from the crowd. First up is the stereo camera on the front. This camera is used to help the S6 Maxv avoid obstacles like cords, shoes, scales and even dog poop. It also works with the LiDAR setup on the S6 Maxv to better map out your home.

It also sports some pretty powerful suction. We’re looking at 2500Pa, which is about 25% more than its predecessor and the rest of the market. So that it is not going to leave any dirt, dust or other debris on the floor.

This robot vacuum is from Anker (eufy is a sub-brand of Anker), so you already know what to expect with this one. It’s a relatively inexpensive robot vacuum, that does pretty well. Now unlike the iRobot and Roborock vacuums already listed, this one does not map out your home, or go in a specific pattern. It goes in a random pattern. Which might sound like a bad idea, but it does still do a good job at getting every inch of your home – it may just take a bit longer.

The name of this one is the RoboVac 11S, and the “S” is for slim. That is because this robot vacuum is not quite as tall as the others out there, allowing it to go under your furniture without hitting it. That might sound like a small thing, but it’s actually a big deal. As some others can’t get under your couch to clean, normally.

eufy says that the RoboVac 11S will run for about 120 minutes before it needs to head back to its dock. If it hasn’t finished cleaning before the battery starts dying, it’ll start up again once the battery is fully charged.

The Neato D7 Connected has been a fan-favorite here at Android Headlines for quite some time. We’ve been really impressed with the way the D7 Connected is able to navigate around the home. And this is thanks to it using lasers. Now it’s not the only one that uses lasers – most iRobot and Roborock vacuums do too. But this one does a better job, actually.

With the D shape, the D7 Connected is able to edge clean much better and get into all of those corners in your home. That’s actually a bigger deal than it might sound like.

This robot vacuum is perfect for those that have pets. Thanks to the extra suction here, the D7 Connected is going to be able to get all of the pet hair up and out of the carpet in your home, which is also a big deal. Especially if you are allergic to those pets, but still love them.

Robot vacuums that can empty their own dust bins, is one of the newer features that we are starting to see on robot vacuums these days. It’s a really cool feature, because you don’t need to worry about forgetting to empty it, or spilling it on the ground after it has cleaned up. iRobot was first to do this, and now it’s bringing it to even cheaper models.

With the new Roomba i3+, you get the ability to self-empty the dustbin. But you also get improved cleaning with the longer brushes and better suction.

Even though there is no LiDAR module on the top of the i3+, there is still connected mapping, as well as Amazon Alexa and Google Assistant available.

Shark isn’t a name you’re probably familiar with for robot vacuums, but they have been making vacuums for decades. And the IQ R101AE is a really good option if you want a self-emptying robot vacuum, without spending $600.

The R101AE actually backs up onto the base to empty itself. And it does it really well. It still offers up some incredible suction, and won’t miss any of the dirt, dust and other debries. It also can be controlled via your smartphone and use Amazon Alexa or Google Assistant to control it. 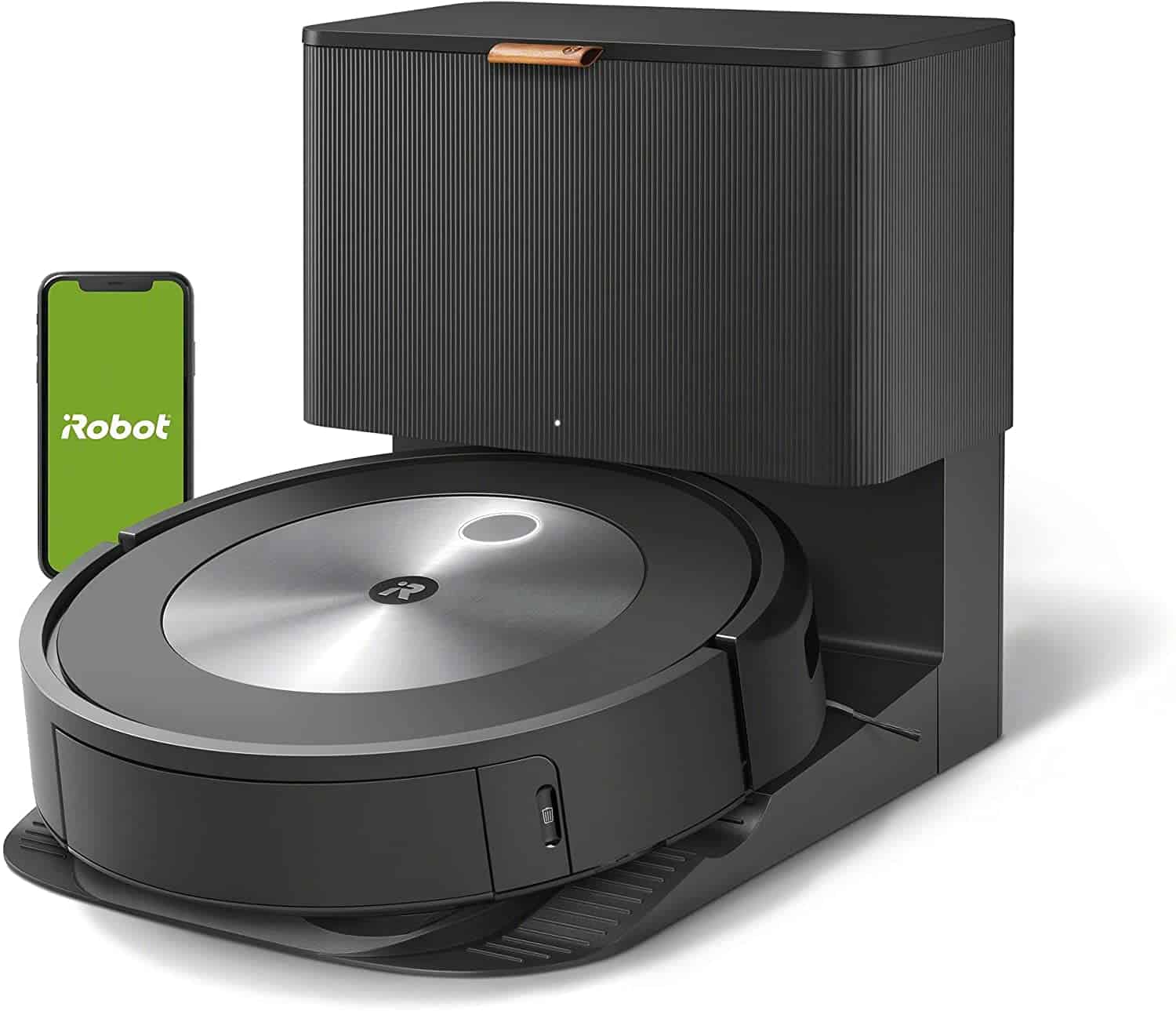 iRobot just came out with a new robot vacuum, the Roomba j7 and j7+ – the difference is the inclusion of the auto-empty dock. The new Roomba j7 uses a camera in the front, which is able to identify obstacles better, in your home. Obstacles like cords, shoes and even pet waste. In fact, iRobot is so sure that it will avoid pet waste, that it is guaranteeing that it will avoid it.

It does come with a new auto-empty dock that can still hold up to 60 days of dirt and debris. It’s a great option for hands-free cleaning, as it can empty itself and avoid other obstacles around your home.

The Ecovacs Deebot N8 Pro+ is quite the mouthful of a name, but it does quite a bit too. It takes what you already expect from Ecovacs, which is a superb cleaning experience and takes it to the next level. The Deebot N8 Pro+ has pretty powerful suction at around 2600Pa. That’s the best on the market right now, but that won’t last long.

It also has a pretty good mopping experience here. Though it does not have the Ozmo Pro mopping system. It does a good job of getting up all of the dried on messes with ease.

Most people want to spend as little as possible on something like a vacuum, but also want it to work well. And the Roborock S4 fits that bill. It’s under $300 right now, but still offers a really great experience.

It uses LiDAR to map out your home still, so it can clean everywhere without missing any spots. It offers some pretty powerful suction at 2000Pa, that’s strong enough to pick up AA batteries.

Roborock also includes the ability to do selective cleaning, so you can choose to clean a specific area, and not the entire house. Or set no-go zones.

With the Roborock S4, you’re going to get about two and a half hours of cleaning time. Before you need to recharge it. Which is pretty nice. Finally, it is compatible with the Roborock app, for automated cleaning and ability to use Amazon Alexa or Google Assistant.

This is the latest and greatest from Roborock. With the S7, the company focused more on the mopping functionality, than on previous models. And debuted a couple of new mopping features. Like VibraRise, which allows the vacuum to pick up the mop off of the ground when it is on carpet. Keeping your carpet from getting wet. And then there’s Sonic Mopping, allowing customers to get a more deep clean out of their robot vacuum.

Of course, all of the usual features are here. Including the same 2500Pa suction that the S6 MaxV has. As well as support for the Roborock app. However, the stereo camera is not available on the S7, so there’s no obstacle avoidance. Which is why we are keeping the S6 MaxV at the top of this list as the best robot vacuum that you can buy right now.

Technically, this is not a robot vacuum. But we’d thought we would include it since a lot of the mopping on these robot vacuums is just not that great.

The Braava Jet M6 on the other hand, is pretty incredible. It has a precision jet spray, which is good for getting up tough grease and other dirt off the floor. It still uses the smart mapping that other iRobot Roomba’s use, so it can run back and forth until it has cleaned the entire house.

Finally, this is really great for open spaces. Obviously, it is not something that a lot of people are going to buy, unless the majority of their house is not carpeted. If just your kitchen and bathroom are not carpet, then it’s not really worth it to buy this.