The Premier League season is in full swing at this point, and things are getting really heated up. Due to the pandemic, things are different than usual, but the games are just as good. Having said that, we’ve decided to put together a list of the very best Premier League apps for Android, to help you follow along, and enjoy the season a bit more. There are quite a few such apps available in the Play Store, so we had to pick carefully.

In the list down below, you’ll find 10 applications that may interest you. We’ve hand-picked these apps, and these are only our favorites. There are a lot of other, great apps available in the Play Store. Do note that these apps are not listed in any specific order. We did our best to include various different apps on the list, just to keep it a bit more interesting. If you’re interested in checking them out, read on.

Below is a quick overview of the top 10 best Premier League Android apps for 2021, including any download and in-app purchase costs. 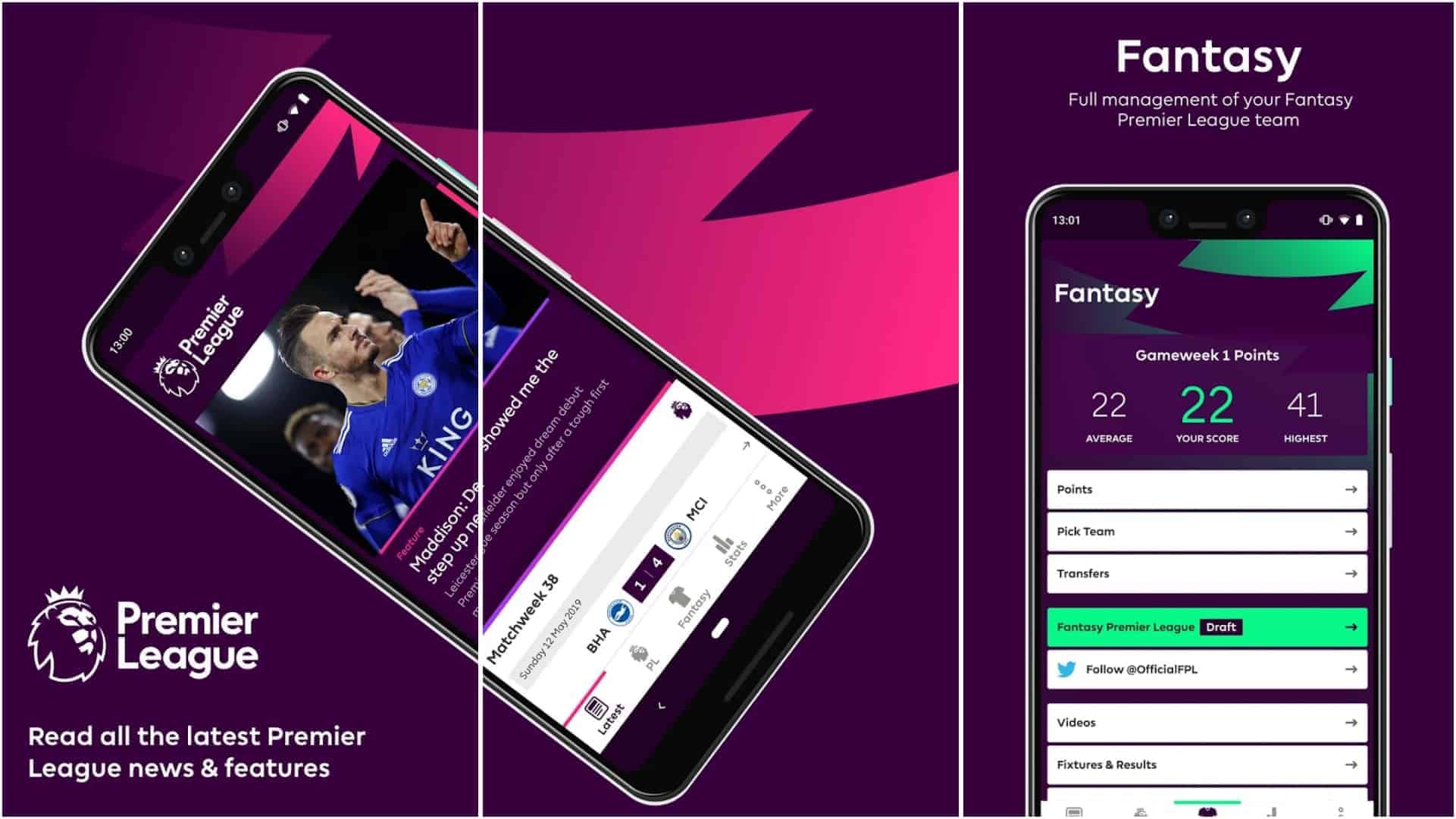 This is the official app for the Premier League. Official apps for various competitions can be really bad, to be quite honest, but this one is the complete opposite. The app is really, really good. It’s filled with useful information, its UI is really well-designed and it works great overall. You’ll find information on all teams that are playing in the Premier League, detailed information. You’ll also be able to follow along the season, check out the standings, statistics, and so on.

On top of that one of the main features of the app is the Fantasy Premier League option. You can manage your own fantasy team via this application, and compete with others. Live blogging information during Premier League matches is also available, just so you don’t miss any detail from a match. Video highlights are also included here, and the same goes for in-depth player profiles. The entire history of the competition is here as well, all the details you may need. 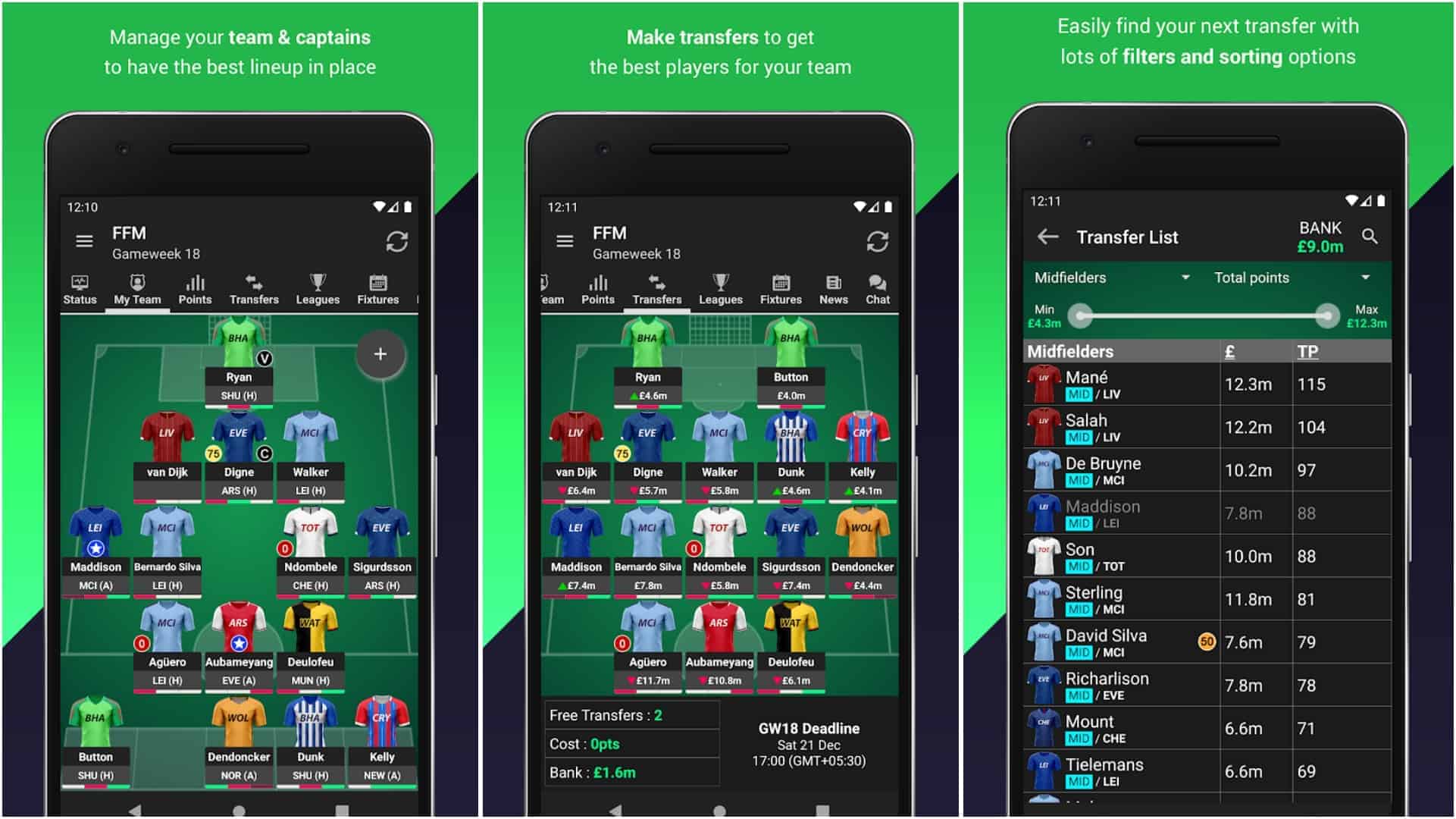 In the app, you’ll need to select your starting 11, choose your captain, and show everyone you know what you’re doing. You’ll be able to transfer players to improve your team, and you can also create your very own league if you’d like to play with friends, or something like that. As already mentioned, the UI is great, even though it’s a bit dated. Still, it works really well, and there’s nothing to complain about in that regard. 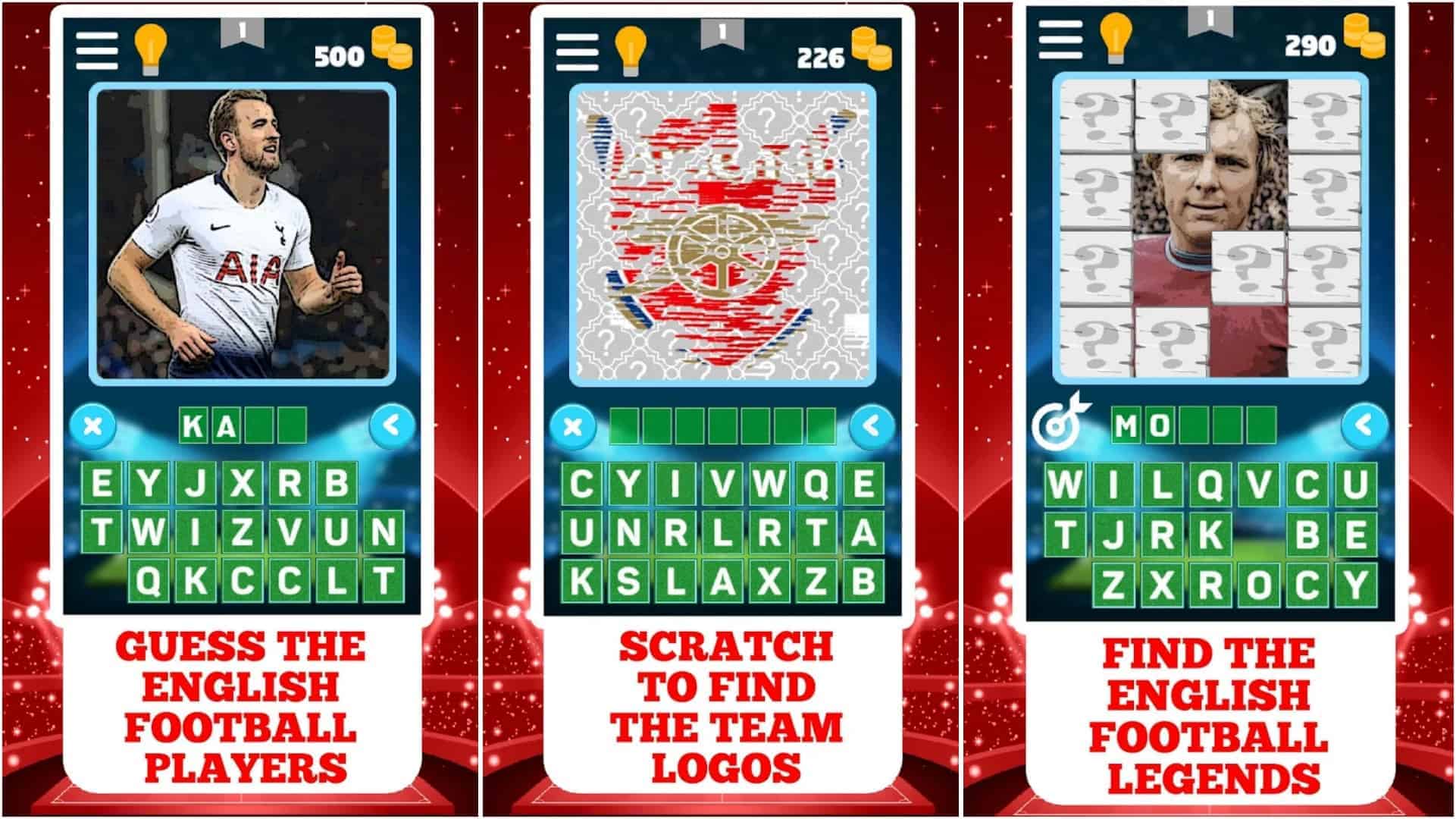 If trivia is your thing, and you know a lot about the Premier League, this is the app for you. In it, you’ll be asked to guess the names of players, managers, teams, stadiums, and so on. You’ll be quizzed on various facts from the Premier League. There are a lot of questions available here, and the app will truly test your knowledge. Up to this point, only two out of 100 players managed to answer all questions correctly, according to the developer.

One thing to note, however, is that the app is not limited entirely to the Premier League. Lower-level competitions are also here, including the Championship, Football League One, and Two. There are over 800 pictures included in the app, and levels get more difficult as you progress. They’re extremely easy at first. You can also test your knowledge across several game modes, modes like ‘BET THE FACT’ and ‘Erase the LOGOS’. 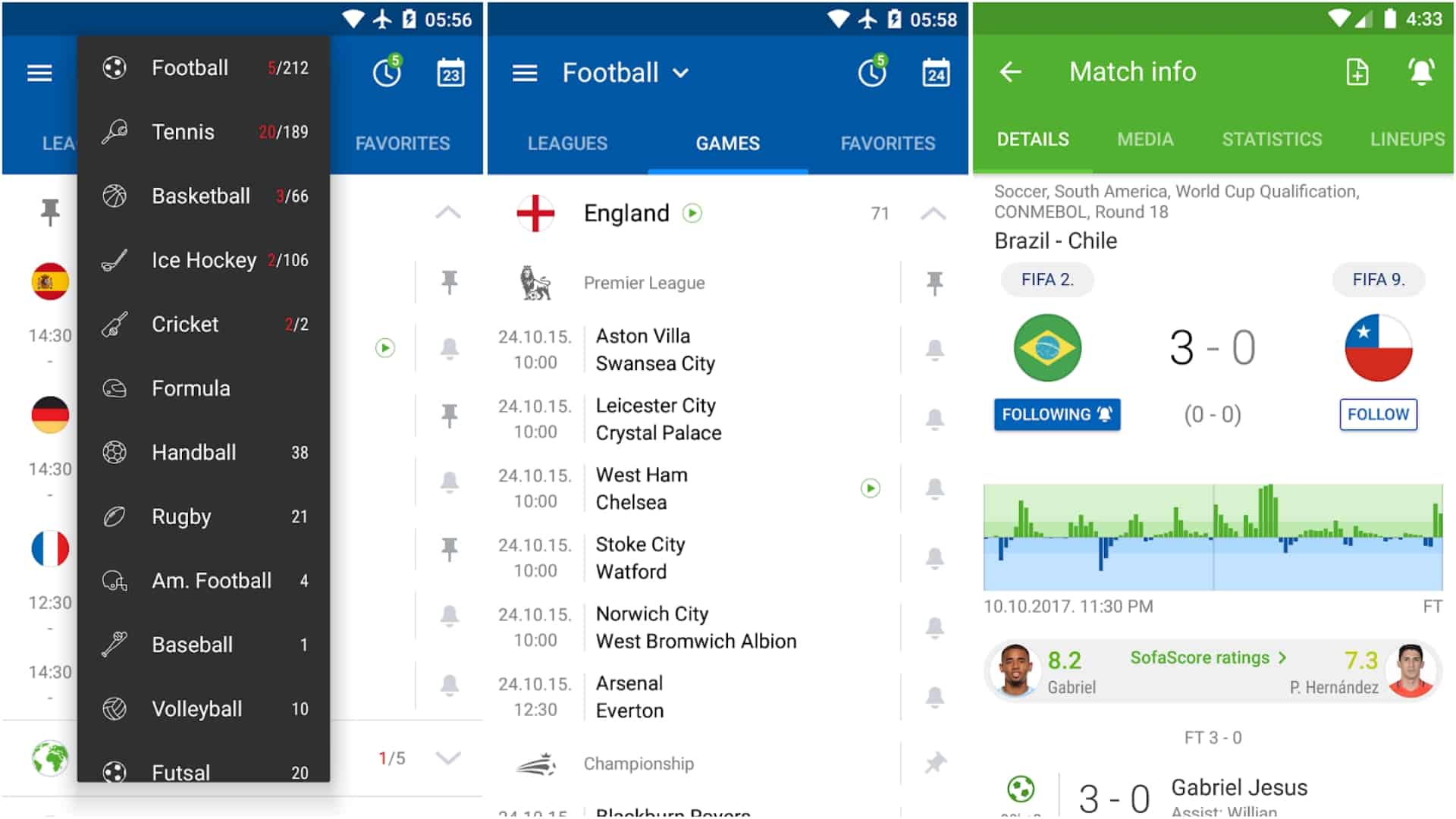 SofaScore is easily one of the best live score applications for Android. This app is immensely popular in the Play Store, and highly-rated as well. The sports that you can follow via the app are not limited to the Premier League or soccer in general, there are various sports that you can tune in to. The support for the Premier League is really good, though, as there are tons of details here.

You can follow the standings, match results, detailed team and player statistics, and more. News are also included in the app, and so are highlights. You can check out the goals that were scored in any given match, those highlights are usually uploaded soon after a goal is scored. The performance of the app is stellar, it works great, and you can choose between light and dark modes as well. 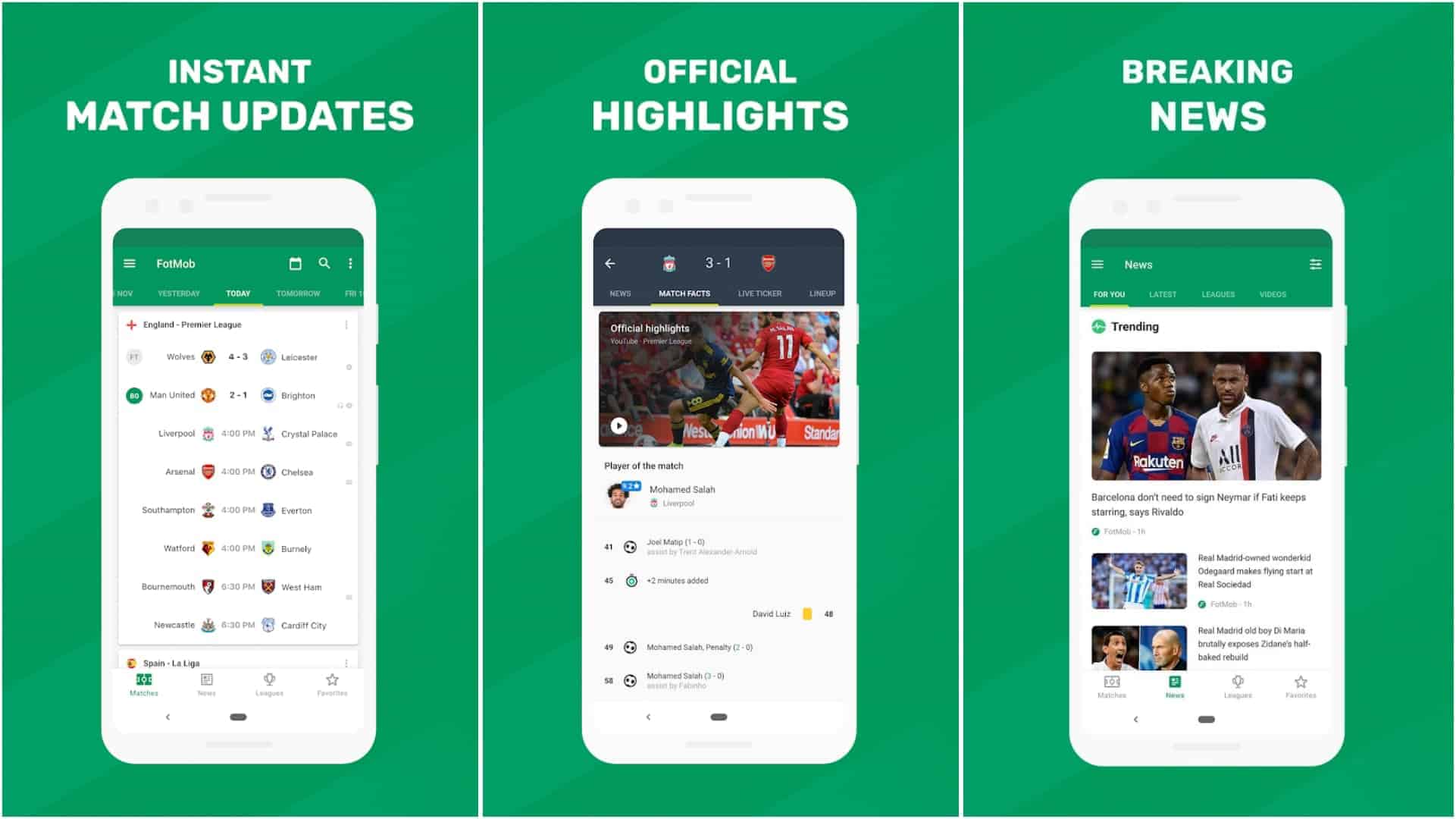 FotMob app provides direct competition to SofaScore. This is another great livescore app that does so much more than just provide you with results. This app is limited to soccer, though, so keep that in mind. The UI design here is excellent, to say the least. It’s modern, intuitive, and a joy to use. The app will provide you with instant match updates, and it allows you to highlight your favorite teams.

The dark mode is supported in this application while official highlights are also included. Much like SofaScore, this app also delivers the latest news to your smartphone. Those news will be curated, depending on your interests. Detailed statistics are also included, both team and player stats, while you can also access audio commentary for some matches… in more than 10 languages. 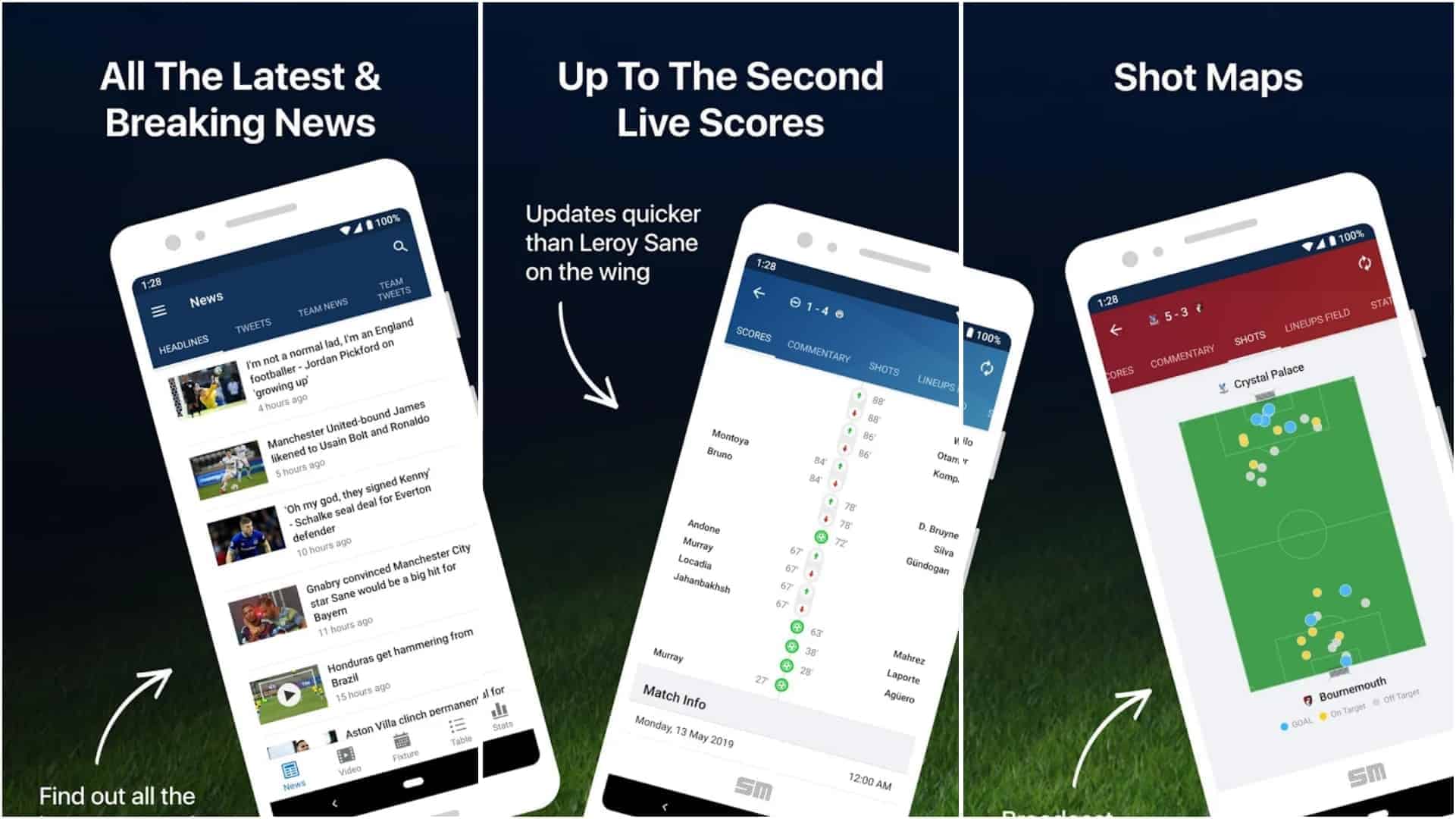 EPL Live is a rather interesting app. Its name may get you to think this app is solely focused on the Premier League, but that’s not the case. It includes other big soccer competitions in Europe, including the Champions League, Europe League, Spanish La Liga, German Bundesliga, and so on. This app will provide you with the latest news from all of those competitions, and much more than that.

You’ll be able to access transfer updates from the app, and also get instant goal alerts for matches you want to follow. Detailed match statistics is also included, there are a lot of stats that you can check out. Play-by-play match commentary is available, and the same goes for standings for each league. The design of the app is modern, it’s flat and the app is easy to use, there’s not much to complain about here. 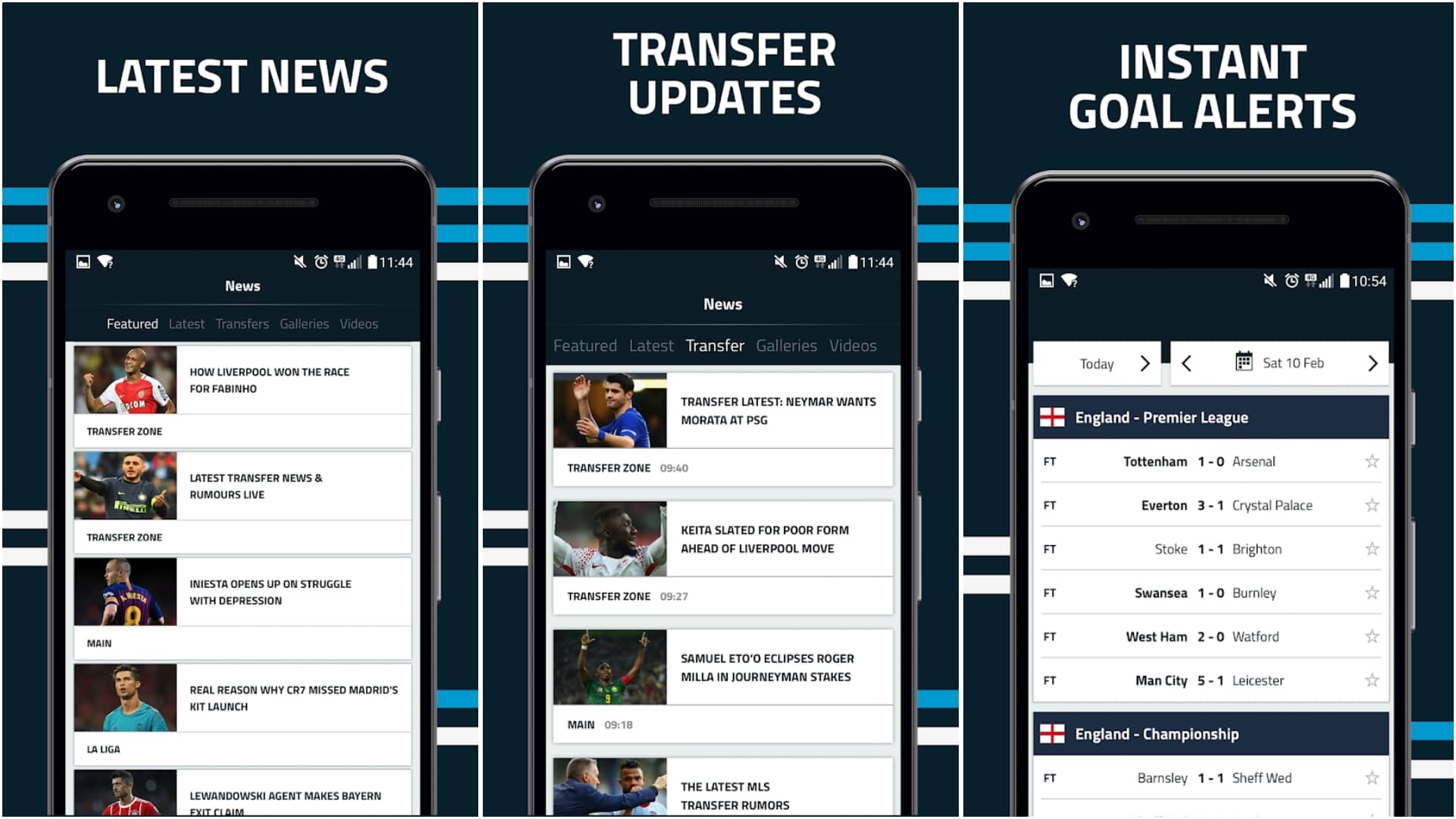 Those of you who are into soccer have probably heard of Goal.com. Well, this is the company’s official application, and it’s really good. Goal.com is filled with great soccer-related articles, and can be your one source for news. The app’s UI is very nice, and easily recognizable, the company has a rather unique style when it comes to design. The content is well-written, and there are tons of news published on a daily basis.

If you’re only interested in the latest transfer information, you can access that part of the app only. This app can also provide you with instant goal alerts, even though there’s a separate app for live score purposes published by the company. You can also check head-to-head match data via this application, and the same goes for detailed match statistics. It’s quite a versatile application. 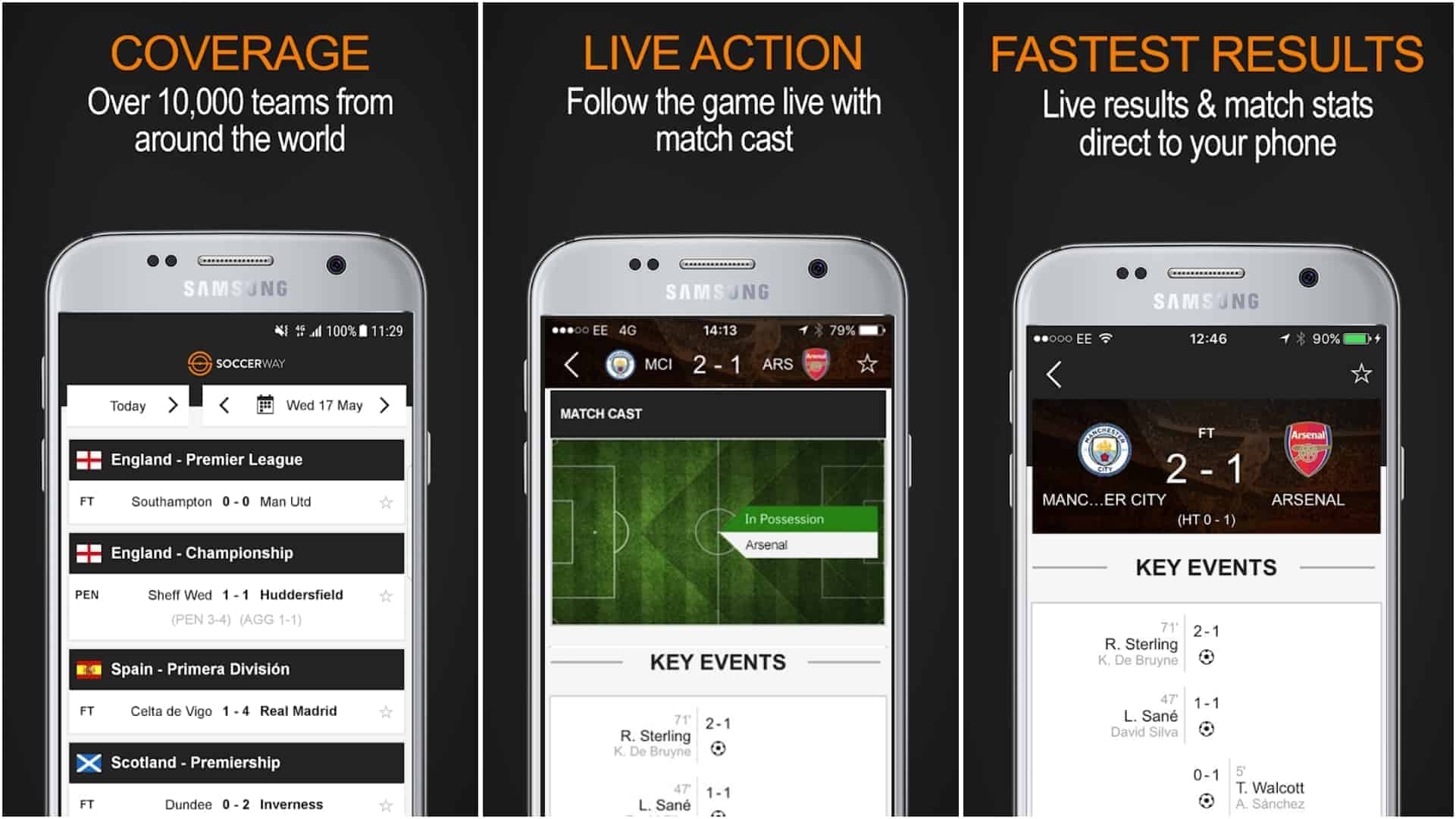 Soccerway covers the Premier League extensively, but it’s not solely focused on it. This app covers various different soccer competitions in addition to the Premier League. The app officially covers over 10,000 teams from all over the globe. It also allows you to follow a particular game live, with match cast included. You’ll get live results, and match stats here, just like you would in a regular live score app.

You can also create personalized feeds, which will only highlight matches / teams you’re interested in. The same goes for competitions, actually, you only need to select the ones that interest you. Soccerway is so sure in its service, that it suggests you should not use it if you’re watching a match live, as chances are you’ll get information via the app sooner than you would if you watch it live. It’s definitely an app worth checking out.

theScore is one of the best-designed applications on this list. In fact, the developer pushed an update recently (close to the time of writing this article), which improves the design even further. The app’s content is now even easier to read, as UI elements have been adapted. The app’s performance has also been improved, while the app’s install file is not 50-percent smaller than it used to be.

This app works great, to say the least. It allows you to follow tons of competitions / sports, depending on your preferences. You can set up your personalized feed as well, for specific players, teams, or leagues. The app will also deliver news to your smartphone fast. On top of everything, theScore also comes with a ‘Chat & Messaging’ feature. That allows you to talk to other people with the same interests, other supporters of the same club, for example.

eFootball PES 2021 is easily one of the best soccer / football games on Android. The graphics in this game is excellent, considering this is a smartphone game we’re talking about. The game is also trying to be as realistic as possible. There are a number of modes that you can try out in the game, and if you prefer playing online instead of by yourself, that option is also available, all you’ll need is an Internet connection.

If you prefer playing against your friends in a local match, that option is also available. eFootball PES 2021 is easily one of the best soccer simulations available on Android. If that is something you’re interested in, this game is worth trying out. It is worth noting that the game does come with in-app purchases, though many other apps from this list do as well. Regardless, this game is worth trying out.