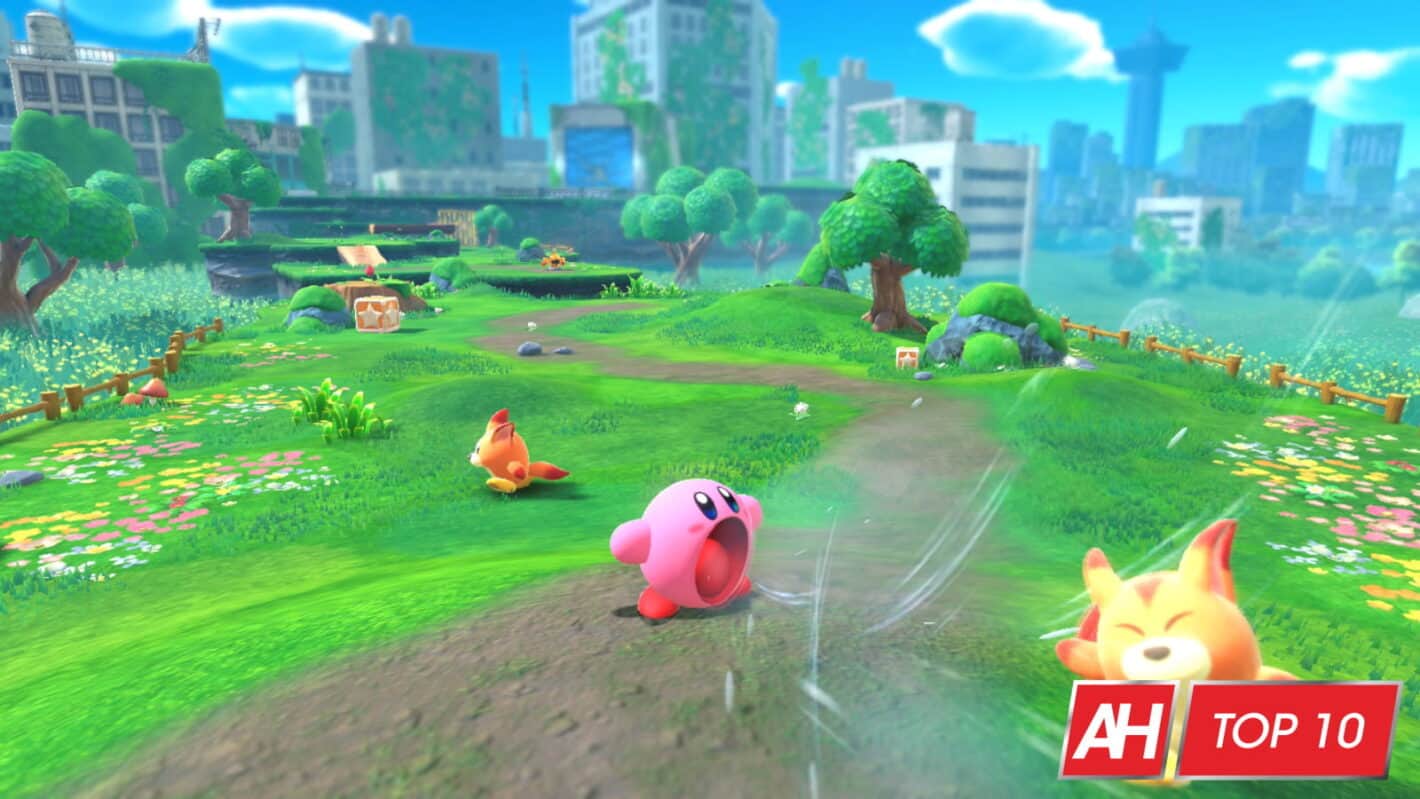 The Nintendo Switch has some of the best games across any platform for both casual and hardcore gamers. And if you’ve been around long enough to remember older Nintendo consoles or you’ve just been enthralled with Nintendo’s offerings at any point, then you already know how good the Switch can be.

As a portable gaming console, it’s one of the coolest and most popular platforms around. But it gets even better because it can be docked at home and used as a home gaming console too. Now that the Switch has been out for more than a few years, it’s racked up a sizeable collection of games. But which are the best Nintendo Switch games to sink your teeth into? If you’re new to the Switch and are looking for titles to start your adventures, this guide can serve as a handy introduction to what’s on offer.

And at the very least it can be a good jumping off point into the discovery of Nintendo’s collection of great games for the Switch. Keep in mind that there are many more awesome games for Switch than what’s listed here. These are just some of the best ones to start with.

The latest game in the Metroid franchise is one of the best games on Nintendo Switch, and also one of the best Metroid games. Take control of Samus Aran as she explores the depths of Planet ZDR.

Like Metroid games of the past, Metroid Dread puts you in the shoes of Samus from a side-scrolling perspective. Samus has a new suit which you can upgrade with all-new powerful abilities and weaponry. Which you’ll need if you’re going to get past some of the game’s tougher bosses, and find your way through some of its more challenging roadblocks.

You’ll also have to do all of this while trying to avoid getting caught by dangerous killer robots called E.M.M.I. that inhabit the planet. As Metroid games go, Metroid Dread has a more sinister feel to it. Which adds to the game’s allure. Especially if you’re someone who appreciate elements of high-tension moments in video games.

The Legend Of Zelda: Breath Of The Wild

And for some, it’s the best Nintendo Switch game of all. This latest installment in the franchise (which is due to have a sequel that hopefully launches in 2023) is the first game where you can control Link in a vast open world setting. Taking the Zelda franchise to places it’s never been before.

Face off against new and familiar foes while exploring the kingdom of Hyrule in a way you’ve never seen. If you’ve not already played this game, that is.

The Legend Of Zelda: Breath Of The Wild

Mario Kart is a time-honored tradition among Nintendo fans and Mario Kart 8 Deluxe is the best of the best. While there’s always going to be a place for the original thanks to nostalgia, Mario Kart 8 Deluxe adds all kinds of new features and elements. There’s new racers, new karts, new powerups, new tracks, and of course online play.

If you like Kart racing games, then this is a must-have title for the Nintendo Switch. And although it is fun to play solo, it’s best when played with friends. Just don’t let the chaos of being hit by a Blue Shell escalate things.

Kirby And The Forgotten Land

Kirby And The Forgotten Land is the newest game on this list, and like Breath Of The Wild, transports the Kirby franchise to new places in a way gamers have never experienced. While not truly open world, levels and settings are larger and more expansive than ever before.

Help Kirby explore the remnants of a past civilization that appears to be, a once human inhabited planet. Maybe Earth? But I digress. Kirby And The Forgotten Land is a new adventure with 3D stages, new enemies, new abilities you can give to Kirby and new puzzles to solve.

Kirby And The Forgotten Land

Shin Megami Tensei V is the game for anyone looking for a great JRPG experience on the Nintendo Switch, and it’s one of our picks for the best games to check out on the platform. This isn’t the only JRPG on the Switch of course. There are plenty. Plenty of good ones at that. But we’re starting here because this game comes from ATLUS, the same company behind the Persona series. Which is also a great set of games.

In Shin Megami Tensei V, you will play the role of a high school teenager who mysteriously gets transported to an alternate reality version of Tokyo that’s been destroyed. It’s fraught with enemies and you have no way to defend yourself. You’re a high school student, after all. Through perhaps sheer luck, you’re saved by a powerful entity called an Aogami who merges with your body. Giving you superhuman abilities.

With your newfound power, you must find a way to save the world from destruction. As a JRPG, Shin Megami Tensei V uses a turn-based battle system like many in the genre. It’s also quite lengthy with over 80 hours of play time. So sit down, get comfy, and enjoy the ride with this one.

If you tend to be competitive then you may have your work cut out for you when facing off against your foes in this one. With so many different playable characters, that’s a lot of different move sets to memorize and master. But that doesn’t take away from how cool the game is and how much fun it can be to play with friends.

The really cool thing about Super Smash Bros. Ultimate though is the inclusion of characters from games that aren’t Nintendo titles. Like Mega-Man, Sonic, or Cloud and Sephiroth from Final Fantasy VII. Whether you like to get super technical and flex your skills or just like a casual few rounds with friends now and again, this is an awesome title to grab for the Switch.

This is the game for the ultra casual gameplay that you may have been looking for. Animal Crossing: New Horizons is a social simulation game where you can create your own paradise island and decorate just about every single aspect of it.

It’s great for winding down after a long day at work or relaxing during a Saturday or Sunday morning as you sip your coffee and cozy up on the couch. There are almost no limits here. You can craft all kinds of stuff and interact with other players and friends. Visit their islands or invite them to yours, and you can even collect resources and grow crops or catch bugs and fish.

The game even has a dynamic weather system that adjusts based on the player’s actual location. Which is a pretty neat feature if we say so ourselves.

This is another JRPG title and interestingly enough, it’s also made by ATLUS. On top of that, the game is a crossover between Shin Megami Tensei and Fire Emblem. The game is set in modern-day Tokyo, and players will take on the role of Talent Agency members who are caught in the middle of a conflict due to evil threats invading the city.

Players will need to work together with allies called Mirages to fight against evils of the same name. Saving Tokyo before everyone is doomed.

Video games are fun but that doesn’t mean they can’t also be good for your health. Ring Fit Adventure aims to bring a little bit of that mentality to your video game experience. By providing you with a fun way to exercise while you play. It’s filled with a vast amount of different exercises that you will end up doing as you progress through the game’s cheeky story.

At certain points throughout the game you’ll need to use abilities called Fit Skills to attack enemies during battles. Most or all of your actions are controlled with body movements. Making for a really cool way to work fitness into your daily lifestyle.

At this point there are so many Super Mario games it might seem like it’s hard to keep track of them all. And we wouldn’t blame you if that was the case. But if there’s on Mario game for the Nintendo Switch you should check out it’s Super Mario Odyssey, as this is not only one of the best games for the platform but it’s one of the coolest Mario games around.

Explore all new areas like a metropolitan city, while venturing to defeat Bowser before he can marry Princess Peach in an unwanted wedding. In this game Mario also has help from his friend Cappy, who he can use to take over enemies and control them. You can also use Cappy to traverse parts of the landscape you couldn’t otherwise get to by yourself.