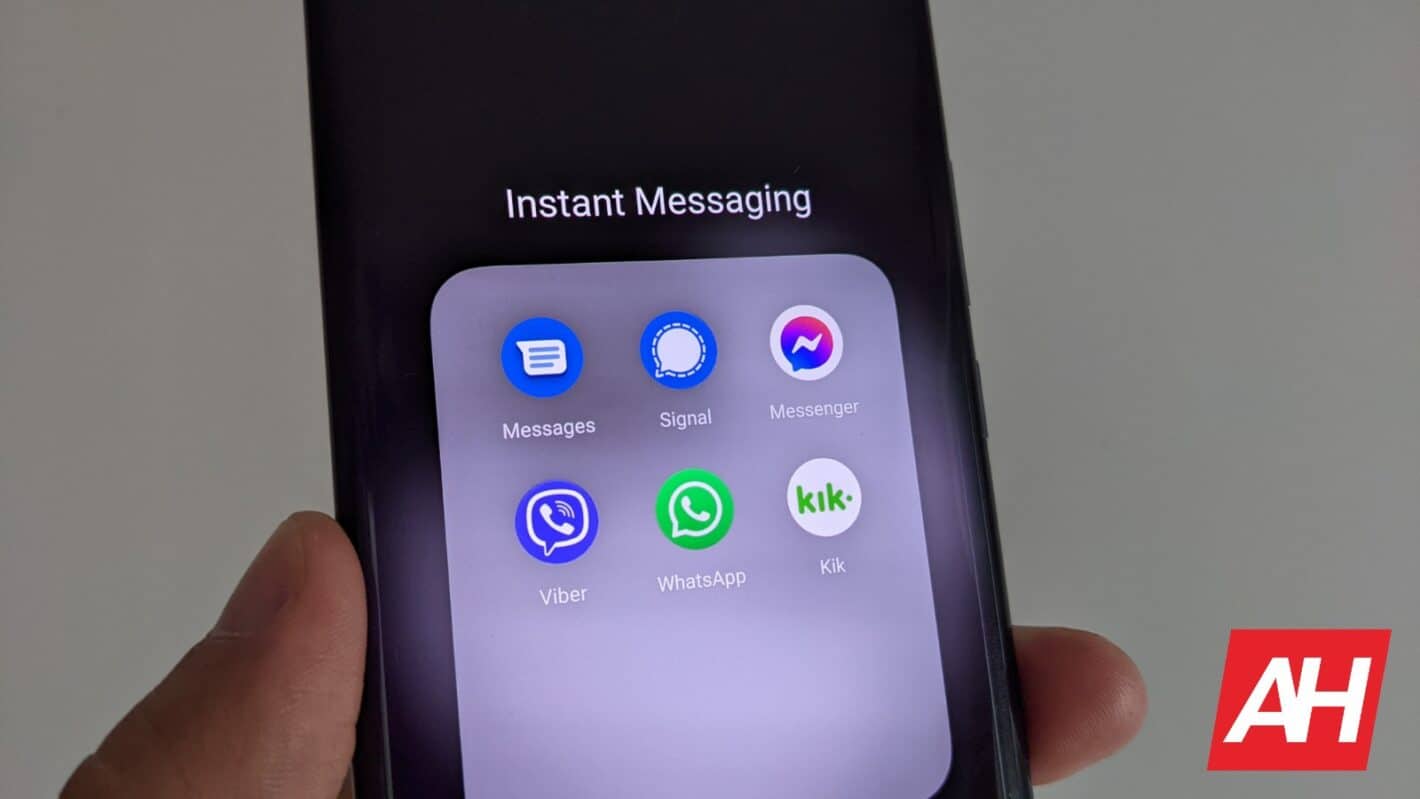 There are a lot of instant messaging apps available these days, and we’re here to check out some of the best ones. Instant messaging became normal a long time ago, and not that many people use SMS anymore. We’re constantly connected to the Internet with our smartphones, which makes sending messages a breeze. Unlike SMS messages, you can send images, videos, voice messages, stickers, GIFs, and so much more.

Below is a quick overview of the top 10 best Instant Messaging Android apps for 2022, including any download and in-app purchase costs. 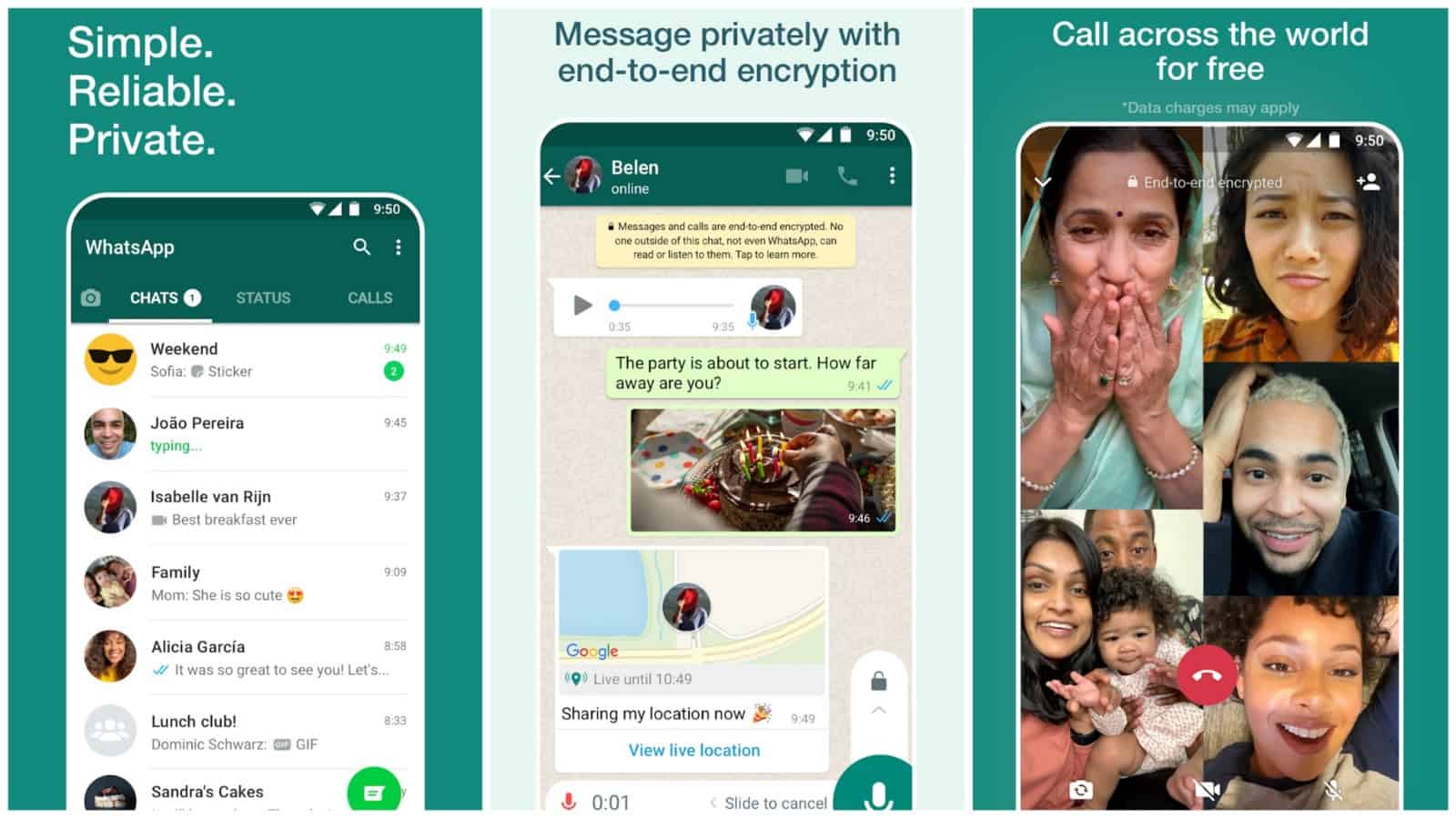 WhatsApp is one of the most popular Instant Messaging apps on the planet. It has over 5 billion downloads in the Play Store. This is Facebook’s app, by the way, as WhatsApp got acquired by Facebook a while back. You’ll need a phone number in order to activate the app, as that’s how it works. The same goes for a number of other apps on the list, like Viber, for example.

This app allows you to send messages via the Internet, and that goes for both text and audio messages. You can also make voice or video calls via this app, while group chats and calls are also supported. Stickers are supported by the app, and the same goes for GIF files. The app usually works quite reliably, and it’s available on quite a few OS’, while it’s completely free to use. 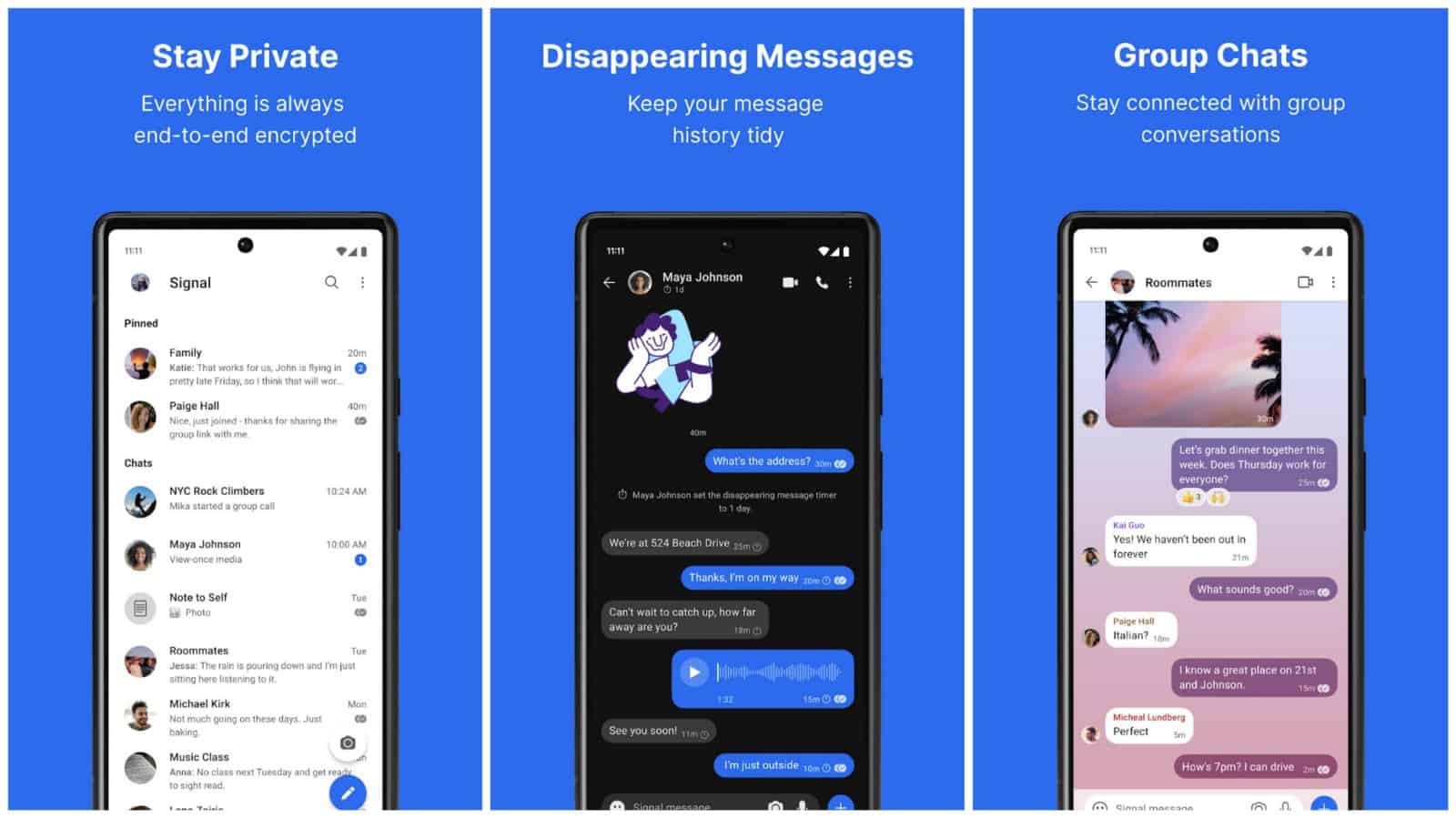 Signal is one of the most secure messaging platforms on the list, if not the most secure one. Not only is everything end-to-end encrypted here, but Signal is also an open source app, so the code is available for inspection. Signal has steadily been gaining popularity, though it’s still in Telegram’s shadow, kind of. That may change down the line, though, as Signal really does have a lot to offer.

The UI design of the app is simple, but also great at the same time. The dark mode is available here, while the app has a lot of features, similar to other apps on the list. It allows you to send both messages, initiate voice or video calls, and more. You can send stickers via this application, and the same goes for GIFs. You won’t see any ads here, the same goes for trackers. 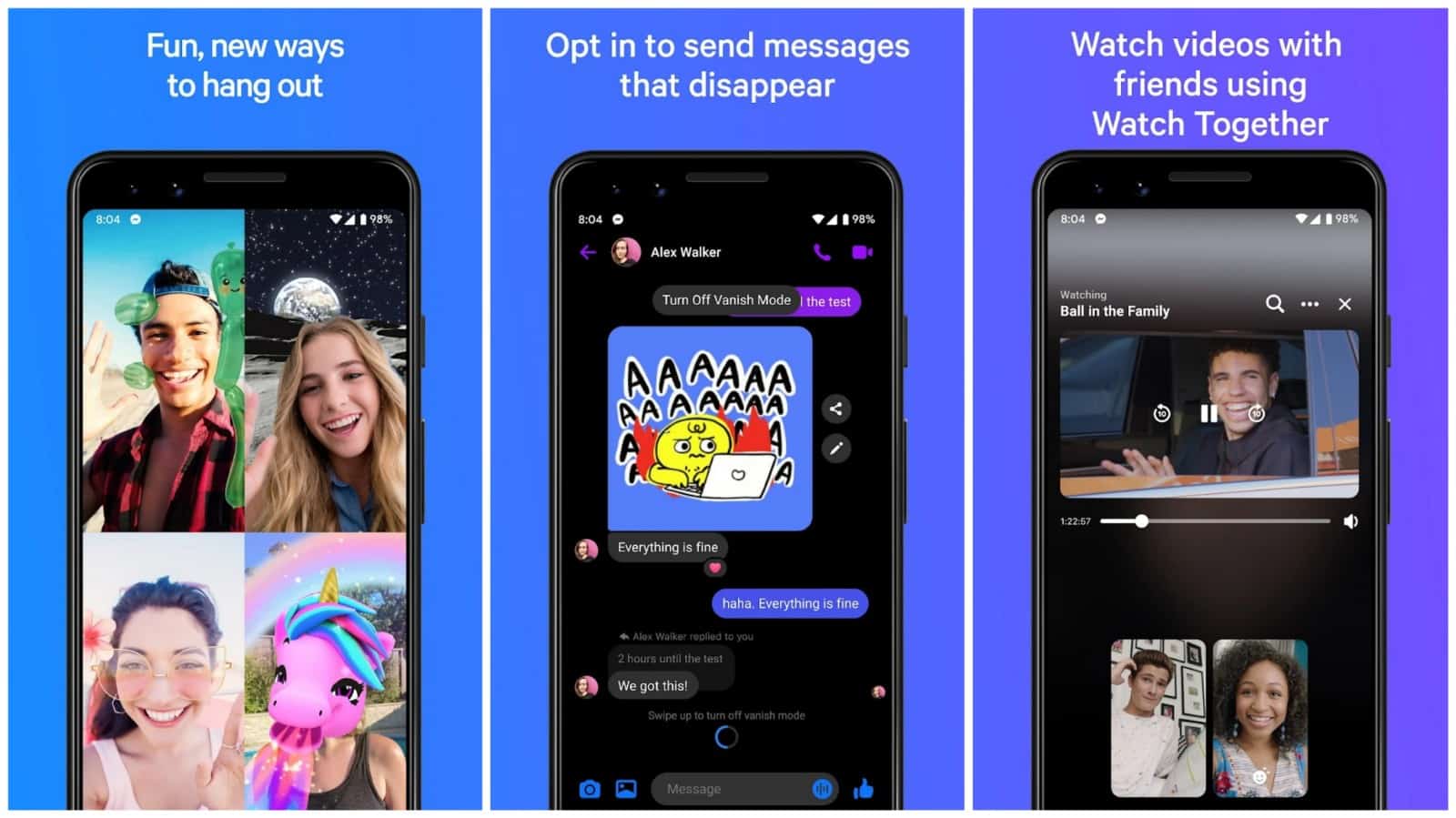 The app not only allows you to send text and voice messages, but you can also initiate voice and video calls here. You can be involved in video chats or calls, while themes are also supported by the app. Sending GIFs is not a problem here, and the same goes for sharing stickers. Custom stickers can be found in the store within the app. Dark mode is supported, and so are secret chats, amongst other things. 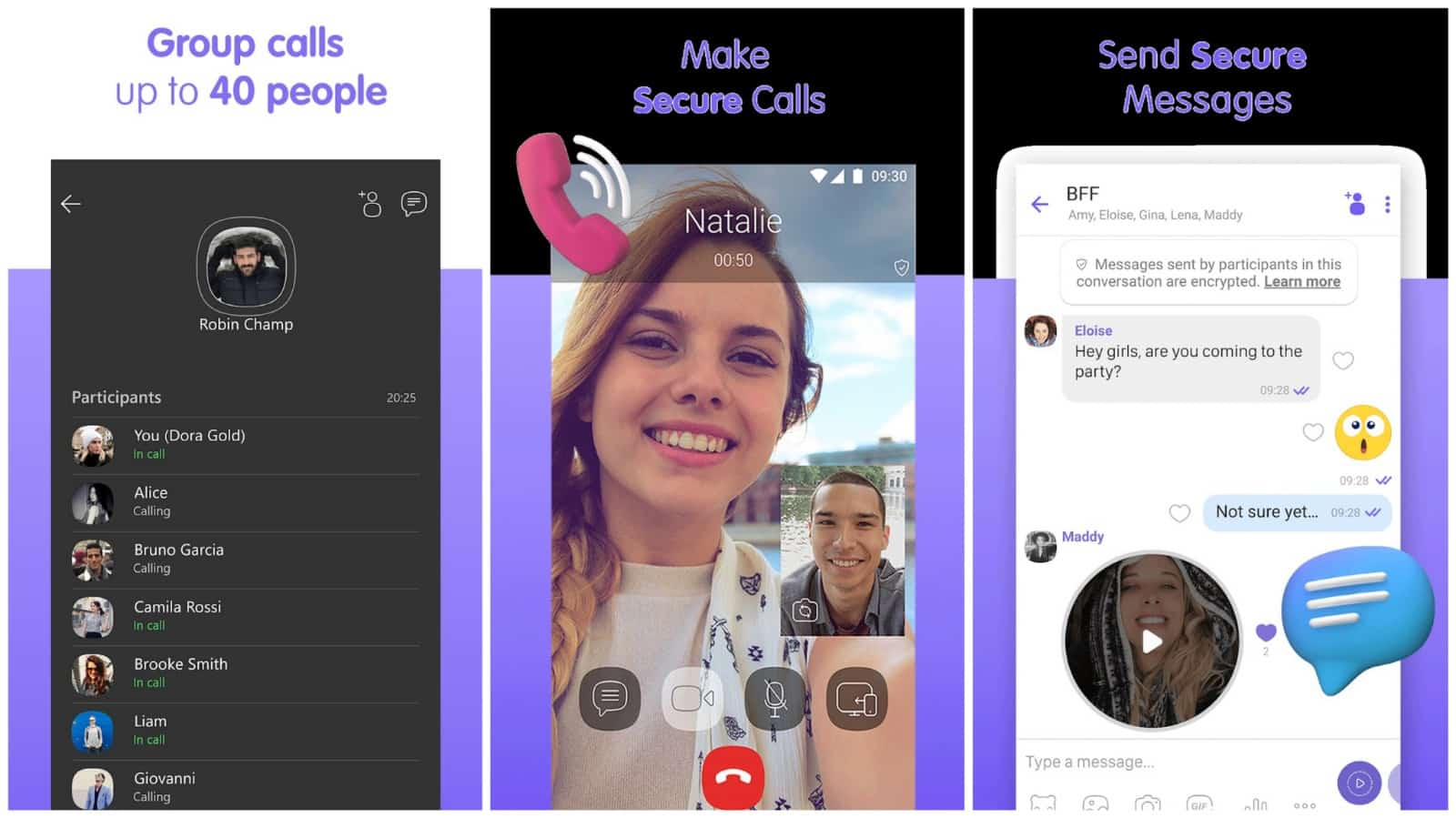 Very few people haven’t heard of Viber. This is an extremely popular app, globally, though it’s used more in some markets than others, of course. The app has been downloaded over a billion times, and it does also come in a web version. This app offers end-to-end encryption for all 1-on-1 calls, chats, and group chats, by default. In other words, not even Viber can read your messages.

You can also be included in voice and video calls via Viber, with up to 50 people in a single call. Sending text and voice messages is possible, and the same goes for stickers and GIFs. You can create polls on the app, and do so much more. Self-destructing messages are also one of the app’s features. 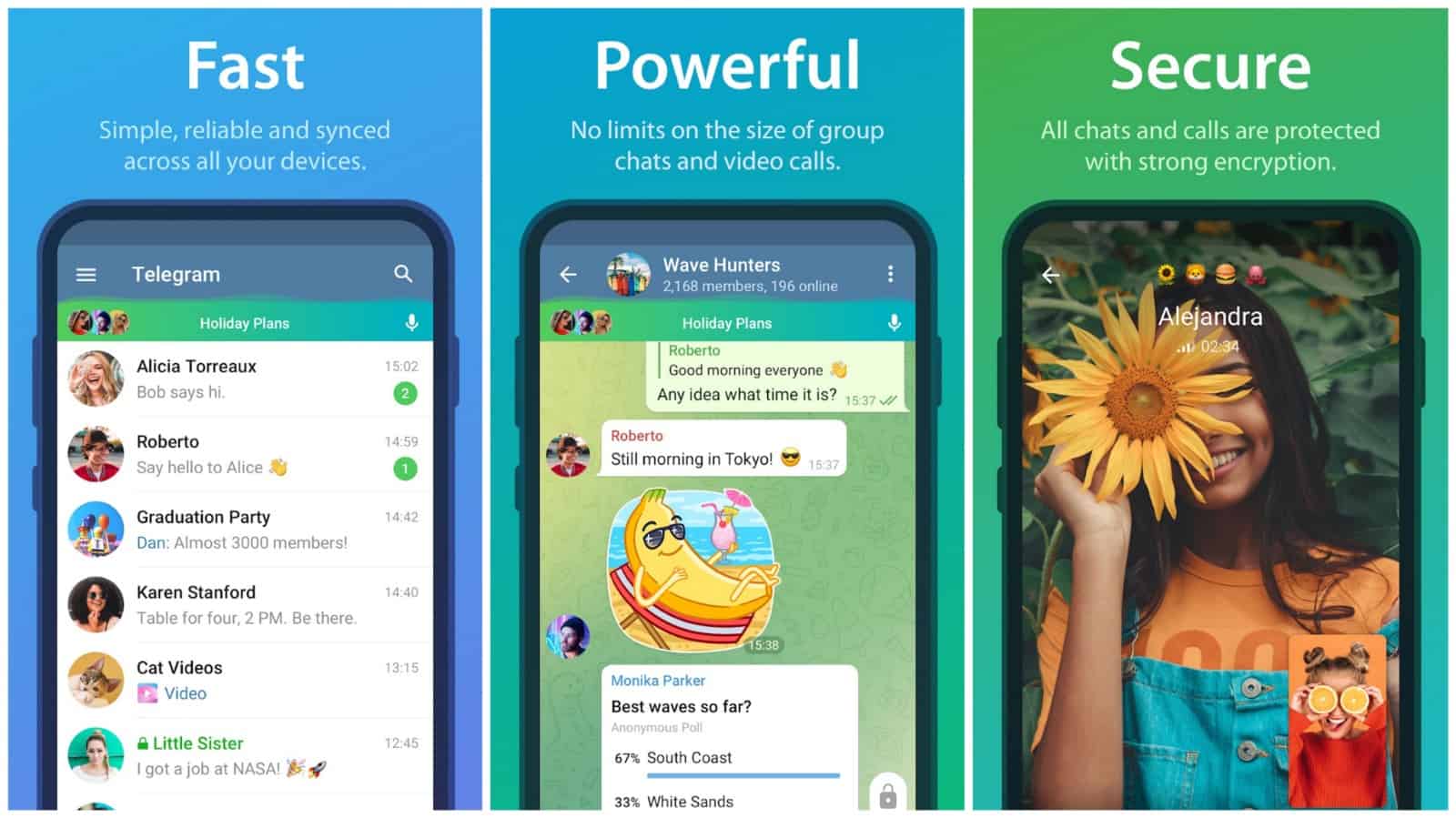 Telegram is one of the most feature-packed apps on this list, while it offers strong encryption as well. Everything on Telegram, including chats, groups, media, and so on, is encrypted using a combination of 256-bit symmetric AES encryption, 2048-bit RSA encryption, and Diffie-Hellman secure key exchange. The app has a fully documented and free API for developers, open source apps, and verifiable builds.

The app allows you to create group chats with up to 200,000 members, share large videos, and the same goes for document sharing. You can share documents up to 2GB per document, without a problem. Sending text and voice messages is a breeze, while the same goes for stickers, GIFs, videos, and whatever else you can think of, really. There are also plenty of customization options in the app. 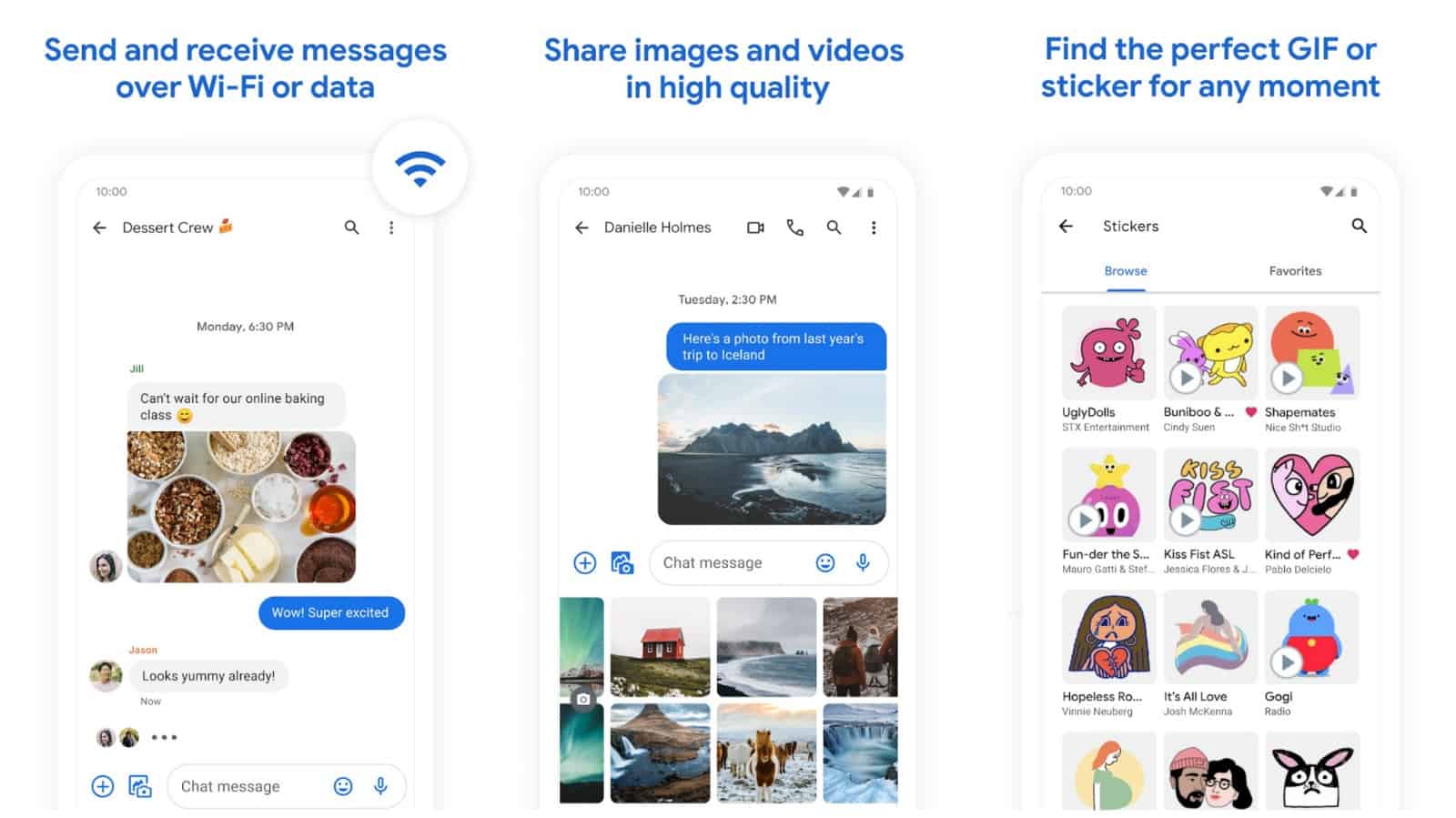 ‘Messages’ is the app also known as ‘Google Messages’. This application actually comes pre-installed on Google’s Pixel phones as a primary SMS app, and the same goes for some other smartphones. It is so much more than that, though. This app supports RCS, which essentially makes it an instant messaging app of sorts. Many people see Google Messages as the iMessage for Android.

That being said, this app offers a really simple-looking UI, which is not a bad thing. It is easy to use, and yet quite functional at the same time. Google Messages may not have all the bells and whistles some other instant messaging apps offer, but it has all the basics, and it’s constantly getting new features. The app is definitely worth trying out, especially if you send a lot of SMS messages. 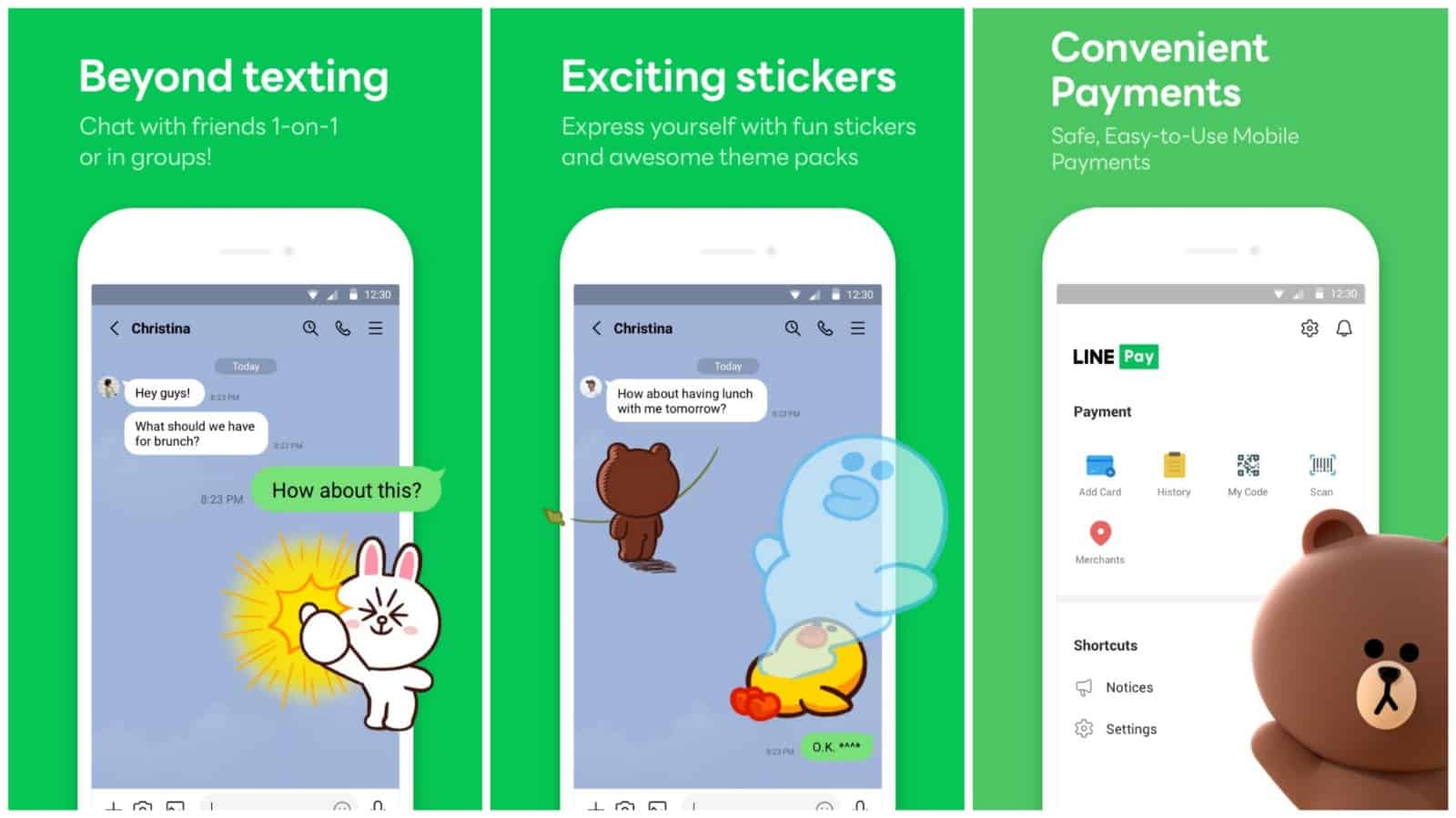 LINE may not be as popular as WhatsApp, Facebook Messenger, or Viber, but it definitely has its user base. This app has over 500 million downloads in the Google Play Store, and it also offers a great-looking UI. All the standards for instant messaging apps are here, including both voice and video calls, and rich text messaging with sticker support, and so much more. Yes, there are some unique stickers available here.

You can also change the theme of this app. There are quite a few themes available in the app, and all you have to do is find the right one. Thanks to LINE VOOM, you can also discover new posts and accounts that may interest you, which gives this app a different type of social aspect. LINE is free to use, though it includes some paid content, as do some other instant messaging apps from this list. 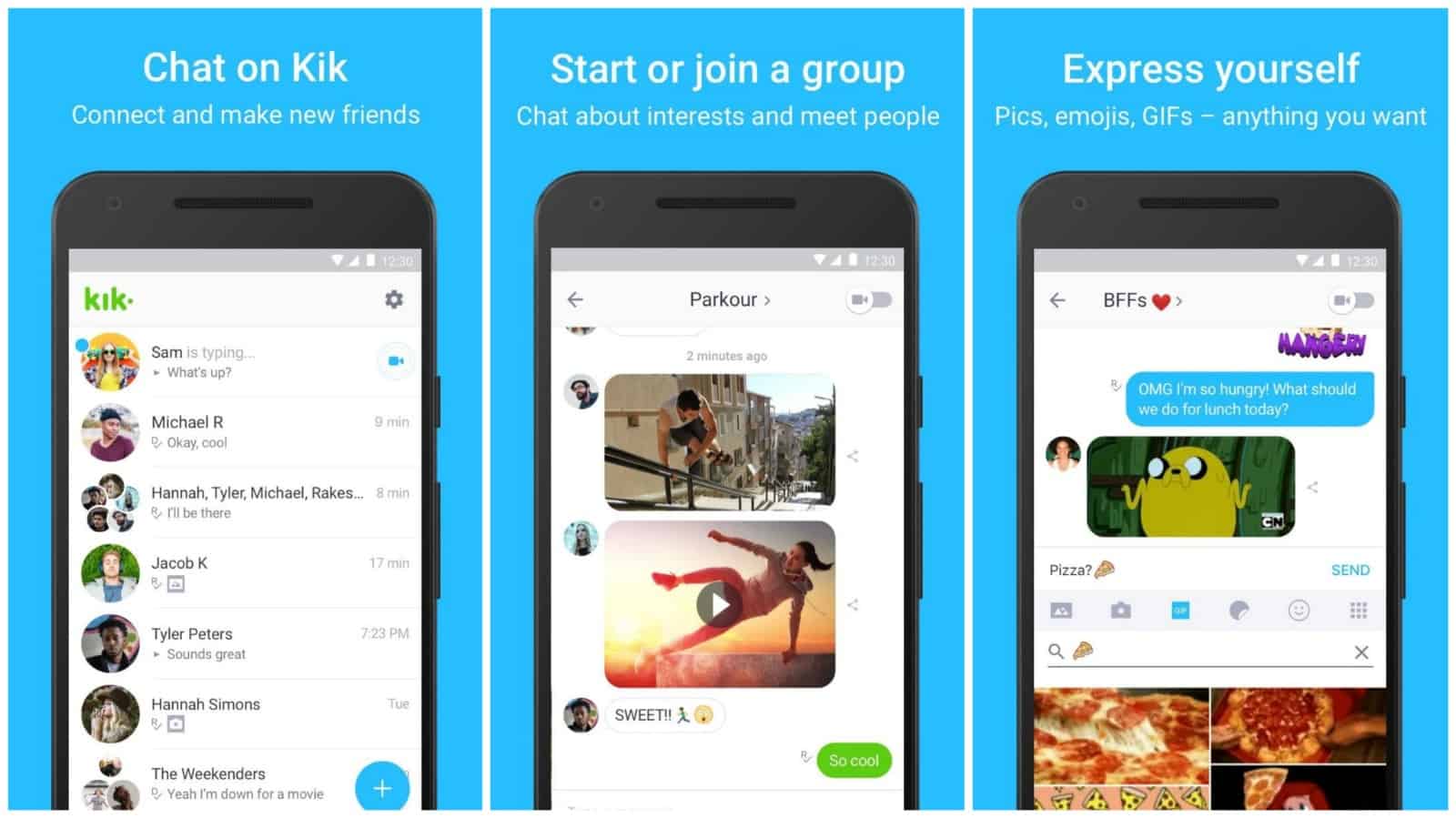 Kik can be described in a similar way to LINE, it’s not in the top 5 most popular instant messaging apps, but quite a few people use it. It has over 100 million downloads in the Play Store, and a good rating as well. This application does have a nice-looking UI, similar to some other apps from the list. It allows you to chat 1-on-1, start a group, and you can even meet new people.

Sending images, videos, and GIFs is, of course, possible. This application focuses on the fundamentals of instant messaging apps, and it does a really good job with it. Do note that users have been complaining about annoying ads, and spam messages lately. Kik obviously has some things to figure out moving forward. 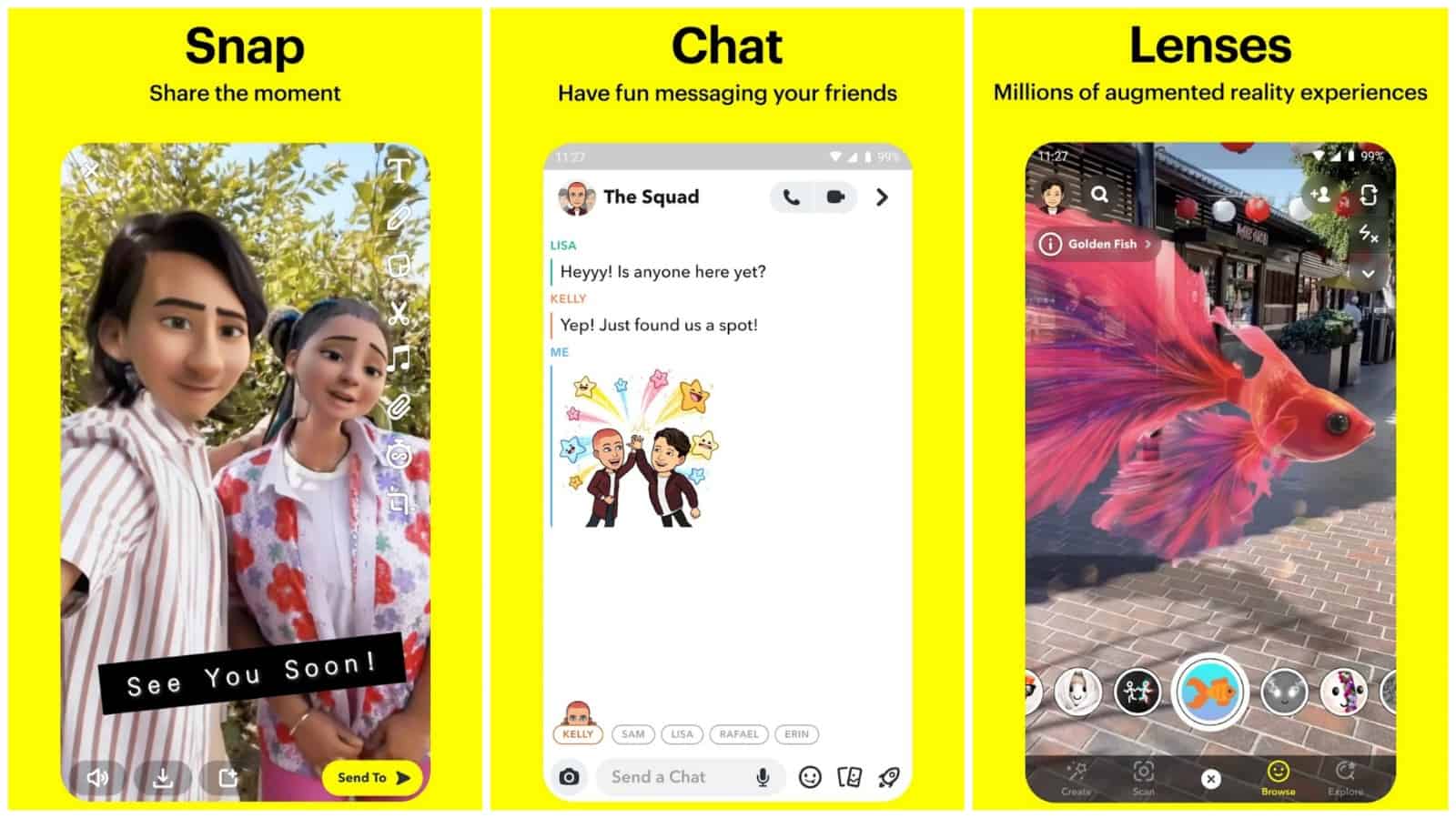 Snapchat is a different type of instant messaging app. This app’s main feature is… well, disappearing images and videos. You can send an image or video to your friend, or friends, and after they check it out, it disappears. For that purpose, Snapchat has a lot of useful filters, lenses, and even Bitmoji support. You can really create some interesting content by using this app.

If you want to use the app for regular chats, though, that’s also possible. Even video chats are available here, as you can chat with up to 16 of your friends. You can also use Lenses and Filters in real-time while chatting, which can be immensely fun. The app’s Spotlight feature features the best Snaps, and you can submit your own as well. Sharing your location is also possible via the app, and so much more. 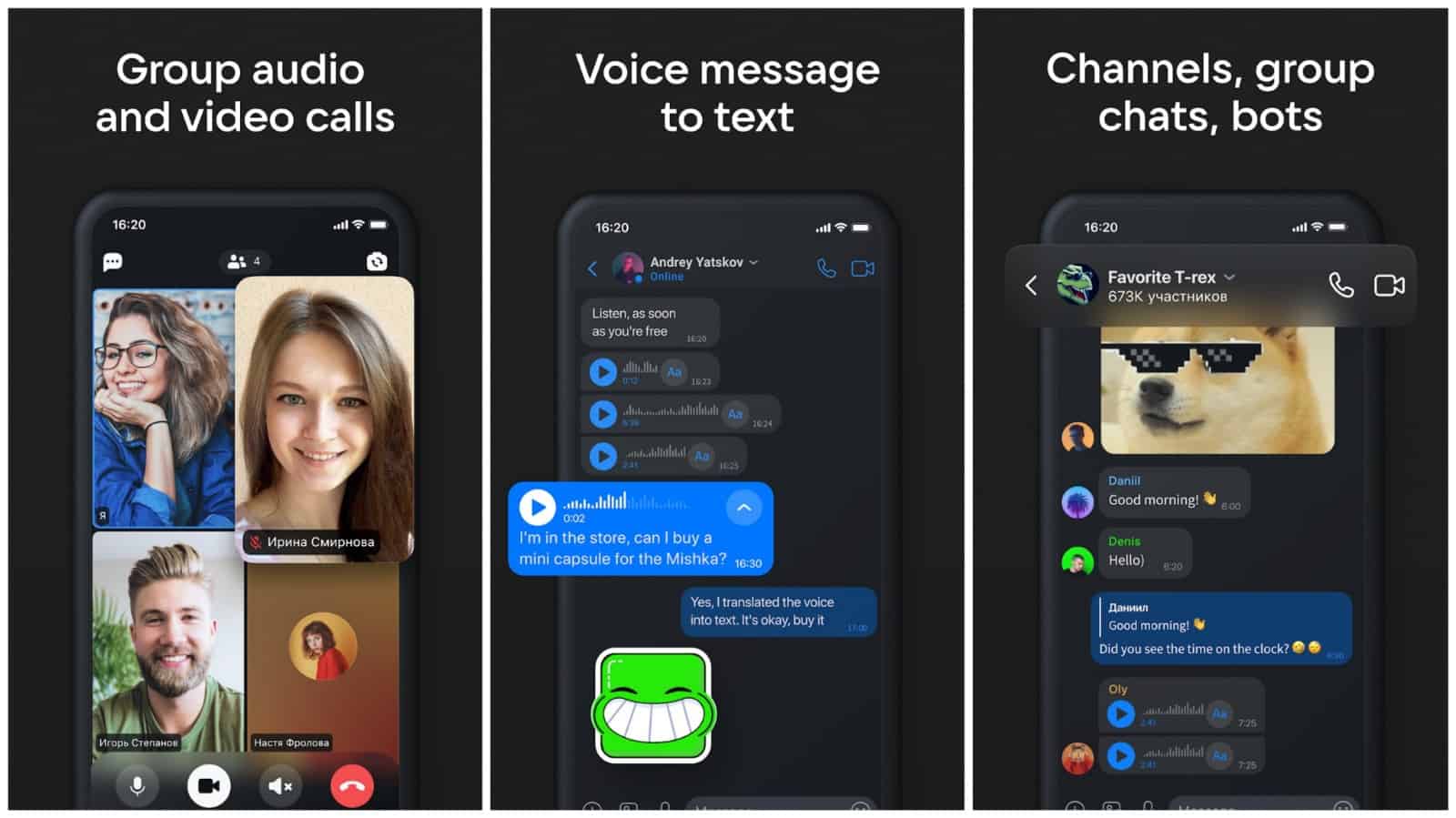 ICQ’s UI looks really nice, and if you know your old credentials, you can still access your list of contacts and get your account back. Voice and video calls are supported, as are stickers. ICQ will also suggest responses to the messages you receive, and it can even convert voice messages to text. ‘Video call masks’ are also available here, to keep things interesting, and more.