Skip to content
Advertisement
Trusted By Millions
Independent, Expert Android News You Can Trust, Since 2010
Publishing More Android Than Anyone Else
51
Today
177
This Week
795
This Month
7226
This Year
117183
All Time
Advertisement We’ve recently talked about hunting apps, and it’s not time to do the same for hunting games. In the list below, you’ll find our picks for the best Android hunting games. There are a lot of hunting-themed games in the Play Store, so choosing only 10 was not an easy task. Still, we needed to trim down that list. We tried our best to include various different games here, just to keep things fresh.

Some of the games do compete one with the other, but others are completely unique. You’ll get a lot of information if you keep on reading, as you’ll find descriptions for every game below, along with various other information. We’ve included some screenshots / promo videos, prices, required Android versions, and so on. Do note that these games are not listed in any specific order.

Below is a quick overview of the top 10 best hunting Android games for 2021, including any download and in-app purchase costs.

Below is a little more information on each game, a suggestion for the type of user the game is best suited to, and a direct link for easy downloading. 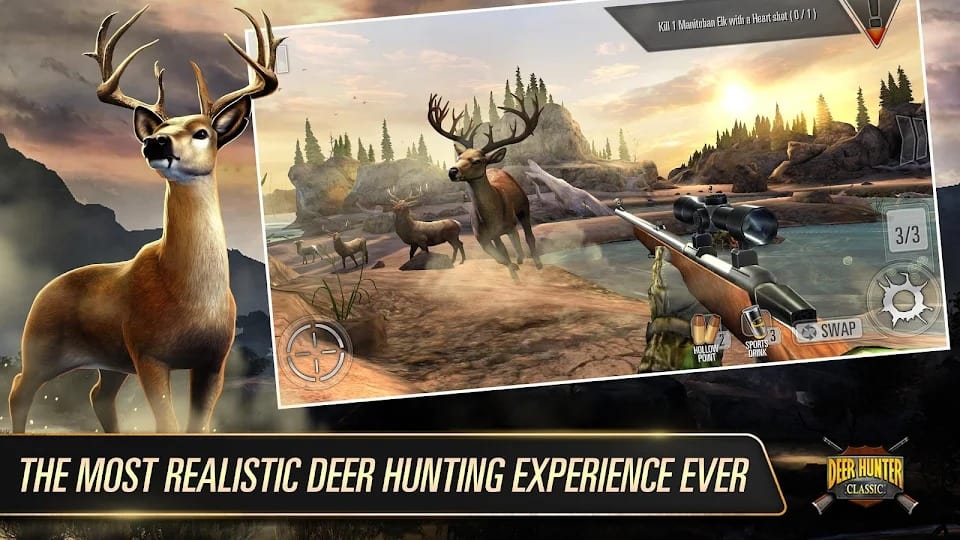 Deer Hunter Classic is probably the best choice for most of you. This game represents what most people think of when someone says “hunting games”. It gives you a first person view of a hunter, and it allows you to hunt over 100 animal species. You’ll need to track them down first, though, of course. This game offers a lot of different weapons to choose from, and tons of upgrades that you can use.

Now, the graphics here are really good, it definitely helps with the immersion. One thing to note is that the game does have bugs. Despite those, it still has a really good rating in the Play Store, as the gameplay is excellent. If you’d like to try something close to a hunting simulation game, Deer Hunter Classic is a game you should check out.

Big Hunter is one of those unique hunting games, you will not find anything similar to this in the Play Store. This is an arcade game, but an excellent one. It’s also one of the newer titles on this list. It has really nice graphics, which has its own style, and is not trying to be realistic or anything of the sort. It’s unique, and that definitely works for Big Hunter, as it complements the gameplay.

In this game, you can choose from a lot of different weapons, and you’ll need to choose on your tactics, how to approach each hunt. You will face some truly gigantic animals in this game, so you’ll need to have the right approach. The gameplay is quite simple, though, and it can also be used for those short time sessions, just to kill some time. The game does deliver a story for you to follow, though, which will make it far more interesting to some of you. 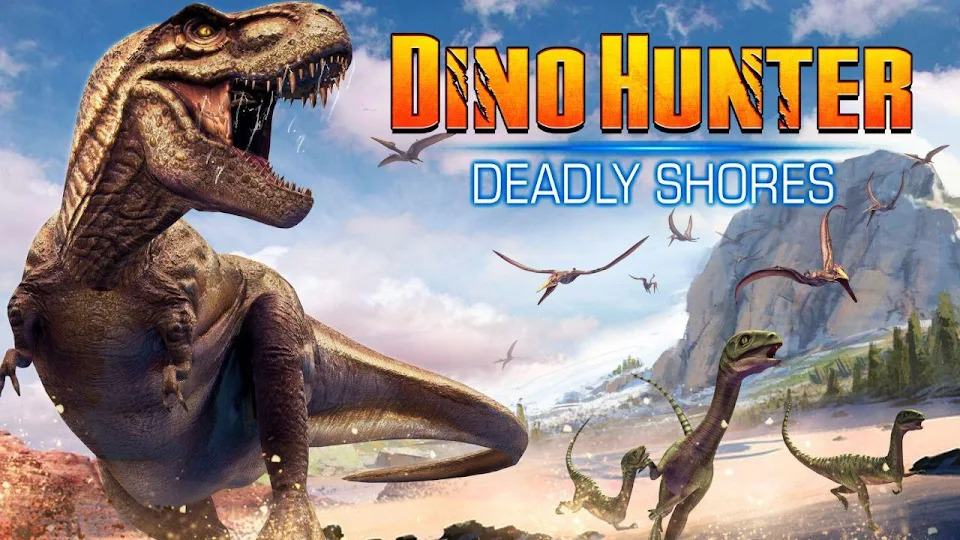 This game will take you to some exotic locations in search for dinosaurs. You’ll be able to use some interesting weapons along the way, and unlock even more interesting ones as you progress. You can win various rewards in the game, if you do a good job, of course. The game is free to play, though in-app purchases are included, in case you’d like to take advantage of them.

Wild Hunt is one of the most popular hunting games in the Play Store. There’s a good reason for that. This game has a lot to offer, ranging from graphics to gameplay. There are tons of different maps that you can explore, in various different countries. You also have a wide variety of animals to hunt here, and the game is trying to be as realistic as possible, as it will make things difficult for you with rain, wind, and so on.

As in most other games, you’ll be able to collect and upgrade new weapons, which will make things a bit easier. You will be hunting in the woods, mountains, forests, and savannas. This game will take you to real locations in Africa, America, Asia, Australia, and Europe. The game is free to play, though do note that in-app purchases are included, and the game will try to tempt you to spend some cash, even though you don’t have to.

Hunting Clash is one of the best looking hunting games in the Play Store, if not the best looking one. You’ll really enjoy the graphics here, but this game is not all about that. It’s actually trying to be a really good hunting simulator, and does a good job at that. One downside of this game is that it doesn’t have a tutorial like most other games out there, you’ll need to figure out most stuff on your own.

This game will allow you to hunt a wide variety of animals, in various different locations. You’ll also be able to choose between various different weapons here. You will also be able to enhance those weapons as you progress. A 1v1 PvP duel mode is also available here, in case you’d like to prove you’re a better hunter. This game is also free to play, but it does include in-app purchases.

Hunt Royale is a really fun arcade game to play, with that classic graphics style. The cartoonish graphics with blocky style really fits this game. Hunt Royale is not taking itself too seriously, and that’s a good thing. In this game, you’ll be able to go into hunting grounds as one of 4 warriors, and try to survive. Instead of animals, you’re hunting various different fantasy creatures.

There are over 30 characters that you can unlock here, and various different enemies to fight. You’ll also be able to unlock powerful skills in the game, and participate in various unpredictable special events. This game is supposed to be fun above anything else, the focus is not on realism or anything close to that. Much like almost every other game on the list, there are in-app purchases here as well, but you’re not forced to buy anything. 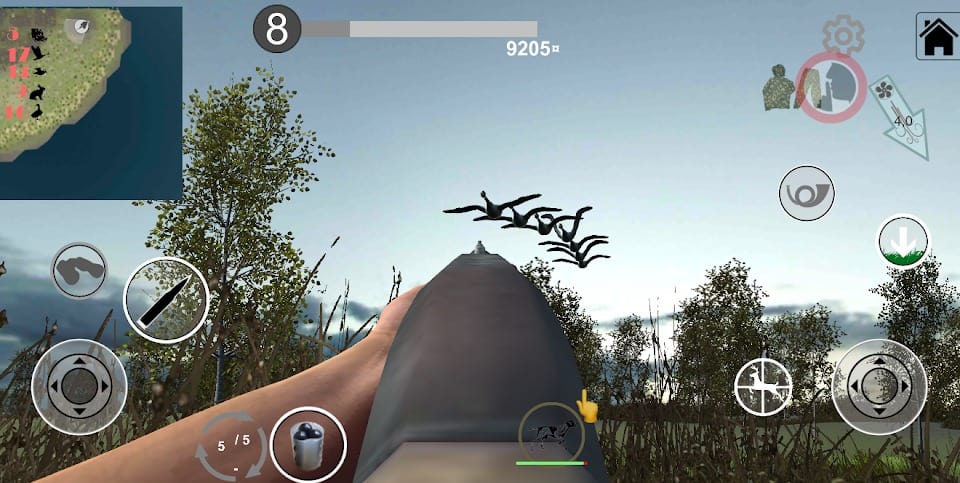 The Hunter is a hunting simulation game, and it’s one of the best ones on Android. This is an indie game, which makes it even more impressive, as it’s that good. You can choose between nine maps in this game, eight weapons, and 12 animal species to hunt. There’s also some extra gear that you can choose from, to make your hunts more successful. The decoy caller is just one example, and binoculars another.

You can also hunt with dogs, if you want, while the game’s maps will take you to Argentina, Belarus, Chile, Finland, France, Germany, Greece, Italy, the US, and so many more countries. You can hunt for moose, hog, deer, bear, fox, goose, duck, pigeon, and more. The graphics are not exactly the best we’ve stumbled upon when it comes to hunting games, but it’s not bad, and it does the job.

Pokemon GO took the world by storm a couple of years back, when it launched. This is not similar to any other game on this list, as it’s very far from your regular hunting game. This is an AR game, as it enabled you to hunt down / catch Pokemon in the real world. Augmented Reality tech enables you to use your phone to track down Pokemon in real life, with some help from your GPS.

The game evolved a lot since it was launched, as it was quite bare bones back then. Many people still play it, and love doing it. It will force you to move while you’re playing it, which is actually good for your health at the same time. You can compete in Gym battles with your Pokemon, and team up with other trainers for Raid Battles, to catch more powerful Pokemon that appear.

Hunt Cook is kind of a hybrid game. It’s both a hunting game, and a cooking game. You’re required to go out in the wild, and hunt down an animal. Then, you’ll need to prepare it and serve it at a restaurant. The gameplay is really simple, though, as the game is made in this cute, classic style. It doesn’t really resemble any other game on the list, it’s not even close to your regular hunting games.

It’s also a 2D game, by the way, so keep that in mind. It is quite fun, though, and it can entertain you. The energy system can mess with the flow of the game, though, as you’ll need to wait for periods of time before you progress, but that’s something we’re used to by now. You can decide to pay up to speed things up, as in-app purchases are included, but you’re not forced to.

Don’t Starve: Pocket Edition is not exactly the first game when you think of hunting games, not even close. This is a survival game, first and foremost, but it does have that hunting element. You’ll need to hunt down animals in this game, for food purposes, and that technically makes it partly a hunting game. That is kind of important, as you’ll starve to death if you don’t find some food.

You’ll also need to farm here, craft items, and do various other things to survive. Don’t Starve: Pocket Edition is another one of those unique games that is unlike anything else on this list. You can’t even predict the playing mechanic before you actually experience it. The game does offer unique graphics as well, in addition to gameplay, and is definitely worth checking out, even though it may not be your cup of tea.