It's that spooky time of year, Halloween is coming up. 2020 has been kind of spooky all around, though, and this year's Halloween will probably be a bit different than the ones you're used to. The pandemic took a huge tool, and the situation is still far from great, but some of you will probably find some joy in dressing up and having some fun for Halloween. Well, we've decided to compile a list of apps that are Halloween-themed.

Some of these apps will help you find the right costume for Halloween, while others will help you scare your friends. There are all sorts of apps listed down below, 10 of them, to be exact. We've also included some spooky games on the list, and also some apps that will help you customize your phone, and so on. There's something for everyone, as you'll see once you start browsing.

Truth be said, the Google Play Store is filled with apps that could have ended up on this list. We, of course, cannot list that many apps, so we've decided to hand-pick a dozen of them, our favorite ones, basically. If you'd like to spook it up for the Halloween, and are interested in these apps, read on.

Below is a quick overview of the top 10 best Halloween Android apps & games for 2020, including any download and in-app purchase costs.

All download links go to the app's Google Play Store listing. Users are always recommended to download apps from Google Play or an authorized app store. 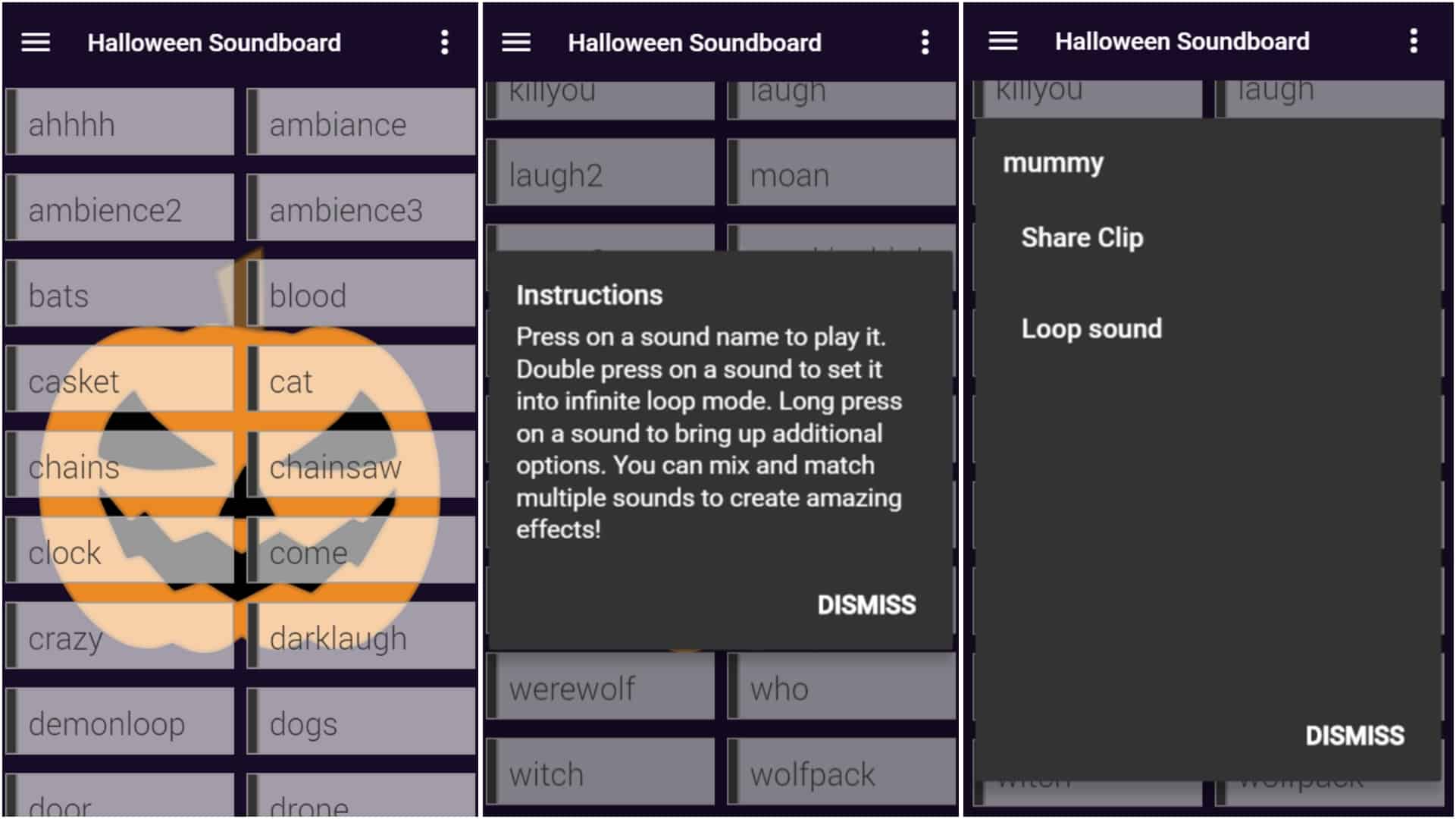 If you just want to scare your friends real quick, creepy sounds are the way to go. The Halloween Soundboard app is available in the Google Play Store, and it's free to download. This app comes with all sorts of creepy sound effects that you can get your hands on. From the sound of a bunch of bats flying by, to creepy cat sounds, to "demonloop" and chains rattling sounds. There are plenty of choices here.

Now do note that this app does come with ads, and a single in-app purchase is available for that purpose, but you're not exactly forced to pull the trigger. Another thing worth noting is that this app's UI is kind of old. It looks out of place, but that probably won't bother most of you. You won't be spending that much time inside this app either way. Buttons for each creepy sound are easy to see and use, and that's the most important thing. 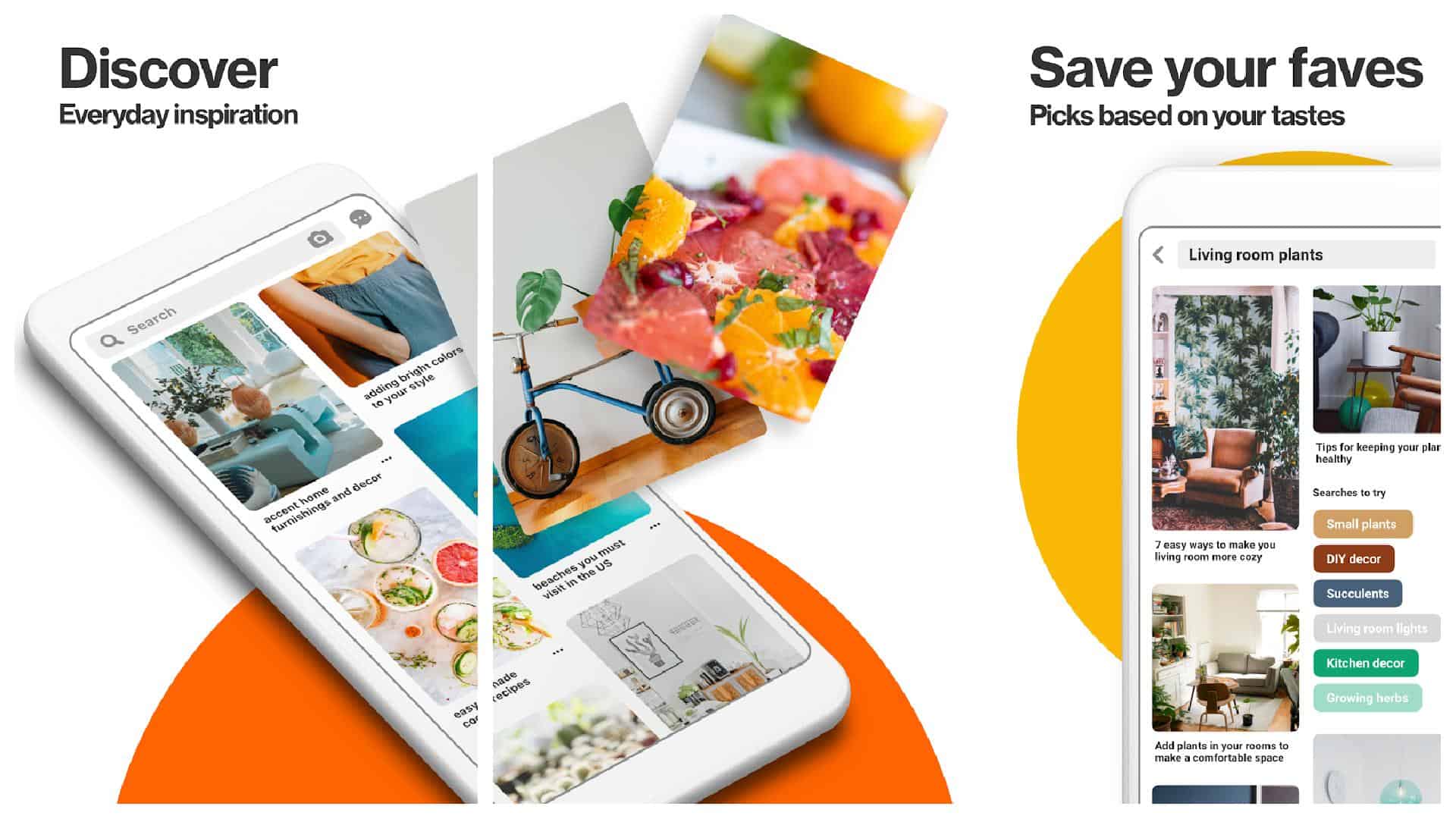 Pinterest is a social media network of sorts. A better description would be a social media network for creativity. Many people head to Pinterest to get inspired, to get ideas for some projects, and so on. That's what the company is aiming for, to provide its users daily inspiration in various ways. Well, Pinterest can certainly inspire your Halloween costume, that's for sure.

You can simply use the app's search to and search for 'Halloween' or 'Halloween costume', and you'll be set. You can also find various ideas for Halloween decorations, especially if you plan on doing them yourself. The sheer number of immensely creative people on this platform always astounds me, so I'm sure you won't be disappointed in that regard. The app's design is also very clean and straightforward, while the dark theme is also available. 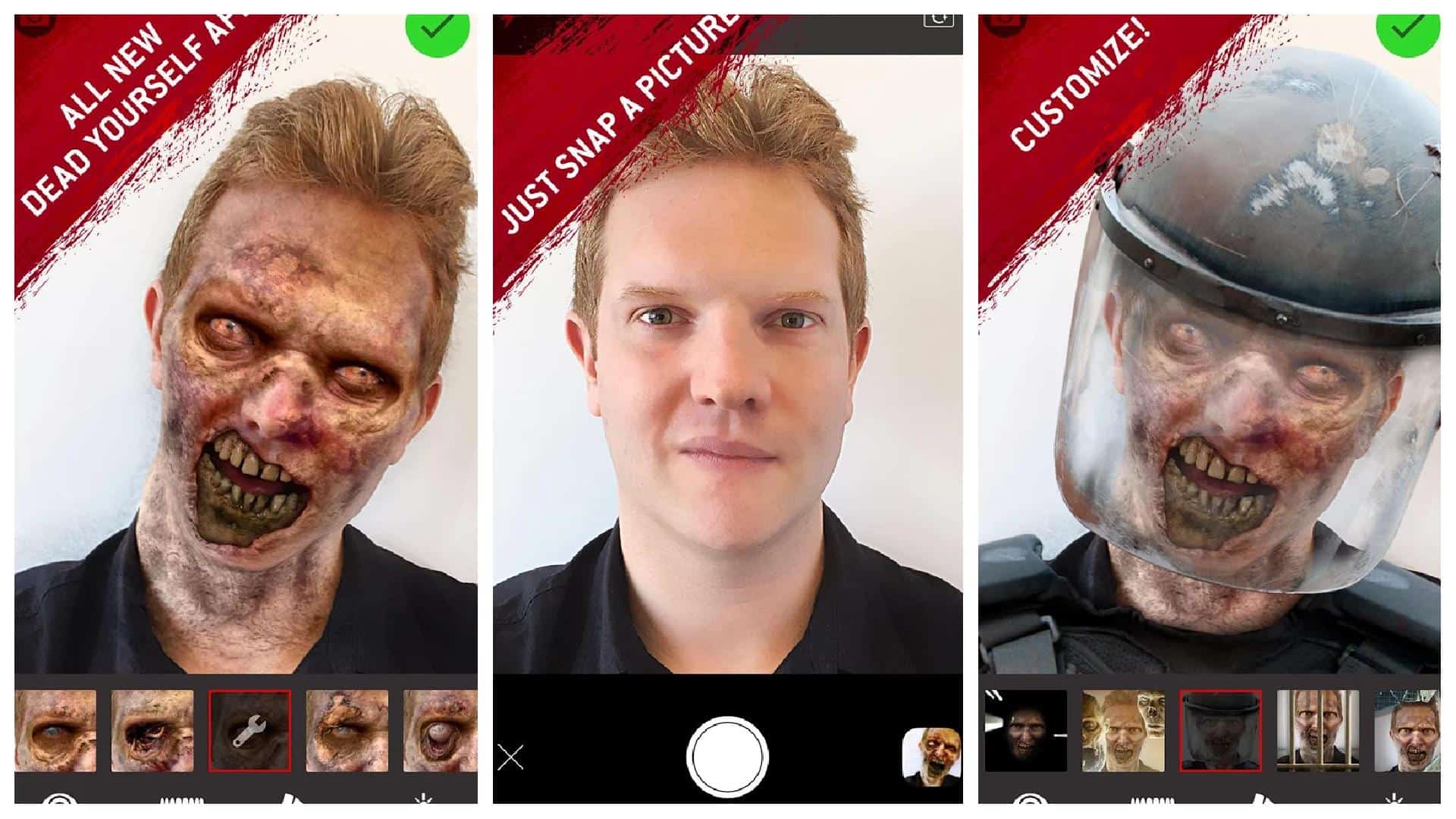 The Walking Dead Dead Yourself

Are you a fan of zombie-themed movies and TV shows by any chance? Have you wondered what you'd look like if you were playing a zombie in one of those productions? Well, if the answer to those questions is 'yes', chances are you'll like this app. 'The Walking Dead Dead Yourself' app has a really neat name, and it has one purpose, to zombify you. Well, to zombify a picture of you.

This app allows you to either take a picture, or use one from the gallery, in order to zombify it. There are tons of options included in the app itself, so you can create some truly inspired pictures with it. The end result will most likely be a rather realistic image of you as a zombie. You can add various objects to your picture, that will make it even cooler than it would otherwise be. This app is perfect for messing around for Halloween, that's for sure.

If you're looking to spice up your Android keyboard for Halloween, FancyKey Keyboard is a great choice. This is the ultimate keyboard for those of you who love customization. The app is highly customizable, and you can spruce it up for Halloween to extreme lengths. You can customize the key font and color, typing effect, swipe line and effect, typing sound, and so much more.

This app comes with over 70 funky fonts, over 3,200 emoji and emoticons, and over 50 themes. On top of that, over 50 typing sounds are available as well. If that's not enough for you, you can even use your very own image for the background of this keyboard. So, if you have a creepy pumpkin, for example, that you'd like to use, go for it, that will make this keyboard even more Halloween-y. 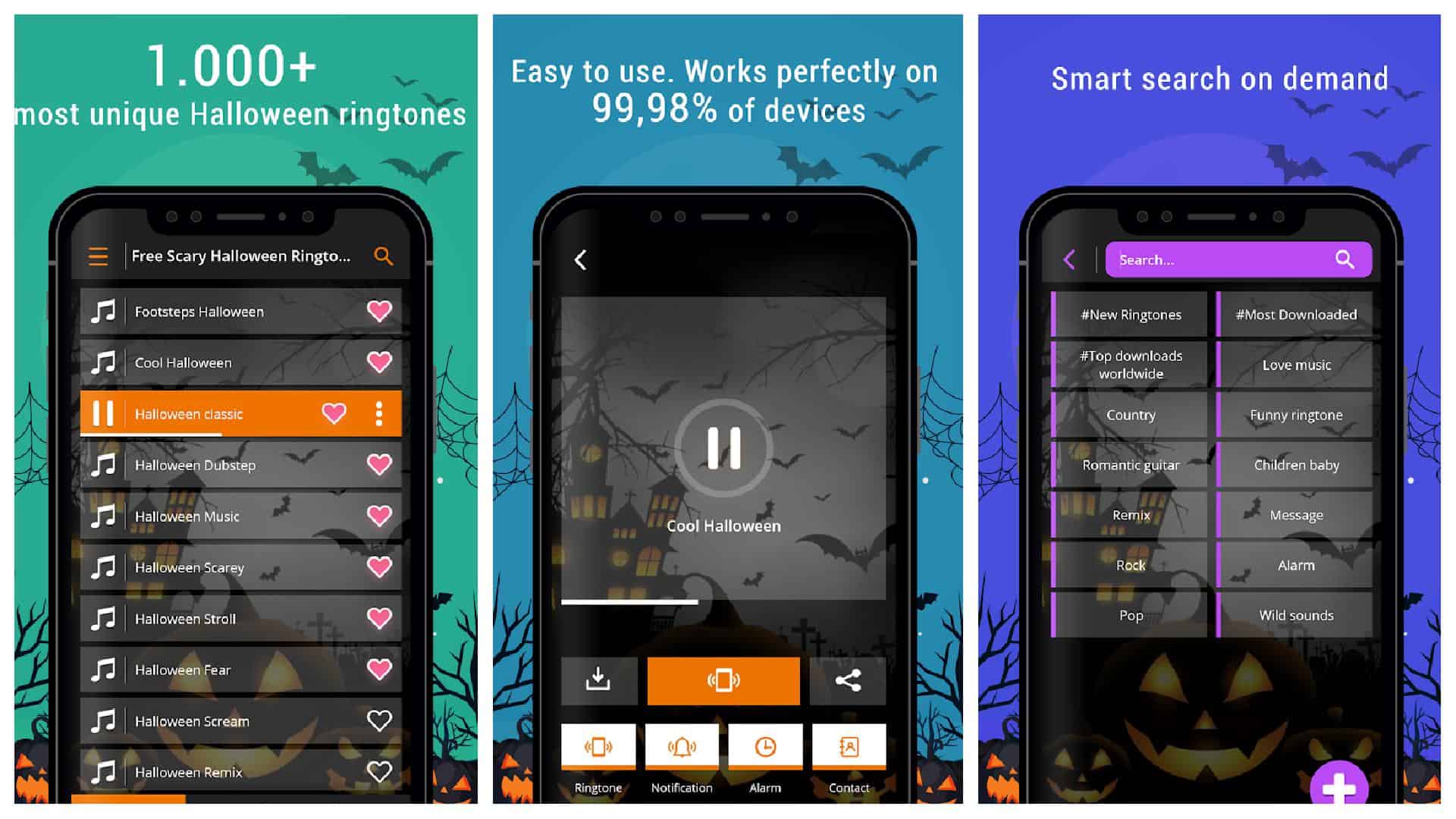 Are you bored with a ringtone on your device, and would like to step it up for Halloween? Well, the Free Scary Halloween Ringtones app is here to help. The name of this app is kind of self-explanatory. The app is all about creepy ringtones that you can use for Halloween, and it does a really good job at providing those. This app has actually been made for Halloween 2019, and hasn't been updated in a year, but it's still very much usable this year.

The app works really well, and it provides quite a few ringtones. You'll find over 10,000 high-quality ringtones included on the inside. You can download those ringtones to your device for free, without a problem. The best of all, this app's interface doesn't look half-bad, not at all. Apps like these usually look really bad, especially those made for a single event. Well, not this one. 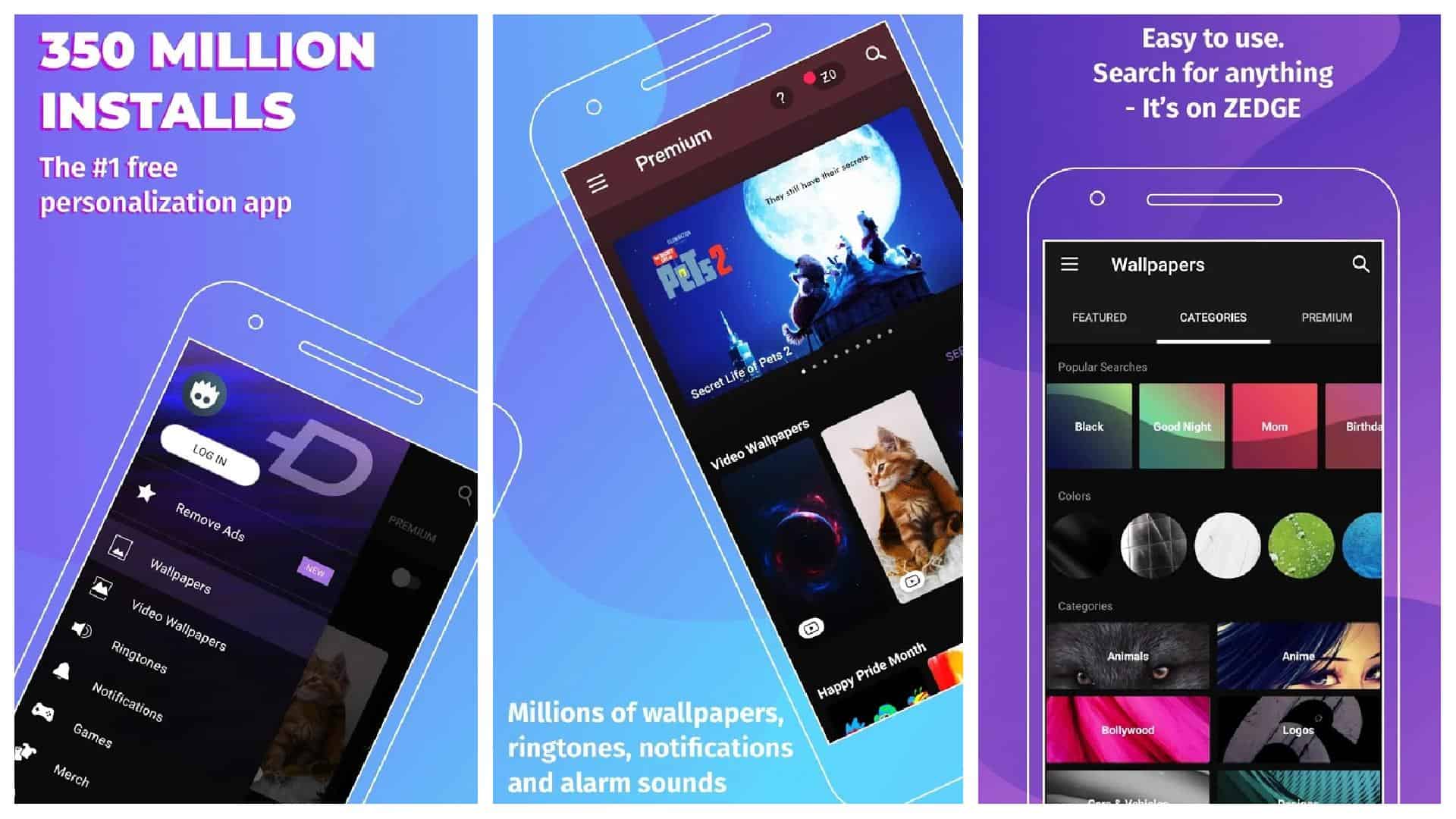 ZEDGE is… well, it's a multi-purpose app, that's for sure. This app has tons of wallpapers, ringtones, and notification tones for you to check out. Animated wallpapers are also available in the app. This app and service in general have been around for a long time. Even before smartphones were a thing, ZEDGE was around, available via its original website. The app grew quite a bit since then.

Now it's home to an endless number of high quality wallpapers, ringtones, etc. The app's UI is also really sleek, and a joy to use. You will find tons of Halloween-themed wallpapers here, and the same goes for ringtones and notification tones as well. The thing is, the app moved to a trial-based model a while back, so if you do plan on using it for an extended period of time, you will have to pay up. Still, you can use it for free for this particular occasion, without a problem.

If you're into gaming, and are looking for a simple, casual game for Halloween… well, Plants vs. Zombies 2 is the way to go. In this game, your goal is to defeat endless legions of hilarious zombies, by leading an army of plants. You will give those plants power with Plant Food, and the developer really does get creative here. You'll see various different plants and attacks here.

You can even compete against other players in the arena, if you get bored playing this game all by yourself. The developer also tends to release a special Halloween theme for this game around Halloween, so that is also something to look forward to. We still don't know if it will happen this time around, but there's a good chance it will. That will make the game even more appealing as a Halloween title.

Those of you who are fans of The Walking Dead, and other zombie-themed movies / TV shows, well, you'll probably enjoy this one. The Walking Dead: Season One is the beginning of a five-part game series. This game is extremely immersive, and chances are you'll enjoy it quite a bit. Do note that the parts 2-5 of the game are not free, though. You can purchase them if you'd like to play.

You'll be playing this game as Lee Everett, a convicted criminal, who has been given a second chance thanks to the apocalypse, essentially. Your choices will change the story around you in this game, which makes it immensely interesting. The graphics int he game are really compelling as well, and they do bring the whole thing together. The atmosphere is great due to the graphics, story, and the sound effects. 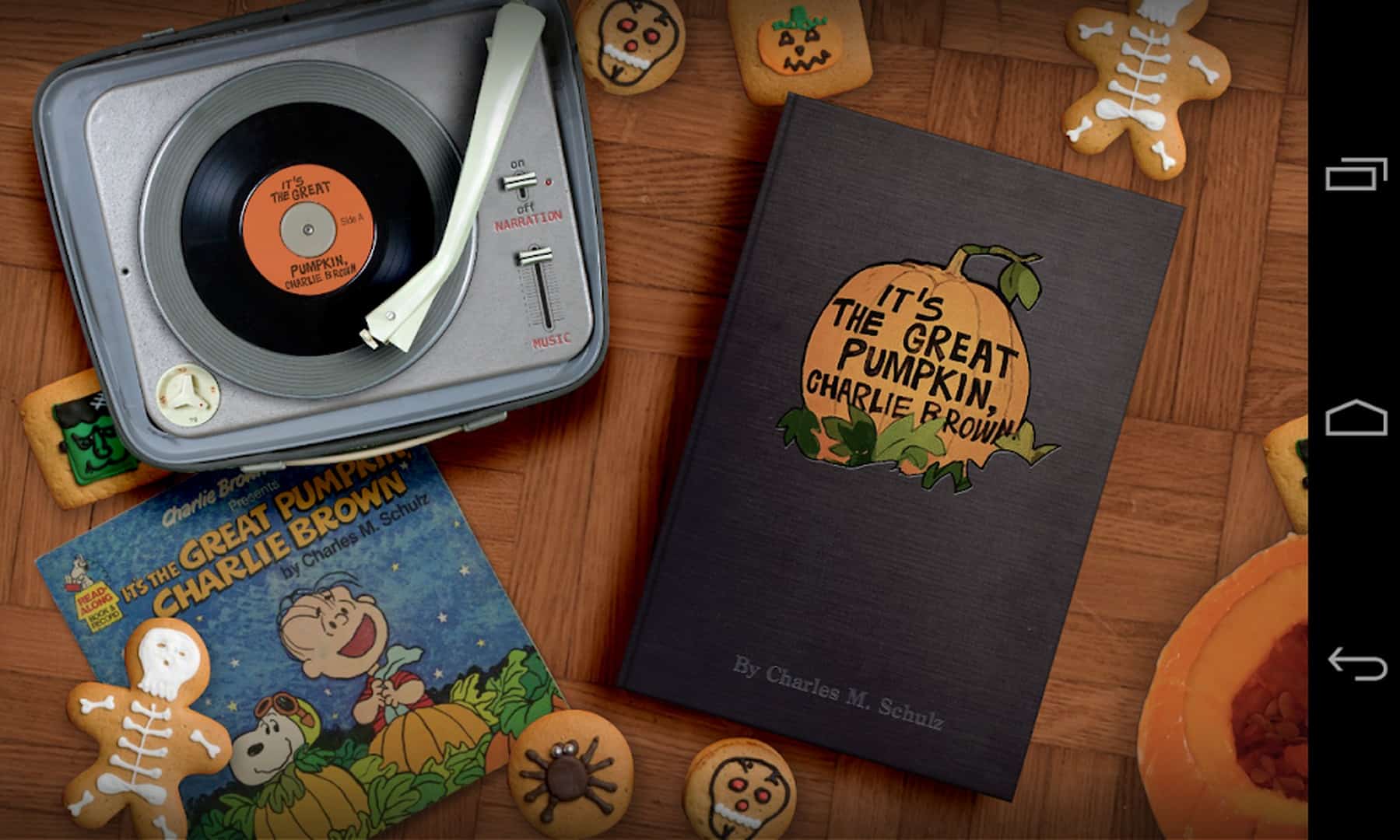 It's the Great Pumpkin, Charlie Brown

If you're on the lookout for a kid-friendly Halloween game, that will offer some joy to your kids… well, look no further. 'It's the Great Pumpkin, Charlie Brown' is one such game. In this game, you can create your own Peanuts character and join Charlie Brown at his very first Halloween party. This app allows you to choose from millions of hilarious costume combinations, there are really tons of them to choose from.

The game is narrated by Peter Robbins, the original voice of Charlie Brown. You will be able to go trick-or-treating with Charlie Brown, and carve your own pumpkin. You'll also be able to play Schroeder's piano, and bob for apples. The game also comes with the original soundtrack, dialog, and audio from the 1966 classic. Do note that this app is not free, though, you'll have to pay for it before you download it.

Into the Dead 2: Zombie Survival

Into the Dead 2: Zombie Survival is probably one of the best games for zombie fans out there. The atmosphere in this game is on a whole another level, as it feels creepy every step of the way. The graphics are great, and that probably has something to do with it, along with sound effects and soundtrack in general. This is actually a sequel to the Into the Dead game, which was immensely popular.

In this game, you're on a quest to save your family. The plot is set in the times of the zombie apocalypse, of course. You'll be able to arm yourself with tons of powerful weapons, and be off on your journey. There are multiple endings to the game, and there are 7 chapters available to play. There are quite a few environments available as well, and daily and special event modes as well.


Trusted By Millions
Independent, Expert Android News You Can Trust, Since 2010
Publishing More Android Than Anyone Else
25
Today
144
This Week
399
This Month
5143
This Year
106618
All Time