It has been quite some time since Google announced the demise of Google Hangouts. The app is still around, though, even though it probably won’t linger around for long. The company already released a number of updates which removed some of the app’s features, and the app hasn’t really gotten a new feature in a long time. Google has a tendency of killing its services, service that it deems are not doing good enough. Google Hangouts is one of those services, and that’s why we’ve compiled a list of Google Hangouts app alternatives for Android, for you to check out.

Do note that both Google Meet and Google Chat will remain available, at least for the time being. Google is basically keeping these two apps around to replace Google Hangouts, in a way. Many would argue that there are much better alternatives out there, which is why we’ve put together a list of them. There are tons of instant messaging services available in the Google Play Store, many of which do a better job than Google Hangouts did. We’ve tried to compile a rather versatile list of applications here, so no matter whether you need a more business-oriented service, or something for communicating with your friends, we got you covered.

Below is a quick overview of the top 9 best Google Hangouts app alternatives for Android for 2020, including any download and in-app purchase costs. 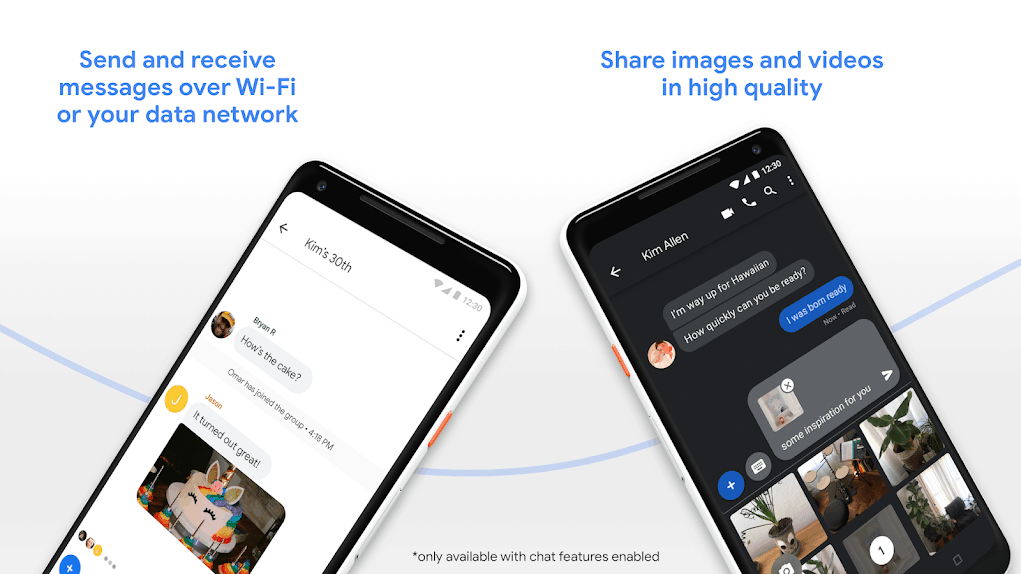 The ‘Messages’ app, also known as Google Messages, is a solid alternative for Hangouts, but only if its RCS messaging is available in your region. The ‘chat features’ of the Google Messages app have rolled out to a number of regions around the world. Those are also referred to RCS messaging features, and that is something you need to activate within the app’s settings.

If you enable it, you’ll be able to send messages over the Internet to users who have that option activated as well. It sounds a bit convoluted, and it currently is, so it probably isn’t the best solution for everyone. The benefit here is, that you can send SMS messages to users who don’t have that option activated, from the very same chat window. This is essentially Google’s competition to iMessage, though it needs to mature, that’s for sure. 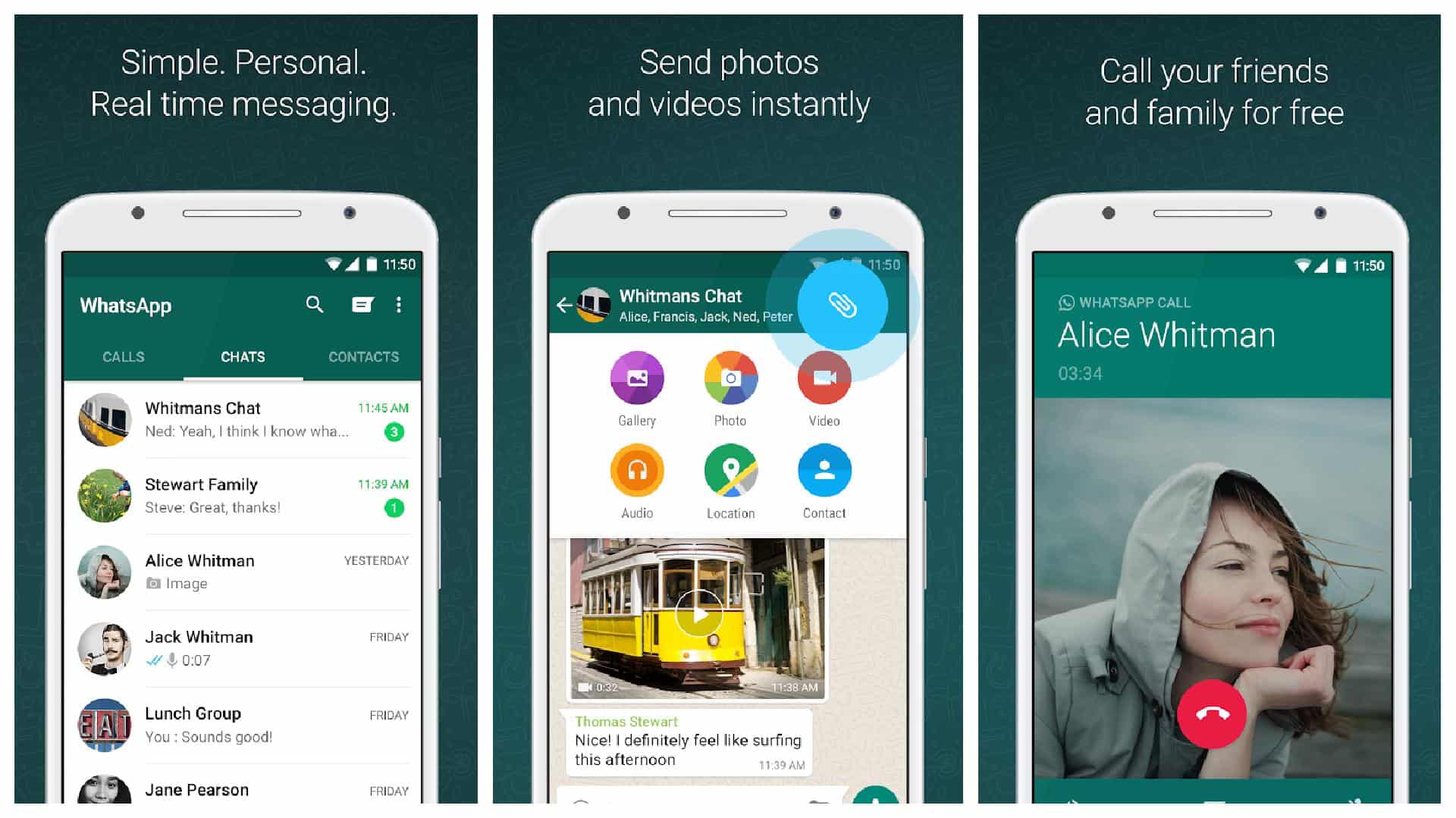 WhatsApp is one of the world’s most popular instant messaging platforms, and it’s a great alternative to Google Hangouts. The downside of this app is that you can use it on only one smartphone at the moment, as it ties in with your mobile number. That being said, the design of the app is really flat, and minimalistic, and the app works really well. It’s extremely fluid, and that has been the case for a long time.

This app, much like various other instant messaging apps in the market, allows you to send images, videos, GIFs, and so on. The app also allows you to make free calls over the Internet as well. Group chats are supported, while the WhatsApp Web option is also available, as you can chat with people over your desktop computer, if you want. There are a ton of additional features here, and yet the app doesn’t push things too far in that regard. 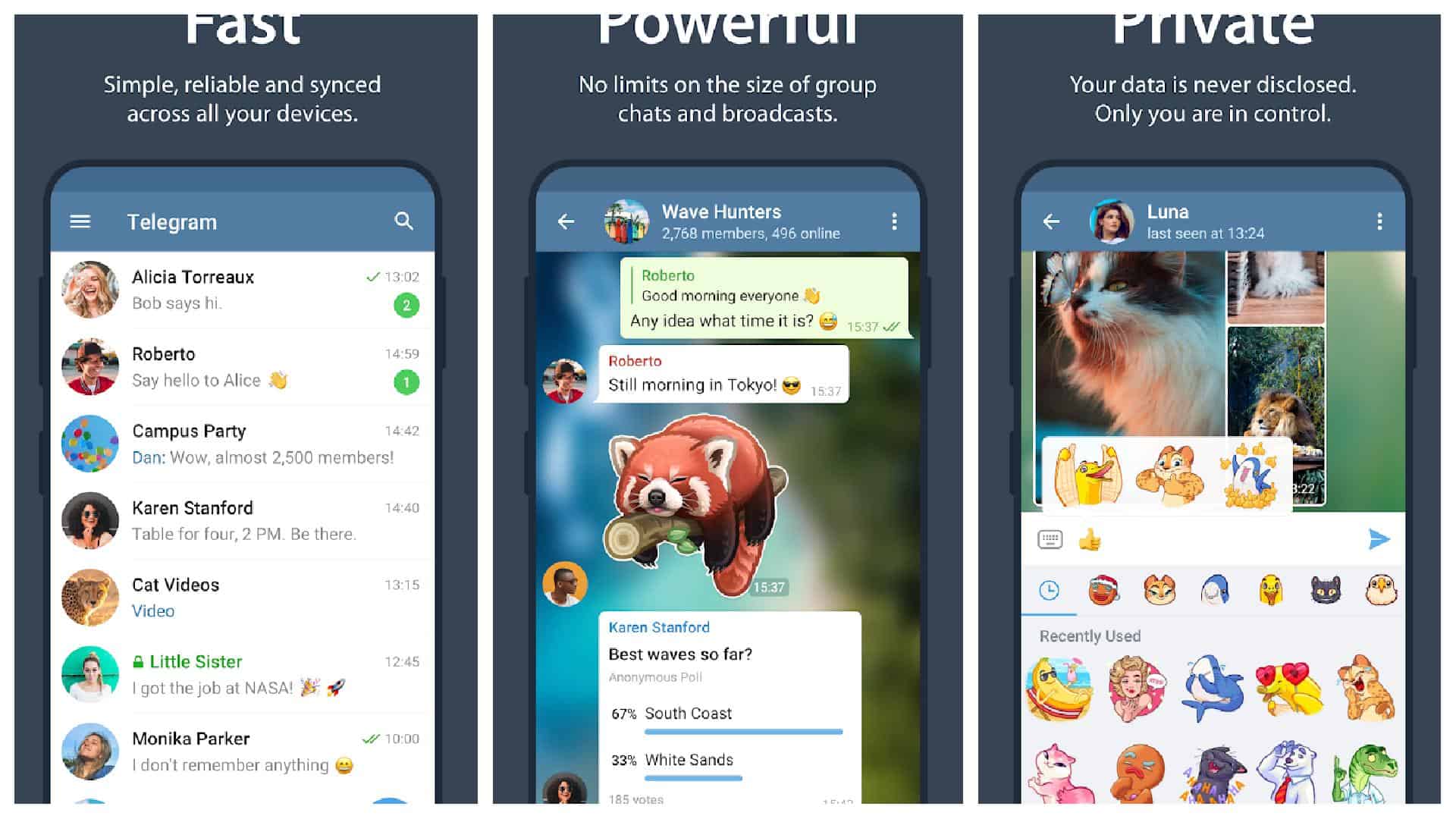 Telegram is one of the fastest instant messaging apps in the market, if not the fastest one. This app is extremely well-optimized, and it will offer you a great experience. The app also puts a huge focus on security. Everything you send via this application is encrypted using a combination of 256-bit symmetric AES encryption, 2048-bit RSA encryption, and Diffie-Hellman secure key exchange.

In other words, if you’re worried about security, this is one of the best apps you can have installed. The app allows you to send images, videos, GIFs, and even documents, if that’s something you need. Ads are not included, and the app is completely free to use. The UI design is quite simple, and yet extremely functional. The bottom line is, Telegram is a joy to use. 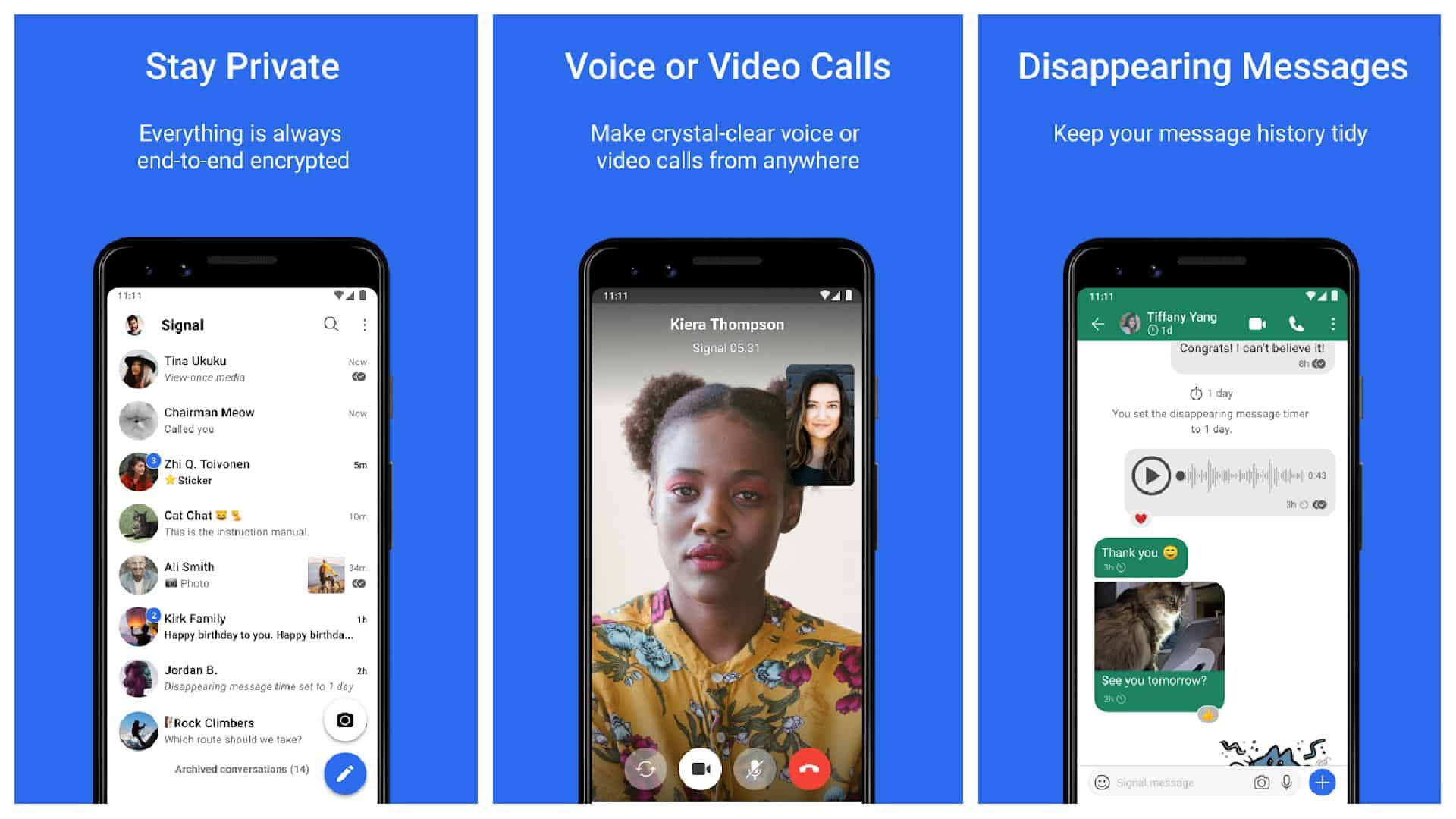 If security and privacy is your main worry when it comes to messaging apps, Signal is one of the best options out there. This application offers end-to-end encryption, and is completely independent. This is an open-source platform, it’s non-profit. Its development is supported by users, while it doesn’t have trackers, at all. It is powered by the open source Signal Protocol (end-to-end encryption).

The app’s UI is extremely simplistic, and that’s what many people will appreciate. This app doesn’t throw unnecessary features your way, but everything you’d expect out of an instant messaging app is included. You can send your pictures, videos, and GIFs without a problem. Both voice and video calls are supported by the application, and you do have some added options here. 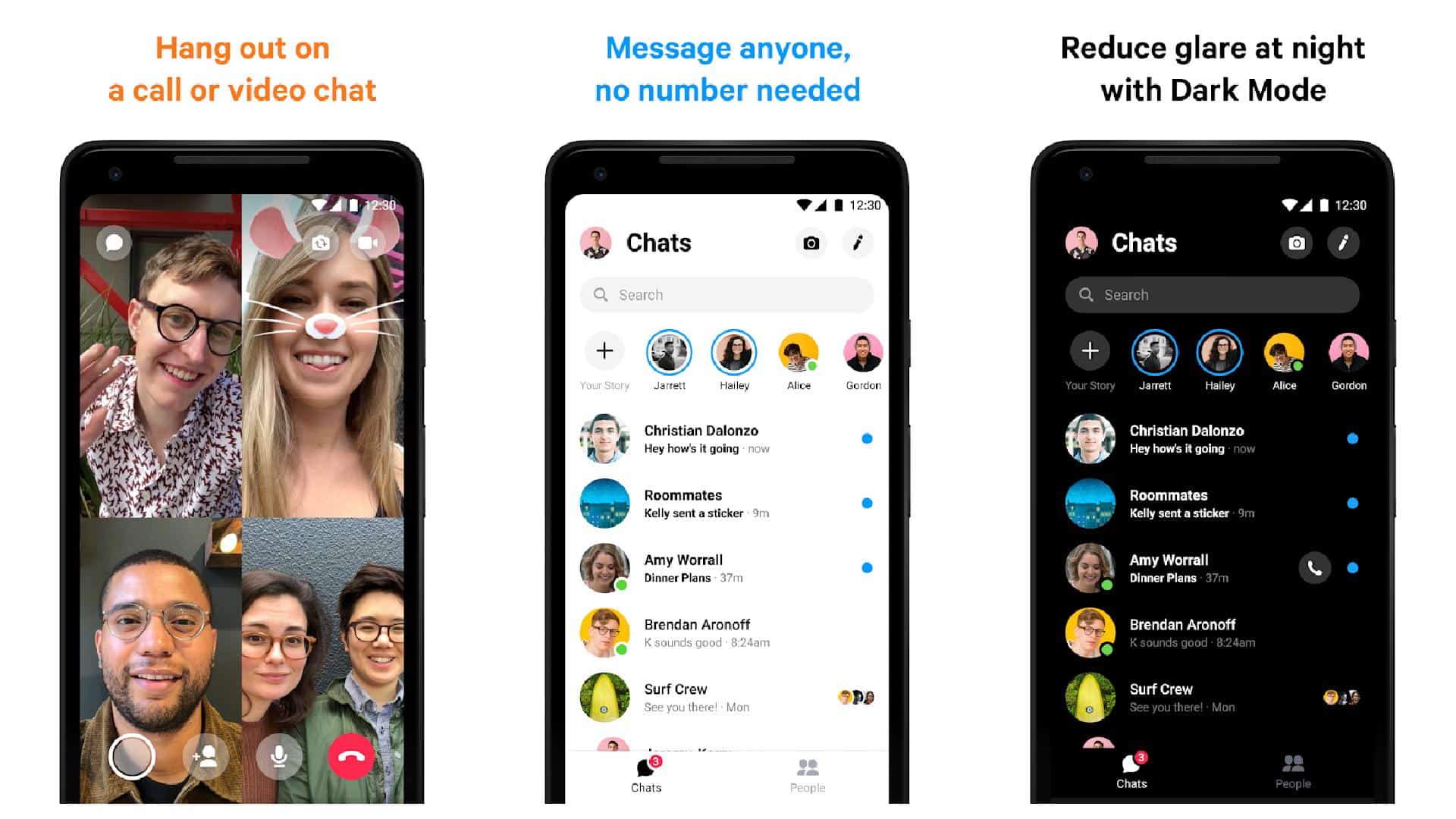 Facebook’s ‘Messenger’ platform grew into one of the most popular messaging platforms on the planet. Tons of people use this service, and it has gotten a lot better in the last couple of years. Facebook Messenger used to be extremely bloated, and had issues with performance, but that’s no longer the case. The app is extremely snappy, while it also has its own unique look, which people don’t seem to be opposed to.

Messenger is also packed with features. Sending photos, videos, GIFs, stickers, and files is a piece of cake here. You can also make voice and video calls, and both group chats and calls are also supported by the app. Pitch black dark mode is also supported here, while you can also send money via this app, though that feature is enabled in the US only. Sharing a location is also an option, and so on. There are a ton of features included here. 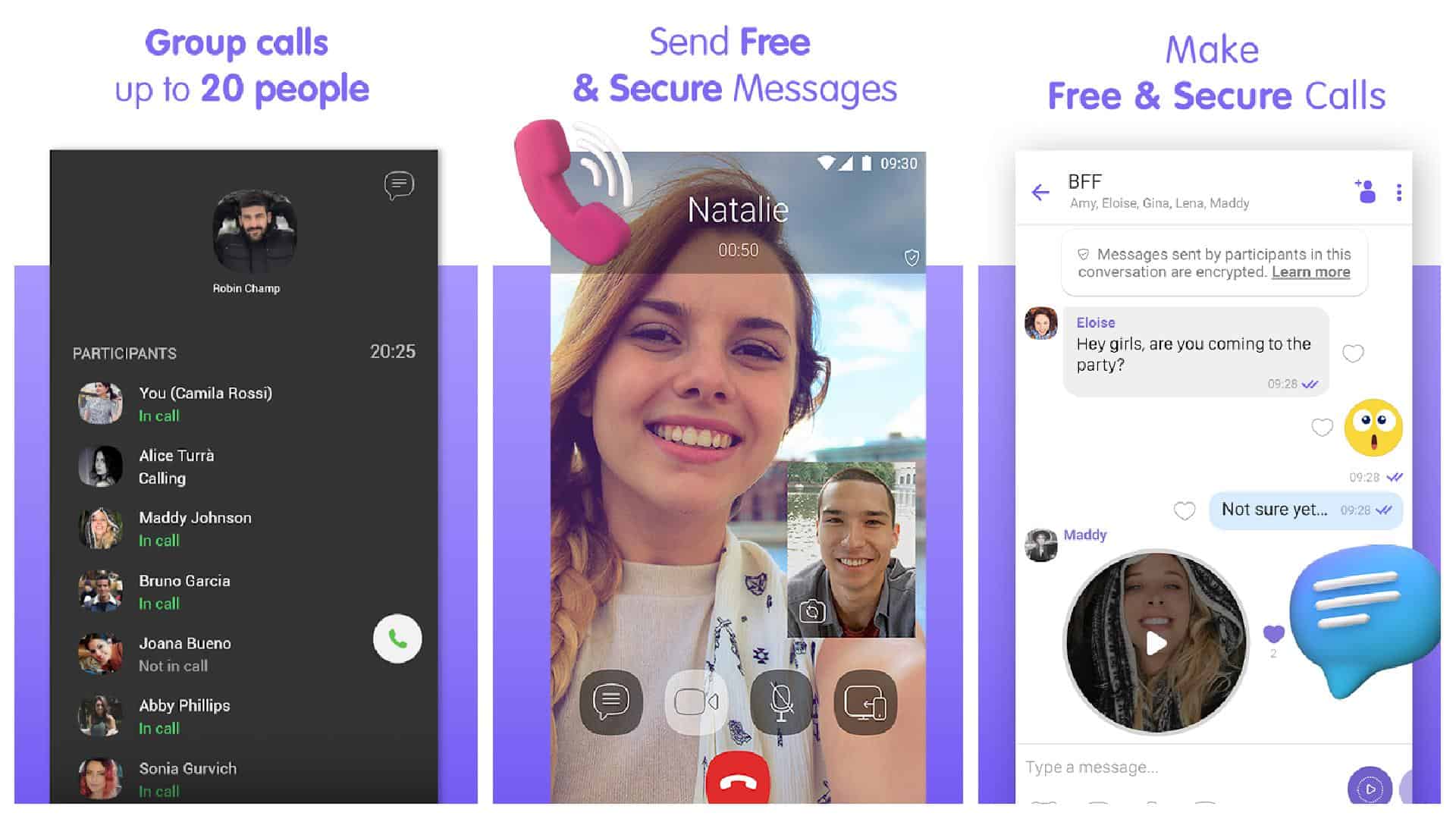 Viber is yet another extremely popular instant messaging app. It’s extremely popular in some regions, so it all depends on where you live. The app is packed with features, and one that we’d like to highlight are group calls up to 20 people. I’ve tested the app in a group call with about 6-7 people, and it worked just fine. So if you’d like to replace Google Hangouts with an app that supports such a feature, in addition to regular messaging, Viber is a great choice.

The app’s UI is also really well thought out. The app looks quite flat, and yet different from its competitors. The app does offer end-to-end encryption, and it allows you to send images, videos, GIFs, stickers, and so on. There are various chat extensions that you can utilize in Viber, such as Yelp, Booking, Spotify, and so on. The app does also offer in-app purchases, and ads, but it won’t force you to buy anything.

If you’ve, by any chance, used Hangouts to talk about games… well, there’s a much better solution for that. Discord is a dedicated app for gamers, which comes with its own set of features. Discord is kind of a unique app, and it’s definitely not your regular instant messaging application. The good news is, it has a ton of users at the moment, and if you’re a gamer, this app is a must-have.

You can create a community for your friends via this app, or perhaps for your fans. The app does allow you to chat with people, and also send over images and videos. Do you need voice calls? Well, don’t worry, as that feature is also enabled here. Custom moderation tools are included, while you can also create moderators for the community you make. The app also looks really nice, while it offers in-app purchases. You won’t be forced to purchase anything, though. 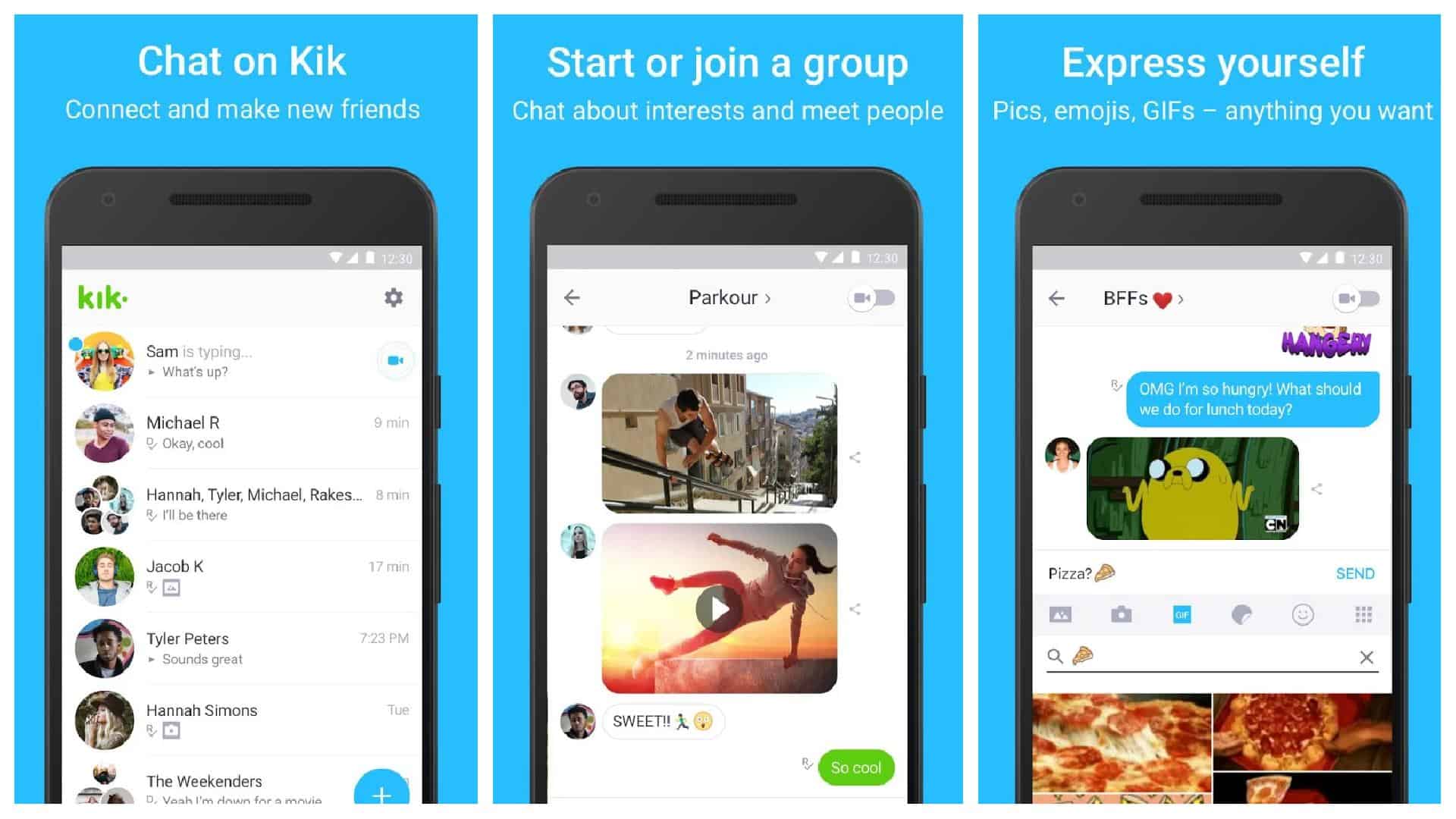 Kik is an instant messaging app that most of you probably newer tried out, even though you may have heard of it. This app is quite popular in some circles, as many people use it for random chats with people they don’t know. That’s not its only use case, of course, as you can add people you know to your list of contacts. It is, however, great for random chats with strangers, if you ever feel like you’re up for something like that.

This app does come with a really simple UI, like most apps on this list. It does allow you to send images, videos, stickers, and so on. Just like a regular instant messaging app. On top of that, you can purchase additional sticker packs if you’re interested. Group chats are supported, and so are video chats.

Slack is a great productivity tool, first and foremost. This is not your regular instant messaging app, as it’s more oriented towards businesses. Well, it’s oriented towards groups of people who work together, basically. Slack allows you to create channels for communication, and helps you work on various projects and tasks. It also allows you to call a co-worker, if needed.

You can also open various documents in Slack, as it offers integration with a number of services, including Dropbox, Asana, Twitter, Google Drive and so much more. Notifications are also customizable in Slack, while the app allows you to easily search for conversations and files. The app offers a really simple design, and it does not sports ads nor in-app purchases.