A gaming headset is a must-have accessory for your gaming sessions for a number of different reasons and there are lots to choose from, but if you want the best ones as options, then you need to wade through the ones that aren't worth your effort.

We've put together a list that has ten different options for you so you can save some of that precious game time. Which means you can spend more time on gaming with a headset you'll love and less time trying to find something that works. Regardless of whether you're playing on PS4, PC, Xbox One, Nintendo Switch, or other options like mobile or Stadia.

This is a rolling post so we'll be updating the list every month. The options on the list may not always change completely, but there will always be something that works for every user.

Below you'll find a short summary table of all the best gaming headsets we've selected.

If you're short on time, you can scan the table below and see every option we picked, along with how much they cost and buy links to jump right to where you can get them for yourself.

Should you have a little more time, you'll find short descriptions of each headset below the summary table along with the same information as well as videos and buy links to snag the headset of your choice.

There are a few reasons why this is the best gaming headset for Xbox users, but the most notable is that it works for both the Xbox One and the upcoming Xbox Series X or Xbox Series S.

Beyond that, it'll also work for PC. So you can use it for two different Xbox console generations, and your laptop or desktop.

When it comes to communication it has a Discord-certified ClearCast microphone so you can be heard in voice chat without any issues. And when this is paired with Discord's noise suppression feature it works even better.

It also offers an adjustable ski goggle headband, swivel ear cups, and Bluetooth technology so you could even connect it up to a mobile device if you wanted to. SteelSeries gave this a battery life of up to 20 hours, so you can game all night and not worry about having to charge it the next day.

When it comes to PC gaming, Sennheiser's GSP 670 is the cream of the crop. It's expensive, but Sennheiser knows audio and it's excellent on this headset.

Perhaps the best part is the mic. The swivel motion that lets you flip it up to mute the mic is the easiest way to mute yourself in chat. Period. The headset is also extremely comfortable and can be worn for all-day gaming sessions without getting uncomfortable.

Speaking of comfort, it features adjustable fit on both sides of the headset as well as on the top of the band for more or less tension. The mic is also noise cancelling. So even if you're using Discord which has a decent software-based noise filter, this just ensures that you're voice is coming through crystal clear.

And, you have separate volume dials for regular game audio and chat audio. Letting you adjust things perfectly.

It works for PC, PS4, and mobile devices too, and it offers extremely low-latency gaming audio. It works ok with PS4 and mobile, but it doesn't have the benefits of the PC software that really make the audio shine. For PC though there is no equal. 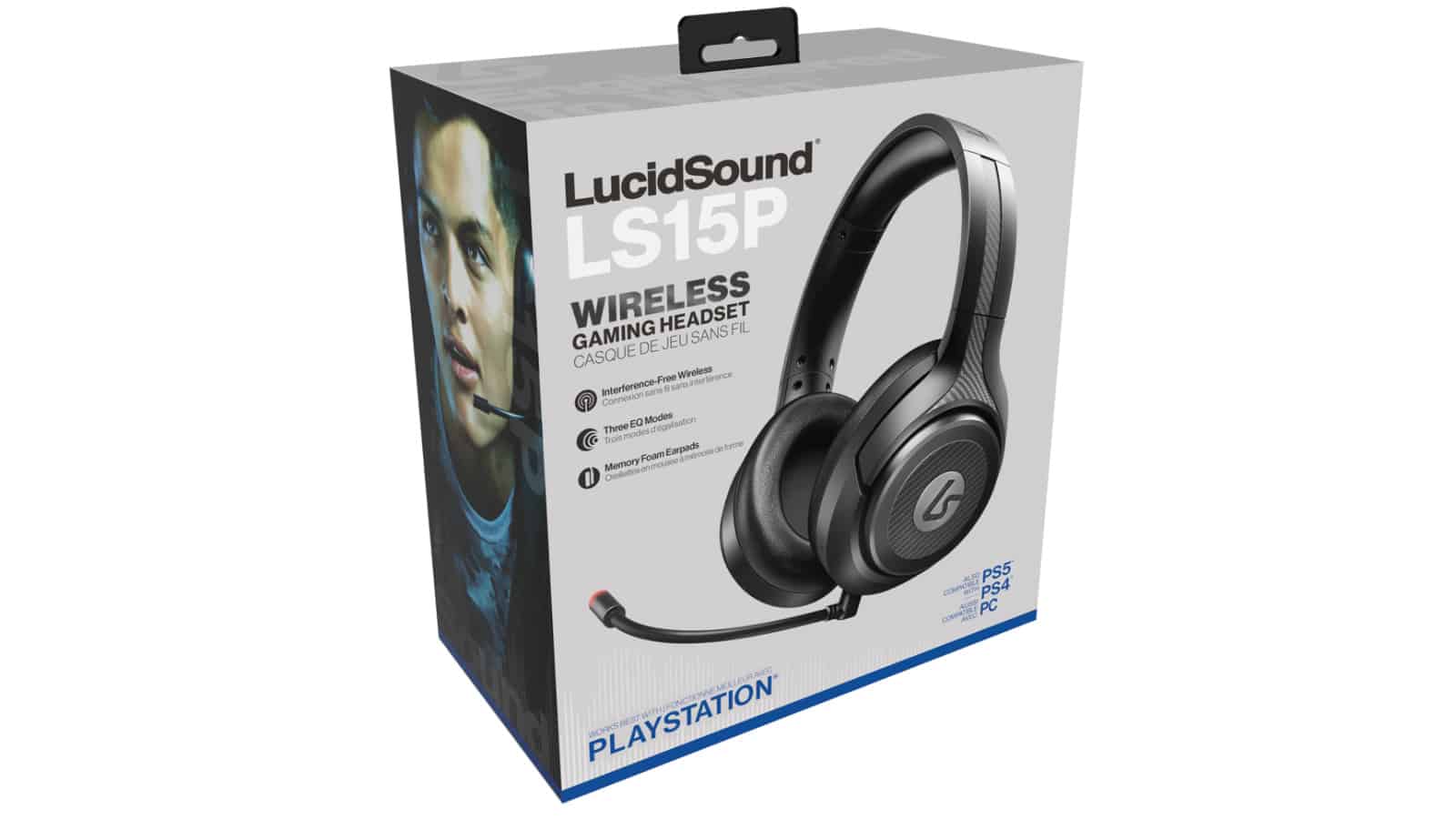 The PS5 is here. And that means if you were able to get your hands on one then you probably want a headset that was meant for it. You could just for the Pulse 3D headset that Sony offers.

But a better option would be the LucidSound LS15P, which is not only designed for the PS5, but it also works for the PS4 and PC. So there's more versatility. It also offers great audio quality and should support the 3D audio feature.

Not to mention it comes with a detachable boom mic that you can put away when not in use. At $99, you're getting a pretty awesome headset that works for multiple platforms. And when compared to the headset we had picked before from Razer, this one is at a better price point which is hard to argue with considering how much you probably already spent on the PS5 and its games.

If you want lossless audio, and you want it to be high-quality, and wireless, the Arctis Pro Wireless from SteelSeries should be your pick.

This works with PC and PS4 via the wireless transmitter that you plug directly into the system that you're playing games on. The Headset then connects to that transmitter.

It's Discord certified meaning your game chat is going to be stellar, and it can be used for other devices that accept Bluetooth audio devices. It also has audio in and out plugs, so you could even plug it into home audio systems if you wanted. It can technically be used with Xbox One, but not wirelessly.

For it to work on that console you would need to plug the headset into the controller's audio jack. Even then there's no guarantee that the mic would work for game chat.

Still, this is the best headset for lossless audio if you need something for both PS4 and PC, and this works for mobile and Nintendo Switch too.

Best Gaming Headset For Gamers On A Budget

Razer is once again on this list for our selection of the best budget headset. We've been big fans of the kraken line simply because it offered some of the best audio quality at a lower price.

And the Kraken X USB is essentially the pinnacle of that. It even comes in a 3.5mm version that's $49.99 instead of $59.99 if you have the hardware on your PC to support 3.5mm audio headsets. That version is also perfect for the Nintendo Switch, and mobile phones with an audio jack.

These feature 7.1 surround sound for more immersive gaming audio, soft leatherette ear cushions and a plushy headband cushion, a bendable mic, and in-headset audio controls. They're pretty basic, but the no-frills setup means you still get great audio for gaming without spending a whole lot.

Razer isn't the only brand returning further down the list. SteelSeries makes all kinds of headsets and the Arctis 1 Wireless is the perfect option for mobile gamers.

This is another headset that's multi-platform, and works with four different systems. While we consider it the best option for mobile specifically, it also works with Nintendo Switch, PC, and PS4.

It has the same high-quality audio drivers as the Arctis 7, ultra-low latency lossless audio, a detachable mic that's Discord certified and features the ClearCast technology (never be unheard again), and of course an adjustable headband for better comfort that's also extremely durable because it's made of stainless steel.

Plus at $99 these are great for the price.

Audeze makes some truly amazing headphones for all situations. And low and behold they actually make some gaming headsets.

While this isn't quite the same level of premium as it's LCD-GX that costs a whopping $900, it's still up there with a premium price and it reflects that price with high-quality audio.

The Audeze Mobius are fantastic for a few reasons if you want something ultra premium. They're wireless, which means you don't have to be tethered to a cord while you play. They're also compatible with PC, PS4, Mobile, Nintendo Switch, and Mac.

You can also connect the headphones in three different ways. Through USB, Bluetooth, or through an analog cable if you want the best sound possible.

These also feature AAC and LDAC, a flexible and detachable boom mic, and they're Discord-certified.

Razer is rooted in Esports. So it shouldn't be a surprise that our pick for the best Esports headset is Razer's Black Shark V2 Pro.

This is a wireless headset so you're unencumbered by long, annoying cords that do nothing but get in your way and brush up against your arm when you're in the heat of the moment, causing the immersion to break.

It also has a detachable mic for when you don't need team voice chat, and it supports THX 7.1 surround sound audio. The best thing about the headset though is the comfort. Whether you're playing competitively or you're playing on your own during your own time, you can wear these all day and not get fatigued.

The giant oval-shaped cushions help you stay comfortable during longer gaming sessions. And the infused cooling gel inside of them helps keep your ears cool and prevent sweat. Or at least excessive amounts of it.

While there are a few wired gaming headsets on this list, none of them can do what the JBL Quantum One can do. In fact none of the other headsets can either. At least not as good.

The JBL Quantum One is a headset that features excellent gaming immersion thanks to spatial audio and head tracking. The head tracking works in such a way that when you turn your head to the left or right, that's the ear that you hear most of the sound from. Just as you might if you turned your left or right ear towards sound coming from the right or left.

It also has active noise cancellation. Once this is on you really can't hear anything but what's playing through the headphones. It's quite amazing when you're knee deep in a game. If you need to talk to someone in the real world though, you can still leave the headset on thanks to the noise pass through. There's even a dedicated button for it.

Press it, and the headset will almost entirely mute the audio of the game and your chat, and let in noise from the world around you. It's rather clear too. This lets you talk to anyone in the real world who might need your attention for a few minutes, then quickly jump back into the game once you can get back to it.

Of course it also has things like a detachable Discord-certified microphone, RGB lighting, and the connection port is USB-C. Rounding out the big features are a super comfy adjustable headband and swivel ear cups.

HyperX has been around making gaming headsets for quite some time and the Cloud Alpha is one of its best.

This is a wired gaming headset and like many of the models HyperX makes, it features an aluminum frame so it's pretty durable and still very comfortable.

It also works with just about every platform, comes with dual chamber drivers, and large comfy earpads so you can wear these for long gaming sessions.

Advertisement
Trusted By Millions
Independent, Expert Android News You Can Trust, Since 2010
Publishing More Android Than Anyone Else
27
Today
170
This Week
117
This Month.
8289
This Year
109761
All Time
Advertisement