You may want to record some of your calls for various reasons. Most people record voice calls for security reasons, of various kinds, while others want to keep them as a memory, and cherish them. There are all sorts of reasons you may want to do that. Whatever the reason may be, we’ve highlighted some of the very best call recorder Android apps in this article, for you to check out.

There are 10 applications listed below, and they’re not listed in a specific order. Do note that these are only our favorite call recorder applications. Your list may be entirely different, as there are a number of additional apps available in the Play Store. Below, you’ll find a lot of information about each of these apps, including descriptions, cost, a required Android version, and more.

Below is a quick overview of the top 10 best call recorder Android apps for 2021, including any download and in-app purchase costs. 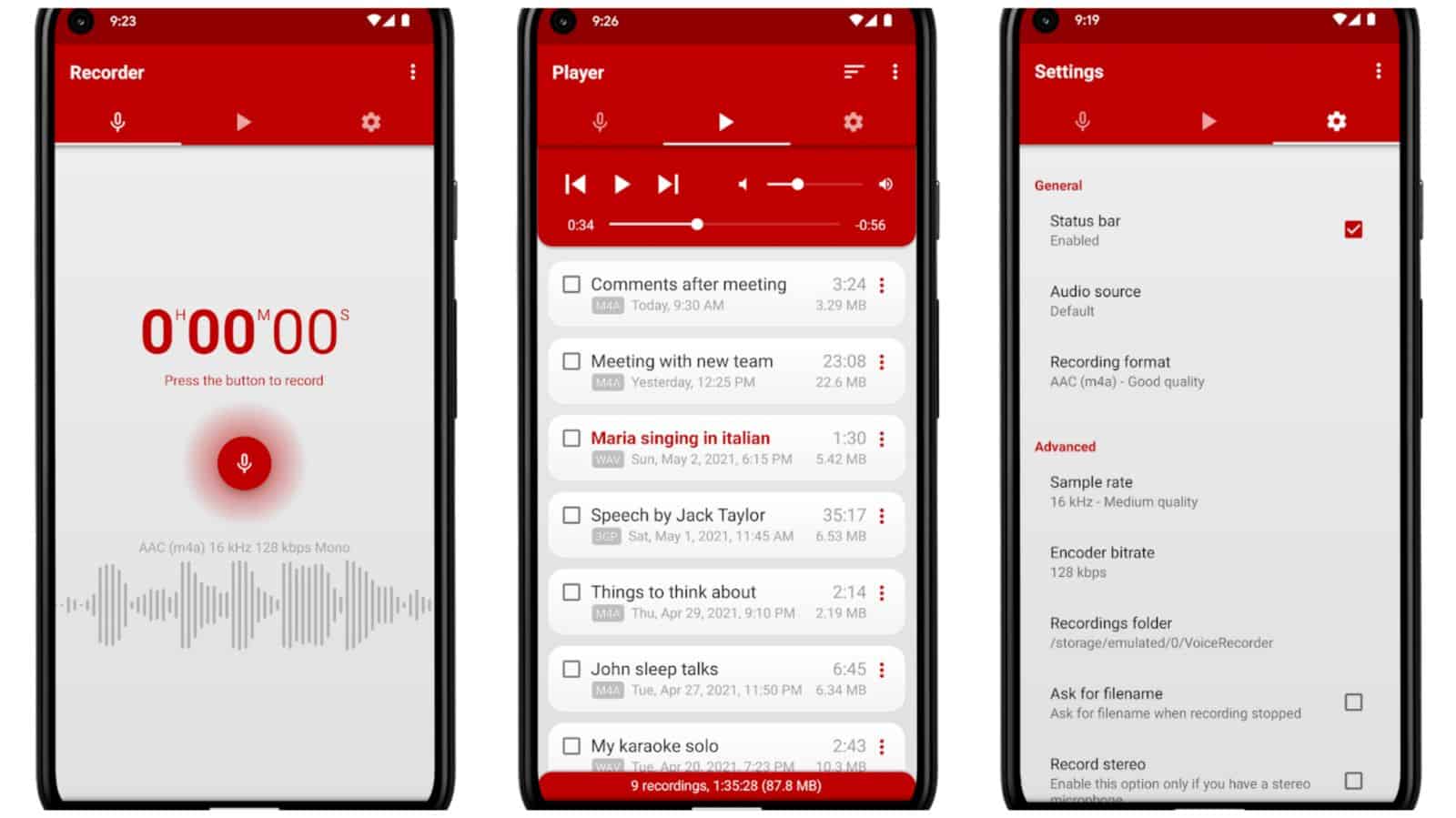 Voice Recorder Pro is easily one of the best call recorder apps in the Play Store. This is one of our personal favorites as it offers everything you may need. First and foremost, this app looks really nice. It doesn’t try too hard to look great, which is a good thing. It’s simplistic, easy on the eyes, and easy to use on top of that. You’ll notice three different tabs at the top, and that’s basically everything you need.

This is both a voice recorder and a call recorder, which is the case for most apps on the list. This app offers a ton of settings and features. It supports both stereo and mono recording, while you can change the bitrate as well. There are four different audio formats that you can choose from as well. The developer does note that the app may not work on some devices, as it’s not a dedicated call recorder app. We didn’t have any issues, though. 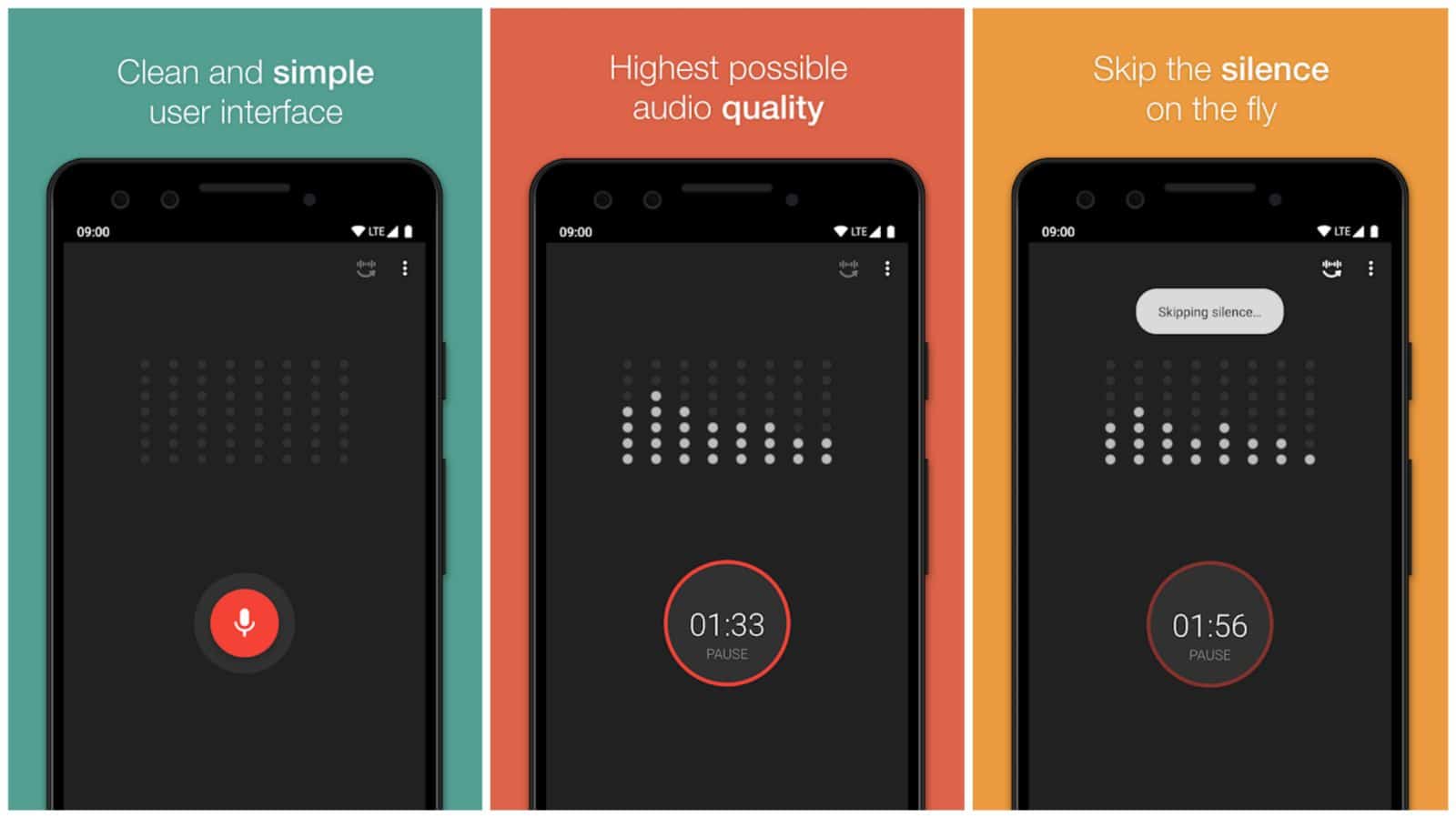 Smart Recorder by SmartMob is easily one of the best-looking call recorder apps we’ve used. This app looks great. It doesn’t really have too many UI elements, nor anything of the sort, and yet it looks great, and it’s easy to use. The design is ‘clean’, that’s the best way to describe it. This app is also both an audio recorder, and a voice recorder. Same as with the app before it, this is not a dedicated call recorder, so some OEMs may block it from recording voice calls.

In any case, the app comes with a live audio spectrum analyzer, Wave/PCM encoding with adjustable sample rate, and can record in the background, when the display is off. It has a microphone calibration tool, and it gives you a chance to quickly review is the recording any good. It also has built-in sharing so you can share your recordings with ease. This app doesn’t bring a ton of features, but it does the basics really well. 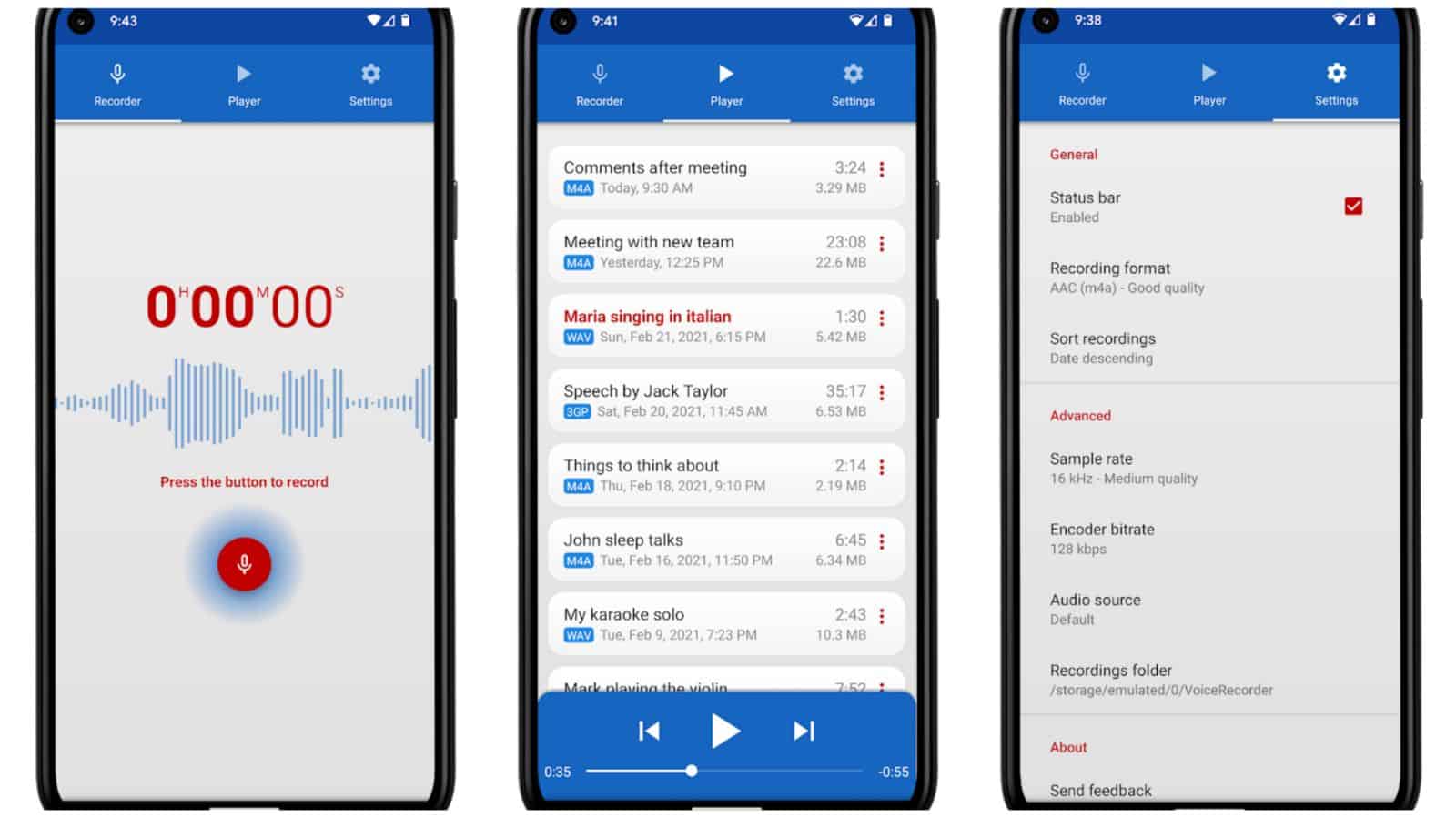 Voice Recorder by Splend Apps actually looks somewhat similar to the Voice Recorder Pro we already talked about. This application also has three tabs at the top, for navigation purposes. It looks very simplistic, and nice at the same time. Even the description is quite similar. When it comes to functionality, these two apps are also extremely similar, as if they were made by the same developer.

This app also offers a changeable bitrate, and four different audio formats that you can choose from. It has the live audio spectrum analyzer, and customizable recordings folder. It can record audio even when the display is off. This is also not a dedicated call recorder application, so do note that some of you may not be able to record voice calls with it. Most of you shouldn’t have a problem doing so, though. 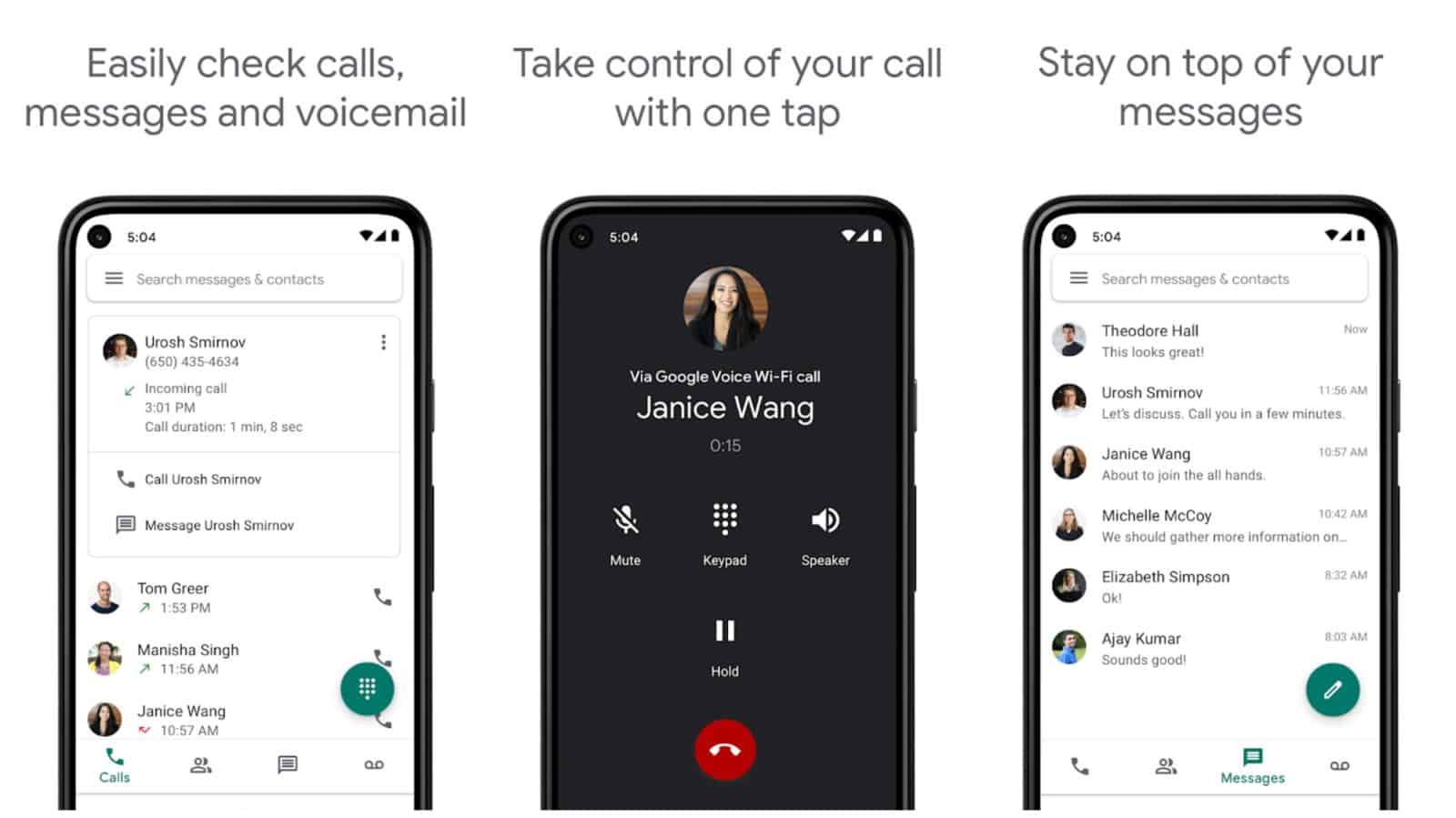 Google Voice may not be the first app you think of when it comes to voice recording, but this app has that feature. Google even has a tutorial on how you can record voice calls with the app, and it’s simple. All you have to do is hit the menu button, tap ‘Settings’, and under ‘Calls’, turn on ‘Incoming call options’. Do note that you can only record incoming calls with this application.

Google Voice is also region-locked, so many of you probably can’t even use the app. If you can, and you don’t mind this rather obvious limitation, it’s a really nice option for recording voice calls. The app does look very nice, as you’d expect out of a Google-made app. It’s not exactly our first choice when it comes to recording voice calls, though, mainly due to that obvious limitation, and limited availability of the app itself. 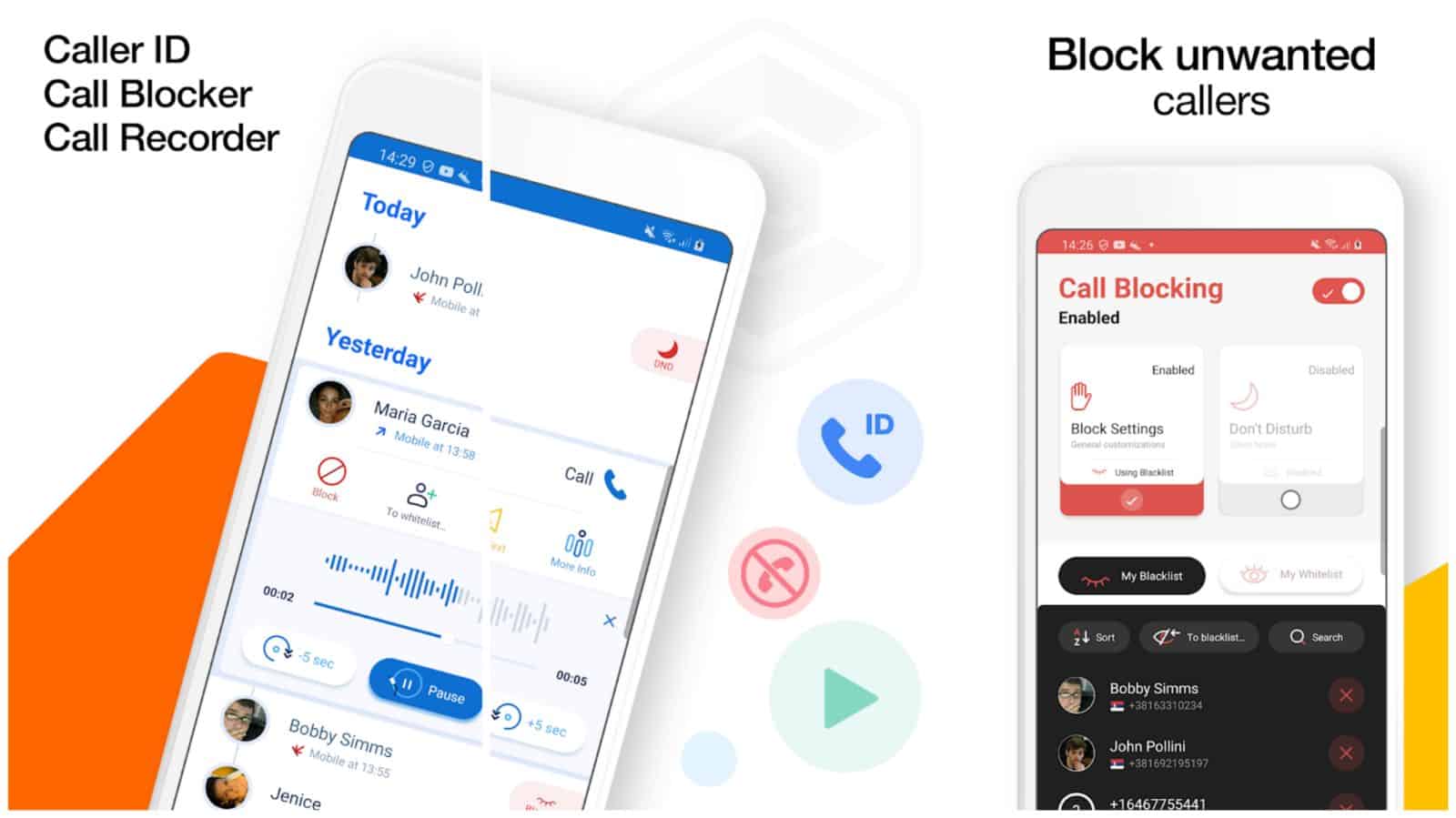 CallMaster is a call recorder that is packed with features. This is actually a dedicated call recorder, not a voice recorder first. This app can not only record your phone calls, but it can block spam calls, filter your calls, and show caller ids for unknown callers. You can set it up to automatically record all your incoming and outgoing voice calls, if that’s what you need / want.

This app can come in quite handy if you’re receiving a lot of telemarketing, spam, and robocall calls. In this day and age, chances are that many of you are. An app like this will prove to be invaluable if that’s the case. The app’s UI also looks really nice. It’s modern, clean, and all the features the app offers are well-sorted, so it’s not a headache to use them. If you’re looking for an app that focuses entirely on voice calls, try this one out. 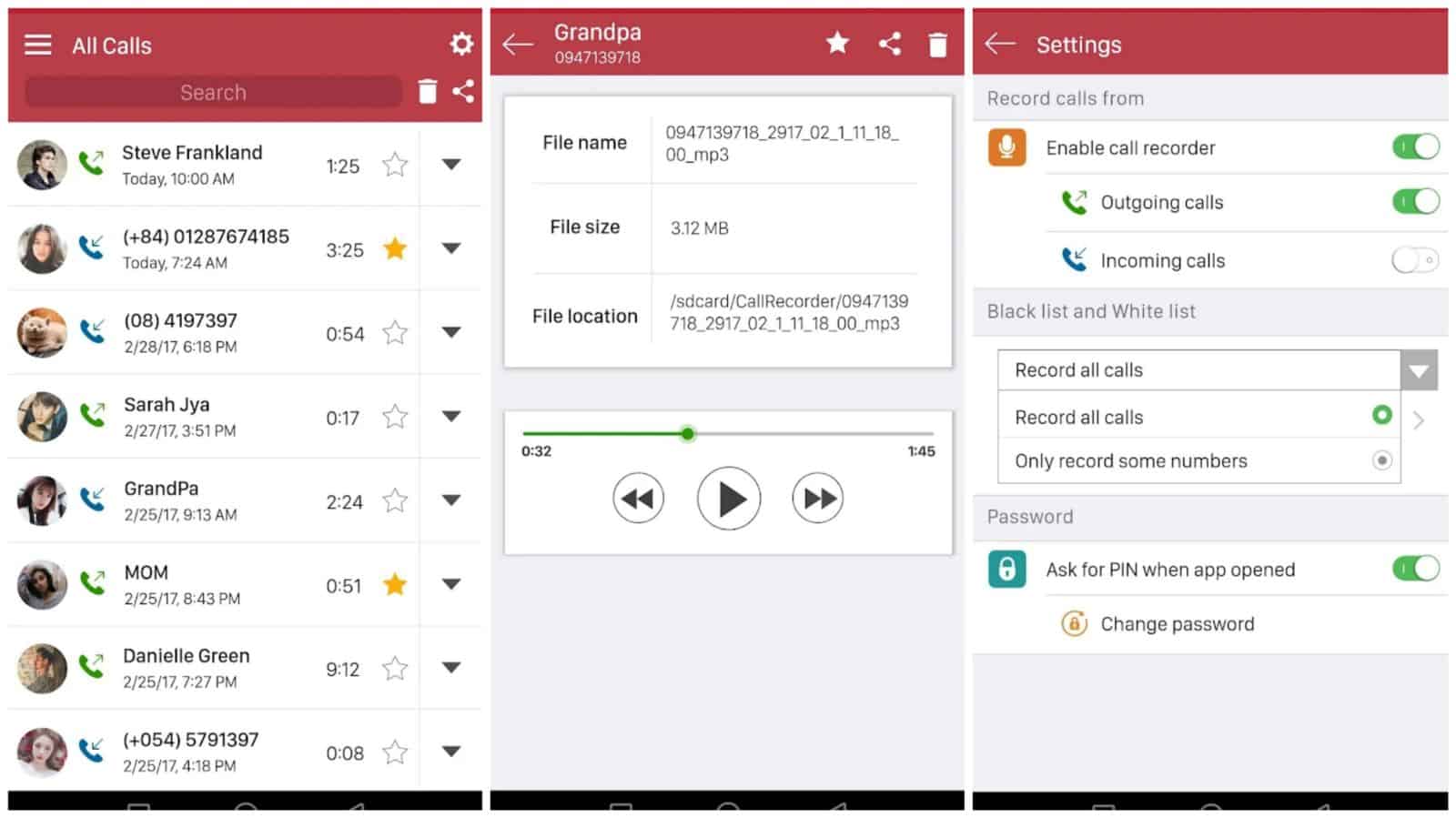 Automatic Call Recorder is completely free. There are no in-app purchases here that you should worry about, though there are ads. The app’s design is extremely simple, pretty much everyone should be able to use it without a problem. This is a dedicated call recorder app, by the way, it’s not a regular voice recorder. You can choose between several recording formats in the app.

In case you’re worried about security, you can also set up a password for your recordings. On top of that, the app does come with cloud support as well, and it allows you to save recordings directly to an SD card, if you want. You can set it up to record all phone calls, automatically. You can also create a blacklist of numbers, in other words, numbers that will be ignored by the app, for which calls won’t be recorded. 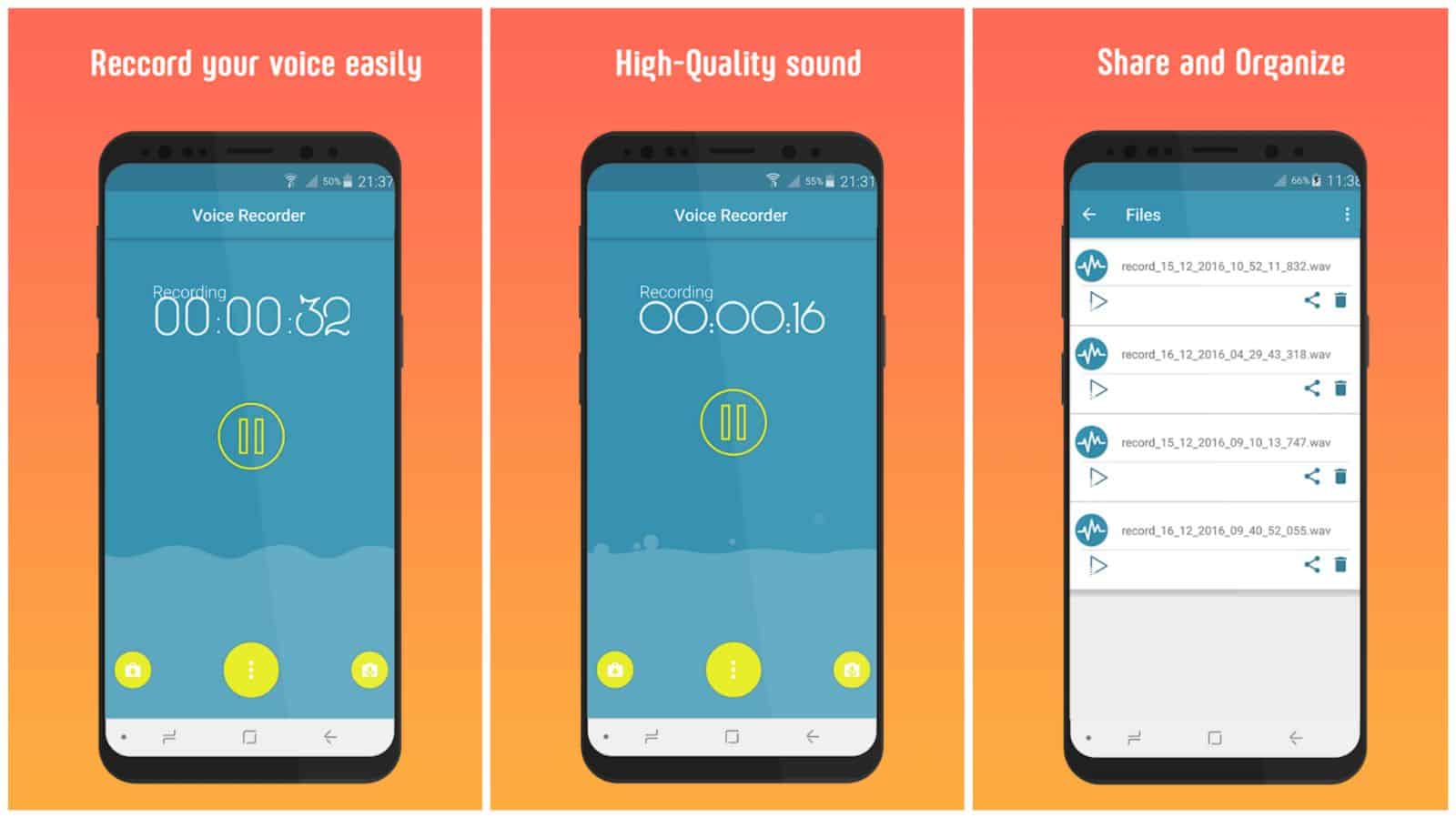 Smart Voice Recorder is an app that comes with a bunch of audio codecs. This is also an app that looks really nice, without trying too hard. This is, first and foremost, a voice recording application. You can, however, choose to record your voice calls with the app, if you want, without a problem. You simply have to choose a different audio source, change it from a microphone to a phone call.

The app can record in HD, and it can record while your display is off as well. It supports both stereo and mono recording, while it also allows you to adjust the sample rate. It offers a microphone calibration tool, and so much more. This app actually has quite a few features included.

Otter is not exactly a call recording app, not at all. It’s adjacent to such apps, though, which is why we decided to include it on the list. I’ve used Otter in the past, and it can be quite handy, as it’s a great voice notes tool. It allows you to record voice notes, listen to them, organize them, transcribe them, and more. So, you can essentially import your recorded voice calls to this app, and get going.

If you need to transcribe some of your voice calls, this app can help. It offers you 600 minutes of transcription for free, per month. If you need more than that, you can always opt for a subscription. Most of you probably don’t need to cross that line, so you can use this app for free, without a problem. The app is extremely simple, as it should be, and it works really well. 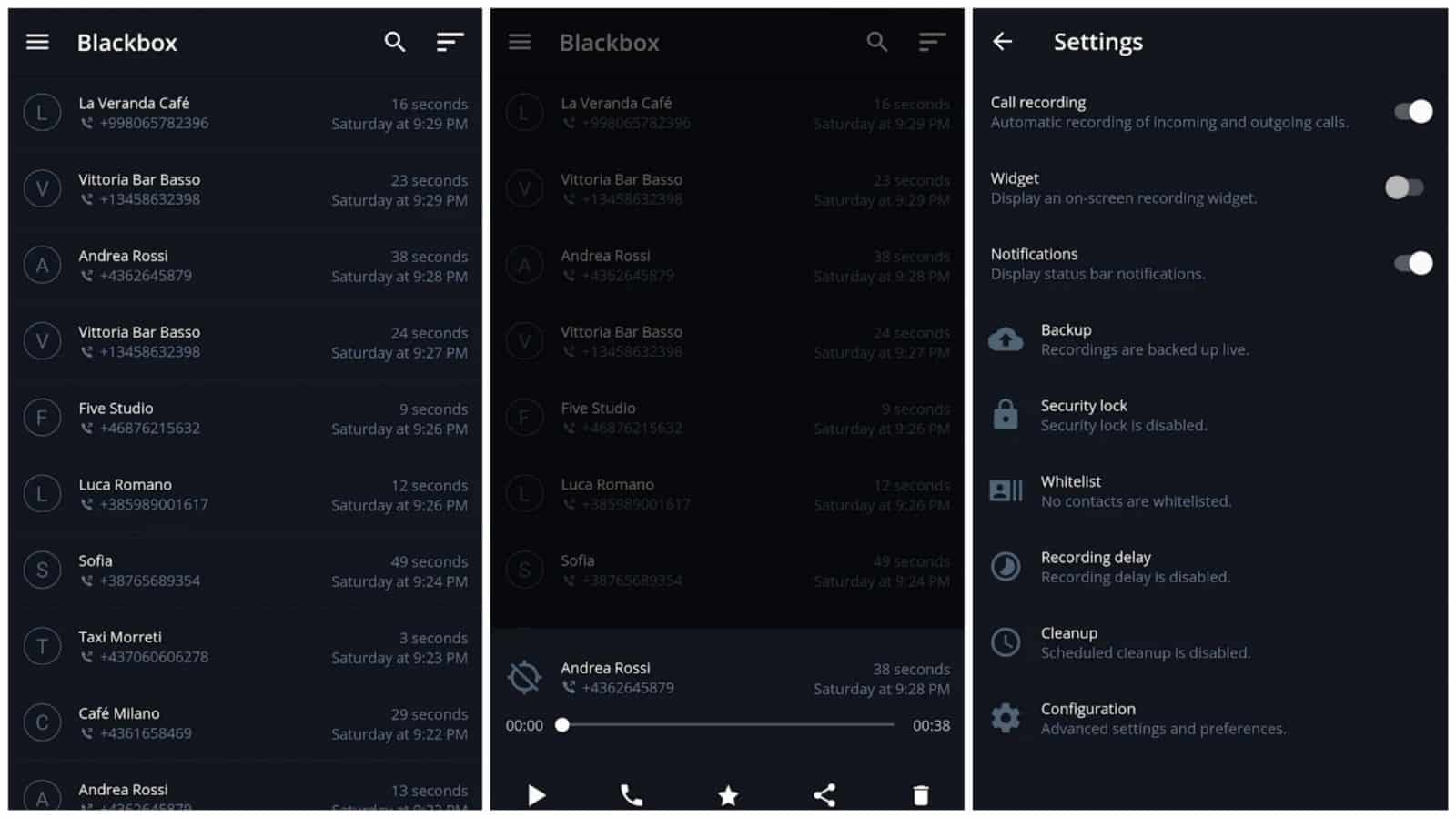 Blackbox is an extremely simple application. If you’re looking for simplicity, this is the way to go. Now, even though this app looks bare-bones, it does offer quite a few options on the inside. Not too much, though, you can still qualify it as a really simple app in both design and functionality departments. The app allows you to use a password in order to lock it, so that nobody else can access it, even when the phone is unlocked.

You can clean up older recordings by setting up an automated schedule. There is a global search within the app, so you can search through your recordings whenever you want to. The app does support Bluetooth devices, and dual SIM devices as well. You can favorite specific recordings, while a widget is also included in the package. There are more options included here, and you can read about them by hitting the link below.

Cube ACR call recorder has great cloud services support. On top of that, it not only works with regular voice calls, but VoIP services as well. In other words, you can record calls from Skype, WhatsApp, Viber, Telegram, Slack, and more. It has all the standard features you’d expect out of a call recorder. All the sorting / organization features, playback features, and so on. You can even choose the recording quality, if you want to.

This app also comes with a blacklist of sorts. It allows you to select contacts for which you don’t want the app to record calls for. On the flip side, you can only select a couple of contacts you actually want to record voice calls for, in other words, it offers a whitelist as well. You can opt to lock the app by using a PIN lock, and so much more. There are quite a few features included here, actually.