Since Portal is an all-new offering (mostly) from EA, there’s a lot to know about what the mode is like and what it actually is. Thankfully, this guide will break down everything there is to know about the mode so you’re prepared for it when Battlefield 2042 releases this Fall (The game has now been pushed back to a November 19 release date).

While there may be more details about Battlefield Portal closer to the release, it seems most of the official information is already out there. If you’re curious about any of the mode’s details, check everything out below.

What is Battlefield Portal? 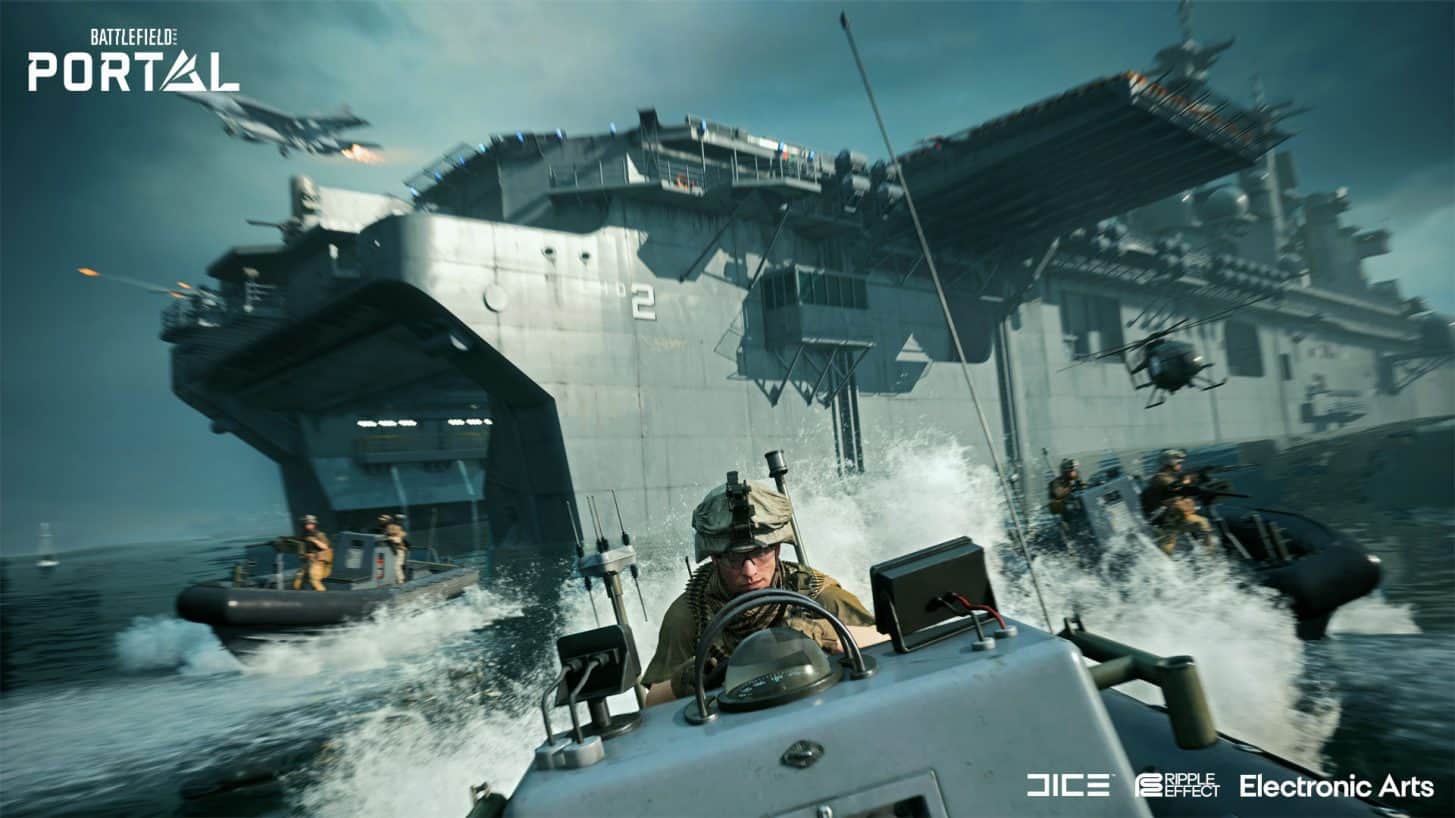 Battlefield Portal is an all-new mode coming to the franchise with Battlefield 2042. Unlike the other modes in the game, Portal will let players create their experience for the match in just about every way. From maps to arsenal to victory conditions. Players have nearly complete control over every aspect.

With that much control in the player’s hands, it should lead to some very interesting gameplay experiences. And it’s all the better because players can share those experiences with other players. This is Battlefield Portal at its most broad. But there really is a lot more to it than this. So let’s break it down even further.

What are the types of things players control?

Battlefield Portal lets players control almost everything. As noted above, you can choose the maps, the arsenal that players have to use, and even the victory conditions for winning. In addition to that players can set up and tweak a ton of other match elements.

Players can choose the factions, the character mobility, visibility, and even the scale of the match by adjusting how many players are on each team. Most of these things are controlled in the settings for Portal. Except for the victory conditions, which is part of the Logic Editor feature.

These aren’t all of the things that players will be able to adjust either. There will be more things to change in the settings. Which players may have to wait until release to find out. According to EA, the adjustable settings for the mode that it has already revealed is just a “tiny portion” of what will be available to tweak.

So expect a whole lot more control over various aspects of the experience you create once the game actually launches. That being said, this is also a live service game. So that leaves room for EA to tune things as needed. Which could lead to new settings being added or some being taken out or dialed back a bit.

All currently confirmed settings that players can adjust:

So far, here’s everything that’s been revealed for adjustable settings.

What are the Battlefield Portal limitations

EA says there will be some limitations to the mode. While it’s possible that EA hasn’t revealed every single limitation, there are at least a few things below worth knowing.

EA has confirmed that you won’t be able to build a battle royale mode. Which probably means that Portal is limited to a smaller number of maximum players for the entire experience. Potentially no more than 64 players in total.

You can’t edit the maps

It also isn’t possible to edit the maps. So while you can adjust the amount of players on the map up to a certain amount, the map itself cannot be edited in any way.

You can’t edit assets like player and vehicle models

There’s no way to edit assets like the specialists or vehicle models. So that means no hyper-custom helicopters or super unique uniforms for the specialists. Everything will have to stay as-is.

There could be even more limitations in Battlefield Portal

EA may have more limitations for Portal but it hasn’t mentioned anything specifically at this time.

What are the factions in Battlefield Portal? More gameplay experiences like this one can be created by players.

There will be preset modes included

While the bulk of the new Portal mode is about player-created activities, there will also be preset modes that are included. Players will be able to engage with these modes or create their own unique experience.

Players can share their creations with other players in Battlefield Portal

Don’t keep all that fun and excitement for yourself. If you create something that you think other players might enjoy, share it with them.

EA has made it possible to share all of your player-created experiences with other players. After you’ve created a gameplay mode inside of Portal, you can grab a shareable link that you can give to others. With this link, players can either play the experience as it was intended by the creator, or they can edit it with their own take if the creator allows edits. 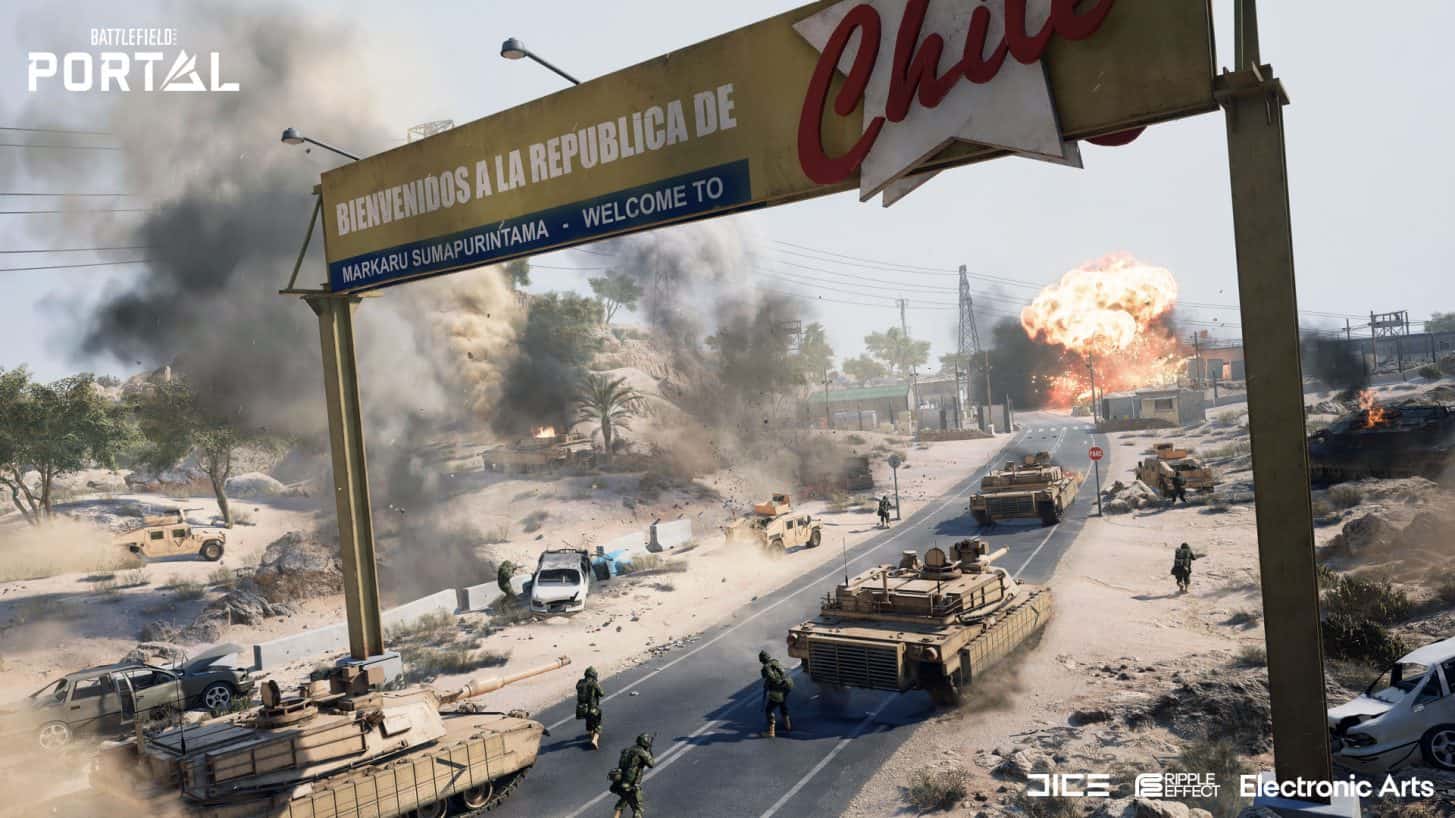 EA will feature the most popular experiences

EA will be sitting back and taking notice of the most popular experiences that are created. It will then features those experiences in curated playlists to make them easier to find for all players. So if you want your experience to shine, try to create something unique and exciting that continues to keep players engaged.

Experiences in Battlefield Portal can include AI

It’s possible to add AI players to be used as backfill, just in case there aren’t enough players engaging with a particular experience. You can also disable this feature if you want all live players.

But having the AI in place can ensure that teams fill out with the proper number of players that was intended. So consider using it if there aren’t enough players joining the experience initially. Or, turn it on from the beginning.

Creators will have admin tools at their disposal

The internet is full of trolls and there are plenty of people you may sometimes want to avoid in your gaming experiences. Thankfully you’ll have some controls in this regard too, because community experience creators will have basic admin tools. As an example, you’ll be able to ban certain usernames across any of your experiences. That way if you have a particularly troublesome player that has joined in one or more of them, you can ensure they no longer get to play any of your experiences in the future.

What is Battlefield Portal’s Logic Editor? 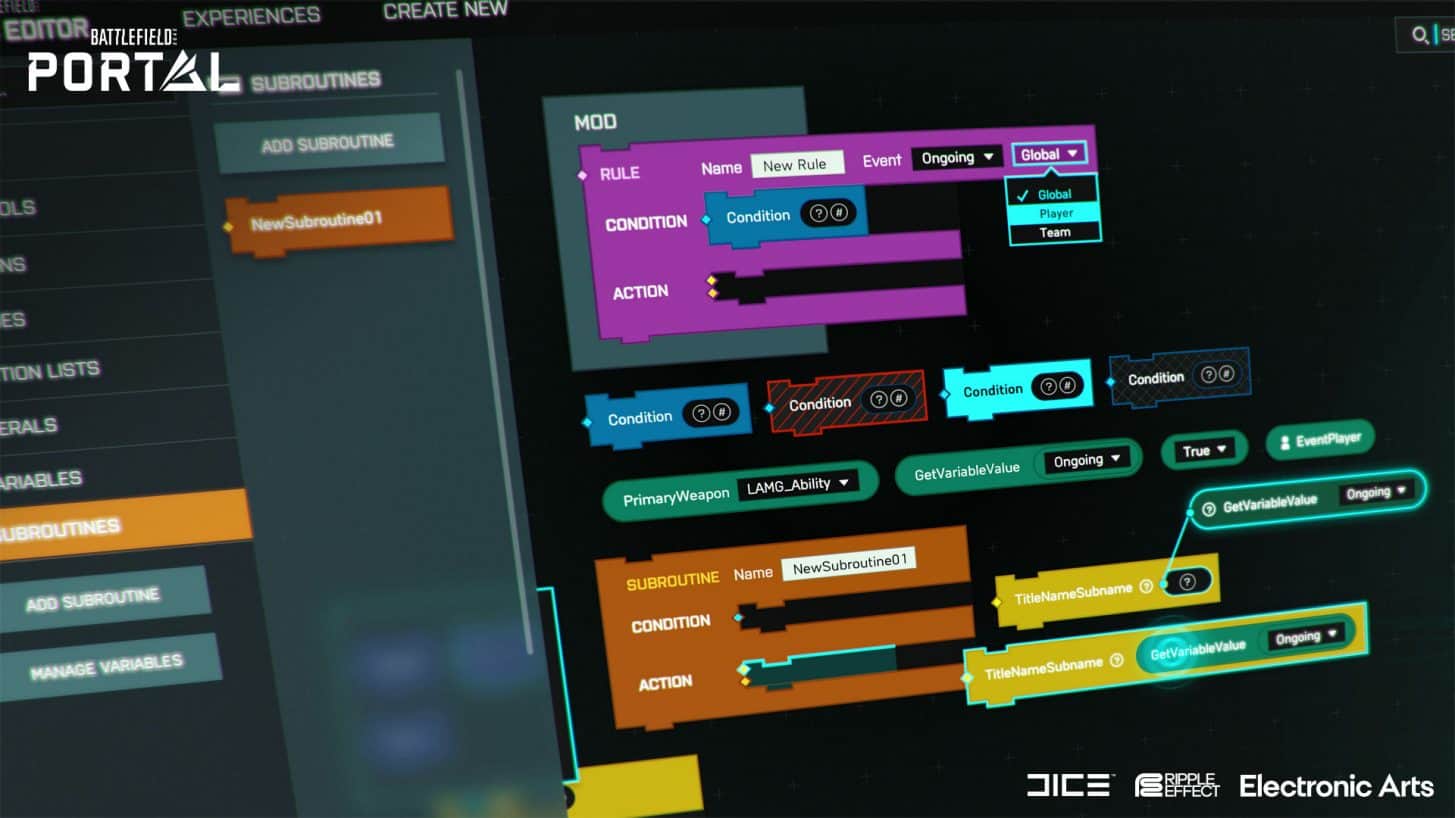 In short, the Logic Editor is a tool within Battlefield Portal that gives you additional control over your experience creations. EA says that this was intended for people with prior knowledge on visual scripting logic. But anyone can use the Logic Editor.

For instance, you can use the Logic Editor to set the conditions for victory. Like potentially getting a certain number of kills in a specific amount of time. You could also use this tool to set punishments for death, or rewards for getting kills. You can even set whether a certain rule you’ve added is global, team-based, or player-based.

Progression in Portal is synced with the rest of the game

Progression of your account will be synced across the game. So if you play a lot in Portal but not so much the other modes, that progression will count towards the rest of the game too.

This should allow players to play their favorite modes without having to devote a significant chunk of time in a mode they don’t enjoy.

What classic maps, weapons, and vehicles will be available at launch? 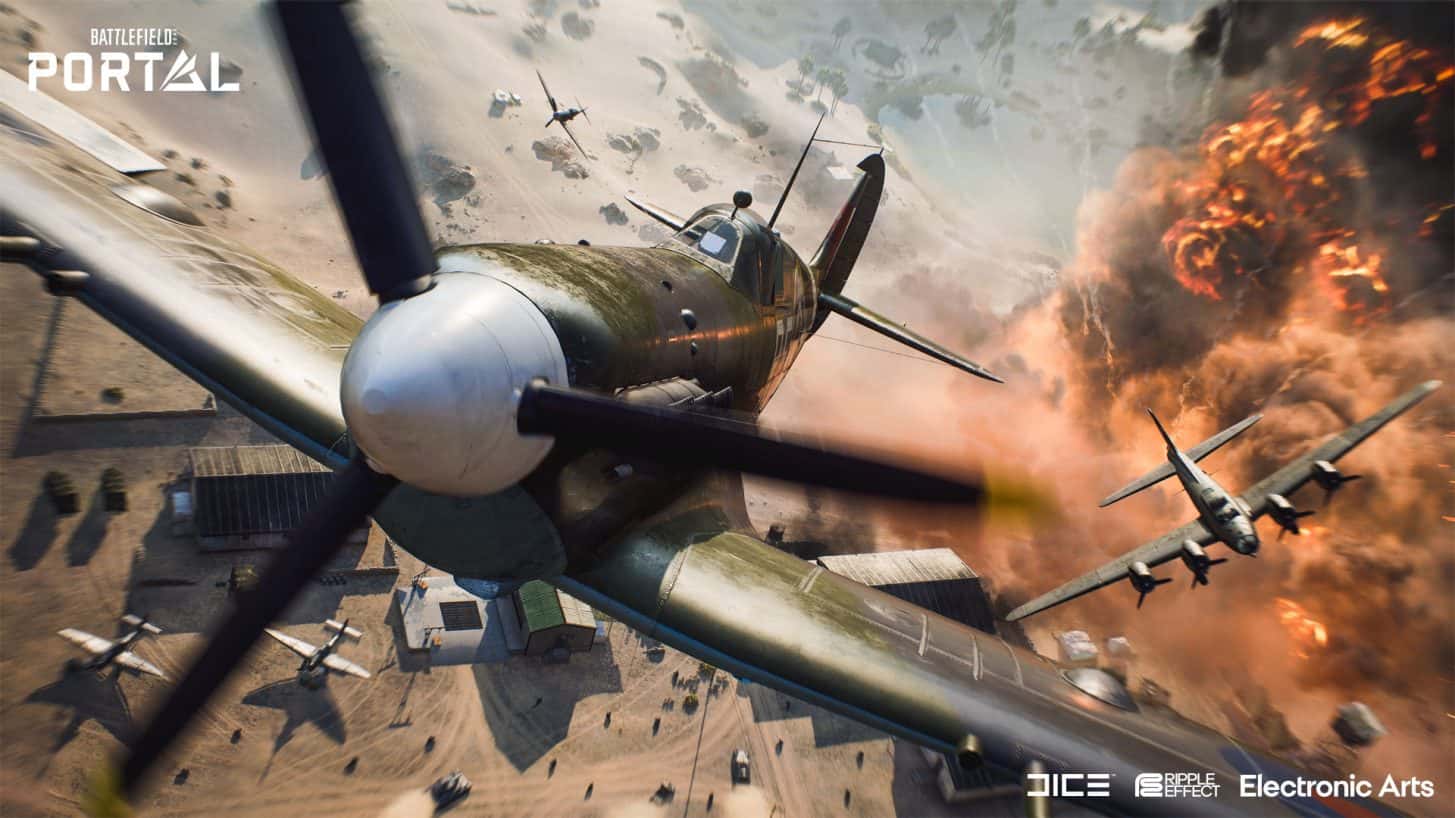 At launch, Portal will include these classic maps:

More classic maps are likely to be added post-launch of the game, so players will want to keep an eye out for new maps later on. Outside of the classic maps, Portal will include all of the new maps from Battlefield 2042. Players will also notice the return of era-specific weapons and vehicles. Like the M1 Garand, the M416, the Spitfire, and the B17 Bomber.

How many weapons, vehicles, and Gadgets will there be?

A lot. To say the least. There will be over 40 weapons, over 40 vehicles, and over 30 gadgets. Some of the weapons that will be available in Portal, as well as Battlefield 2042 in general will include the ones mentioned above, as well as the Panzerschreck and the G3.

As for vehicles, you’ll get to fly around in vehicles like the Spitfire or B17 Bomber, or choose vehicles like the new Quad Bike or Little Bird. When it comes to the gadgets, a few examples include the MAV and Radio Beacon, as well as the Defibrillator and EOD Bot.

Battlefield Portal is part of Battlefield 2042 as a whole. It’s also going to be part of the live service updates that are pushed out by EA. This means when the overall game gets new features, new maps, new vehicles, new weapons, specialists, and more, all of that will be available to include in community-created experiences within Battlefield Portal.

This will keep the mode fresh and provide what is likely to be an ever-growing collection of experiences to play. Especially given the amount of things you can adjust, and the fact that you can share those experiences with others who can also add their own edits.

EA doesn’t mention how frequent the live service updates will be made, but then again that’s to be expected.