AT&T is one of the only cable companies that has really embraced cord cutting. Perhaps a bit too much. AT&T offers a boat load of different live TV streaming services. Including AT&T TV NOW, AT&T Watch TV, AT&T TV (which is sort of a hybrid between cable and streaming) and of course HBO MAX. Along with DIRECTV which is not a streaming service, but still available.

Today, we’re going to be talking about AT&T TV NOW. This is the most popular streaming service from AT&T, and it’s actually really competitive with the other streaming services on the market. Even though it doesn’t look like it, at the first glance.

It costs about the same amount as Hulu + Live TV, FuboTV and YouTube TV. Making those the best competitors to compare AT&T’s TV NOW service too.

What is AT&T TV NOW?

AT&T TV NOW is a rebranded streaming service, having initially been DIRECTV NOW, until 2019. Which is when AT&T “streamlined” this offering, pairing it back to just a couple of plans, and adding in some premium channels like HBO, Cinemax and Starz to the plans.

It is aiming to replace your cable or satellite TV service, and it’ll allow you to watch your content outside of your home – unlike most cable services. There’s no equipment needed for TV NOW. Actually, there is some equipment needed, but no additional equipment. For instance, you will need a WiFi connection and a device that is compatible with TV NOW for watching.

As mentioned already, AT&T has a lot of different streaming services, all with very similar names. Like AT&T TV and AT&T TV NOW, which are similar in name, but not similar in service.

AT&T TV is basically your standard cable experience – it replaced U-Verse. It runs on an Android TV box that AT&T will provide you with. You can still watch content on your smartphone, tablet, and other devices – even before the Android TV box arrives. And it comes with HBO MAX included on all of its plans. It offers a very easy set-up process, and there’s no professional installation included.

AT&T TV NOW on the other hand, is more aimed at cord cutters. The biggest difference between the two is that AT&T TV NOW doesn’t send you an Android TV box – in fact, it doesn’t even work on Android TV. And it has less packages, with fewer channels. Unlike AT&T TV, AT&T TV NOW does not have any sort of annual contract. Meaning that you can leave whenever you want. AT&T TV on the other hand does have a contract, so you will need to pay some fees to leave early – that is also why there are so many discounts for your first year of service with AT&T.

The two are eerily similar, but also very different. AT&T really needs to re-think its naming for its streaming services – or just cut some of them, so they aren’t so confusing.

There are basically only two different packages. There is the Plus package with 45+ channels, and then Max with 60+ channels. There are a small handful of channels that are different between the two. But Max also includes premium channels like HBO and Cinemax for free.

There are a couple of other packages available if you really want a lot of channels. Like Entertainment, Choice, Xtra, Ultimate and Premier. Which range from $93 to $183 per month and up to 140 channels. But most opt for Plus or Max. As they offer the channels most want, and at a price most are willing to pay.

You can check out how these two packages stand up to each other in the table below.

Do you get local and regional channels?

AT&T TV NOW is also one of the only streaming services that still offers Fox Regional Sports networks. It appears that AT&T has not had to renegotiate its deal with Sinclair on those channels just yet. So it is still available through AT&T TV NOW. But it is unclear how much longer that will be the case.

And in most areas, you will also get your usual locals like ABC, NBC, CBS, Fox and My Network TV. That will depend on whether or not the company that owns the local affiliates, has made a deal with AT&T to carry it on AT&T TV NOW. But in most markets all of the local channels are available. So you won’t need an antenna to get them. That’s another thing that differentiates itself from Sling TV.

You can check out which regional and local channels are available in your area by clicking here, and inputting your zip code. 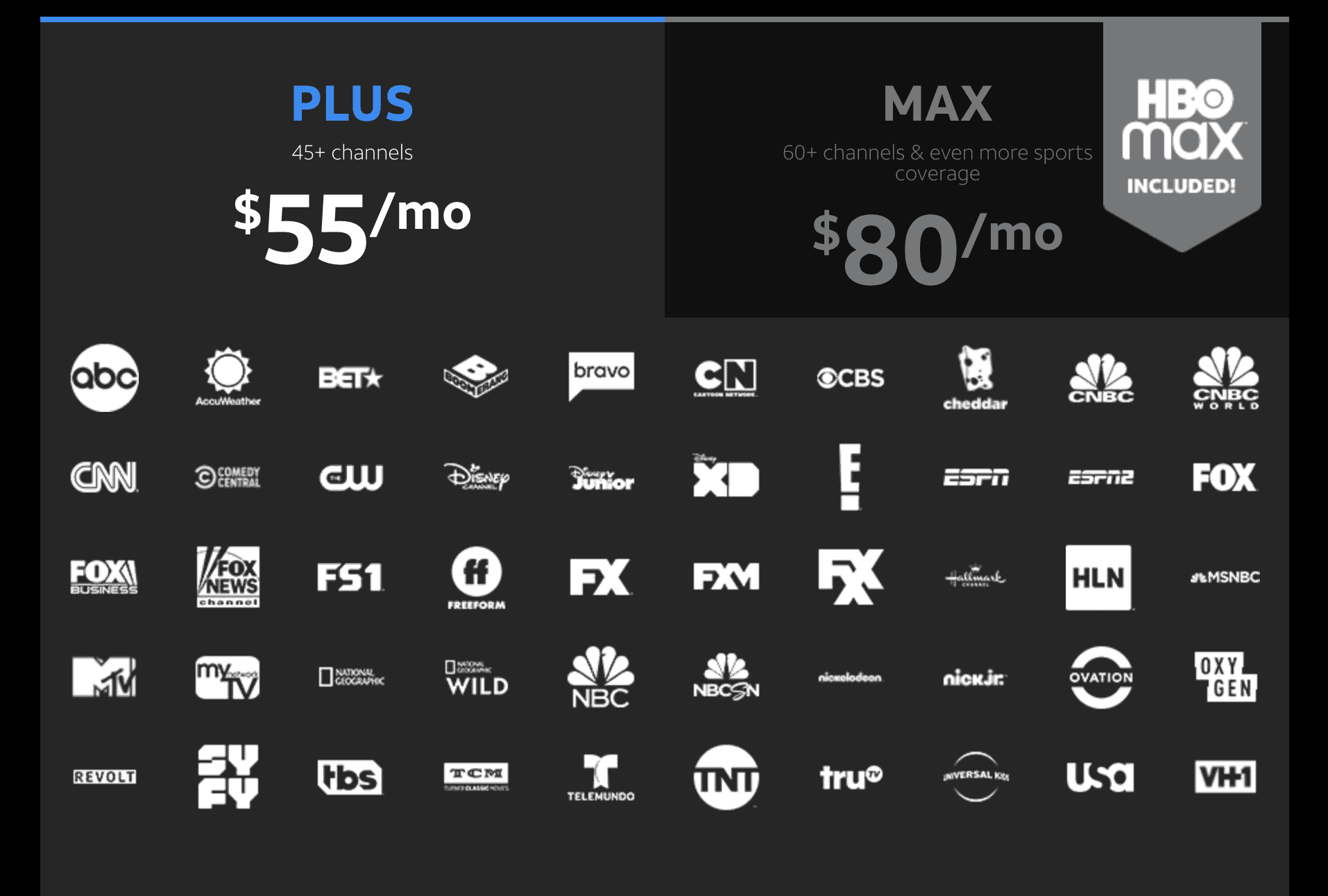 How much does AT&T TV NOW cost?

As mentioned above, AT&T TV NOW comes in the form of two different packages. Plus starts at $55/month, with Max starting at $80/month. Considering you are getting HBO and Cinemax included for $80 per month, the Max plan is definitely worth checking out, if you are interested in both of those premium services.

AT&T TV Now does offer some add-ons that you can add to your experience, and get even more content to watch.

Add-ons are available for both plans. Though, HBO and Cinemax are not available on the Max plan since they are included already.

There are a couple of other add-ons that are lesser-known. Like AT&T TV NOW DEPORTES for $5/month and AT&T TV NOW ESPAÑOL for $15/month. These offer 5 and 15 channels additionally. There are also Vietnamese, Brazilian and Korean packages available. Vietnamese is $20/month while the other two are $30 per month.

Since AT&T TV NOW isn’t really that new, it’s actually been around for nearly five years as DIRECTV NOW and only about a year as AT&T TV NOW, it does support a lot of devices. And it’s very likely that you have at least one device on this list of supported devices.

Here are all the devices that AT&T TV NOW supports:

There are a few omissions here. Like Android TV, PlayStation and Xbox (both the previous generation and current generation models).

What do I need to get started?

All you need to get started streaming with AT&T’s TV NOW is an internet connection and one of the devices listed above. And it is very likely you have at least one. Since you most likely have a smartphone.

Just download the app from the appropriate App Store. Log into your account, or sign up for AT&T TV NOW. And you’ll be able to start streaming in just a few minutes. It’s very easy to get set up. And you can also download it to your TV or tablet, as well. So you can watch it in the living room, or in your bed. Instead of just on your smartphone. Which has a pretty small screen anyways.

What features are available with AT&T TV NOW?

AT&T TV Now doesn’t have as many features as some of the other streaming services on the market. It is actually banking on its channel lineup, which although it does seem pretty small, it has a lot of channels that its competitors do not have. Like the ViacomCBS channels – those include BET, Comedy Central, Nickelodeon, Nick jr, MTV and VH1. As well as including premium channels like HBO MAX and Cinemax in its more expensive plan.

But, AT&T TV Now does offer some great features to go along with those channel lineups. Like Cloud DVR, and the ability to stream on up to three devices at the same time. Which can be very useful for larger families.

AT&T TV NOW offers Cloud DVR on all of its plans. It is not an added fee, or one that can be upgraded for more hours. Everyone gets 500 hours of cloud DVR. It’s still not unlimited like Philo TV or YouTube TV. But 500 hours is a pretty significant amount of space.

You can record up to 500 hours of content and it’ll remain in your account for up to 90 days. So unfortunately, you can’t record content and keep it in your DVR for months on end – something that YouTube TV users do quite a bit.

Not quite the best cloud DVR offering we’ve seen among the live TV streaming services, but it is pretty decent – especially since it is included in the price.

It’s pretty common among the live TV streaming services, to offer up to three screens at once. And that’s what AT&T offers too. So you could also share the service with someone else. Or have it playing on multiple TVs in your home at once.

The only downside here is that there is no ability to increase those screens to five or even unlimited. Something that Hulu + Live TV does offer. However, for most people, three screens is going to be plenty.

If you’re one that travels a lot, then AT&T TV NOW is still a really good option. Since you don’t need to be at your home address to watch it. You can stream it on your tablets, smartphones, or your TV. No matter where you are.

However, it is important to remember that if you do travel to another city, you will lose your locals. But you should get the local channels available in the market that you are currently in. Which is still really nice to have. You can also use AT&T TV NOW internationally, but only if you have a VPN service and are connected to a US server. So keep that in mind if you do a lot of traveling.

Is it worth it?

It depends on your use-case, and what channels you watch. But as a whole, AT&T TV NOW is definitely worth it. And if you do opt for the TV NOW service, it’s probably better to get the $80 MAX plan. Primarily because you are getting HBO MAX and Cinemax included. Which is a huge boon. Considering those cost $26 normally, and you’re getting them for only $25 more.

The interface on is pretty good and easy to use, it also works on a ton of different devices. It’s ashame that it doesn’t work on Android TV yet, and that’s mostly down to AT&T being selfish. AT&T has its own Android TV device it uses for AT&T TV – another service it offers, not to be confused with TV NOW. So it wants users to use that, and not something like an NVIDIA SHIELD TV or the Chromecast with Google TV – though it works with Chromecast with Google TV, over Chromecast.

It’s a pretty good value for those that want ViacomCBS channels, as well as their local channels and the option to get HBO MAX and Cinemax included.

You can sign up for AT&T TV NOW by clicking here.