5G is here, and all three carriers in the US offer 5G right now. That includes AT&T, Verizon and T-Mobile. Like with other carriers, AT&T 5G isn’t as simple as faster speeds. There’s a bit more that needs to be explained here. Like their new 5G plans, how much it’s going to cost you, what the heck is 5Ge, and more. So we’ll be aiming to answer all of those questions in this article.

When did AT&T first launch 5G?

With AT&T, 5G is a bit more complicated and confusing than it needs to be. This is because it decided to rebrand its 4G LTE network as 5Ge on a lot of devices. Giving older devices supposedly 5G service, without actually having it connect to a 5G network. It’s confusing, because a lot of the speedtests showed that 5Ge was actually slower than 4G LTE a lot of the times. That was even more confusing since it was the same network.

AT&T has mostly dropped the use of 5Ge, though there are still some older phones that will show it, instead of 4G LTE. This is because Many threatened to sue AT&T over the false advertising. Including Sprint, who is now defunct, as T-Mobile purchased them recently.

The first true launch of 5G on AT&T was in early 2020. But it was not available on many of its plans or in many areas until August of 2020. That was because the company was still building out its network. In August of 2020, AT&T made 5G available nationwide, on its Sub-6 network. The opposite of how Verizon is doing it.

What cities have AT&T 5G? 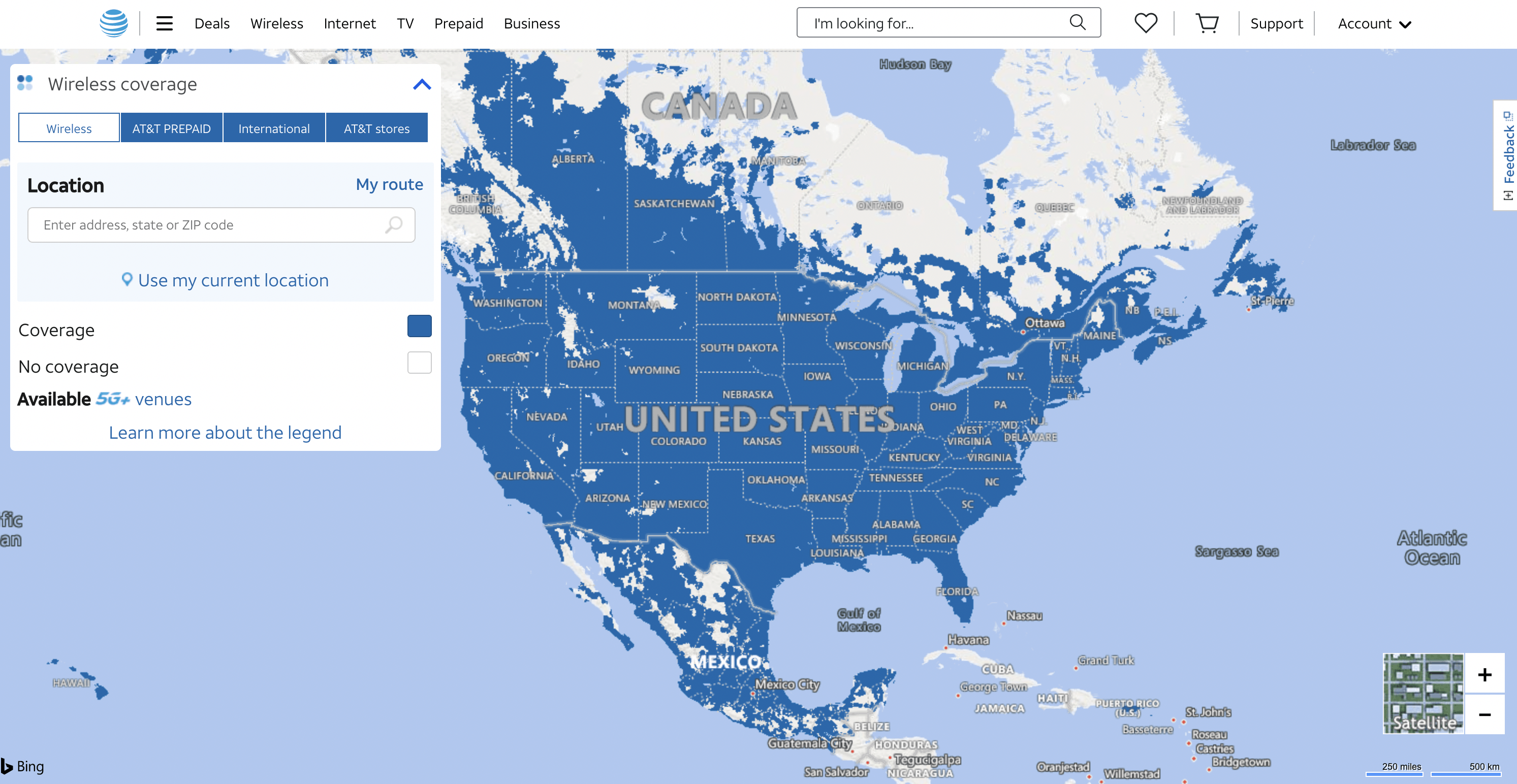 Here’s where AT&T has 5G coverage available as of right now:

AT&T has also brought 5G to a number of arenas and venues, which are listed below. This is where you can really take advantage of 5G, because of the increased capacity and speeds.

Verizon and AT&T both focused heavily on arenas and larger venues for rolling out 5G first. And that is because that is where 5G can really prove itself. With the higher capacity, it’ll work better when there are 100,000 people at AT&T Stadium in Dallas.

Beginning on January 19, 2022, AT&T started rolling out C-Band spectrum for its 5G Network. It’s bundled under the 5G+ branding. So when you see 5G+ it could be mmWave or C-Band.

It has started out by rolling it out in 8 cities:

When will my area get coverage?

This is because AT&T, much like Verizon and even T-Mobile, are building out two 5G networks. There’s the Sub-6 5G network that is running on its 850MHz spectrum. This is basically the coverage portion of 5G. It’s going to roll out to almost everywhere across the nation. But you won’t see dramatically faster speeds.

The general rule of thumb with wireless spectrum is, the lower the band, the more coverage it’ll provide and less capacity (or speed). And the opposite is true for the higher-band spectrum. Which is why most carriers are doing Sub-6 and mmWave. That is AT&T’s second 5G network.

With AT&T’s mmWave network, called 5G+, you’re going to get gigabit speeds. But you won’t be connected to it for very long. At least not at this point. That is because mmWave’s coverage is very weak. I’m sure you’ve heard of the many jokes about Verizon’s network, where a gust of wind can you knock you off of its network. Well that’s because it uses mmWave. Kind of funny that people think mmWave can penetrate the human body and give you cancer though.

mmWave can offer many gigabit speeds on 5G, but the coverage is mere feet. While Sub-6 is measured in miles. Sometimes, hundreds of miles. So there’s a huge difference here.

So the answer here is that, you’ll get 5G soon, but don’t get too excited. As it’ll likely be Sub-6 5G in the immediate future.

Can I use AT&T 5G as my Home Internet?

Technically, yes. But we definitely do not recommend it.

The reason for that is because the 5G coverage you’ll see indoors is basically the same speed as 4G LTE. And hotspotting off of that isn’t all that great.

In the future, we will likely see all of the carriers offering 5G as home internet, transforming them into ISPs. But that is going to be quite a ways off. Since 5G will need to be built out drastically more than it is right now.

What phones work with AT&T 5G?

Almost every phone on AT&T’s website right now, supports 5G. However, many of them do not support mmWave. They support Sub-6 instead. And that is because AT&T was focusing on building out Sub-6 first, before moving to mmWave. So that’s what they wanted their phones to support.

However, any phone released in 2021 or later will support both Sub-6 and mmWave.

Here are a few good options for 5G phones on AT&T. These all support both Sub-6 and mmWave:

There are many more 5G phones available that are unlocked and will work on AT&T’s network too. Make sure that they are certified by AT&T though. Otherwise, they may not connect to AT&T’s 5G network.

What plans work with AT&T 5G?

All of the unlimited plans at AT&T offer 5G connectivity. The majority of them include 5G access, while some of the cheaper plans will charge you extra for 5G access. This isn’t anything new, this also happened with 4G nearly a decade ago. Many carriers, like Sprint, charged you $10 per month to access its 4G network – even if it wasn’t in your area.

There’s the AT&T Unlimited Starter plan. This costs $65 for one line, or if you have a family plan, as little as $30 per month, per line. This plan gives you unlimited talk, text and data, which includes Canada and Mexico. Video streaming is limited to 480p however.

Next is the AT&T Unlimited Extra. This will cost you $75 per month for a single line, or as little as $35 per line on a family plan. You’ll get everything that the Starter Plan has to offer, as well as 50GB of so-called “Premium Data” This basically means you won’t be throttled until you hit that 50GB threshold per month. There’s also 15GB of 5G hotspot data available, per line with this plan.

Then there is Unlimited Elite. This plan will cost you $85 per month for a single line, or $45 on a family plan. In addition to everything on the Starter Plan, you get 100GB of Premium Data, as well as video streaming in 720p quality. Unfortunately, it’s not going to be 1080p or 4K, but 720p isn’t bad either. You also get 30GB of 5G hotspot data, and HBO MAX is included in the price. That’s a $15 value.

On most of AT&T’s non-unlimited plans, you won’t get access to 5G. Which is unfortunate, but it’s better to move up to unlimited anyways. So you won’t have to worry about going over.

Is AT&T using Sub-6 or mmWave?

AT&T is using both Sub-6 and mmWave for it’s 5G network. However it did start out with Sub-6 for its 5G network, unlike Verizon. Verizon decided to start with mmWave so it could showcase the incredible speeds that 5G can provide. But the downside is, coverage is really bad. AT&T decided to prioritize coverage first, and that was probably the right move here.

With Sub-6, you’re going to get some pretty good speeds from AT&T. They should be similar, or maybe a bit faster than its existing 4G LTE network. But you’ll actually get 5G access inside. Which is not the case for mmWave.

AT&T has started to build out its mmWave network, so you will find some markets that have much faster speeds than others. Thanks to mmWave, which is being marketed as 5G+.

In February 2021, AT&T spent $23.4 billion at a spectrum auction to purchase 3.7GHz that will be used in its 5G network. That will serve as a good middle layer for its 5G network. It won’t be quite as fast as mmWave, and won’t have quite the coverage as Sub-6 (even though it is technically Sub-6, but AT&T is using 850MHz for Sub-6). Giving it a ton of capacity that can be added to its network. This is going to be great when everyone starts jumping on its 5G network. As it likely won’t suffer the same issues it currently has on 4G, where it is just entirely too slow. Because of the congestion. But only time will tell.

5G is the next evolution of mobile networks. And while many will say that it is overkill, and that we don’t need gigabit speeds on our smartphones, we actually do.

If you’re old enough to remember, the same thing was said about 4G LTE. Why do we need these speeds when my phone is already fast enough? Now look at it. Those early LTE speeds of around 30-50Mbps are pretty much non-existent. As LTE is now closer to 100Mbps or more.

Our world is changing, and in a few years, 5G is going to feel slow. And yeah, that sounds weird to say, given that we’re seeing 1-2Gbps on 5G on some carriers. But as internet speeds get faster, websites get heavier, apps also get larger, and so do video files. Imagine being able to download a season of a Netflix Original in just a few seconds? 5G is going to allow that, among many other things.

So, today, 5G might seem like overkill. But by 2025, we’ll be back to complaining that it isn’t fast enough. 5G is going to enable us to do virtual reality in real-time, instead of needing to have it downloaded to use offline. It’ll also allow for autonomous vehicles to get information from the cloud. This is thanks to the much lower latency of 5G. And that’s really just the start of what 5G will enable for us.

Is it worth it to upgrade to a 5G phone on AT&T?

Our conclusion on AT&T 5G in early 2021 is that it’s available, but we wouldn’t recommend upgrading your solely so you can use its 5G network. If you need a new phone, its very likely that it’ll be a 5G phone, and in that case, fine. Because you don’t really have much of a choice. But don’t upgrade to a 5G phone just because it has 5G. Upgrade for other reasons.

AT&T’s 5G network is getting pretty good, and covering a large chunk of the US, but it is still not nationwide. Even though AT&T likes to claim that it actually is. That will change in the coming years though. AT&T is working pretty hard at rolling out 5G across the country already, and we expect that to continue for quite some time.