Android 12L is coming. Which might seem like a surprise, since Android 12 just launched a few months ago. But this is a new version of Android that will be released in the Spring of 2022 and will focus on making the OS work better on larger screen devices. That means really foldables and tablets.

That’s very exciting because Google had kind of given up on tablets in previous years. And now it looks like it is taking them seriously again. Android 12L really only takes effect on screens that are over 600DPI. Meaning things like the Galaxy Z Fold 3.

Why is Google releasing Android 12L?

There’s one big reason why Google is releasing Android 12L, and that’s because we love big screens. There are over 250 million active large screen Android devices on the market today. And that’s no small number. So Google is looking to release a version of Android that is going to optimize Android for those devices.

Google has done a tablet-specific OS in the past – remember Android 3 Honeycomb? But it eventually merged into regular Android, and then kind of got killed off. Now, Google is trying again. Android 12L will likely be a one-time thing, we don’t expect to see an Android 13L next year. But at this point, who knows.

Google is actually referring to Android 12L as a “feature drop” and not a full version of Android. Google releases feature drops for Pixel phones about once a quarter already. So this seems pretty accurate. This update is so incremental that it’s not even worthy of a “dot” update – meaning it won’t be Android 12.1.

When will Android 12L be available?

The first developer preview for Android 12L launched in October of 2021. Google expects that the final build will come in the Spring of 2022. But as always with software, that could change and be delayed.

How many betas will there be?

Right now, we expect to see three betas for Android 12L. The first beta came in December, with the second one in January with Final APIs and the third in February as an incremental beta update. And the final release of Android 12L will come in the first quarter of 2022. Likely around March.

As we saw with Android 12, this could get delayed and pushed back a bit further. And we could also see an extra beta or two. However, since this is built on Android 12, with some small changes, it is possible that this may not need many beta releases before the stable release.

What devices will the beta be available for?

Initially, the beta for Android 12L is available on all Pixel devices and the Lenovo Tab P12 Pro Tablet. However, you won’t see any Android 12L specific changes on Pixel devices, since their screens are not large enough.

With the release of Android 12L on March 7, Google announced the Samsung and Microsoft tablets/foldables will get support later this year. That likely means the Surface Duo 2 will get it, but it’s unclear which Samsung devices will get it first, likely the Galaxy Z Fold 3, or it’ll launch with the Galaxy Z Fold 4 in August.

How can I enroll in the beta?

Update: Android 12L has now started to roll out to all Pixel devices, so you do not need to enroll in the beta. As there is no beta now. Though the website is still active, and Android 13 beta should be launching in a couple of months.

If you have the Lenovo Tab P12 Pro tablet, you can enroll in the beta from Lenovo’s website here. If you are a Pixel user, you can sign up for the beta here.

Unlike other Android beta’s, this beta will not be available on other devices, most likely. Especially since this is a pretty quick beta phrase for Android 12L.

What features can we expect in Android 12L?

There’s not really a lot of new features coming in Android 12L, Google is more optimizing the operating system to work better on these larger displays. So you’ll see things like the overview screen, the quick settings and more getting optimized to use that extra space.

The overview screen is getting a revamp with Android 12L. On Android 12, every app in the overview screen card looks the same. But with Android 12L, it’ll be a bit different. Your most recently used app will be the largest, with other apps showing up as smaller cards. Four apps can fill the same space as one big app. Google is also letting them stack, so you can make the best use of this space.

Other than that, it does work the same as it does on Android 12 for smaller devices. However, you do not get the screenshot and select options at the bottom.

If you’ve used a tablet or even a Galaxy Z Fold 3, then you know how weird the Quick Settings can look on a screen that size. It’s just super stretched out, and leaves little room to see notifications, especially if you’re holding it in landscape mode. Android 12L also gets a taskbar that looks very similar to the one in Chrome OS. Which is not a big surprise, since Google develops both operating systems. But this is going to give you more of a desktop-like mode for your foldable or tablet. It’ll make it much easier to switch between apps on your device. 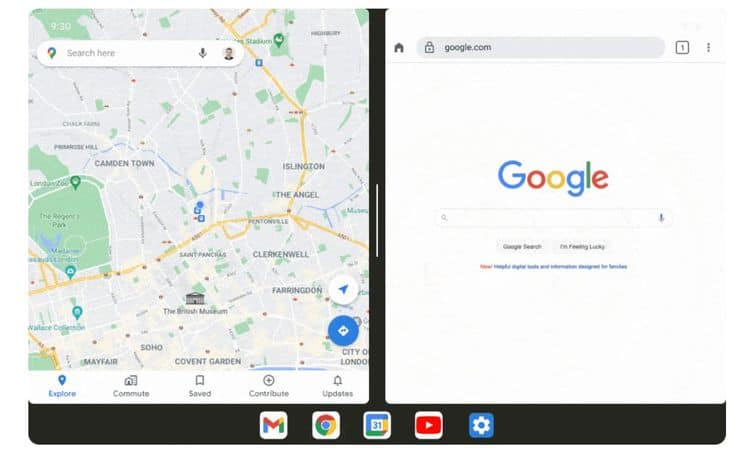 You’ll also be able to resize any app and put it into a multiwindow mode. Of course, this is a feature that came with Android 12, but it’ll also be available in Android 12L.

Along with Android 12L, Google Play will start to highlight apps that are optimized for larger displays. So that users will be able to more easily find apps that they can download for their foldables and tablets.

Google says it is also adding more new checks to assess each apps’ quality against its large screen app quality guidelines, that is to ensure that they surface the best possible apps on those devices.

It will also be introducing large-screen-specific app ratings, as announced in 2021, so that users will be able to rate how your app works on their large screen devices.

Now these changes to the Google Play Store won’t be coming until 2022, but Google is making it easier for developers to get their apps ready for these changes.