Android 12 represents a fundamental shift for Google and the new Privacy Dashboard is one feature that just about every user will want to take advantage of. Although it’s hardly the only Android 12 feature that users should be paying attention to.

With Privacy Dashboard in place, for devices with Android 12, users can access a variety of screens that showcase when apps access data. Including location data, camera data, and mic data, in a timeline. The tool also supports access to Body Sensor, Calendar, Call Logs, Contacts, and Nearby Devices permission readouts. As well as Files and media data permissions and Phone, Physical activity, and SMS access. Albeit, not to the same in-depth extent.

By providing users with the information held within the dashboard, Google hopes to help Android 12 users take control over their privacy. And in a way that’s much more intuitive and helpful than ever before. 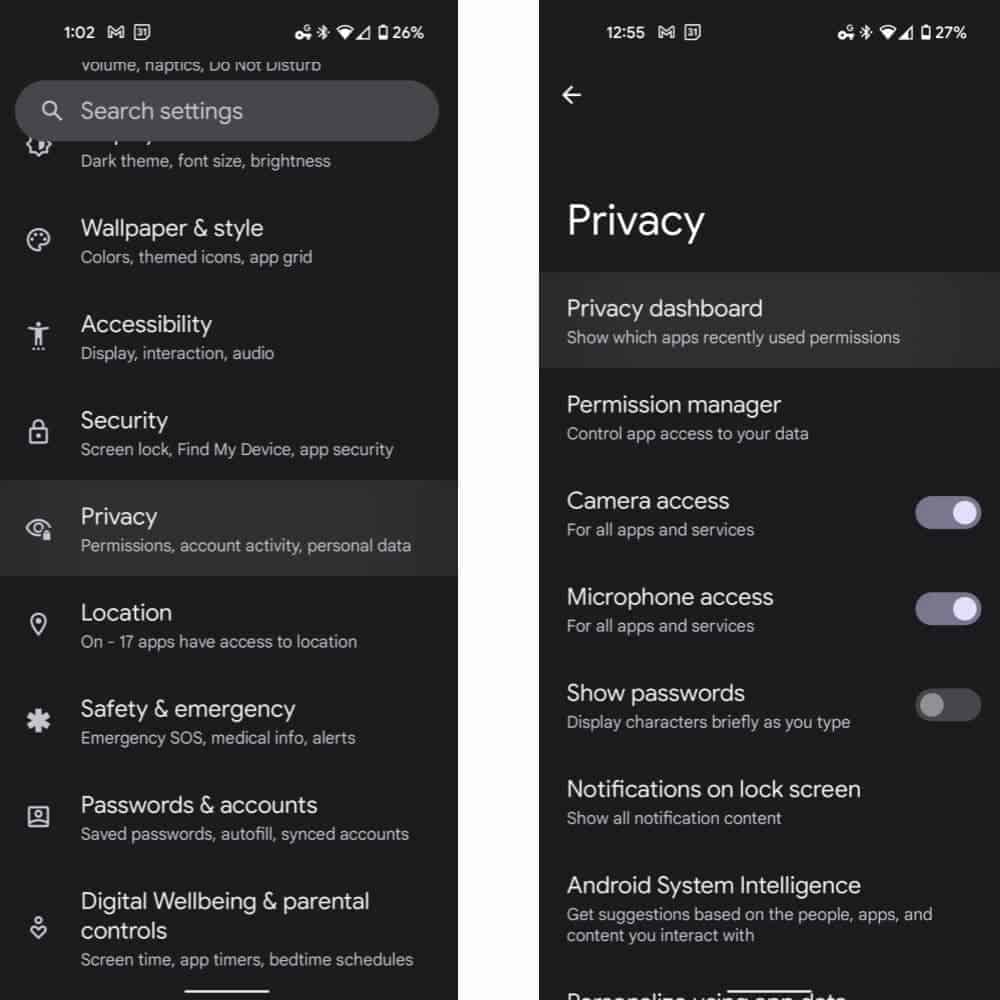 Now, getting to the Privacy Dashboard goes a long way toward revealing how this Android 12 addition is useful. And, fortunately, since it’s part of the base-level system, it’s fairly straightforward. There will be some variance between some gadgets due to OEM overlays and skins. But, summarily, it’s located in a new Privacy subcategory in Settings. Or users can search the Settings app for “Privacy Dashboard.”

For those who need an in-depth walkthrough, you can find that here.

And how do you read the information housed in this dashboard?

Now, understanding what the Privacy Dashboard introduced in Android 12 is, is one thing. Understanding how to make the details useful and utilize that information is another thing altogether. Especially since there is a split between the location data, camera data, and mic data readouts, and all the rest. But that doesn’t mean it needs to be difficult or that only tech enthusiasts will find it useful.

That’s looking well beyond the charts shown separately for Location, Microphone, and Camera access or for the remaining permissions. Both charts provide users with an overview of which permissions are being accessed most frequently. As shown in the images below.

Location, Camera, and Microphone permissions are arguably the most important here

For the above-mentioned readouts, Privacy Dashboard keeps things fairly self-explanatory. Apps that access mics, location, and cameras are arguably bigger potential risks, to begin with. That’s because malicious entities and software can use details stored there for spying. And that holds to the extent that a user’s daily life and habits are revealed. As well as their location data, at any given moment. Potentially putting them in harm’s way or making it easier to implement attacks.

And that holds true not just for physical attacks but also for phishing and other cyber security risks. So Google made it easy for users to not only see what apps access the data but also when.

Opening up the Privacy Dashboard, in fact, the first three segments users should see as options are Location, Camera, and Microphone. And we’ll delve deeper into Location data for this example of how to use the information. Although this will be applicable to all three categories.

With a tap on the “Location” option, users are presented not with a list of apps that have permission to access location data. But with a timeline-style list, showing what time any given app last accessed the data. The usefulness of that information is multifaceted. Not least of all, the tool lets users know if their location is unexpectedly being accessed by an app when it shouldn’t be.

…with one small caveat

That does, of course, come with at least one caveat. Namely, that users will need to be aware that some functions for some smartphones do access data all the time. For instance, Google’s Safety Check will frequently access data to help ensure user safety with regard to accident detection and other functions. So it may not always be clear why any given app is accessing any of these permissions or data. Even when that access is legitimate.

The primary benefit is, then, that the data will give users more insight into what data is being collected. Helping them to stop unnecessary data collection and pinpoint exactly why any given app is accessing the data. And, moreover, the tool empowers users. Specifically, to put a stop to data access if it seems unnecessary or if it’s unwanted. Whether by denying permissions or uninstalling the app.

The same basic premise also applies to camera or mic data. If a random gaming app has, for instance, been accessing the mic, location, or camera, that could be a red flag for that particular app. Now, a tap on any entry in the list of apps shown for Location, Camera, and Microphone permissions reveals even more information. And that information could potentially be even more helpful.

Taking a closer look, for instance, at the Google Fi app doesn’t just show Location access. That permission, for clarity, is set to “Allowed all the time,” as shown in our example images below. And that’s not without good reason. It almost certainly helps Fi to update network settings. Specifically, to the best available carrier towers helping keep the user connected. Similarly, a tap on that permission within the app page shows other settings available.

For instance, users can set the app to “Allow only while using the app,” “Ask every time,” or “Don’t allow. As well as a setting to adjust between precise and less precise location data.

However, tapping on any entry also shows similarly detailed information for other permissions the app is using. So I can see that Google Fi accessed Call Logs in the past 24-hours, as well as the Phone and SMS permissions. Contacts permissions, conversely, are denied. Each of those permissions, directly from this page detailing their use more thoroughly, can be adjusted. That’s via a tap on the permission in question. Conversely, there’s also an option that reads “See other permissions” in Privacy Dashboard.

As might be expected, that expands out the options to include Body Sensors, Calendar, Call Logs, Contacts, Files and Media, Nearby Devices, and Phone permissions. As well as permissions for Physical Activity and SMS.

But none of those permissions gives quite the granular breakdown that Location, Camera, and Microphone permissions do. Or, at the very least, the Privacy Dashboard doesn’t show exactly when permissions were accessed.

Taking a look at the Physical Activity permission in our example device — a Google Pixel 5 — shows that difference. And highlights that the difference isn’t necessarily detrimental to the dashboard’s usefulness. The app will show which apps have accessed the permission within the past 24 hours, for instance.

That means that most users should be able to easily determine if an app is functioning properly. Or, more directly, whether it is or isn’t supposed to be accessing any given set of data.

Moreover, the dashboard shows which apps are allowed to access the permission, to begin with. As well as those that aren’t. And users can also tap on any of those apps to turn permission access off.

Perhaps more importantly, the Privacy Dashboard introduced in Android 12 takes explaining the permissions themselves to a new level. For example, Google describes the Physical Activity permission as having access to physical activity data. For example, the explainer notes, the permission gives access to walking, biking, driving, sleep count, and similar data.

That means that users can access the permissions available in Privacy Dashboard to get a better idea of exactly what each permission gives access to. That, in turn, should help users determine whether or not any given app actually needs permission, to begin with. You can also see which permissions are used by system-level apps, just in case

Now, all of the above information doesn’t just apply to user-installed or pre-installed user-facing software either. In fact, users can see the same readouts for all of the system-level apps and software too. And accomplishing that is a fairly straightforward task. Although, that comes with the caveat of system-level software often requiring access to designated permissions. So attempting to turn those off will likely result in some negative experiences.

Turning on a view of system-level apps couldn’t be any easier either. Simply tap the three-dot icon in the top-right-hand corner of the UI from the Privacy Dashboard home page. Then tap on the “Show system” option. The pages will update to include system-level apps in the mix. As shown in our images below.