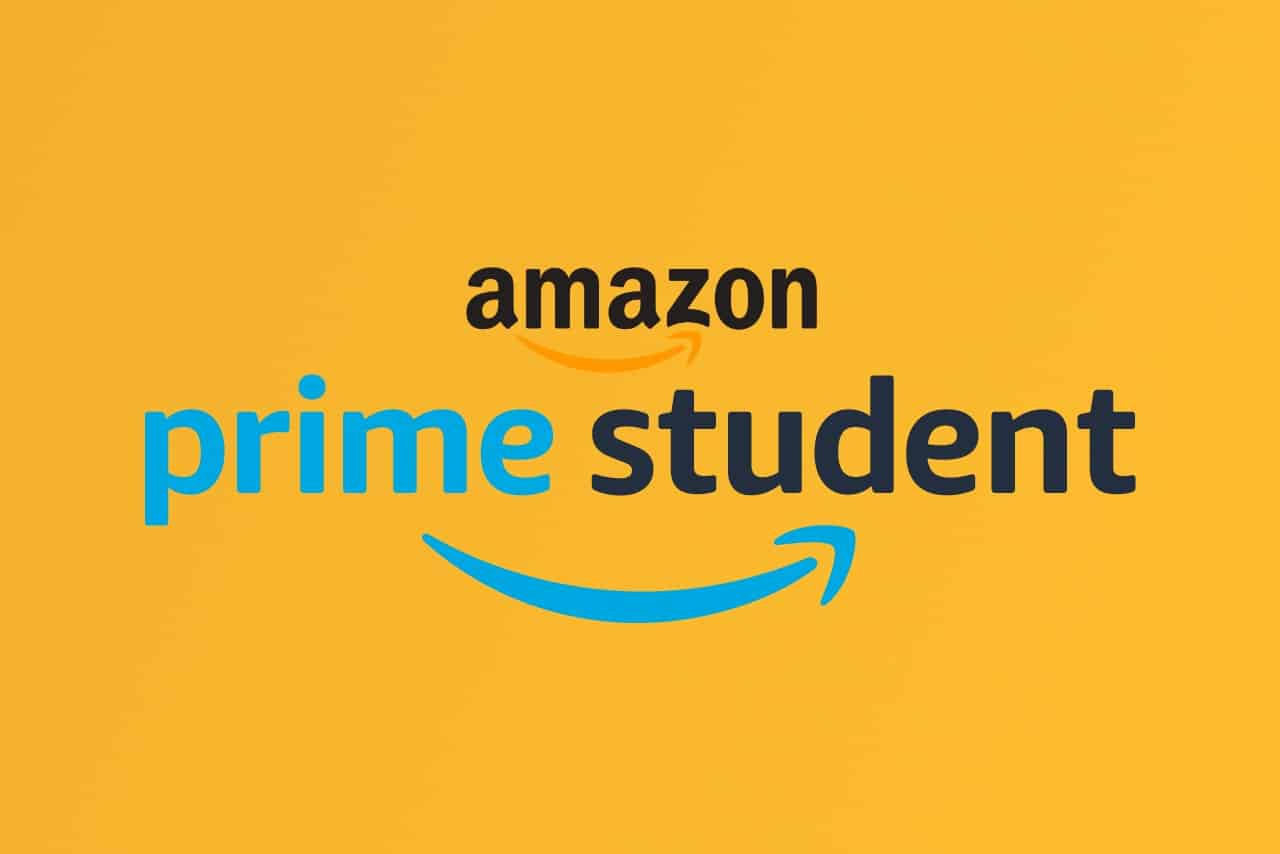 Everyone is pretty familiar with Amazon Prime. As nearly 80% of US households subscribe to it already. But what about Amazon Prime Student? Well, it is essentially a version of Prime that is costs half as much, and has more benefits geared towards college students. It’s honestly the single biggest investment that a student can make before starting college. As the savings that will be made with Amazon Prime Student is pretty incredible.

Today, we’re going to explain all the ins and outs of Amazon Prime Student, and how you can sign up for this subscription service. As well as telling you about all the benefits.

How much is Amazon Prime Student?

Amazon Prime Student costs roughly half the price of regular Amazon Prime. Allowing students to get it for $59 per year, or they can subscribe for $6.49 per month. It is definitely cheaper to pay for it annually, as that works out to about $5 per month. Saving you almost $28 over the monthly rate.

There is also a six month trial available for Amazon Prime Student. That is much longer than the 30 days that Amazon offers free for new Prime members.

You are going to need an .edu email address, and be enrolled in at least one class. Prime Student is only available for you for four years or until graduation – whichever comes first.

For most, the biggest reason to sign up for Prime is going to be the free shipping. It’s even more attractive for students, since Prime Student is half the price. And seeing as Amazon sells just about everything you could want or need, that is a big reason to sign up. But Amazon has added a ton of perks in recent years, making Prime a lot more attractive. Here are some of the perks available for Prime members.

As mentioned, you can get free delivery as soon as the same day. This will depend on where you live, and what product(s) you are trying to purchase. But if you order by noon, it can arrive the same day, which is incredible. And much more convenient than running to your local Walmart.

Almost every thing on Amazon can be delivered within two days. There are some exceptions, particularly things that are not shipped and sold by Amazon.com, but rather shipped by third parties that sell on Amazon’s website.

A really popular service that Amazon has launched in a few cities, is Prime Now. Essentially, you can get stuff delivered to your door within two hours of ordering it. Amazon also offers this service for groceries in certain cities. Surprisingly, this is not available everywhere that has Whole Foods.

The cities that Prime Now is available in, is still pretty small. So you’ll want to check and see if you live in a city that has it or not.

Prime Now is going to be moving into the main Amazon app very soon. So you’ll be able to do all of your shopping from one app.

One of the bigger perks of Prime, is probably Prime Video. Which is Amazon’s own streaming service, and has thousands of hours of movies and TV shows. That are available on your smartphone, tablet, smart TV, gaming consoles and other devices. There are also a ton of exclusive TV shows and movies available on Amazon Prime Video. And it’s available for free with Amazon Prime.

Prime Student members can also add Prime Video Channels for just $0.99 per month for the first year. This includes channels like HBO MAX, Showtime and more.

Amazon also has a streaming music service, which you can sign up for, or get it free with Prime. You can stream Prime Music free, which has a smaller catalog of music available for Prime members, about two million songs. It is also ad-free.

Amazon bought Twitch in 2014, to compete with Google and its YouTube Gaming platform, though only one still exists in 2021. Anyways, Amazon decided to bring twitch into its Prime perks. So with Prime Gaming, gamers are able to get free games and in-game items each month. With Prime Gaming, you can also sign up for one free Twitch premium streamer a month. This allows users to support their favorite Twitch streamers and get access to exclusive features.

With Prime, members are able to borrow a selection of free Kindle ebooks, magazines and much more with their subscription. You will also get a free Kindle book every month from a pre-selected list. Now you may not be getting the New York Times Bestsellers every month, but they are still free books. Prime members can also access a number of podcasts and audiobooks from Audible for free.

Amazon bought whole Foods in 2017, and essentially turned it into a place where you can pick up your Amazon packages, instead of them piling up in front of your home. Prime members can get special discounts at Whole Foods, which regular shoppers won’t get. You can also order groceries from Whole Foods and pick it up within an hour, but you will need to buy at least $35 worth of groceries.

Some locations will do grocery delivery as well.

Perhaps not for everyone, but Amazon does also have a credit card for Prime members. The Amazon Rewards Visa Card will give Prime members up to 5% cash back on purchases from Amazon or at Whole Foods. And you’ll get 2% cash back at drug stores, gas stations and restaurants. And finally up to 1% cash back everywhere else.

Of course, not every Prime member is able to get this credit card. As it will depend on your credit score. But this is one of the better cash back cards out there. Particularly if you shop on Amazon quite often.

Prime members can also get exclusive deals from Alexa. Just ask Alexa “What are your deals” and she’ll list them off. You can then purchase them with your voice, making it super easy to take advantage of these sales.

Amazon also offers early deals for Prime members. Particularly around Prime Day and Black Friday. Amazon is able to make these shopping holidays last closer to a month rather than a day or two. Because of these early deals. And you get early access to Lightning deals. Those deals typically last around six hours (or until stock is out), but Prime members can get access to them 30 minutes early.

So we’ve gone over everything that regular Prime members get. But what do Prime Student members get in addition to those perks? There are a few, but not too many. 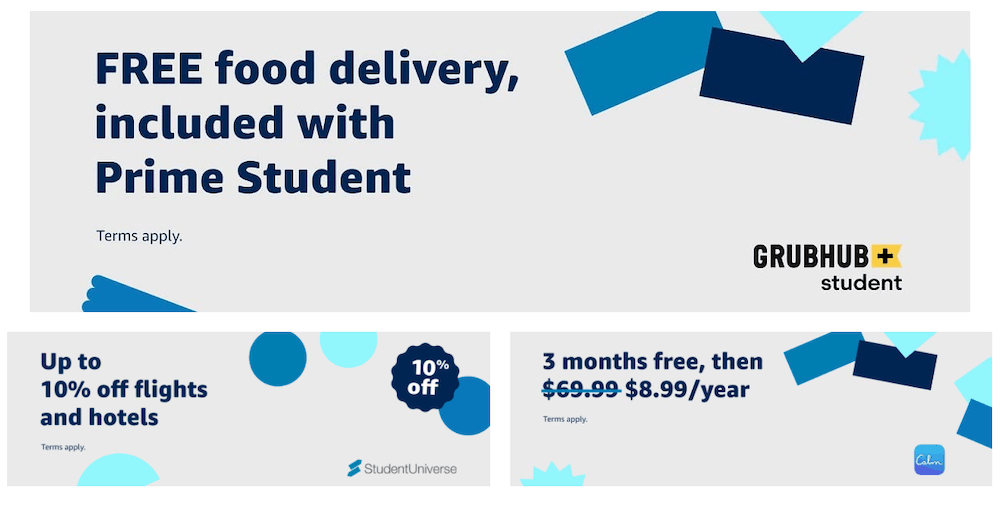 Probably one of the biggest perks is Grubhub. AS a Prime Student member, you will get free monthly Grubhub+ Student membership. Which allows you to earn 10% on Grubhub+ Cash on all off-campus pick-up orders. Which can really add up if you are ordering from Grubhub a lot.

This is really going to be useful for those students that are not living on campus.

Up to 10% off Travel with StudentUniverse

If you’re going to school out of town or even out of state, then this is a really useful perk to have.

Prime Student members can save up to 10% off on already discounted flights. And get 10% back on hotels as an Amazon Gift card after your trip.

Let’s face it, college kids get stressed out pretty often. Whether it’s due to group projects, mid-terms or finals, you’re bound to get stressed out. But Calm is here to help. And Amazon Prime Student members get three months of Calm for free. Then it’s $8.99 per year. That is a huge discount, considering it is normally $69.99 per year.

Is there a catch to Prime Student?

There’s only a couple of catches with Amazon Prime Student. First of all, you cannot share your Prime account with others in your household. Like you can on the regular Prime account. Previously, some perks were not included in the six-month free trial, that is no longer the case. So as soon as you start your trial, you can take advantage of Amazon Music HD, Prime Gaming and more.

Other than that, the biggest catch is that you do need to be enrolled in at least one class, and it only lasts for up to four years. As mentioned before, Prime Student lasts for four years or until you graduate, whichever comes first. Even if you get your Bachelor’s after four years and continue on for your Master’s or other degrees, you won’t be able to keep Prime Student unfortunately.

How can I sign up for Amazon Prime Student?

It’s not quite as simple as signing up for regular Amazon Prime, since they need to check if you are eligible. You will need to either sign up with Amazon or add a secondary email address that is an .edu email address. You’ll be sent an email to that email address to confirm that you are a college student. Or you can email Amazon a scanned document like your transcript or student ID.

Amazon explains the entire process here. In case you have any questions.

Is Amazon Prime Student worth it?

Between the free shipping on almost everything that Amazon sells, as well as great prices on textbooks, Amazon Prime Student is a no-brainer. It also has a ton of great deals on streaming services that you can take advantage of, and as a college student, that is definitely a good deal. 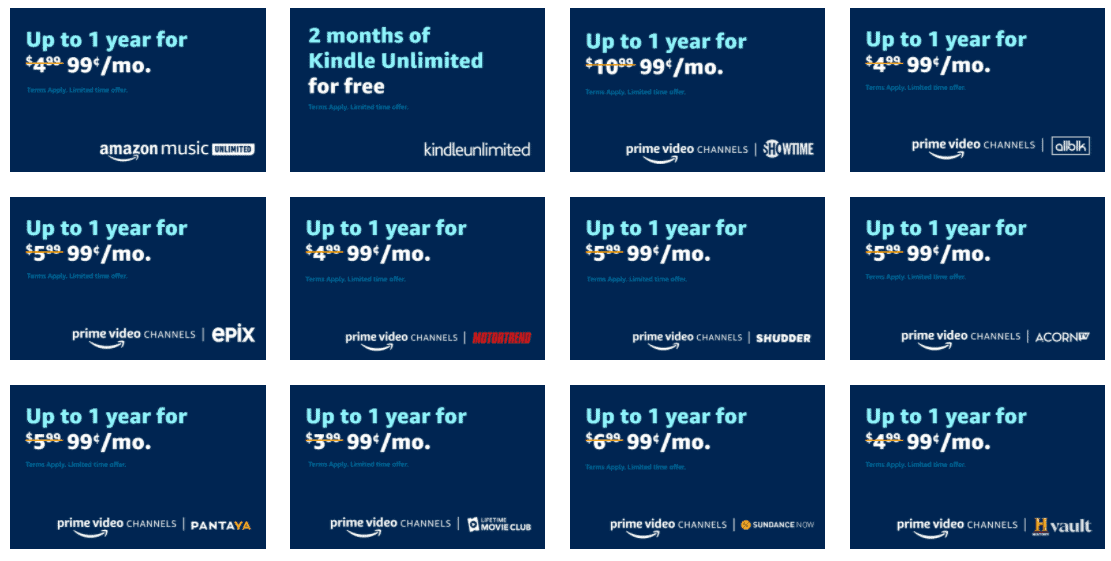 If you’re working on a list of things you need to take to college, make sure you add Amazon Prime Student to that list. And make sure to enroll as soon as you start college, so you can get the full four years of usage out of it.