Amazon’s Fire TV platform has sort of quietly become one of the biggest streaming platforms in the world. It’s currently number two behind only Roku, which has a similar strategy of selling it’s hardware as cheap as possible.

But the real question is what is Fire TV? Is it better than Android TV, Apple TV, Roku and the other platforms out there? How can I get it on my TV? We’re going to answer that and a whole lot more in this edition of “Everything You Need To Know!”

What is Fire TV?

Fire TV is Amazon’s own platform for its streaming set-top boxes. It runs on the same software as its Fire tablets, which is based on Android. Fire TV has all of the big apps that you’d expect, but many Google apps are missing – surprisingly YouTube and YouTube TV are here, but no Google TV or Google Play Movies & TV.

It’s a pretty simple to use platform, which gets updates pretty frequently. And because Amazon gives away Fire TV devices for so cheap (and sometimes for free) all the time, it has become the second most popular streaming platform, behind only Roku.

What is Fire OS?

As mentioned, Fire OS is the software that Amazon develops for Fire TV and its Fire Tablets. It’s loosely based on Android, though a very old version of Android.

As you can see, the latest version of Fire OS is actually about 4 years old at this point, and Amazon doesn’t always use each version of Android. As it skipped Android 6.0 Marshmallow and Android 8 Oreo. But that’s fine, because it is just using the backbone of Android, and none of Google’s services – YouTube and YouTube TV are through a carriage agreement with Google, so it’s a bit different.

When you turn on your Fire TV, you won’t really realize that this is running Android. While it does have a similar look and feel to other TV operating systems, it is still very different.

On Fire OS 7, the interface got a pretty big facelift, which makes it a lot easier to navigate. You’ll start off on the “Home” tab, which will show you different titles that you can watch. Then you can navigate over to Find for searching, and Live for live TV listings. 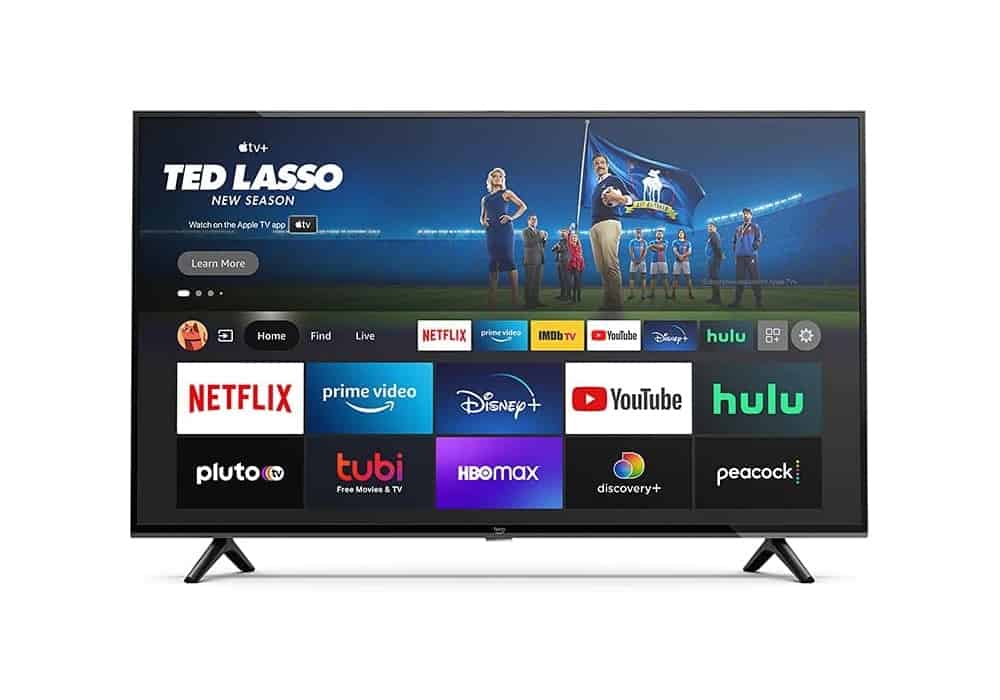 After those three tabs, you have your apps. Amazon only keeps six apps here, so you’ll want to keep your most used apps there, as its easier to get to, than navigating over to the all apps icon on the far right. Fortunately, these are customizable, so you can change them out whenever you want. I usually keep YouTube TV, YouTube, Hulu, Netflix, HBO MAX and Peacock in that row.

All the way to the right is the Settings icon, where you’ll find all of the settings of course. At the very top, you’ll see banners for different movies and TV shows you can watch on different apps. Some of these are ads, while others are just titles that are available to you from apps you’ve installed.

It’s a very simple interface actually, and that’s what matters for Fire TV. As it wants to appeal to everyone, and the Android TV interface is a bit busy. Making it tougher for your parents or even grandparents to use. Fire TV is attempting to copy Roku here, and keeping it super simple. 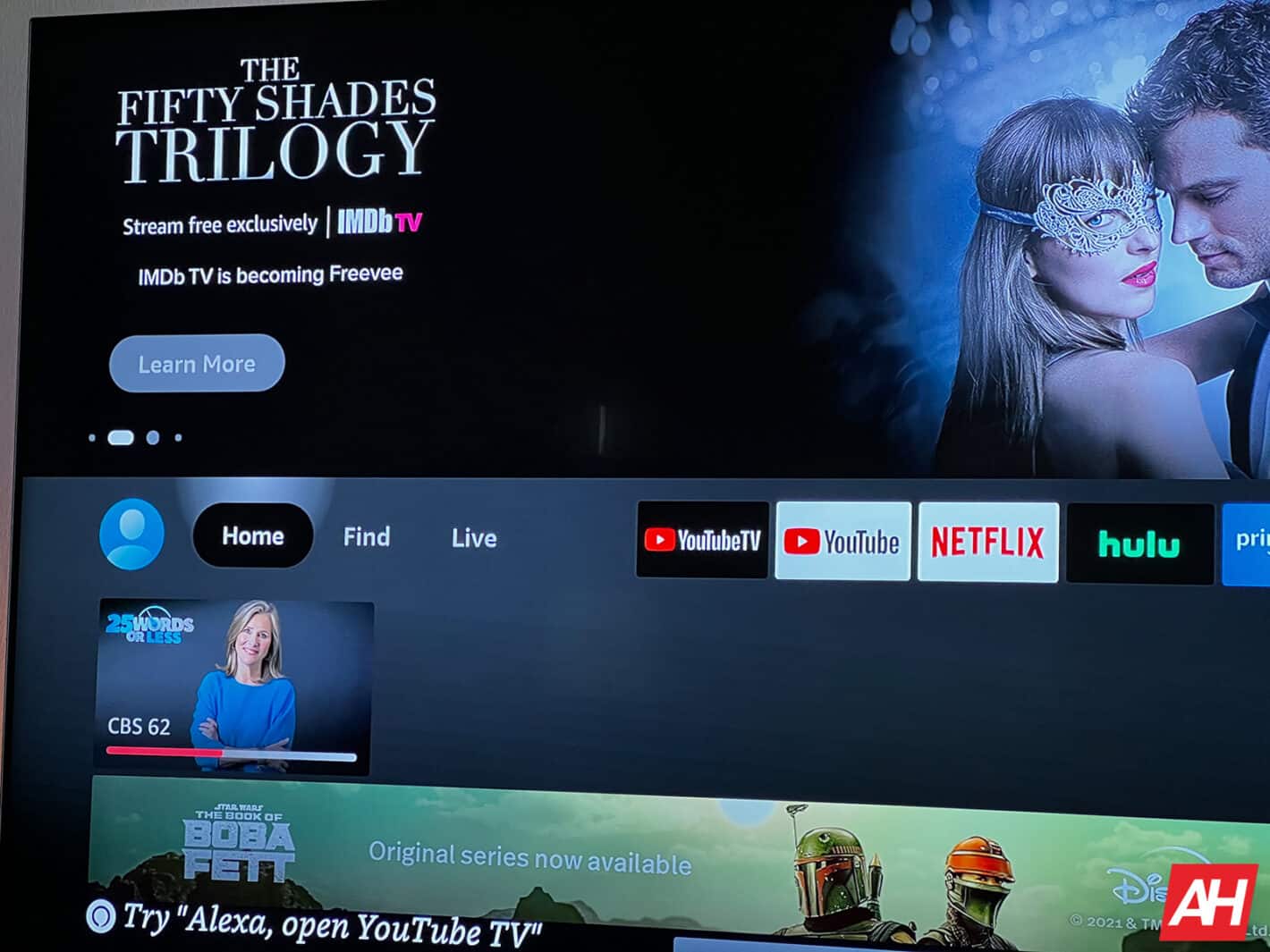 What apps are available?

It’s a fair question to ask, since there are always carriage disputes with different platforms. But Amazon has played nice with everyone and has most of the popular apps available on its platform. These include:

Amazon also has quite a few games on Fire TV, including its own game streaming service Luna. Don’t expect anything crazy here in terms of games on Fire TV, these are mostly easy to play games like Crossy Road and Hill Climb Racing. Nothing really crazy like League of Legends: Wild Rift. Amazon does sell a game controller for Fire TV, but you can also pair your own Bluetooth controller with your Fire TV.

While Amazon does not have its own free channel like Roku, there are plenty of apps that offer up free content and are available on Fire TV. Those include Crackle, Pluto TV, and Tubi. Of course, YouTube is also available, and since you’re probably an Amazon Prime subscriber, Prime Video has loads of content to watch too.

What Fire TV devices are available?

Currently, Amazon has two different types of streaming devices for Fire TV. There are four different HDMI sticks and then a set-top box. Fire TV also comes in many different TVs from Toshiba, Insignia and now Amazon makes its own TVs too.

They are largely the same, except for the fact that the two 4K models are well, 4K capable. The Fire TV Stick 4K Max also more RAM, as well as offering faster WiFi support. These range in price from $30 to $60, so they are still fairly inexpensive. 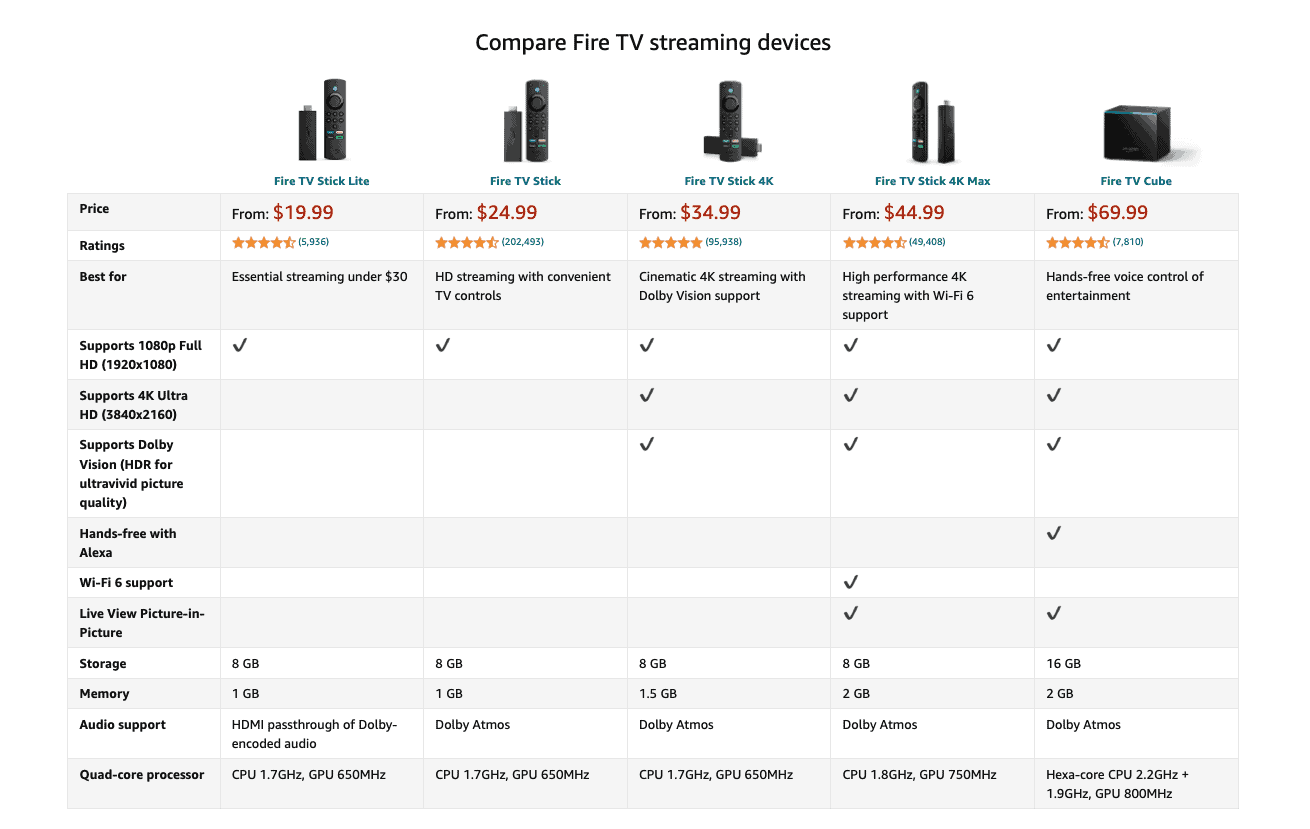 The Amazon Fire TV Cube has actually been around for a few years now, and the main thing that it offers is more storage, and always-listening Alexa. The Fire TV Sticks do not offer Alexa always-listening. Which some people like, since you have to press the microphone button to actually talk to Alexa.

Amazon also has two lines of its own TVs that have Fire TV built-in. The 4 series is the cheaper line, consisting of 43-, 50-, and 55-inch models. These start at under $300. So they are great to put into a secondary or guest bedroom, since they don’t need to be huge. 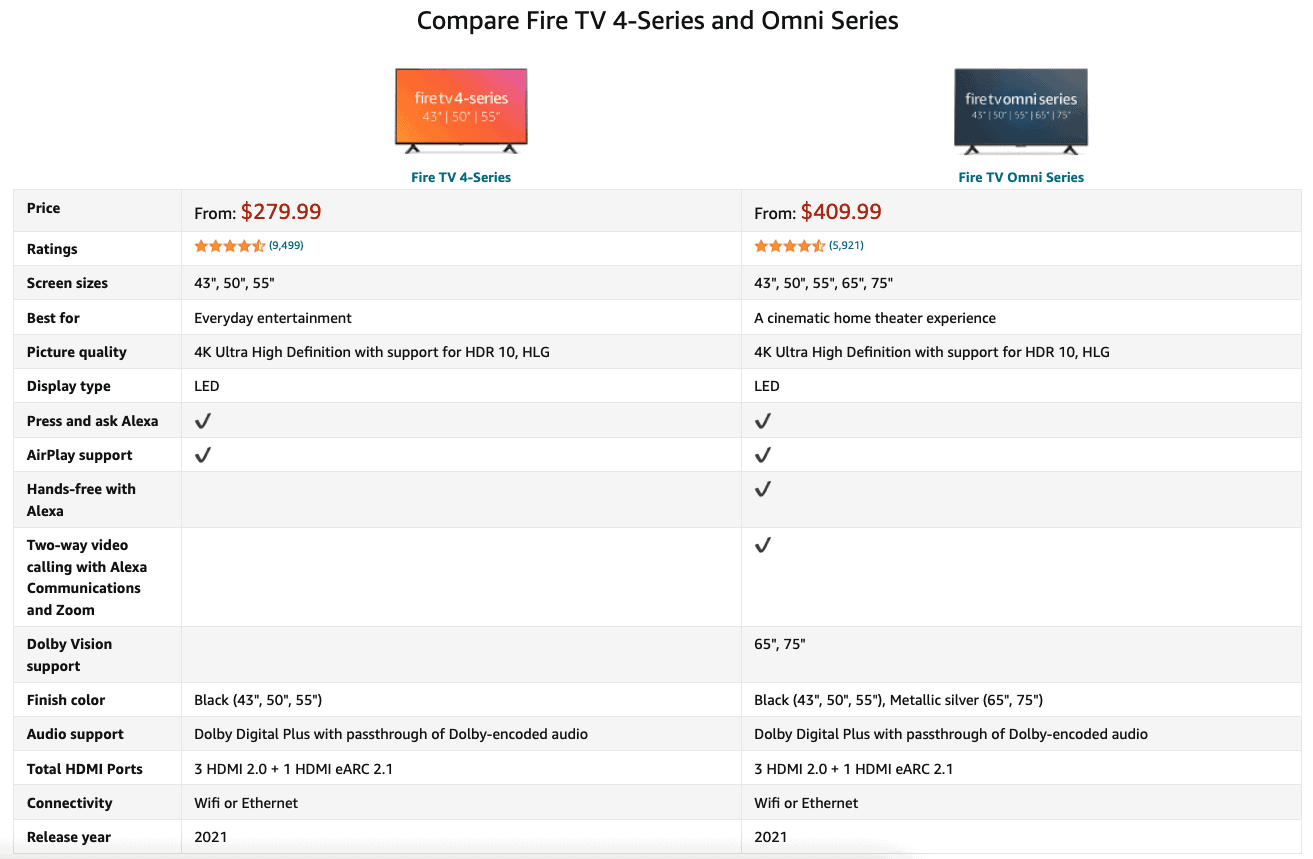 Then there is the Omni series. This is the more premium line of Amazon’s own TV sets, offered in 43-, 50-, 55-, 65- and 75-inch models. These start at just over $400. However they are on sale quite often. The Omni series offers up Dolby Vision but only on the 65- and 75-inch models. It does have a better panel than the 4 series, so you’ll get a better looking picture, regardless. 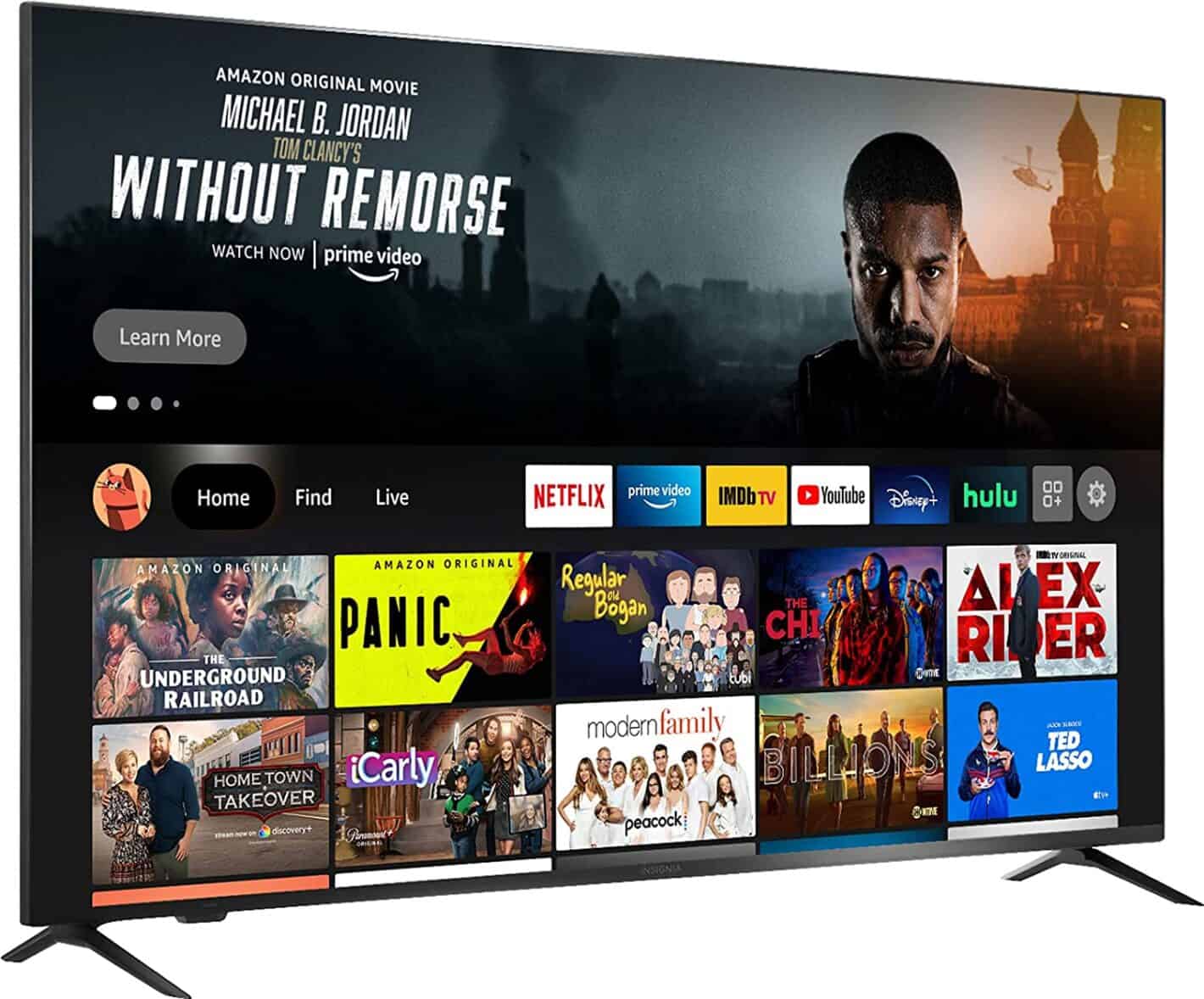 Can I get Fire TV built into my TV?

Yes, you sure can. As we highlighted above, Amazon actually makes its own TVs with Fire TV built-in now. But they weren’t the first to do it. There are a number of other manufacturers that also have Fire TV built-in. Including Toshiba, Insignia, Pioneer.

There aren’t as many options as you have with Roku being built-in, but it is possible here. Which is really nice to see.

Should I use Fire TV?

The first thing to do is, look at the apps and features you use. If all of the apps that you use are available on Fire TV, and you don’t use Google Assistant (or are okay with using Amazon Alexa), then sure, Fire TV is a great alternative. If you do switch, I’d recommend the Fire TV Stick 4K Max. It’s more expensive, but with the extra horsepower and RAM inside, you will thank me later.

Fire TV is quickly becoming one of the most popular streaming TV platforms in the world, and we wouldn’t be surprised to see it take over Roku very soon.