And of course it never will have everything. But there are some features that the game definitely needs. There's also no doubt that the game could stand to use more than new features. It needs plenty of fixes, too. But while CD Projekt Red is working on those fixes to be coming across numerous patches probably throughout this year, new features aren't exactly something that's on the menu.

That however doesn't change the fact that Cyberpunk 2077 would gain some improvement if it had some of these features in place. There's also a few features that the game could stand to lose and it wouldn't be such a big deal. 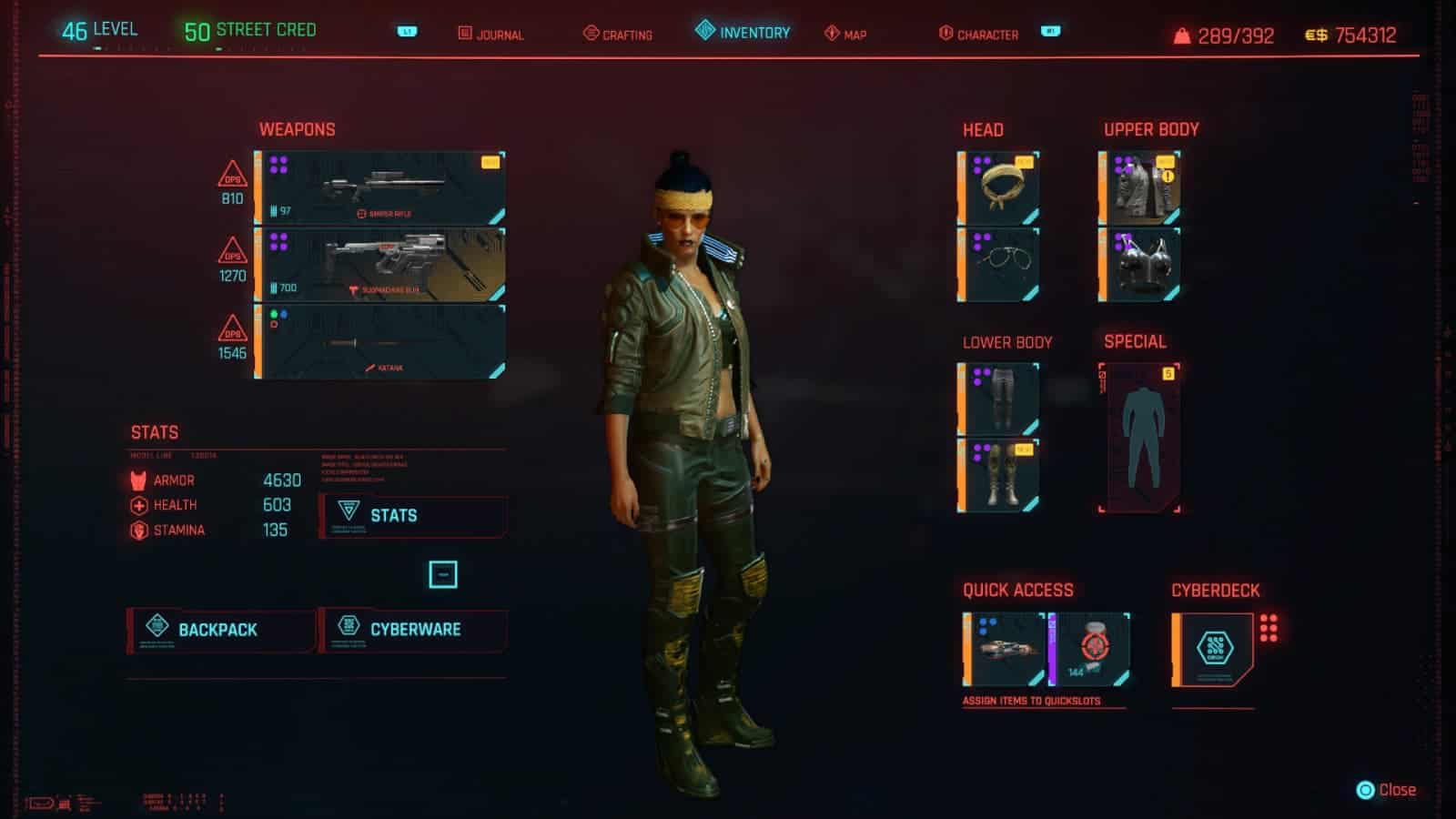 If there's one feature that Cyberpunk 2077 needs and needs badly, it's an item preview option for the clothing within the game. There is a sheer blinding number of different outfit options in Cyberpunk 2077. So many that you could probably spend a decent chunk of time playing around with the different outfits for the sole purpose of creating multiple looks for your character.

The only problem is that you can't see what these clothing items look like before you buy them. Which means you may just spend your hard-earned eddies on a shiny new piece of gear that has great stats, but it looks like literal hot garbage.

Or maybe it just doesn't mesh well with the whole design you're trying to go for. Either way, this has been a point of contention with players since the game's release. It's a small addition that would make a huge impact on the game and give it a big quality of life upgrade.

So here's hoping that CD Projekt Red will choose to add it to the game with a patch or a future DLC drop.

This is likely never going to be added to the game but it is something that Cyberpunk would benefit from quite a bit. We're talking about gear sets and loadouts.

If you're having trouble imagining what exactly we mean here, think of an easy way to swap between all your gear simultaneously to better prepare for situations on the fly. If you've played through the game even part of the way, then you're probably aware of the wide variety of different ways you can play the game.

You can enter most situations guns blazing with SMGs. Or you could stay back and pick people off from afar with snipers. You can become a katana-wielding samurai and slice everything to bits. Or you can use your mega brain and hack your way through the game without ever being seen.

Many things in it are overpowered, from actual weapons to quickhacks. And while you can get through much of or all of the game using the same three weapons for everything so long as you put Armadillo armor mods on all your clothing, some encounters are more fun with specific loadouts.

And sometimes you may just want to wear a different outfit while you play. This is where loadout buttons would come in handy. You could easily save the weapons and clothes you want to specific loadouts like , 1, 2, 3, and 4, and then click a single button to equip everything in those loadouts all at once.

One of the features that could lend itself well to Cyberpunk 2077 actually ties in very well with the last two. A third-person camera view for your character just like CDPR's last game, The Witcher 3.

It seems rather odd that you're can't see your character at all throughout the game's entirety. Save for a few times where you show up during cutscenes, and in the menu where you equip gear. It's especially odd when you consider the sheer number of different looks your character can have in this game.

CD Projekt Red very obviously put a lot of effort into designing the plethora of outfit options you have across all the character types. And with how detailed and complex some of your looks can be, it just seems like a waste not to be able to see that through most of the game's actual gameplay.

An NPC that lets you change your look

Keeping on the theme of all this game's wonderful visual attributes, one of the Cyberpunk 2077 features that would be an excellent inclusion is an NPC that lets you change your look.

Again, Cyberpunk 2077 places a ton of emphasis on your character's design. There's a robust character creator. And a massive list of different clothing items you can acquire and equip. But, let's focus on the character creator.

In real life, people's looks change. So it would make a whole lot of sense for there to be an NPC character in the game that lets you alter the look of your character. It wouldn't even have to allow you to change everything about the look.

But it would be nice to have the option to change things like your hair style and color. As well as add or remove tattoos and other smaller visual elements. This in partnership with the third-person view and an item preview option would make for some great character customization beyond the beginning of the game.

Cyberpunk 2077 is on multiple platforms. And while most people won't own or play the game on more than one platform, some will. I for example own the game on PS5 and on Stadia. But I only play it on PS5 because that's where all my progress is.

It would be great if all of that was shared so I could flip back and forth as it suits me or as situations would call for it. This would have been a great way this past week to continue playing Cyberpunk 2077 while my PS5 was being used by other people. All without having to start a completely new game.

I'll use Assassin's Creed Valhalla here as an example. I have access to the game on Stadia through Ubisoft+. This is where I started playing the game. I then picked it up on PS5 just a couple of days ago because it's currently on sale for $15 off. And when I booted the game up last night for the first time on PS5, all of my progress from Stadia (which wasn't much yet) was saved and I was able to start from where I left off.

This is something Cyberpunk 2077 could really use. And it would no doubt help sell more copies of the game.

Bonus: The ability to craft multiple units of an item at once

Surprise! There's more than 5 features that could be added to Cyberpunk 2077 that would fit well. But we obviously can't list them all or this list would never end. Here's a bonus sixth one though. Because as a player who went all-in on crafting very early on, I feel this on a very personal level.

The game NEEDS to let you craft more than one of the same item at once. No matter the item (except for iconic items), you can craft as many of them as you want. But you have to craft them one at a time. Which is extremely time consuming for things you need in larger quantities like the components you need to craft or upgrade your stuff.

Crafting would be a breeze. And it's definitely something more players should dump skill points into because some of the best weapons in the game come from…. you guessed it. Crafting.

Features that Cyberpunk 2077 could do without 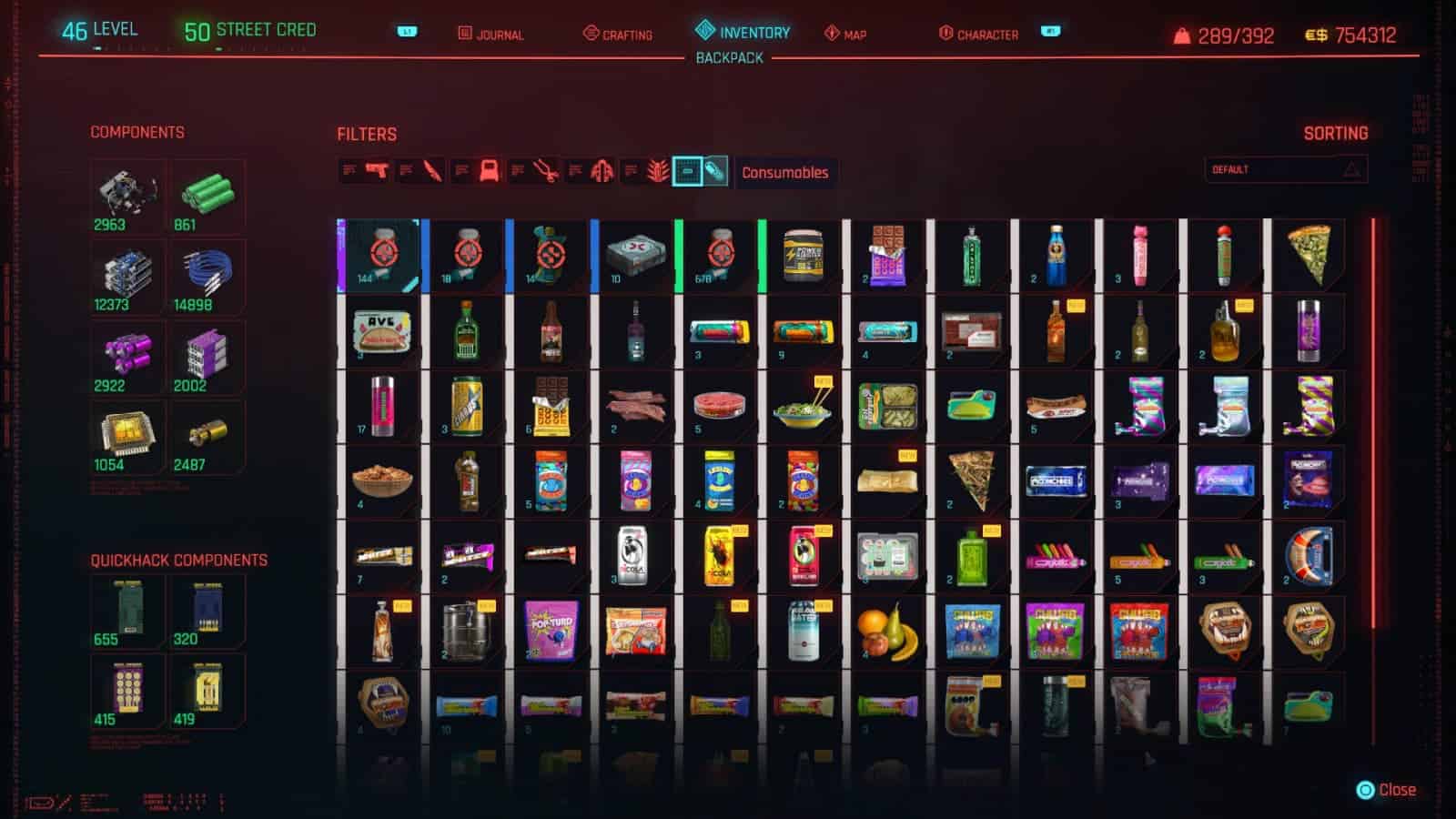 Many of the game's features are wonderful additions. But there is at least one or maybe a few, that could stand to be removed. One in particular is the finite number of monetary resources that vendors and drop boxes have.

You can refresh these resources by skipping time. But if you go on a crafting spree with the plans to sell everything, it can become a little tedious having to skip time just so you can sell more items to the vendor.

If there's anything that should be removed from the game, it's this.

Maybe it's just me, or maybe they really are mostly useless. But the consumables in the game that are supposed to give you buffs seem like a waste.

You can quickly outgrow any consumable that actually has a useful function. Especially later in the game. All you have to do is pay a little bit of attention to your character skills and mods. Any useful stat you might want, can either be increased by the use of mods on your weapons and clothing or through the unlocking of different perks.

These should either be removed as they serve no purpose, or CDPR should alter them to where they're more useful.