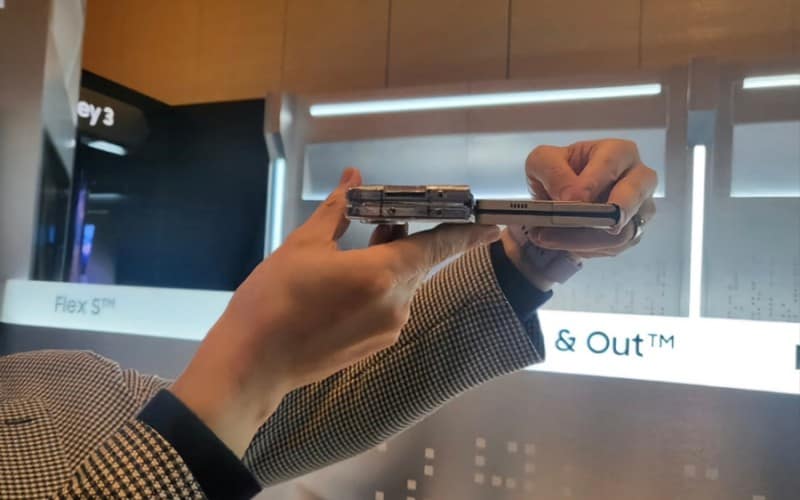 This Galaxy Z Fold 5 prototype is a lot thinner than the Fold 4, and it offers a gapless design

This Galaxy Z Fold 5 prototype is a lot thinner as it includes a different hinge. It relies on a waterdrop hinge that a number of OEMs have been using. That not only makes the phone a lot thinner, but it allows it to fold flat, without a considerable gap in the middle.

Naver does point out that the main reason for the change would be to reduce the phone’s “thickness and weight”, which does make sense. Now, do note that this is not what the Galaxy Z Fold 5 will necessarily look like.

The source did not specifically mention the ‘Galaxy Z Fold 5’ name attached to this prototype. It simply said this is a prototype device. If the latest rumors are to be believed, the Galaxy Z Fold 5 will actually be slightly thicker than the Fold 4, not thinner.

The thing is, that rumor, well, two rumors, didn’t come from the usual sources. Also, a recent report did state that Samsung is planning to use a brand new hinge. So, if the company does change things up, and ends up using a waterdrop hinge, we can expect a narrower profile.

On the flip side, if an S Pen silo gets thrown into the mix, things could change. There’s no way Samsung can fit an S Pen silo in the form factor shown in the image above.

As soon as the first credible leak of the Galaxy Z Fold 5 design appears, we’ll know far more. Regardless, it would be nice to see a major design change with the Galaxy Z Fold 5. At this point in time, it seems like Samsung is trailing the competition in that regard, when it comes to foldables.

The only major advantage Samsung has, design-wise, is water and dust resistance. That’s possibly one of the reasons it stuck with the current design for so long. Neither foldable with a waterdrop hinge offers water and dust resistance. Many people would be willing to give that up for a lighter phone, with a considerably thinner body, and gapless design, though. If Samsung, on top of all that, manages to secure an IP rating as well, that would be a major win for the company.