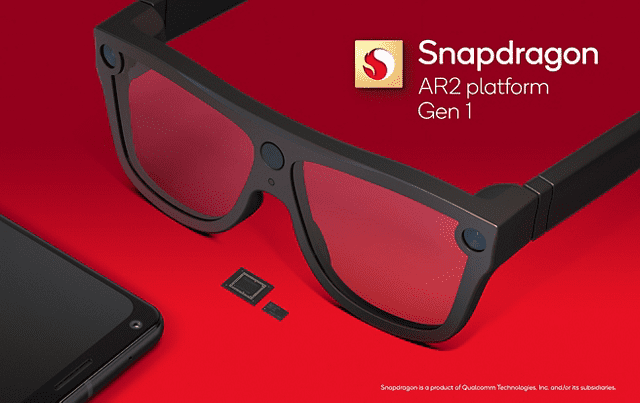 On the first day of Snapdragon Tech Summit, Qualcomm announced its new flagship processor, the Snapdragon 8 Gen 2. On day 2 of the event, the company debuted the Snapdragon AR2 Gen 1, which is the company’s first purpose-built platform for AR headgear. It is targeted at the next generation of sleek and highly capable AR glasses.

With the launch of the Snapdragon AR2 Gen 1, Qualcomm has shifted its focus entirely to AR glasses. While emphasizing boosts in AI performance and power efficiency to support thinner, lighter headset designs.

So,what’s Snapdragon AR2 Gen 1 all about?

The Snapdragon AR2 falls under the company’s extended reality (XR) portfolio, just like the recently announced Snapdragon XR2+ Gen 1. However, Snapdragon claims the AR2 is “purpose-built for AR.” Qualcomm made the AR2 using a multi-chip architecture that includes an AR processor, an AR co-processor and a connectivity platform that connects the AR glasses to a host device like a smartphone. 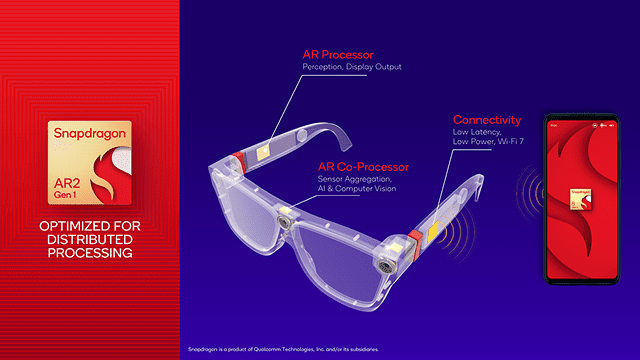 The multi-chip design allows manufacturers to design AR glasses with a balanced weight and slimmer temple widths. Qualcomm claims the new AR2 main processor takes up to 40% smaller area compared to the Wireless AR Smart Viewer Reference Design Qualcomm built using the Snapdragon XR2. While delivering a 2.5x better artificial intelligence performance and consuming half the power. This results in AR glasses that consume less than 1W of power.

The AR processor supports up to nine concurrent cameras for the user and environmental understanding. The processor also includes a dedicated hardware acceleration engine for better motion tracking and an AI accelerator to reduce latency when tracking hands. A reprojection engine which prevents frame dropping for a smoother experience wearing the glasses. 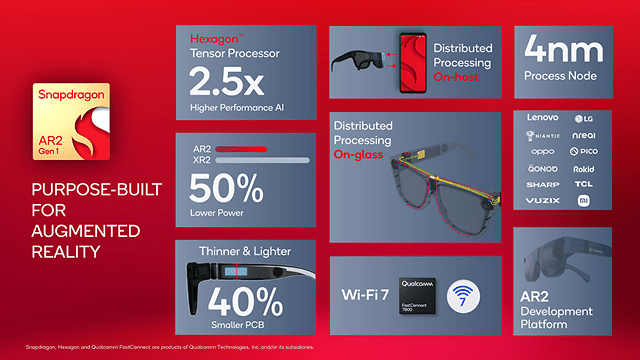 Qualcomm built the co-processor to combine data from the camera and sensors, enabling features like eye tracking and iris authentication for foveated rendering. This will optimize workloads to focus only on where the user is looking, thus reducing power consumption.