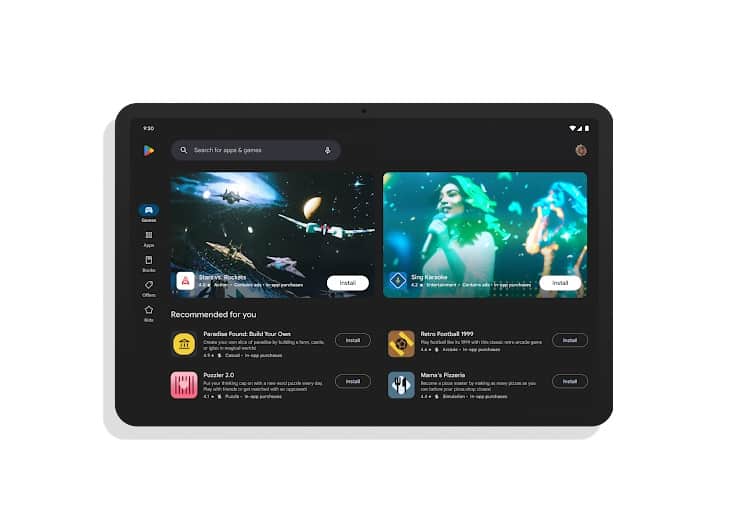 Google is in the process of updating its first-party apps with tablet-friendly UI and other optimizations for improved user experience on big-screen devices. The company announced this commitment to Android tablets at its I/O conference in May. It has already updated several apps with the necessary UI changes. The Play Store also got a redesign on tablets a couple of weeks back, with the navigation rail that Google previewed in May finally showing up for users. But it appears there’s more to come. Starting in 2023, Play Store app listings on tablets will be much richer up front.

A newly published post on the Android Developers Blog details the changes coming to the Play Store on big-screen devices such as tablets, foldables, and Chromebooks next year. Google says app screenshots, videos, and descriptions will be visible on the Apps and Games home page without having to open each app listing (see featured image above). Currently, the home page only shows the app icon, name, rating, and price (if any). To check out screenshots and other app info, you need to open the listing.

Google says this content-forward approach will enable developers to better represent their apps in the store. The company also sees the changes helping users make install decisions. For developers, Google has provided a set of content quality guidelines that they need to follow for their apps to take advantage of the richer format. The new layout will start appearing early next year. The company states that the changes will not impact an app’s profitability. Google is only changing how the app is displayed in the Play Store.

The redesigned Play Store layout on tablets shown in the image above has a Kids tab on the navigation rail (via). The current layout doesn’t have it, with Games, Apps, Books, and Offers as the four tabs. It appears Play Store is gaining a dedicated Kids section too.

Play Store app listings currently only show screenshots for phones and tablets. Since they don’t correctly portray the Chromebook version of the app, Google will allow developers to upload Chromebook-specific screenshots as well. Developers can upload up to eight screenshots which will appear on the app listing page as well as the Play Store home page. The company has also updated its screenshot quality guidelines for big screens, including tablets.

Google’s latest post on the Android Developers Blog also contains other tips for developers to optimize their app listings. The company recommends using device-specific screenshots that demonstrate the core experience of the app. Developers should also avoid showing a physical device in screenshots and use high-quality images with the proper aspect ratio. Using pixelated or compressed images should be avoided, and so should screenshots with too much text.