Skip to content
Advertisement
Trusted By Millions
Independent, Expert Android News You Can Trust, Since 2010
Publishing More Android Than Anyone Else
18
Today
164
This Week
908
This Month
8186
This Year
125672
All Time
Advertisement 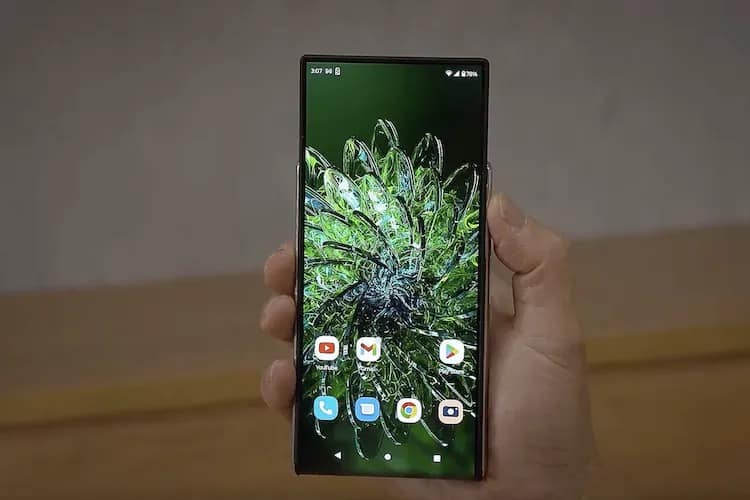 Motorola seems to be working on a rollable smartphone as well. The company has decided to show off its work in progress. If you check out the GIF below, you’ll see Motorola’s rollable phone concept.

Motorola’s rollable phone concept extends its display vertically, unlike others

Unlike pretty much every concept we’ve seen thus far, this one does not roll out horizontally, but vertically. It makes the display taller when it rolls out. The concept OPPO announced a while back, for example, rolls out horizontally, providing us with a small tablet display, pretty much. The same goes for LG’s unreleased rollable smartphone.

Now, if you check out the provided GIF, you’ll notice that the live wallpaper changes as the display extends. The same happens the other way around. That’s a nice touch.

This is not the sharpest GIF out there, so we’re not sure if the display curves or not. There is some reflection, so it’s possible, though at first, it looks like it’s flat. The source says it does wrap around the phone, so we’ll go with that.

The display rolls down to “just over” 4 inches

That display is said to measure 6.5 inches when extended, and it lowers to “just over” 4 inches. The thing is, this GIF does not show us the display when it’s at its start point, but it shows us the process at its halfway point.

That’s basically all the info that we have at this point. This seems to be a working concept, at least to a degree. Don’t expect this phone to see the light of day anytime soon, though.

This may be a great option for a lot of people, though. A 6.5-inch display is quite large, which is great for concept consumption, work, browsing, and so on. When you need the phone to be smaller, though, for one-hand use, you can roll it up and get a very compact phone with a display considerably smaller than 5 inches.

As we’ve mentioned already, this is a considerably different approach to OPPO and LG. Those two companies start with a rather large phone which extends into a small tablet, essentially. It would be nice to see both options in the market.