On Thursday, October 6, Google is having its first in-person Made By Google Event in almost 3 years. The last one was for the Pixel 4 back in 2019. So Google has quite a few things that it will be announcing, and it might even show off a few products that aren’t coming out just yet – like a Pixel Foldable. And that’s because media will be there to actually get hands on with the Foldable, if it is indeed being shown off.

We already have a good idea of what to expect from the Made By Google event  this week, thanks to Google pre-announcing some stuff, confirming some other stuff, and plenty of leaks too. First off, if you head to the Google Store, you’ll see Google confirms a bunch of stuff coming at this event. The page states, “The lineup will include the Pixel 7, Pixel 7 Pro, and the Google Pixel Watch. We’ll also announce additions to the Nest smart home portfolio.” So yeah, lots of stuff is coming.

So here’s what to expect at the Made By Google event this week.

The Google Pixel 7 series will consist of the Pixel 7 and the Pixel 7 Pro, both of which Google pre-announced at Google I/O in May. So we’ve known what the design was going to look like, for months. But we’re still seeing some other tidbits leak out, ahead of October 6. 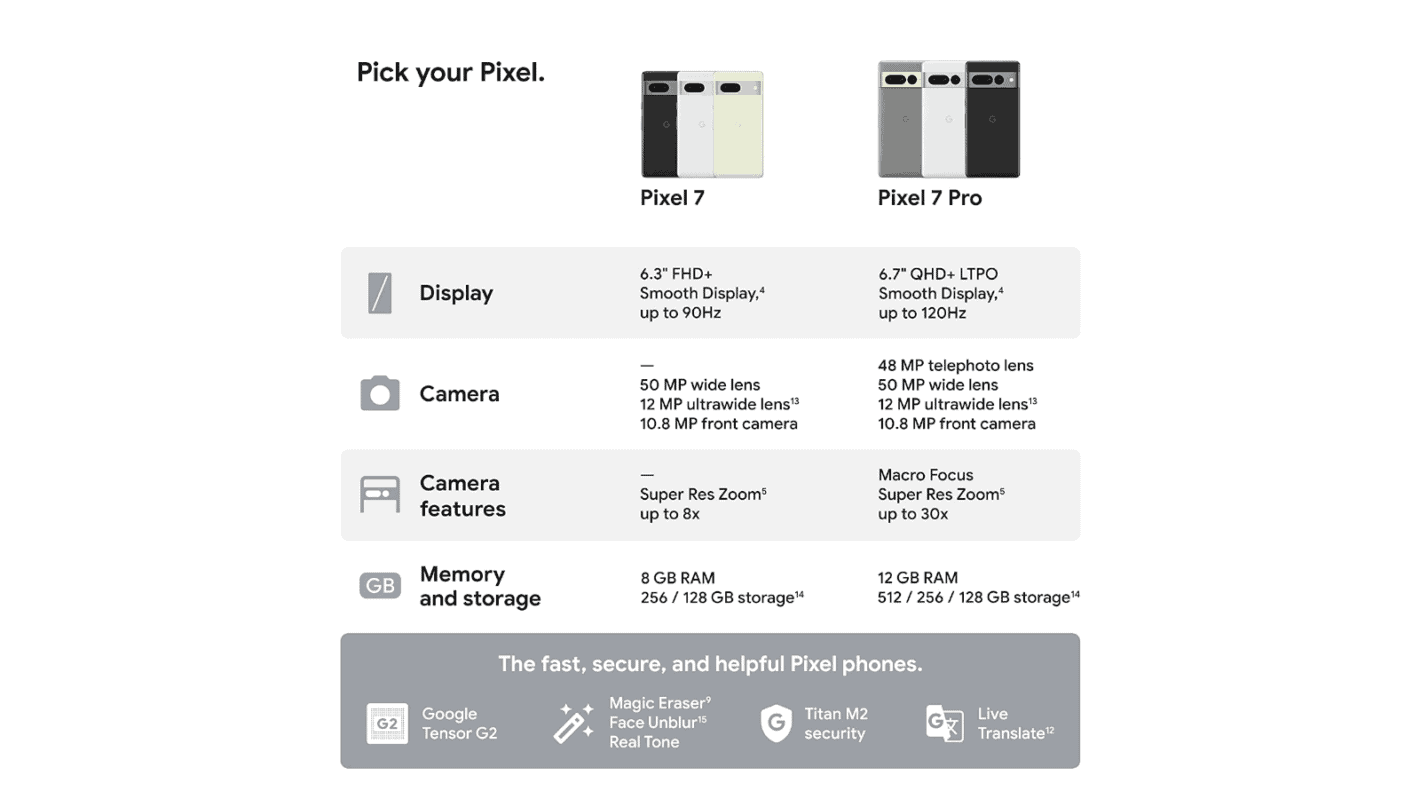 Specs-wise, we aren’t expecting many changes to the Pixel 7 series this year. The Pixel 7 is actually getting a slightly smaller display compared to the Pixel 6. It’s now 6.3-inches, versus 6.4-inches last year. It’s keeping the same 50-megapixel wide sensor, and 12-megapixel ultrawide. While the Pro adds the same 48-megapixel telephoto lens from last year.

There’s 8GB of RAM on the Pixel 7, with the Pro getting 12GB. Both will be available in 128GB and 256GB storage sizes, with a 512GB model also being available for the Pixel 7 Pro.

The Pixel Watch was also announced at Google I/O in May, ahead of this event this week. Google didn’t tell us a lot about the watch, but basically confirmed its existence (after years of leaks and rumors), and also mentioned that it will come with an improved version of Wear OS 3.

From the pictures we’ve seen of the Pixel Watch, it looks like it’s going to have some pretty big bezels here. Pretty similar to the Pebble Time from all those years ago. Which sounds less surprising than you might think. Fitbit bought Pebble, and Google bought Fitbit. So it could be the Pebble team working on this watch.

Inside, we are expecting to see the Exynos 9110 processor inside, with at least 1.5GB of RAM and up to 32GB of storage. Making this a pretty powerful device on your wrist. Leaks also point to it being about 40mm on the watchface, and about 14mm thick. 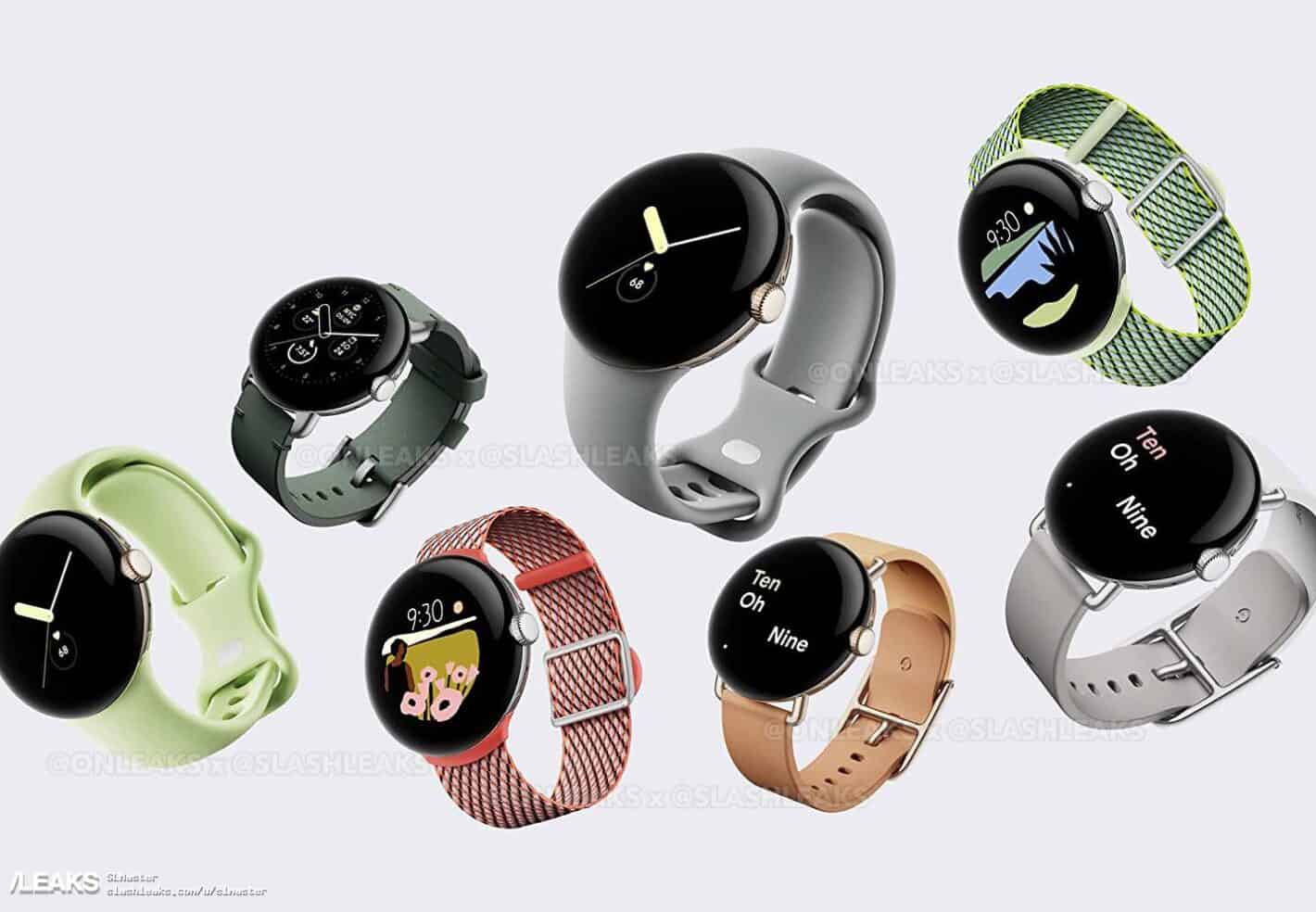 Leaks have shown us that the Pixel Watch will also come with a slew of different bands, as you can see above. So there should be plenty of options for everyone. Pricing is said to start at $349. And it’ll be available in black, silver and gold.

We’re expecting a few Nest smart home devices, and that’s really it. These are likely going to be pretty minor upgrades, to be honest. But first, we are expecting to see a new Nest Video Doorbell. We don’t know much about this, other than some renders that have surfaced in recent weeks. It could be a cheaper model, since the doorbell was announced just last year. So it could be like the Nest Learning Thermostat and the Nest Thermostat E.

Then there’s the Nest WiFi Pro, which has been listed on B&H Photo for $199. There is also a listing that has come through the FCC recently, showing that it would support WiFi 6E and Bluetooth LE. It would also likely support the Matter smart home standard that it and many other big tech companies are working on.

We could also see a few other small products from Nest, since it hasn’t really announced anything major in a few years now. But we’re all for surprises.

This category is items that we could see at the Made by Google Event, but is more unlikely to happen. That includes the Google Pixel Tablet and a foldable.

Now the tablet itself was announced at Google I/O too, but Google stated that it wouldn’t be coming until next year. We know what it looks like, at least partially, so it won’t be a big surprise. But Google may announce more about this tablet and even have it on display for the media to take photos of at the event.

Then there’s the Pixel Foldable. For a few years now, we’ve been seeing rumors and leaks about a foldable Pixel device. It’s unlikely that it would go up for pre-order this week. But we could see it teased at the event. This is the type of device that Google would want to announce well ahead of it being available. As developers are going to need to be able to make some new apps for the device. To take advantage of the multiple screens and larger screens.

As mentioned, both of these likely won’t be announced this year, they are more likely to come in the Spring. But there is a chance that we learn more about both of these.