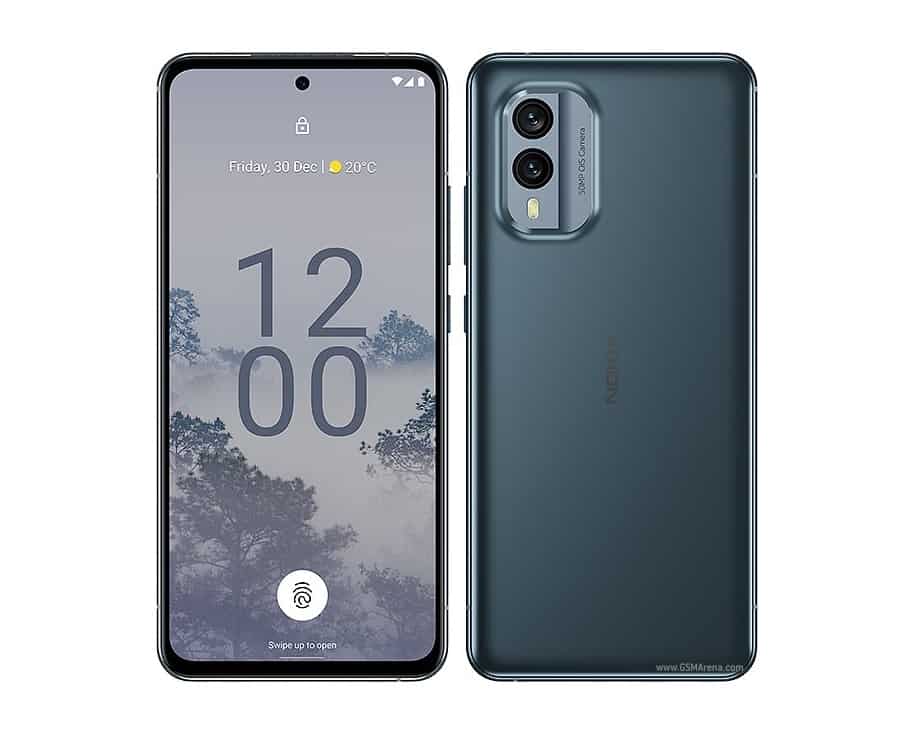 Nokia launched a flurry of new products at IFA 2022. The Finnish brand debuted three budget and mid-range smartphones, a tablet, a pair of TWS earbuds, and a portable wireless speaker. Firstly, we have the X30 5G, a premium mid-range 5G smartphone powered by Qualcomm’s Snapdragon 695 processor, disappointingly. It isn’t the best chipset for a phone costing more than $500. The company has paired the chipset with up to 8GB of RAM and 256GB of UFS 2.2 storage.

This phone features a 5.43-inch AMOLED display with FHD+ resolution, a 90Hz refresh rate, and 700 nits of peak brightness. This is the first Nokia phone to feature an AMOLED display since the Nokia 9 PureView in early 2019. The display has Gorilla Glass Victus protection but the rear panel is made of plastic. The frame is made of 100% recycled aluminum, though. The rear camera also has Gorilla Glass DX+ protection.

Speaking of cameras, the Nokia X30 5G has a 50MP primary camera on the back. It supports 4-in-1 binning and OIS (Optical Image Stabilization). A 13MP ultrawide lens accompanies it, offering a 123-degree field-of-view, 1/3.06”). The selfie camera inside the tiny punch-hole on the display is a 16MP unit and it also supports 4-in-1 binning.

The Nokia X30 5G debuts with Android 12 and will get updates until Android 15. To go with three generations of Android upgrades, Nokia is also offering three years of security updates and an extended three-year warranty. It is fueled by a 4,200mAh battery that charges at 33W speed.

Other key features include an under-display fingerprint scanner, face unlocking, sub-6GHz 5G connectivity, dual nano-SIMs, eSIM, Bluetooth 5.1, Wi-Fi 6, NFC, an IR blaster, and an IP67 rating for dust and water resistance. The Nokia X30 5G comes in Cloudy Blue and Ice White colorways and is available globally starting today with a price tag of €530 ($530) for the base model. 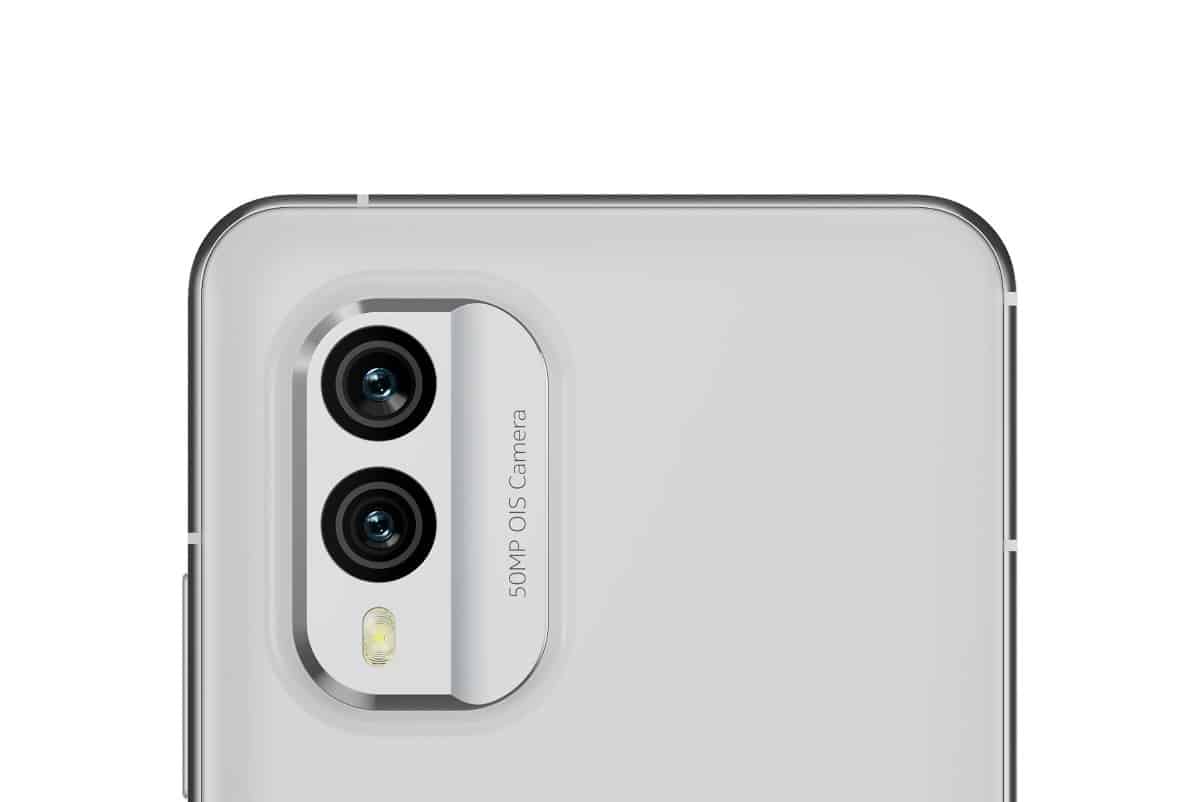 For budget-conscious people, Nokia has the C60 5G at almost half the price of the X30 5G. This mid-range 5G smartphone is also powered by the Snapdragon 695 chipset, which is nice to see. The company is only offering 6GB of RAM and 128GB of storage at max, but you have a micro SD slot should you need more storage space.

Nokia reverted to an LCD screen for this model, but it’s a bigger panel measuring 6.58-inch diagonally. While screen resolution is unchanged, you now get a 120Hz refresh rate. So, this phone should feel smoother to navigate around. The company has reduced the peak brightness to just 500 nits, though. Nokia also downgraded to older Gorilla Glass 5 protection.

The display has notably wider bezels and a V-shaped notch, something we see more on low-cost phones. The whole body is made of plastic, including the frame. But Nokia is promising the same “3-3-3” support here as well. So, the Nokia G60 5G will get three Android OS updates (until Android 13), three years of security updates, and a three-year warranty.

For photography, the Nokia G60 5G boasts the same 50MP camera but without OIS. It downgrades to a 5MP ultrawide lens but adds a depth sensor on the back. The selfie camera is an 8MP unit. The device packs a 4,500mAh battery and tops out at 20W fast charging. Other highlights include a hybrid tray (two nano-SIMs or a SIM+microSD card), eSIM, Bluetooth 5.1, Wi-Fi 6, NFC, and an IP52 rating for dust and water resistance. This phone is also available in stores today starting at €320 ($320). 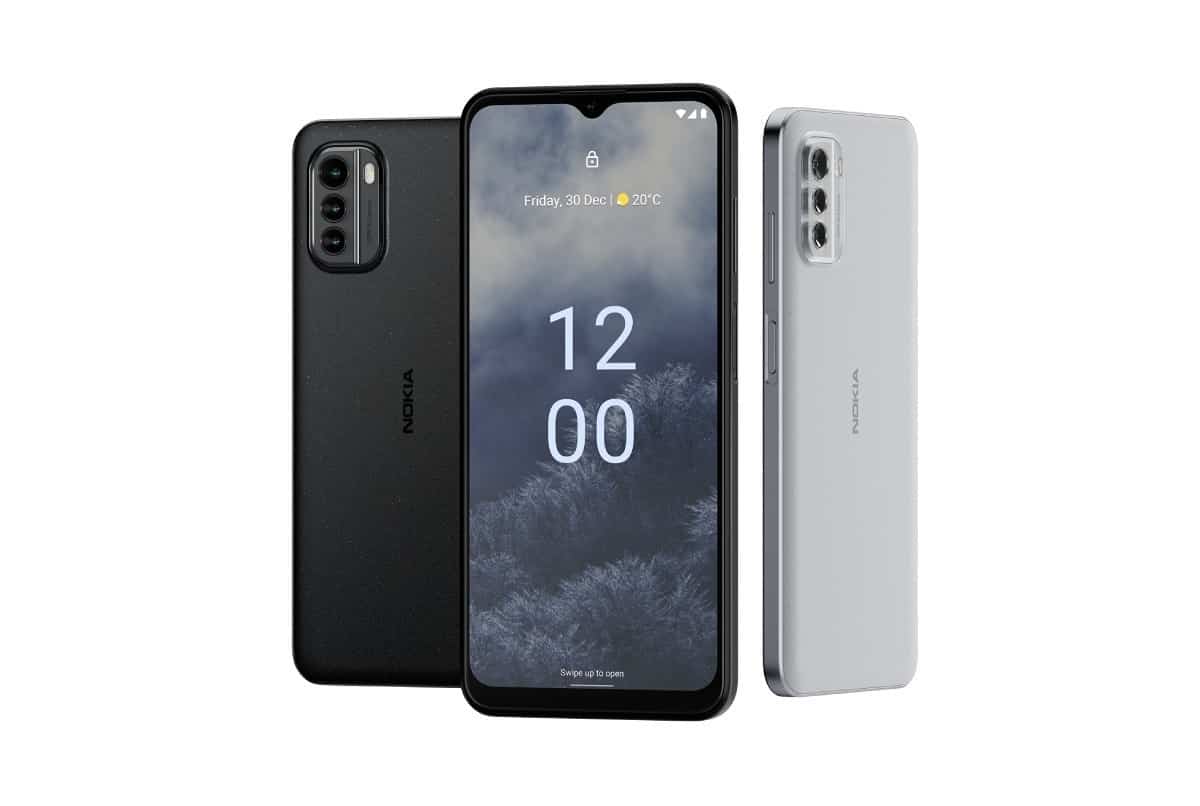 The Nokia C31 is for those who don’t need 5G

If you don’t need 5G connectivity, Nokia has the C31 mid-ranger featuring an even bigger 6.75-inch display. It’s an LCD panel with HD+ resolution and covered by an unnamed toughened glass. Under the hood is an Unisoc 9863A1 processor with up to 4GB of RAM and 128GB of storage. There’s a dedicated microSD card slot that enables up to 256GB of added storage space.

The Nokia C31 boasts a 13MP main camera, 2MP macro camera, and 2MP depth sensor. The U-shaped notch on the display houses a 5MP selfie camera. A 5,050mAh battery fuels this phone, but you only get a 10W charging speed. It also keeps the older micro-USB port.

Otherwise, the phone boasts a dual nano-SIM slot, a 3.5mm headphone jack, an FM radio receiver, Wi-Fi b/g/n, Bluetooth 4.2, and an IP52 rating for dust and water resistance. The Nokia C31 boots Android 12 from day one and will get updates for two years. The handset comes in Charcoal, Cyan, and Mint colors and is available today for a base price of €240 ($240). 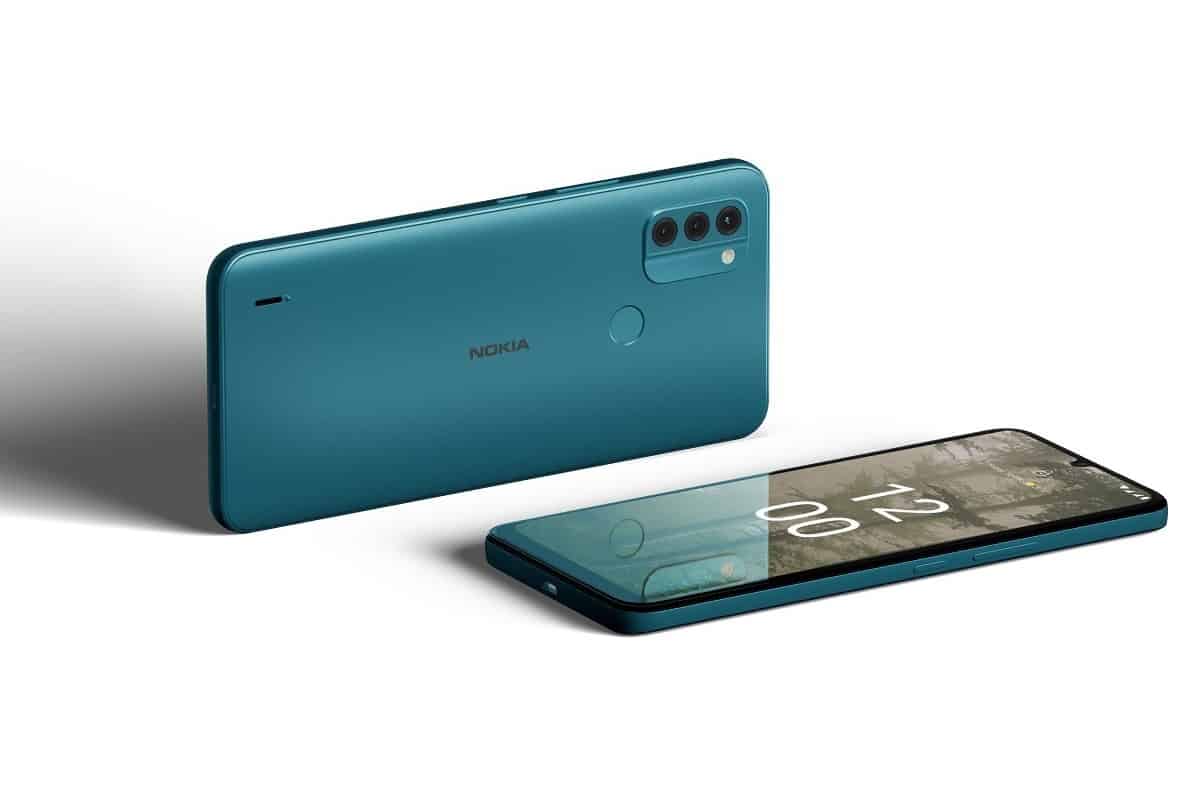 Nokia also launched a tablet, a pair of TWS earbuds, and a wireless speaker

Nokia today also launched the Nokia T21 Android tablet. It sports a 10.4-inch LCD screen with 2,000 x 1,200 pixels resolution. Unisoc’s T612 chipset powers the device with Nokia offering 4GB of RAM and up to 128GB of storage. It features two 8MP cameras, one each on the front and back. The tablet supports 4G connectivity (optional) and boasts a hybrid slot where you can put two nano-SIMs or SIM and a microSD card of up to 512GB capacity.

The Nokia T21 runs Android 12 out of the box. The company is promising two major Android OS updates (until Android 14) and three years of monthly security updates for the tablet. The package also includes an 8,200mAh battery with 18W charging over USB Type-C, a 3.5mm headphone jack, and an IP52 rating for dust and water resistance. The tablet comes with Netflix HD certification, so it’s good for media consumption.

The Nokia T21 tablet is priced at €130 ($130) for the Wi-Fi-only model with 4GB of RAM and 64GB of storage. Pricing details of other variants are unknown. It is launching today. 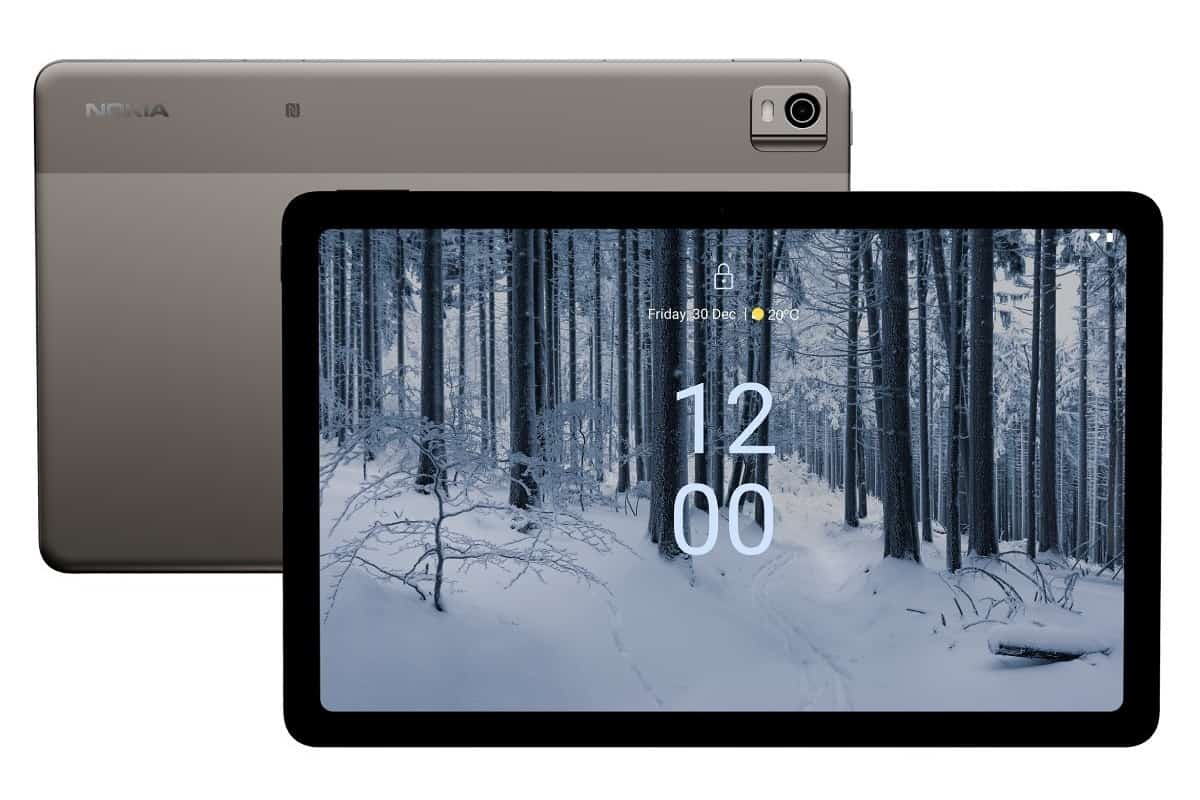 Nokia also has a pair of new TWS earbuds dubbed the Nokia Clarity Earbuds 2 Pro. They offer hybrid Active Noise Cancellation (ANC) and up to 36 hours of battery life. The earbuds pack 13mm neodymium drivers and are good to use in slight drizzle thanks to an IPX4 rating. You also get Fast pair support and Bluetooth 5.2 with multipoint connectivity. The buds cost €100 ($100) and will be available in select markets later this month.

If you want a portable wireless speaker, Nokia has got you covered there too. The company is launching an affordable speaker measuring 90 x 90 x 74mm in dimension and weighing 225g. It packs a single 5W driver (45mm) and offers 22 hours of continuous playback. This speaker comes with Bluetooth 5.1 for connectivity and boasts an IPX7 rating. Nokia has priced it at €55 ($55). 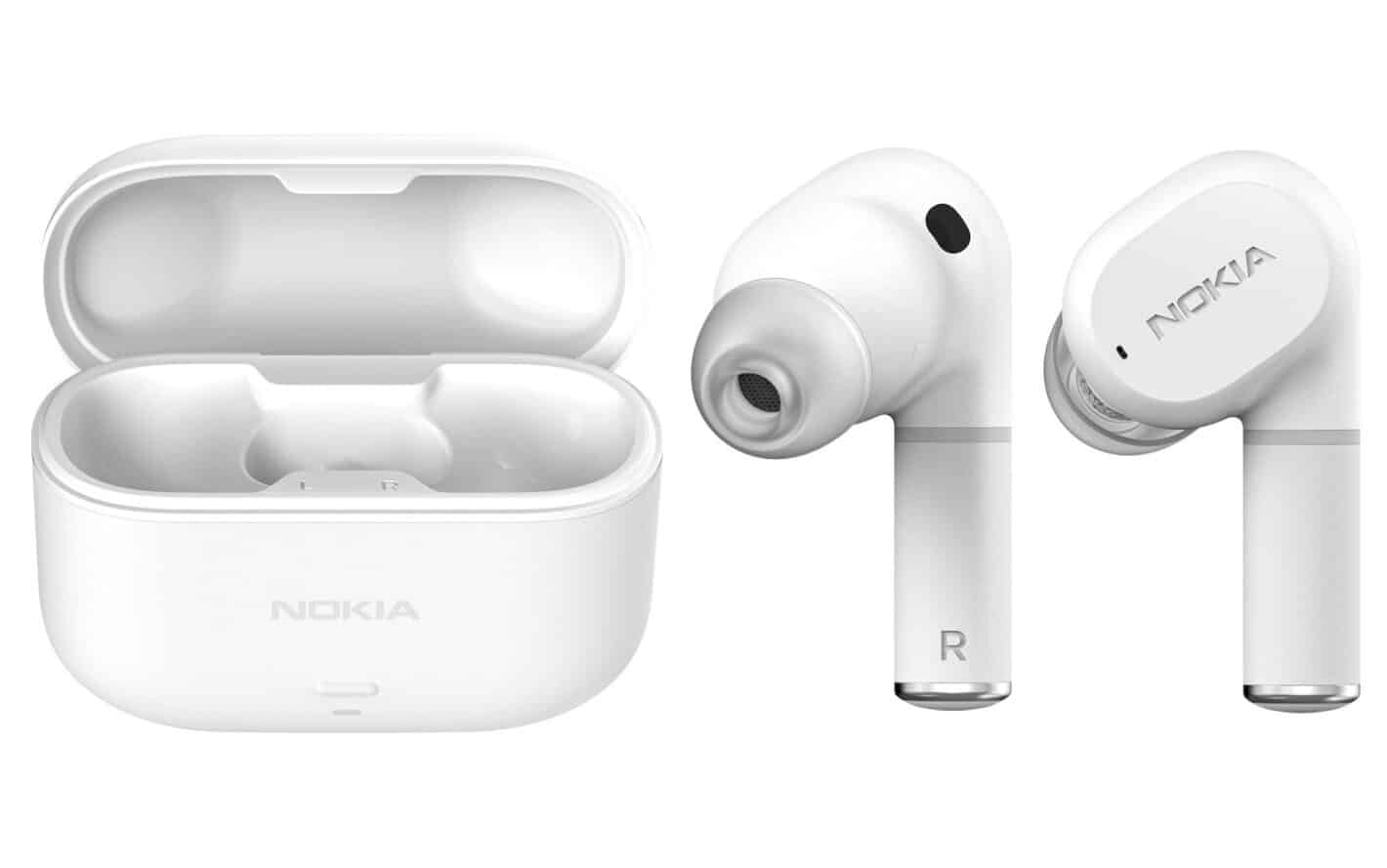 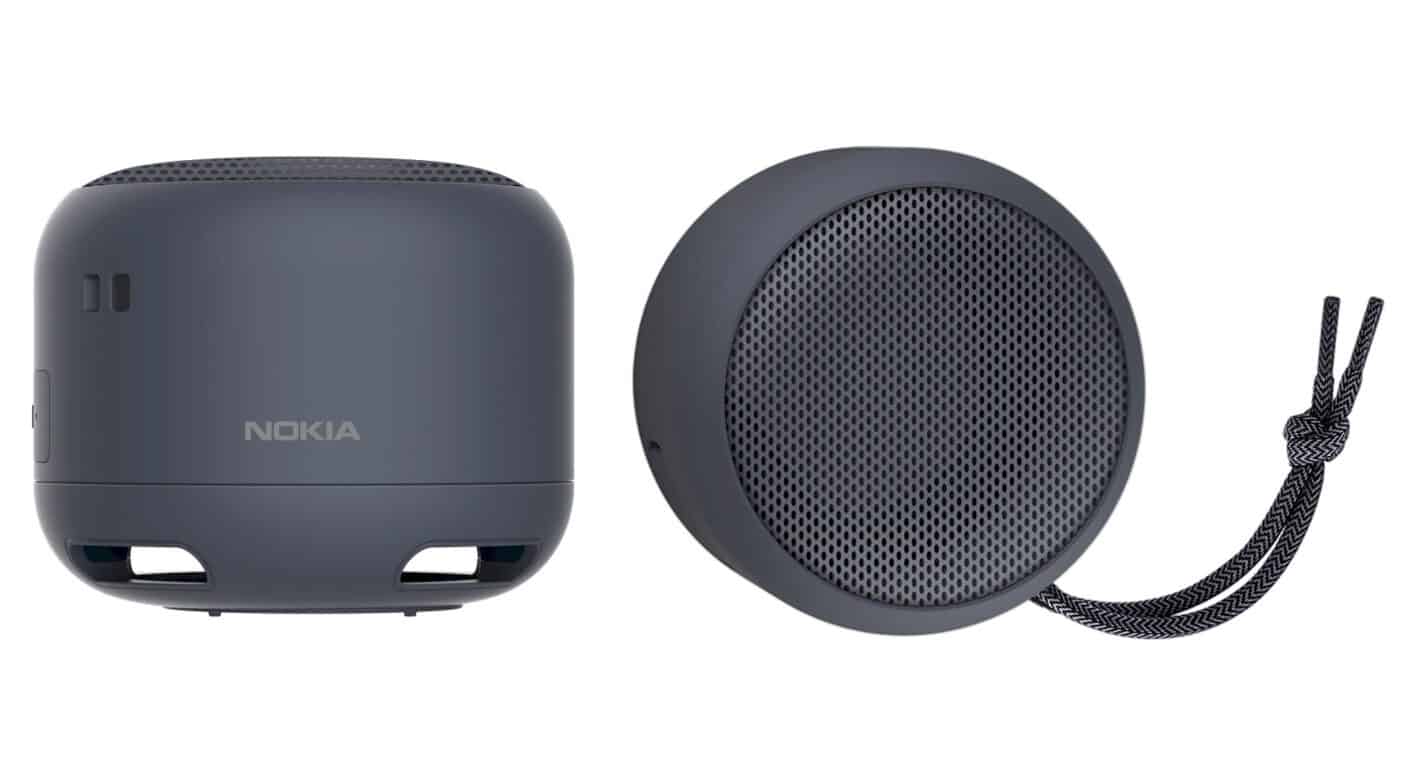 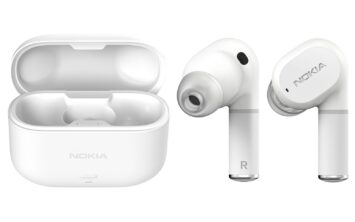 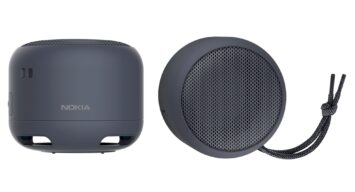