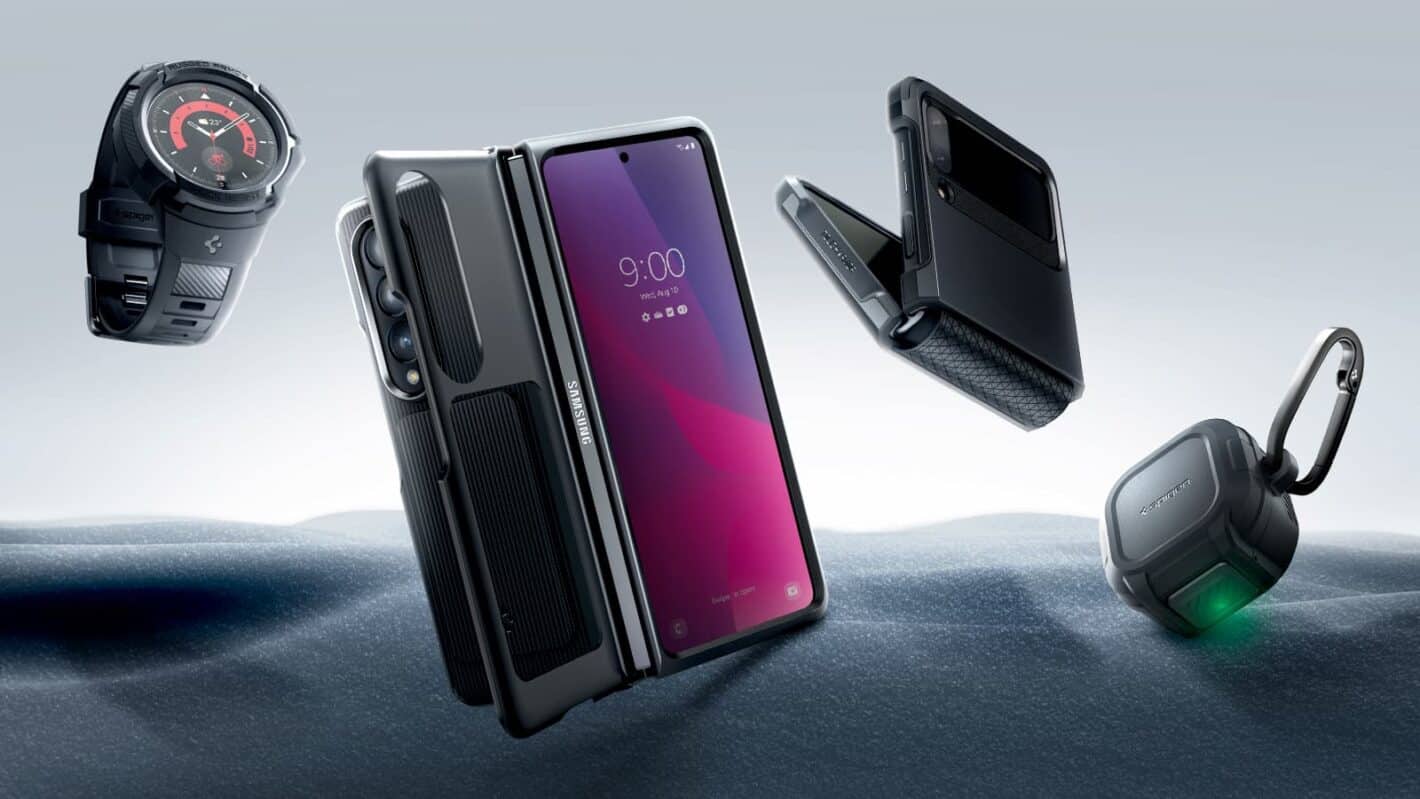 For those who haven’t decided on a protective case for their new Galaxy foldable, whether the Galaxy Z Flip 4 or Galaxy Z Fold 4, prominent case-maker Spigen has announced protection for both gadgets and a few others from Samsung.

Those include not only a couple of new accessories such as the “TinTap” phone grip. That gadget serves as a way to hold a phone more easily and works as a kickstand. But Spigen also has a new LockFit case for Samsung Galaxy Buds Pro. The new case wraps around the carrying and charging case for the earbuds. Effectively helping to keep the carrying case closed so the buds don’t fall out. And, of course, working to protect the case, too.

The company also has a new rugged case for the Samsung Galaxy Watch 5. The protective shell is slim-fitting, with an adjustable band and a metal clasp. Raised bezels protect the wearable’s screen, while the material in use is both shock-absorbant and scratch-resistant. Moreover, the case is entirely compatible with all of Samsung’s health-measuring and tracking features.

What are the new Spigen cases for Samsung’s new Galaxy foldable phones?

Now, as noted above, the biggest of the announcements from Spigen is its brand new cases to suit either of Samsung’s new Galaxy-branded foldable phones. And they’re on sale now at Amazon, slated to arrive just in time for the phones themselves.

Of course, all of the new accessories come with Spigen’s reputation-worthy levels of protection. And that includes offering that protection with form-fitting design languages that keep the bulk down and ports and buttons accessible. It’s the focal points setting them apart from one another are worth taking a look at.

First is the new Spigen Slim Armor Pro for the Samsung Galaxy Z Fold 4. That’s been slimmed down from the previous version while adding even more durability. All while maintaining the case line-up’s primary purpose of protecting the hinge on Samsung’s foldable tablet phone.

This time around, though, Slim Armor Pro also comes in a Pen Edition variant. As might be guessed, that adds a pen holster, placed on the left-hand edge.

Spigen also unveiled a new version of its Neo Hybrid S case for Galaxy Z Fold 4. Build-quality has gotten a boost this time around. And a new metal kickstand is included in the design for use in tablet mode.

For the Samsung Galaxy Z Flip 4, which has a higher focus on style and a more compact design, Spigen has followed suit. First up is the new Air Skin for Z Flip case, available in light blue and rose-purple to match available phone configurations.

Those who want to see the phone itself and not just imitate the color on the case, conversely, will enjoy the new Thin Fit Ring for Galaxy Z Flip 4. That’s a transparent case with a key-ring style loop built-in on the hinge side for easier carrying.

In terms of pricing, details for the Spigen TinTap and LockFit have not been revealed. But costs for the remaining cases are already available. Starting with the Spigen Rugged Armor Pro for Galaxy Watch at just $21.99.