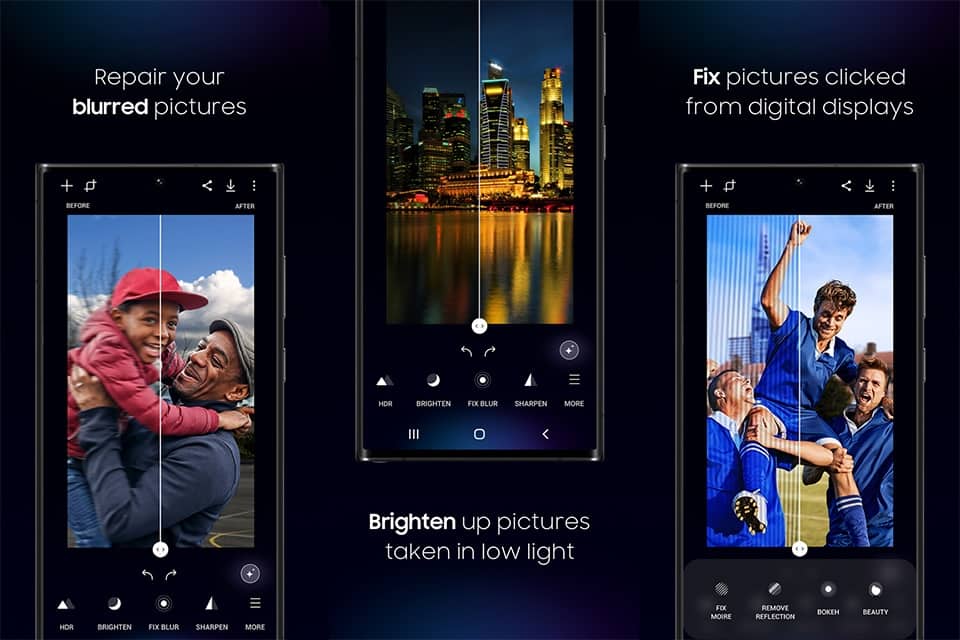 Samsung has developed an AI-powered image enhancement app. Named Galaxy Enhance-X, the company quietly released the app on its Galaxy Store earlier this month, on July 7. It lets Galaxy users quickly improve the quality of existing images on their device with just a few taps.

The initial release lets you quickly fix blurred images, brighten up pictures with less than adequate lighting, remove unwanted reflections, sharpen up images, fix HDR, apply portrait effects, beautify images, and remove moiré patterns that appear on pictures taken from digital displays such as TVs. You can also upscale images without losing quality. Galaxy Enhance-X offers multiple upscaling options to choose from. Both the original image and the enhanced copy are saved in the gallery in JPEG format.

The app’s homepage houses the four most-used tools — HDR, Brighten, Fix Blur, and Sharpen. You can tap the More button to pull up four more options — Fix Moire, Remove Reflection, Portrait, and Beauty. Samsung will likely add more features to the app in the future.

Samsung’s Galaxy Enhance-X will compete against some well-established names in the photo editing space, such as Google’s Snapseed, Adobe Lightroom, and Picsart. But the company may give them all a run for their money, at least on Galaxy devices. The Korean firm recently launched a flagship camera app called Expert RAW and it has been received well by Galaxy users. Hopefully, it will give as much importance to Galaxy Enhance-X as Expert RAW.

If you want to try it out, you can click the button below to download the Galaxy Enhance-X app from the Galaxy Store (via). Note that the app may not be available in certain regions as Samsung is still in the process of rolling it out. The company will likely update the app with improvements and bug fixes in the coming weeks. We will keep you posted.