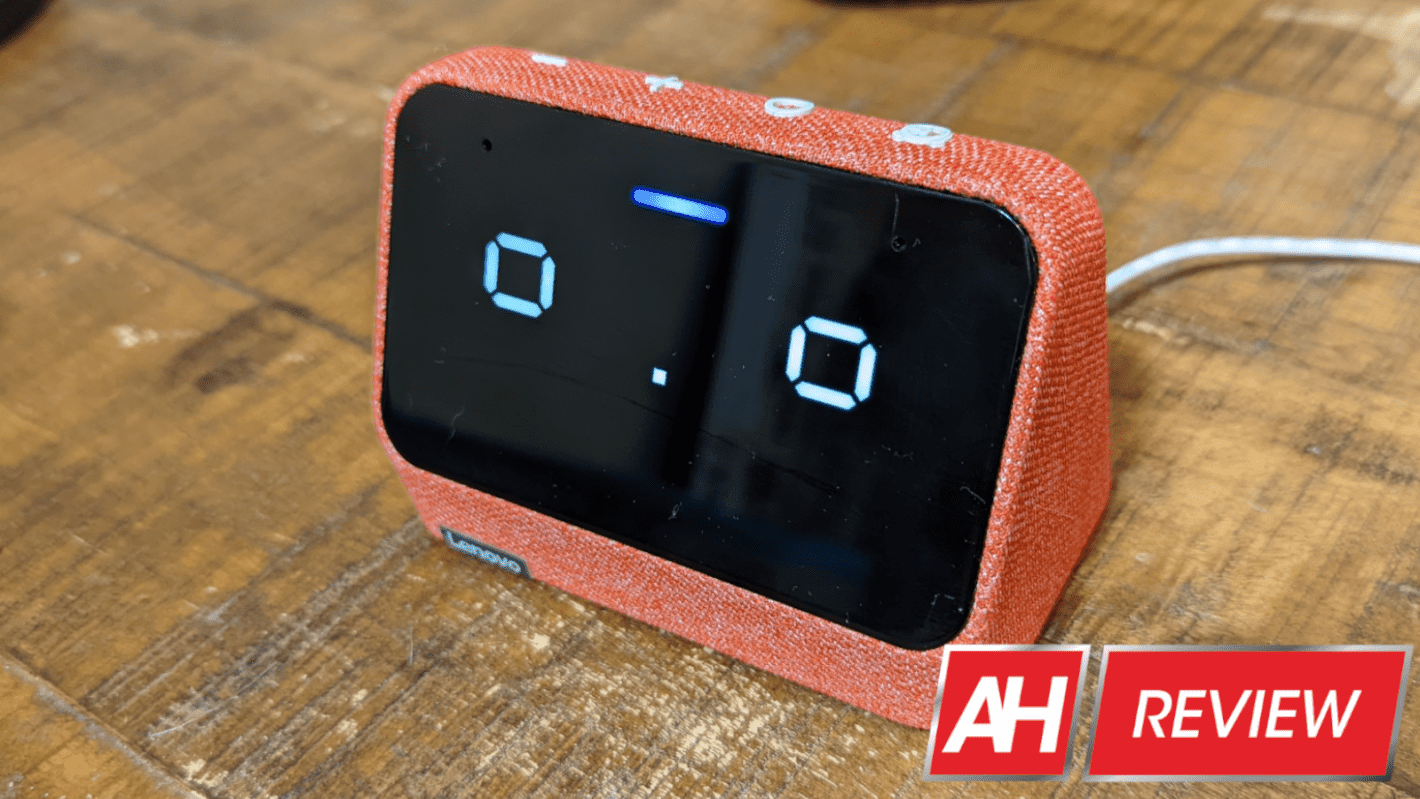 Lenovo's here to show us that Alexa can do what the Google Assistant can do as well.

This review was writing after using the Lenovo Smart Clock Essential for over two weeks.

In a world where voice assistants are becoming more ubiquitous, Lenovo’s presenting us with a smart clock that comes preloaded with Amazon’s Alexa. Here’s a review of the Lenovo Smart Clock Essential to see if this should be your next Alexa device.

When you look at this device, the first thing to come to mind might be the old globular Android emojis. The screen sits inside of a cloth housing that flattens at the bottom. Compared to the previous version of this clock, it looks a bit comical. 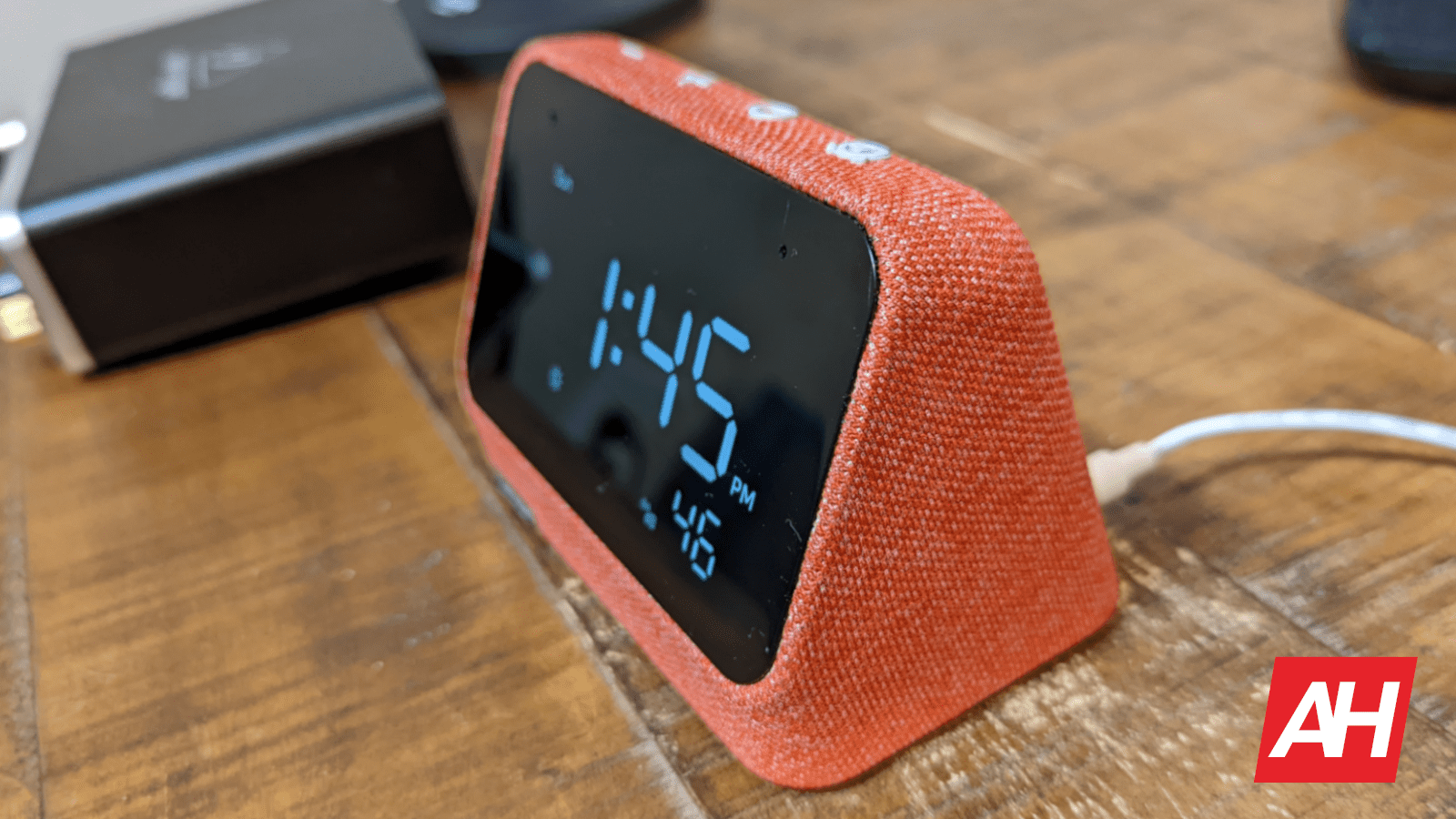 Overall, this smart clock has a weird, yet likable, aesthetic to it. It’s small enough to be placed onto a desk or end table without taking up too much space. It shouldn’t take up much more space than a traditional alarm clock.

The Lenovo Smart Clock Essential has a large LCD “calculator” display that shows you a lot of relevant information constantly. Though the clock is relatively small, the display is big enough to show you information clearly. 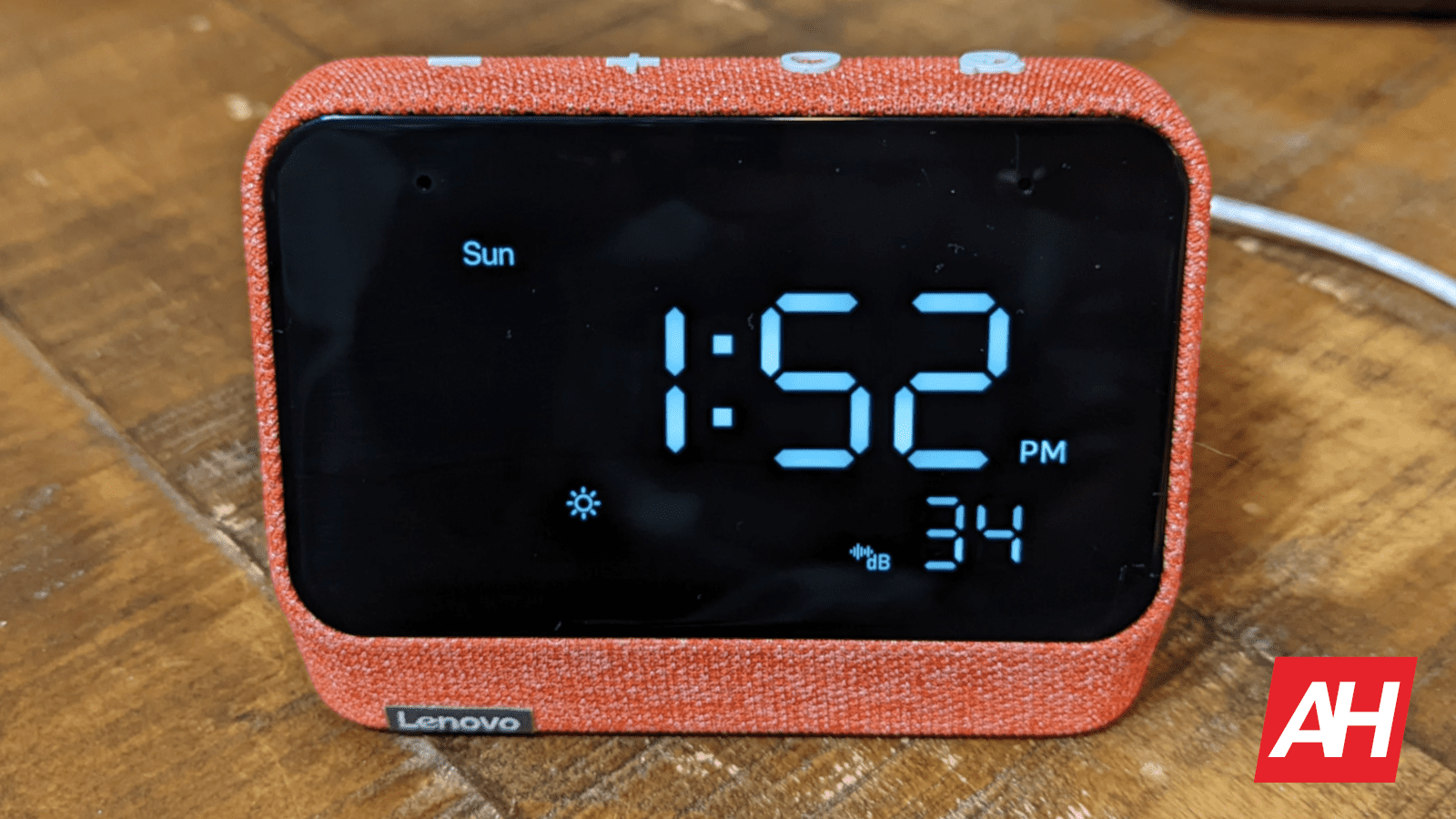 When you summon Alexa, you’ll see a circle appear on both the left and right side of the display; they’re supposed to be eyes. They represent an attentive Alexa waiting for a command (and they actually blink).

It displays all sorts of information

While this screen isn’t as advanced as a smart display’s, the Lenovo Smart Clock Essential can still display a ton of information.

On the bottom right of the display, you’ll get the temperature in either Fahrenheit or Celsius. That section will either hold the temperature or the sound level measured in dB. Next to that, you’ll see your current humidity and, right next to it, you have an indoor icon.

On the left side of the display, you’ll see an icon to let you when the microphones are muted. Right above that, you’ll see a little clock icon if you have an alarm set.

I had high expectations about this device’s media-playing capabilities after using the previous version. That version came with the Google Assistant loaded, and it seemed to be a bit more centered around playing media. It had a really full and rich sound that was pleasing to the ears. However, the Alexa-powered version is definitely not meant to be your next media device, and there are several reasons.

Firstly, the play/pause button that was on the older version has been replaced with the Alexa button. This means that if you want to play or pause the media, you’ll have to summon Alexa and say “pause (or play) music”. It works, but it’s not as intuitive as a simple button. 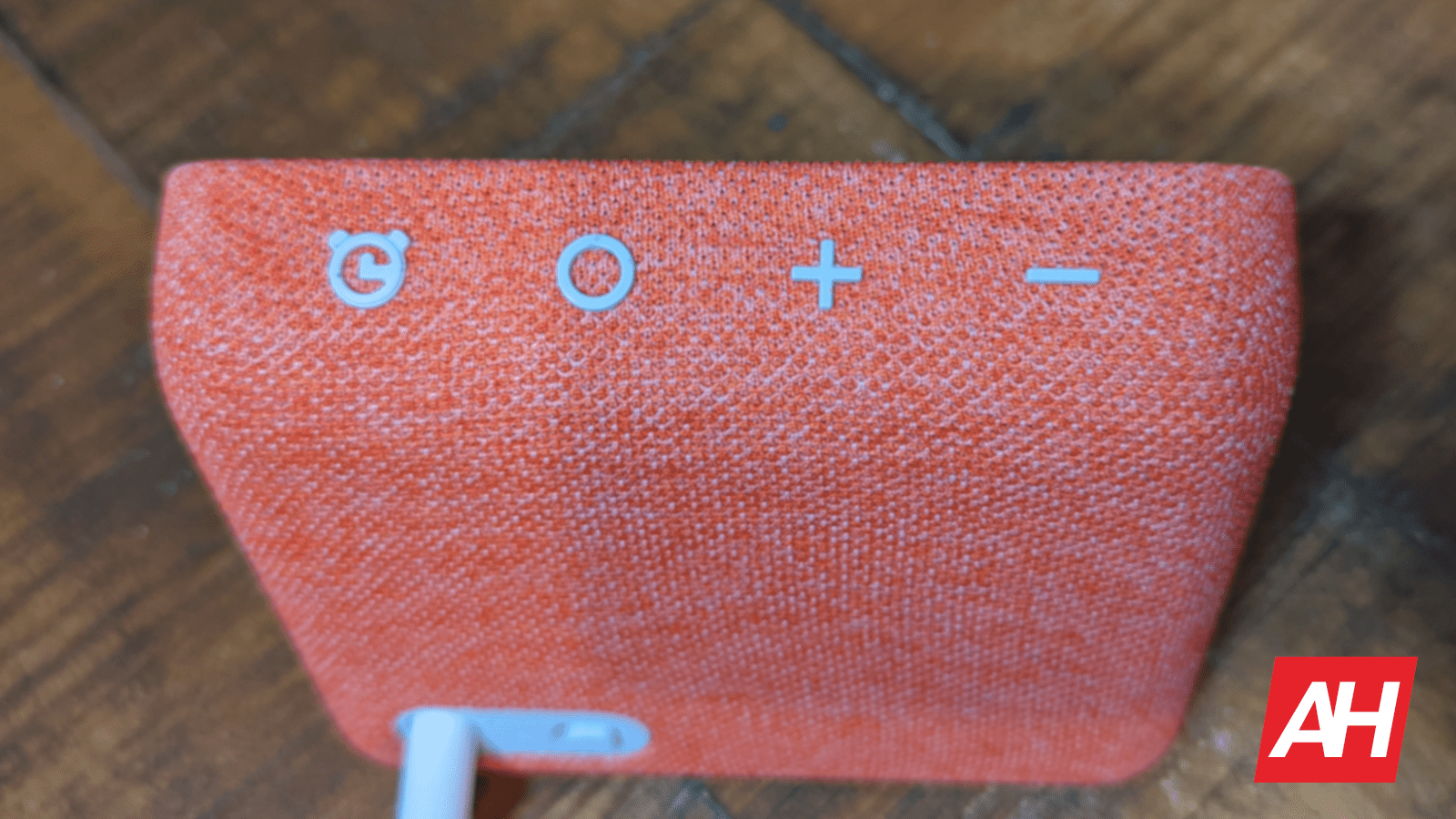 The main reason, however, is the audio quality. Music does NOT sound good on this device, whatsoever. Now, that’s not a complaint; it seems that the company didn’t tune these speakers to play your favorite tunes. While music doesn’t come through nicely, Alexa’s voice sounds perfect. Basically, it sounds like the speakers were tuned to project Alexa’s voice above anything else. Music was just an afterthought.

If you’re in a pinch, you can use this to play music, but be warned that it’ll sound really tinny. Also, when you’re adjusting the volume, the difference between each level is rather large. It’ll be hard finding the perfect volume level for your situation.

Now, a lot of this device’s functionality is tied up in its use as an Alexa speaker. It’s always listening, so all you have to do is say the hotword, and you’ll access the assistant.

Using this clock as an Alexa device is extremely smooth. For starters, summoning Alexa takes no effort. The microphones are powerful enough to pick up your voice from across the room. I tested the microphone by saying “Alexa” at a relatively quiet level about 22 feet away from the clock, and it picked my voice up; the AC was also on, which added extra ambient noise. 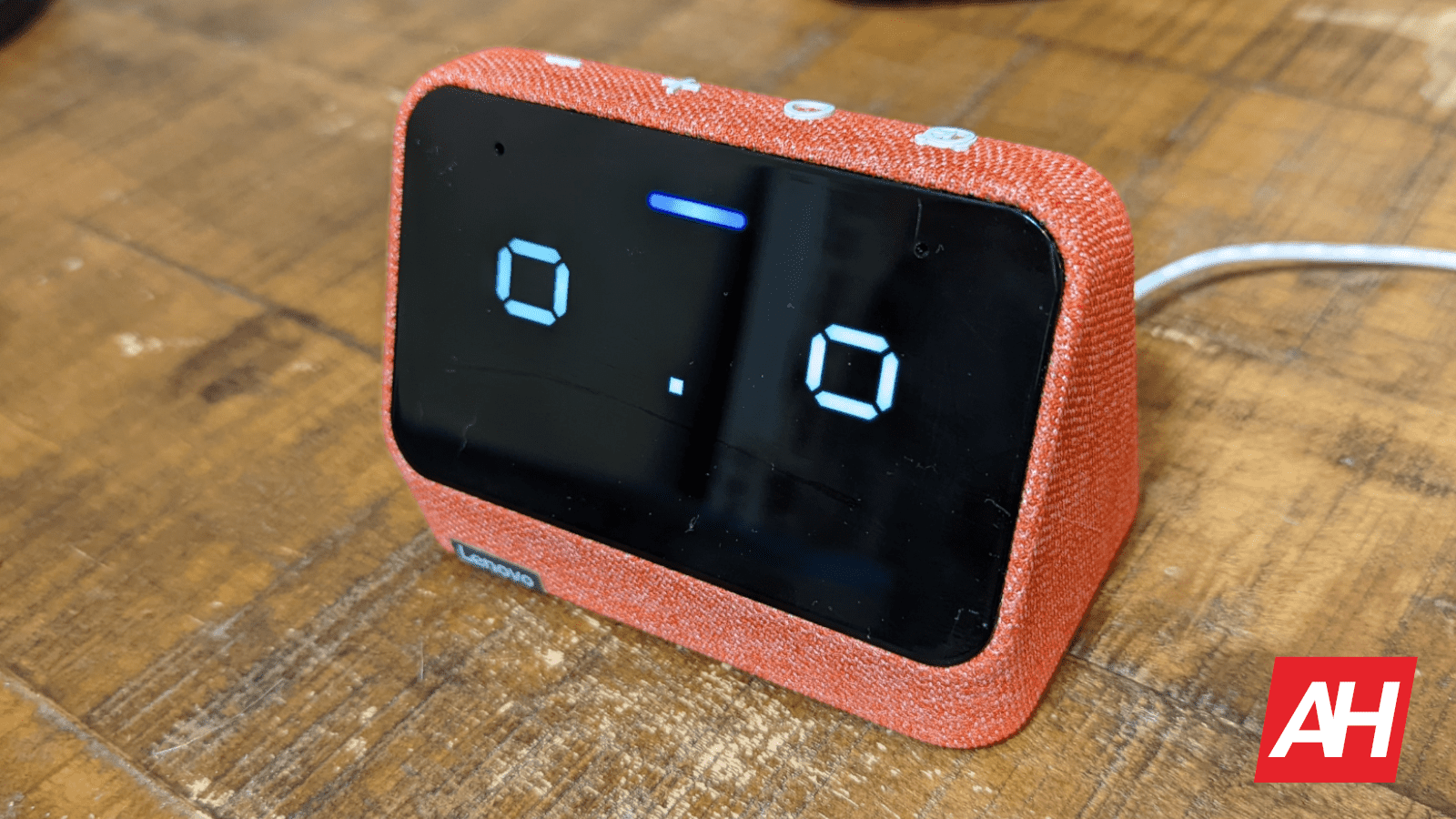 Also, Alexa activates instantly. I can summon the assistant and go right into saying my command without any hesitation. For some devices, you’d have to wait for the assistant to activate before you can say your command. If you use the assistant a lot, that could become annoying.

Should you buy the Lenovo Smart Clock Essential?

The Lenovo Smart Clock Essential is a really simple device for people who want simplicity. It’s a clock through and through, so it will primarily show the time and weather, and that’s it.

The main draw to this device is the integration of Amazon’s Alexa. If you’re an Alexa user, and you want to have just a simple device to summon the assistant, then this device should be perfect for you.

It’s really fast and responsive, and the microphones are great for picking up your voice. You can use it as a little media player, but that’s mostly for casual listening. All in all, this is a great device and I highly recommend it.