Skip to content
Advertisement
Trusted By Millions
Independent, Expert Android News You Can Trust, Since 2010
Publishing More Android Than Anyone Else
0
Today
151
This Week
760
This Month
5325
This Year
122876
All Time
Advertisement

Google has agreed to pay $90 million to settle a class action lawsuit against its Play Store policies. The lawsuit alleged that the company stifled competition by forcing Android developers to use its billing system. On top of that, it charged “exorbitant fees” for transactions. These policies helped the Android maker strengthen its monopoly, while simultaneously impacting developers’ revenue. A group of Android developers in the US legally challenged these Play Store policies citing violation of federal antitrust laws. They will now receive compensation from Google.

Until July last year, Google took a 30 percent cut from every dollar Android developers made from apps distributed through Play Store. Worse yet, developers couldn’t opt for a third-party billing system. They must use the Android maker’s billing system and pay it a hefty chunk of their revenue. For small developers, this money could be critical for their growth.

To that end, Google last year revamped its commission structure to half the revenue cut to 15 percent for the first $1 million revenue a developer generates in a year. This applies to every developer regardless of their size or how much money they make from Android apps. The 30 percent revenue cut will only apply after they have crossed $1 million in revenue for the year. The new policy will remain effective until at least May 25, 2025.

However, the change came too late as a lawsuit was already filed against it. Perhaps Google has conceded that it made the change in response to this suit. Nonetheless, the case was pending in the US District Court for the Northern District of California but the company has decided to settle it out of court. It will pay a total of $90 million as compensation to developers.

This settlement will allow “both parties to move forward and avoid years of uncertain and distracting litigation,” Google said in a blog post.

48,000 Android developers will receive this compensation from Google

Law firm Hagens Berman had filed this class action lawsuit against Google on behalf of 48,000 US Android developers. According to the firm’s press release, almost every (99 percent) US-based Android developer fits the definition of this class action — Google Play earnings of $2 million or less from August 17, 2016, to December 31, 2021. The compensation each developer would receive varies depending on multiple factors. Some developers would receive more than $200,000 while others may have to settle for $250.

As part of this settlement, Google will also create a separate section on the US homepage of the Play Store to highlight apps from independent and small startup developers. This section is called the Indie Apps Corner. The company will further allow developers to use contact information obtained from within the app to communicate with users out-of-app.

Moreover, Google has committed to allowing auto updates from third-party Android app stores for at least three more years. The company first rolled out this change on Android 12 last year, possibly in response to this lawsuit.

Last but not least, Google will publish an annual report containing “meaningful data” regarding the operation of the Play Store. The report will include stats and information on app removals, account terminations, user interactions, and more to help developers make strategic decisions for their products.

“We are excited to see the effects of this settlement,” said Steve W. Berman, co-founder of Hagens Berman and the attorney representing Android developers. “With this settlement, developers will have more room to grow and more money in their pockets to promote their hard efforts.” 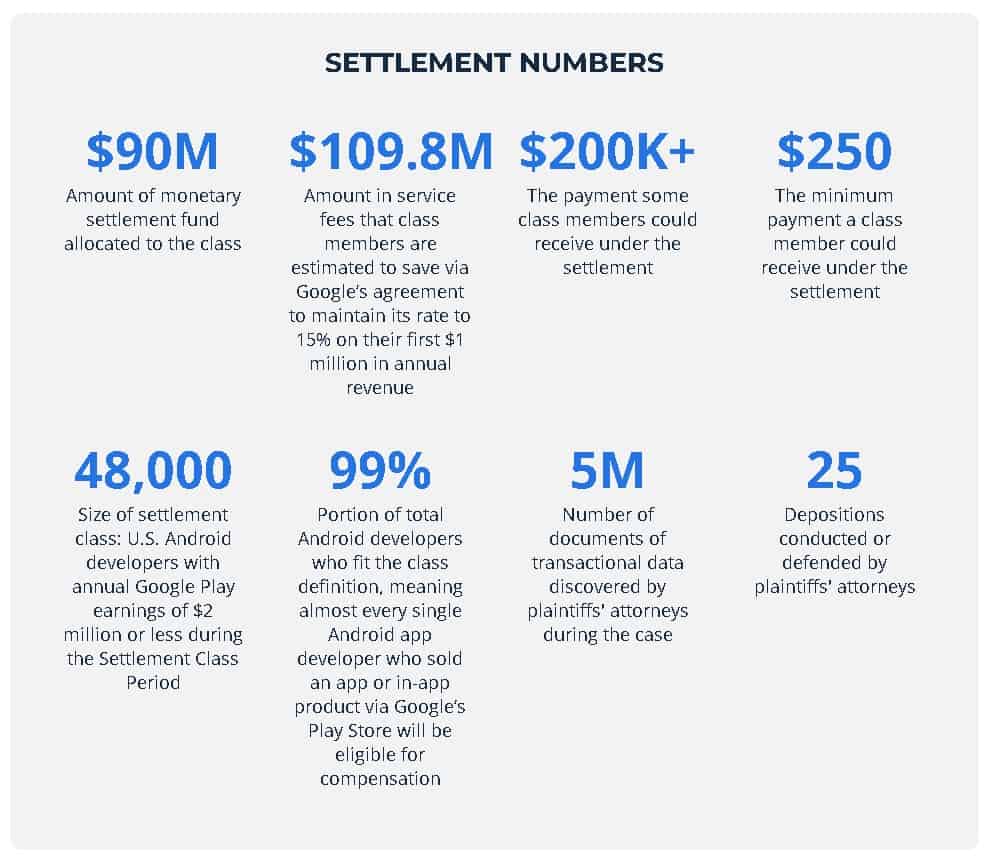