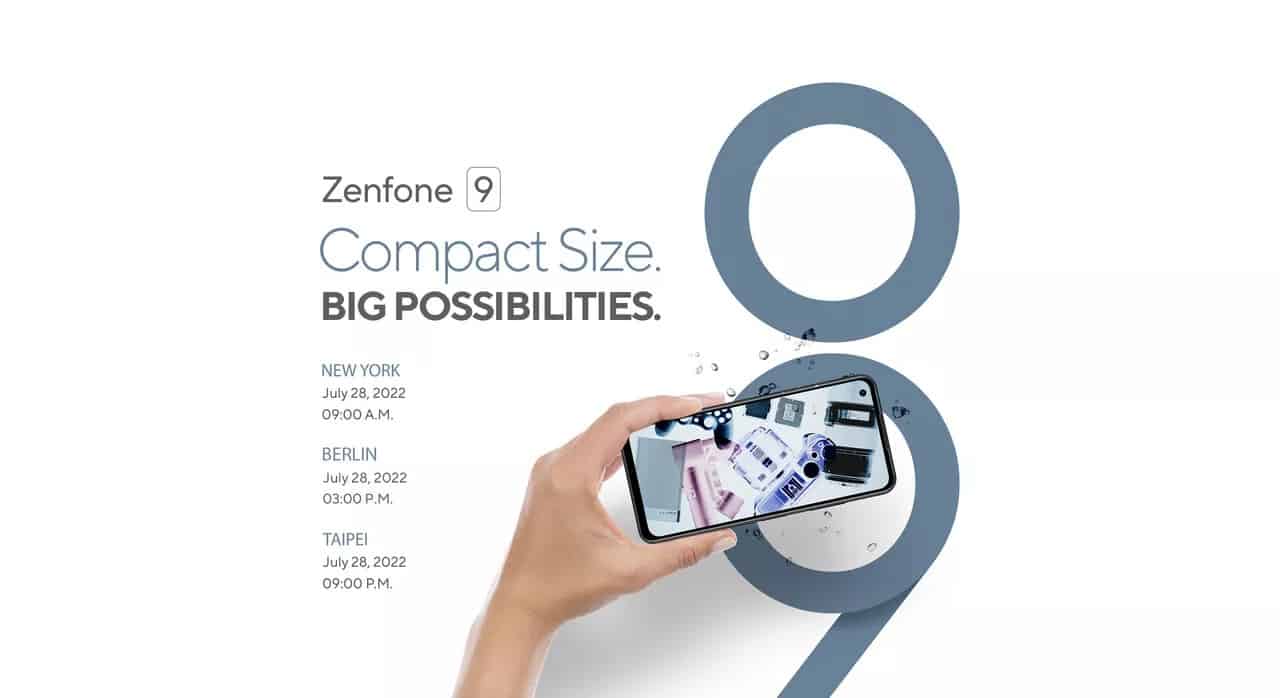 ASUS shared the image you can see below, showing not only the device itself, but confirming its name, and the event itself. The event will kick off at 9 AM EST / 3 PM CET / 9 PM GMT+8.

The ZenFone 9 will launch on July 28, the company confirmed

The company is using the ‘Compact Size. Big Possibilities’ tagline for this launch. The ZenFone 9 follows the ZenFone 8 that arrived in May last year, and it seems like it will be just as compact. The ZenFone 9 will bring some improvements to the table, though.

The device appeared in a seemingly-official promo video that surfaced recently. That 1-minute promo video shared a ton of information about the device. It showed us the phone in detail, while it also shared some of its features, and specifications.

The Snapdragon 8+ Gen 1 SoC will fuel the device

So, the ZenFone 9 will be fueled by the Snapdragon 8+ Gen 1 SoC. That is the most powerful processor Qualcomm has to offer at the moment. The phone will retain its compact size, as it will include a 5.9-inch 120Hz AMOLED display.

A 4,300mAh battery will be utilized as well, as will a 50-megapixel main camera. ASUS will use Sony’s IMX766 sensor this time around, which is an improvement compared to a 64-megapixel camera on the ZenFone 8.

The ‘ZenTouch’ multi-functional power key will also be included

The so-called ZenTouch multi-functional power key will also be included. It will also function as a fingerprint scanner, and a touchpad of sorts. You’ll be able to scroll websites by swiping over it, for example.

Stereo speakers will also be a part of the package, as will an audio jack. The device will be IP68 certified for water and dust resistance as well. So, ASUS is once again trying to please a lot of people, and offer a truly compelling compact flagship, which is not surprising considering that the ZenFone 8 was praised last year.

The ZenFone 9 will also offer a more appealing design this time around. The front side will look more or less the same, but the back won’t be as understated as before. You’ll get two large circular camera islands, and more color options, including black, white, red, and blue options.