The Motorola Moto G GO smartphone has just surfaced, and those images revealed a massive ‘chin’ aka bottom bezel. This leak comes from Sudhanshu Ambhore, a tipster.

As you can see in the picture provided below, both the front and back sides of the device are shown. The Moto G GO smartphone will feature a waterdrop display notch, a thick ‘chin’, and a dual camera. 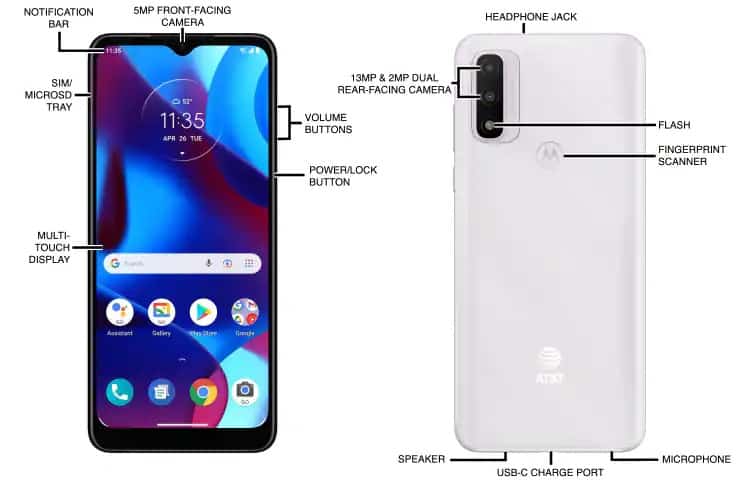 That’s not all, though, an audio jack will sit at the top of the phone, while a fingerprint scanner will be located on the back. On that fingerprint scanner, a Motorola logo is placed, which is something we’ve seen from the company in the past.

The power/lock, and volume rocker buttons are located on the right-hand side. A single LED flash sits below the phone’s rear-facing cameras, while this phone seems to have an AT&T logo on it.

It is also mentioned that a 5-megapixel camera is included inside the phone’s notch. A Type-C USB port will be included at the bottom of this phone, while the device’s back will be curved.

On top of all that, the Moto G GO phone will offer expandable storage. You’ll notice that a SIM/MicroSD card tray is also mentioned in the provided image, and will be located on the left side.

We don’t have any information on the other specs it will include. This will be a budget smartphone, though, as it’s a ‘GO’ phone, so its specs likely won’t be too impressive.

If you’re wondering when will it launch, well, it could happen soon. Motorola actually has an event scheduled for tomorrow, June 7, where the Moto G82 is tipped to arrive. Motorola may mention this GO phone in some capacity during that event, we’ll see. Do note that the variant that leaked seems to be tied to AT&T.