The Motorola Edge (2022) got benchmarked by Geekbench. That listing did confirm some information about the upcoming device, while it also suggested the phone will launch soon.

The Motorola Edge (2022) got benchmarked by Geekbench

First and foremost, it’s worth saying that the Motorola Edge (2022) scored 745 points in the single-core test, and 2,142 points in the multi-core test. The device is fueled by the MediaTek Dimensity 1050 SoC. 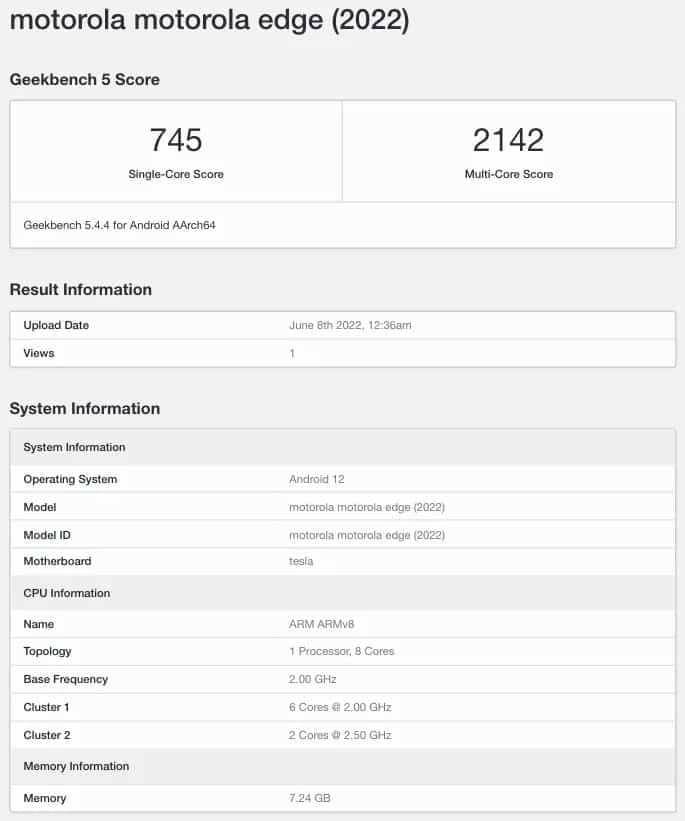 That SoC comes with the Mali G610 GPU, and we’re looking at an octa-core chip here. The MediaTek Dimensity 1050 is manufactured by TSMC, using a 6nm process, and it was announced not long ago.

Geekbench also confirmed that the device will include 8GB of RAM, though that may not be the only variant, of course. Android 12 was also confirmed by this listing.

That is all the information that Geekbench shared, but the phone’s specs did surface a while back. We know exactly what to expect out of it, both from the spec and design departments.

The phone will likely feature a 6.5-inch fullHD+ pOLED display with a 144Hz refresh rate. Both 6GB and 8GB RAM models were tipped, with 128GB and 256GB of internal storage.

A large battery will be included, along with four cameras

A 5,000mAh battery was also mentioned in a recent leak, as were four cameras. Three of those four cameras will sit on the back of the device. A 50-megapixel main camera is said to be backed by a 13-megapixel ultrawide camera, and a third 2-megapixel unit. A single 32-megapixel selfie camera is also coming.

The phone itself will offer a rather modern design. It will have somewhat thin bezels, though its bottom bezel will be thicker than the rest. A centered display camera hole will also be a part of the package.

Its rear-facing cameras will be vertically-aligned, and placed in the top-left corner. Motorola’s branding will be present on the back of the phone, in two places, actually.

The Motorola Edge (2022) is expected to launch soon, though we’re not sure when exactly.