Global wearable shipments stood at 105.3 million in the first quarter of 2022. This represents a year-over-year reduction of 3% in shipments, as per a new IDC report. Last week, a Canalys report spoke of a similar decline among basic wearables in Q1 2022. So it seems like the demand for wearables is waning.

IDC attributes the decline in wearable shipments to reduced demand

The latest report is part of the IDC Worldwide Quarterly Wearable Device Tracker. According to the research firm, the decline can be explained by consumers’ willingness to “spend more in categories outside of wearables.”

“Cooling demand will force companies to further differentiate themselves. With most features becoming increasingly common among the different devices, companies will have to convince customers to upgrade with best-in-class experiences knowing that there are plenty of alternatives available. This will call for new hardware, software, and services that will both surprise and delight, and keep customers engaged,” said Ramon T. Llamas, research director, Mobile Devices and AR/VR at IDC.

Although the wearable market saw an overall decline last year, some categories didn’t do so poorly. Hearables (earbuds, headphones, etc) witnessed a 0.6% decline in growth. Much like wearables, hearables also saw a surge in shipments during the early stages of the pandemic.

Meanwhile, shipments of wristbands fell by 40.5% due to supply issues and diminishing demand. But there’s some good news. IDC’s data found that watch shipments increased by 9.1% in Q1 2022. Consequently, the watch segment captured 28% of the wearables market. 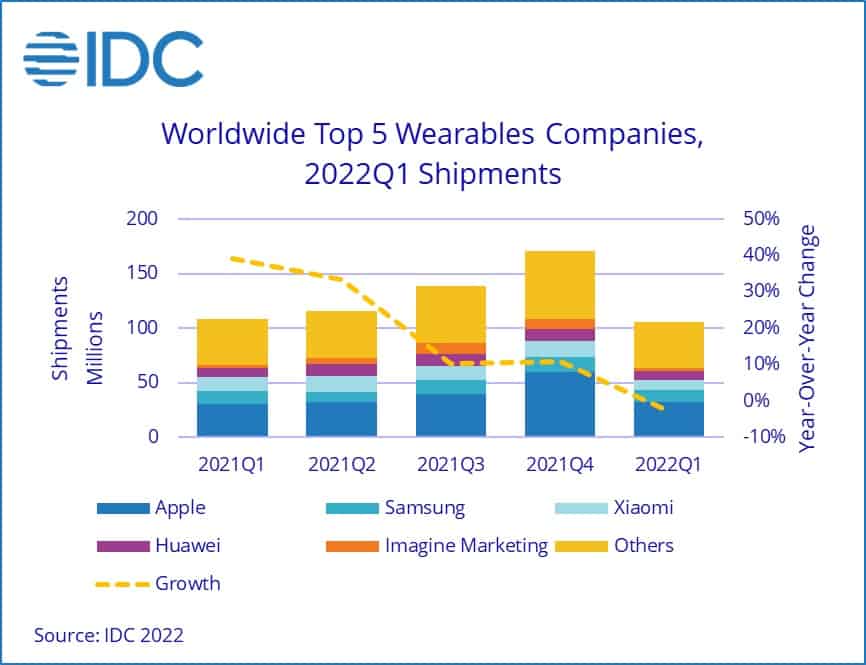 Apple continued to dominate the wearables segment, with Samsung standing firmly in the second spot. The latter’s unit shipments fell by 10% year-over-year. The South Korean manufacturer depends heavily on bundling its wearables with its flagship phones.

But as IDC notes, Samsung also had to deal with lower-priced alternatives from a wide range of manufacturers. Fortunately for the company, its watch shipments increased by 32.7%, thanks to the Galaxy Watch 4 series.

Xiaomi, Huawei, and Imagine Marketing make up the rest of the global top 5 OEMs list

Companies like Xiaomi, Huawei, and Imagine Marketing (boAt), round off the global top 5 manufacturers list. Going by this IDC data, the decline in shipments could continue throughout 2022. Keeping this in mind, manufacturers may have to shift their strategy to turn things around.