We’re all waiting for the ability to edit our tweets. This feature is slated to launch relatively soon on Twitter Blue, then trickle down to the public. Thanks to a tweet from Nima Owji, we know that when you post a tweet, you’ll see a timer letting you know how long you have to edit it.

Several weeks back, Elon Musk asked if users wanted the ability to edit tweets, and the majority of people said yes. Since then, we got word that the company had been working on the feature since last year. When it launches, it will be exclusive to Twitter Blue users for testing. In the meanwhile, we’re still relying on leaks and rumors to gather more information on this new feature.

Not too long ago, we got word that you’ll have a limited time to edit your tweets. That seems a bit tedious, but Twitter believes in holding people accountable for the tweets they post. Giving people a limited amount of time to edit their tweets means that they won’t be able to go back and edit their past tweets.

Now, thanks to a screenshot from Owji, we have a glimpse of what a tweet will look like during the editing process. It looks like it was taken on the desktop version rather than on the app. When you post a tweet, you’ll see a timer in the upper right corner letting you know how much time you have to edit it.

There’s something to note about this screenshot, however. The previous reports pointed to users having a full hour to edit their tweets. In the screenshot, we see that Owji has only 30 minutes to edit his tweet. While it’s possible that he just caught the shot at the right moment, it still brings up the question: Did Twitter reduce the time that you have to edit your tweets? 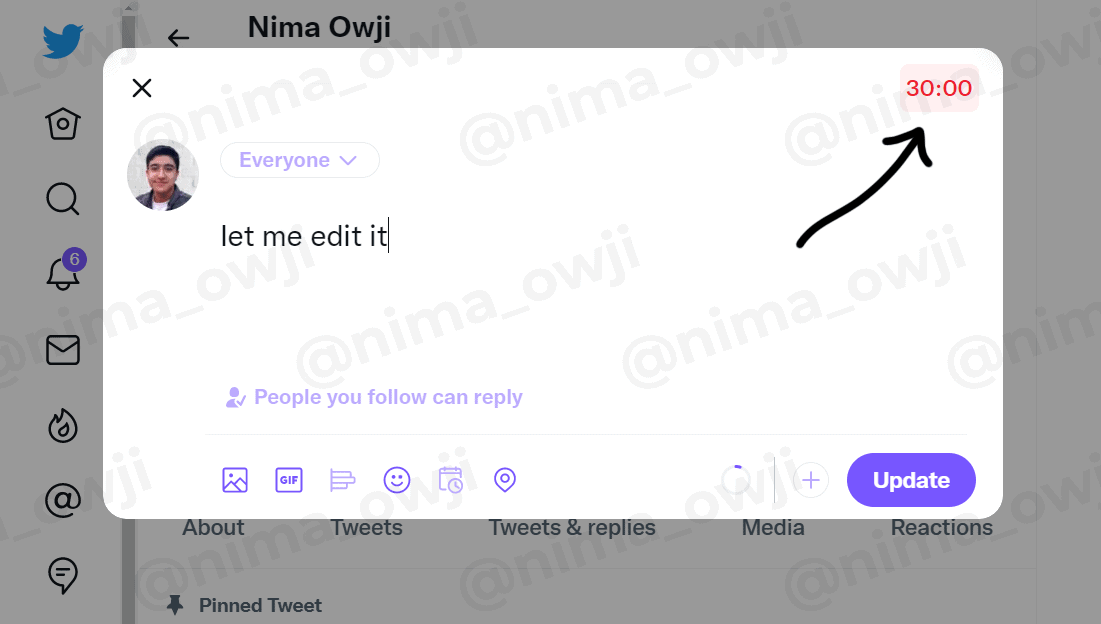 Along with this information, there’s also word about the original tweet. When you edit a tweet, you’re not really changing it. You’re making a copy of that tweet and posting a new version.

When you edit a tweet, no one will be able to interact with the original tweet anymore. This means that no one can comment or even react to it. We’re still waiting for this feature to come out, so we should get more information when it gets closer to launching.