Samsung‘s fourth-gen foldables — Galaxy Z Flip 4 and Galaxy Z Fold 4—  are gradually taking shape. As we inch toward their official unveiling in a few months, new details about the devices keep popping up. Today, we have confirmation that the Flip 4 will be powered by the Snapdragon 8 Gen 1+ processor. The Fold 4 should get the same chipset too.

The US version of the Galaxy Z Flip 4 has appeared on benchmarking website Geekbench with model number SM-F721U. The listing reveals that the device will feature Qualcomm’s “taro” processor. While the Snapdragon 8 Gen 1 is also identified by the same codename, the higher clock speeds confirm it is the “Plus” iteration that will go official tomorrow, May 20th.

The Geekbench listing also reveals that the Galaxy Z Flip 4 will get 8GB of RAM, though there may be a 6GB RAM variant as well. The device will expectedly run Android 12 out of the box. Android 13 won’t quite be ready in time for the new foldable. We do expect Samsung to ship the phone with a newer One UI skin, possibly called One UI 4.5. 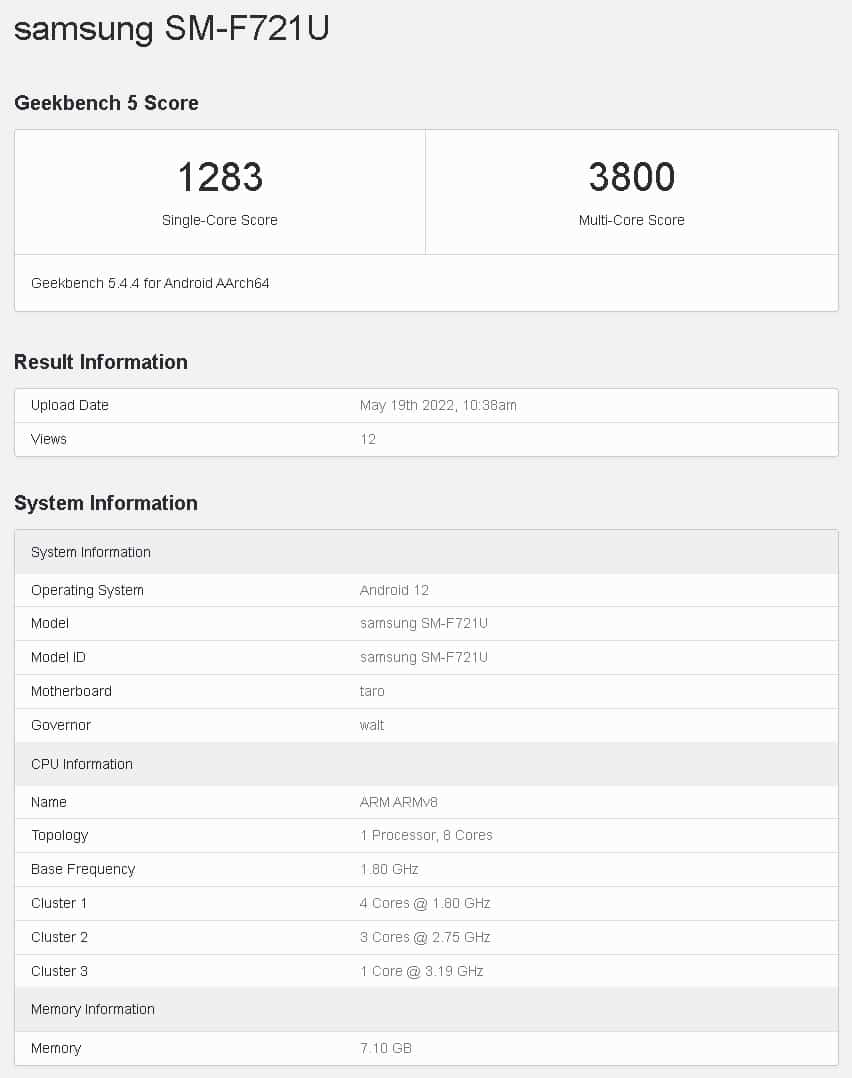 The Galaxy Z Flip 4 is getting a bigger battery too

There have been contrasting reports regarding the battery capacity of the Galaxy Z Flip 4 over the past few weeks. While the device was initially reported to get a 3,400mAh battery, recent reports suggest Samsung will equip the foldable with a 3,700mAh unit. It appears the latter was true.

The upcoming clamshell foldable just picked up a 3C certification in China for its batteries. We can see it houses two battery units with capacities of 2,555mah and 1,040mAh. The combined capacity comes in at 3,595mAh. Samsung will likely advertise it as a typical capacity of 3,700mah.

A separate 3C certification for the Galaxy Z Flip 4’s charger earlier this month revealed that the new foldable will also see a much-needed upgrade in terms of charging speed. It will now come with 25W fast charging, over the 15W that the Flip 3 shipped with. Don’t expect Samsung to include the charging adapter in the retail box though. The company may be facing legal actions over the decision in some countries but it’s unlikely to retract unless forced to.