Samsung has slipped to the fourth spot on Forbes’ annual ranking of the World’s Largest Tech Companies in 2022. The Korean behemoth is down two places from the second spot in 2021. Alphabet (Google’s parent company) and Microsoft have leapfrogged it to capture the second and third spots this year, respectively. Apple leads the chart for the seventh straight year.

According to Forbes, supply-chain woes due to component shortages, as well as coronavirus lockdowns in China, have affected Samsung’s business. The company has managed to keep the boat sailing amid the turmoil, posting record sales of $244.2 billion over the past year, up from $200.7 billion the year before. But it simultaneously suffered a steady stock plunge as well. Its market value is down almost 30 percent to $367.3 billion. In 2021, the Korean firm recorded $510.5 billion in market value.

Apple, on the other hand, saw its market capitalization grow about 13 percent to $2.6 trillion, continuing its stronghold as the most valuable company in the world. Its sales are also up nearly 29 percent to a record $378.7 billion. But Forbes notes that the storied iPhone-maker isn’t the most profitable company out there anymore. Saudi Arabian public petroleum and natural gas company Saudi Aramco takes that honor, thanks to soaring oil prices.

Coming back to the tech companies, the growing demand for digital ad spaces and Google’s near monopoly in this business enabled Alphabet to climb onto the second spot with record sales of $257.5 billion. Forbes reports its market cap to be $1.6 trillion.

Microsoft’s expertise and dominance in cloud software also propelled it to the third spot in the list of the World’s Largest Tech Companies in 2022. Forbes says the Windows-maker posted sales of $184.9 billion over the past year. Its market value for 2022 comes in at $2.1 trillion.

Following the aforementioned four tech biggies on Forbes’ list of the World’s Largest Tech Companies in 2022 is Chinese Internet giant Tencent at the fifth position, unchanged from last year. Meta (aka Facebook) and Intel also held onto their respective sixth and seventh spots. TSMC climbed up a spot to eighth, with Cisco and IBM rounding out the top ten.

Overall, 164 global companies made it into the list this year, down from 177 last year. But the combined annual revenue still jumped over 21 percent to $4 trillion from $3.3 trillion. 72 of the world’s 164 largest tech companies in 2022 are based in the US, Forbes notes. China (21 companies), Taiwan (15), and Japan (12) are other tech hotspots around the world. The chart features companies from 24 different countries. 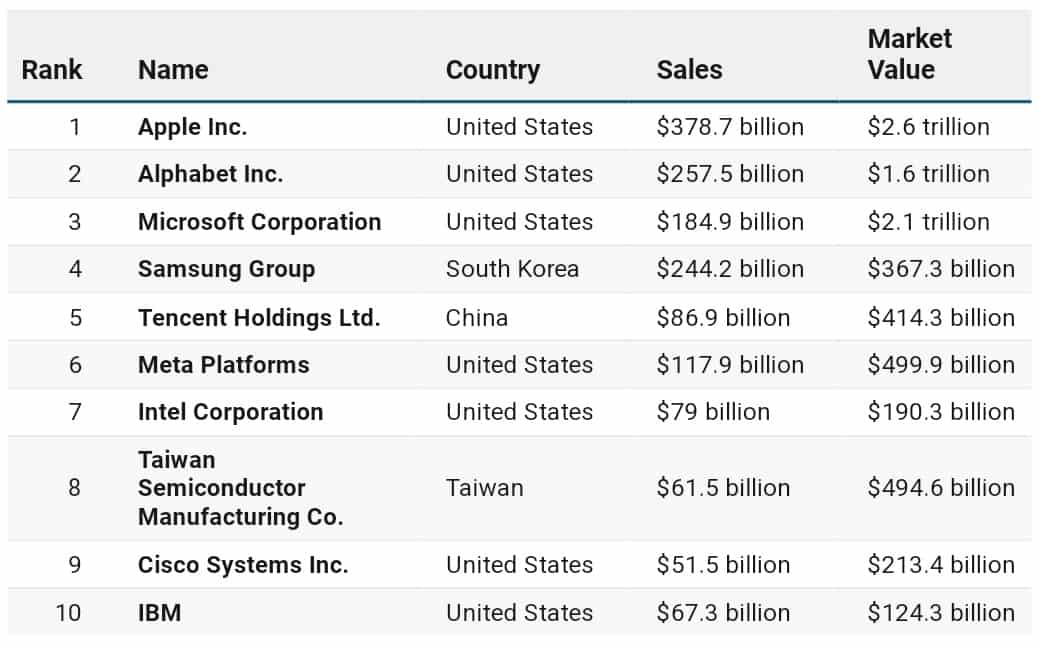