Along with the 2.4GHz, 5GHz, and 6GHz bands that the current Wi-Fi standard use, Wi-Fi 7 can also leverage much wider 320Mhz channels as well as 4K quadrature amplitude modulation (QAM) technology. This allows for double the throughput over Wi-Fi 6 with ultra-low latency. These improvements make the new solutions ideal for real-time gaming, streaming, and XR (extended reality) applications.

The new wireless technology also supports Multi-Link Operation (MLO) for minimal interference. MLO is akin to carrier aggregation in mobile. It enables devices to simultaneously utilize multiple radio bands and channel frequencies for low latency even in heavily congested connections. Adaptive Interface Puncturing (AIP) will discard the spectrum slots that are too congested to use.

According to Qualcomm, these advancements will enable the new wireless solution to allow for “custom architectural design optimized for multi-user environments, to power the collaboration, telepresence, XR, metaverse, and immersive gaming applications of today and tomorrow’s home and enterprise environments.”

Wi-Fi 7 isn’t yet ready for the masses

It hasn’t been long since Wi-Fi 6E came into existence. It saw mass adoption in 2020, a year after Wi-Fi 6. But Wi-Fi 6E-enabled devices aren’t quite prevalent yet. However, we are already seeing Wi-Fi 7 getting real. Apart from Qualcomm, the likes of Broadcomm and MediaTek have also showcased their respective Wi-Fi 7 solutions.

Dubbed Wi-Fi 802.11be by IEEE (Institute of Electrical and Electronics Engineers), the new standard isn’t yet ready for mass adoption though. The complete Wi-Fi 7 standard certifications aren’t expected to arrive before 2024. So there’s still a long way to go before we can get to taste these advancements in wireless technology.

Qualcomm says it has begun sampling the Wi-Fi 7 Networking Pro Series. The solutions are now available to its global development partners. You can expect more companies to come up with their respective Wi-Fi 7 portfolio in the coming months. We will keep you posted. 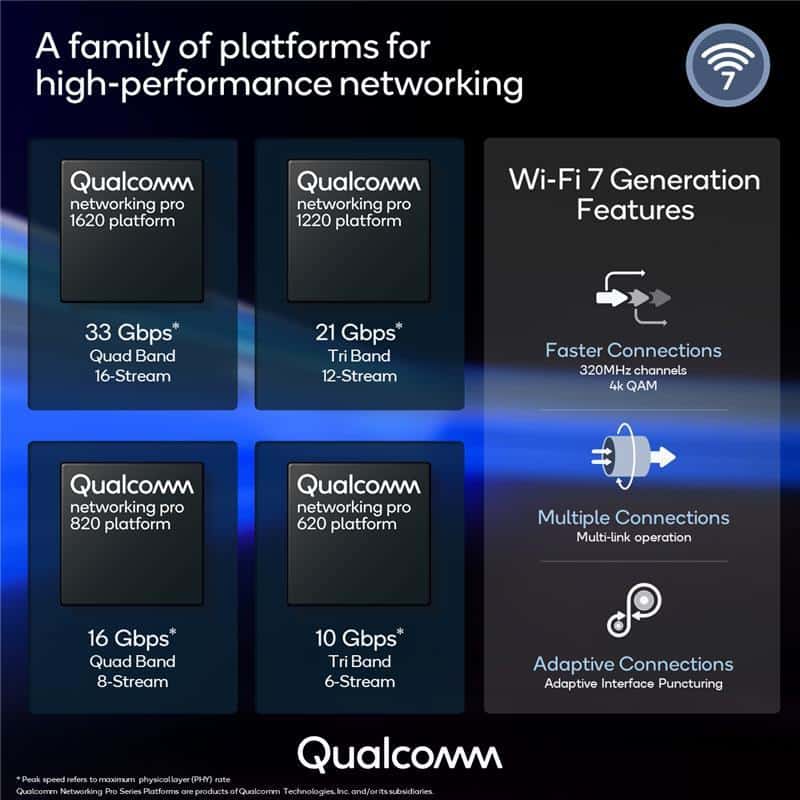