The Motorola Moto G42 is coming, the device’s design got revealed recently, and now its partial specifications surfaced. The device got listed on Geekbench, which is where this information is coming from.

Considering this is Geekbench we’re talking about, we’re not getting an awful lot of spec info. Some did get shared, though. Qualcomm’s ‘hawao’ SoC got mentioned in the listing, and that basically confirms the Snapdragon 680 4G SoC will fuel the device. 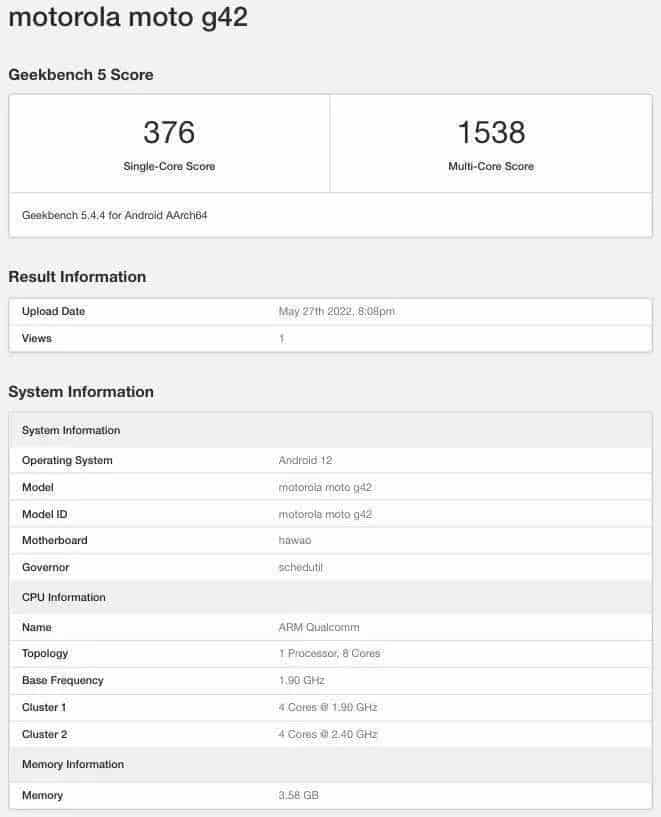 The variant of the device listed on Geekbench includes 4GB of RAM. That doesn’t have to mean other variants won’t be on offer, though, of course. In fact, we’ll likely see more than one RAM and storage variant.

Android 12 will fuel this smartphone, that info is also confirmed in the listing. The Moto G42 managed to score 376 points in the single-core, and 1,538 points in the multi-core test on Geekbench.

It is worth noting that the device got certified in a number of places recently. It was spotted on BIS, FCC; EEC, WiFi Alliance, and TDRA. That more or less confirms that it will launch in the near future, likely any day now.

The design got revealed quite recently

The phone’s design got shared recently as well. The Moto G42 will feature a flat display, with a centered display camera hole. Its bottom bezel will be thicker than the rest of them.

You can expect three cameras on the back of the device, while its sides will be flat. All the physical keys will sit on the right-hand side, while the company’s brandings will be present on the back.

We’re not entirely sure when will the phone launch, but considering the sheer number of certifications it has gone through, the launch is right around the corner. It’s even possible this will be a silent launch, as this is a budget phone.