Based on the frequency of leaks related to the OnePlus Nord 2T, the phone is quite close to an official launch. The device has now made its way to Geekbench, confirming some hardware attributes in the process.

As per the benchmark listing, the OnePlus Nord 2T will pack the 6nm MediaTek Dimensity 1300 chipset. This also means that the Nord 2T will be the first global device to feature MediaTek’s new silicon.

The chipset upgrade makes sense considering that the standard Nord 2 features the Dimensity 1200 SoC. Geekbench scores generally offer a good idea about a device’s performance. OnePlus’ latest offering scored 474 points on the single-core test and 2,933 on the multi-core test.

The Nord 2T bears the model number CPH2399 (via MySmartPrice), while it will reportedly make its way to the Indian market soon. The OnePlus mid-ranger will also launch across Europe, as revealed by a recent listing on AliExpress.

The Geekbench listing also reveals that the Nord 2T will sport at least 8GB of RAM and Android 12 (OxygenOS 12). Thanks to the aforementioned leak on AliExpress, we’ve learned that the phone would hit the markets in Black and Green colors. The Nord 2T should offer a 6.43-inch fullHD+ AMOLED display (90Hz) and a 4,500mAh battery with 80W fast charging support. 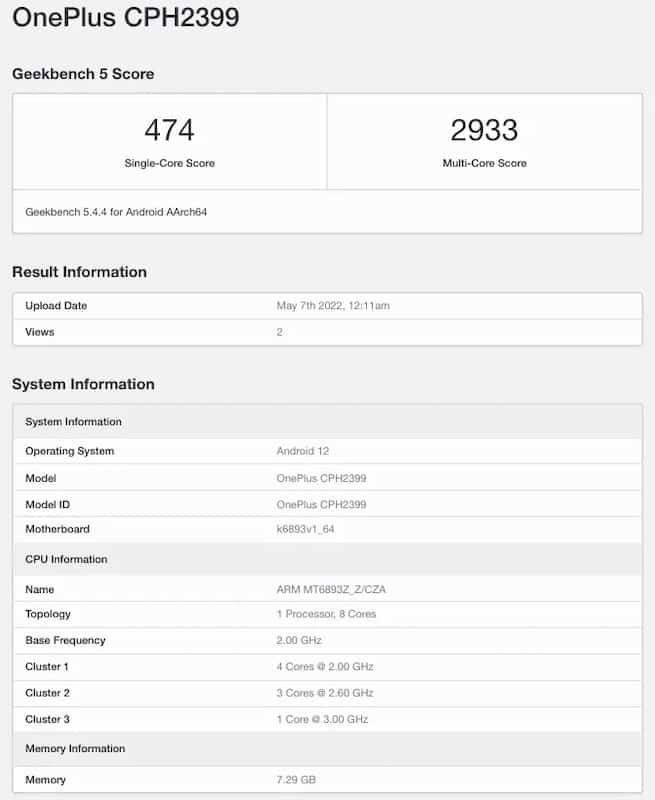 A 50-megapixel Sony IMX766 primary camera, along with an 8-megapixel ultrawide sensor and a 2-megapixel monochrome sensor make up the rear cameras. Meanwhile, OnePlus will reportedly offer a 32-megapixel front camera with the Nord 2T. The specs sheet suggests that the Nord 2T could be a significantly improved version of the Nord 2.

Early reports suggest that OnePlus will unveil the Nord 2T towards the end of this month. The device is likely to cost under $400 in most markets, including India. OnePlus seems to be testing another device codenamed ‘Meili,’ which will likely be called the Nord 3, based on OnePlus India’s website.

The OnePlus Nord 3 could feature a 6.7-inch fullHD+ screen with a 90 or 120Hz display refresh rate. It could feature 12GB of LPDDR5 RAM, and a 4,500mAh battery with 150W fast wired charging. Reports also indicate that the Nord 3 would pack MediaTek’s powerful Dimensity 8100 octa-core chip.