In 2020, MediaTek dethroned Qualcomm as the world’s biggest smartphone chipset vendor for the first time. The Taiwanese company hasn’t looked back since. It captured 44 percent of the market in 2021, against Qualcomm’s 35 percent. But MediaTek is still struggling to challenge its American rival in the flagship segment. Its market is pretty much limited to sub-$600 devices, the latest numbers from research firm Counterpoint Research show.

According to the new report, MediaTek was a market leader in the budget segment (under $300) in Q1 2022. Its market share in the $100-$199 price bracket is 63 percent. But as you go higher, the Taiwanese firm starts to lose ground to Qualcomm. Above $500, Mediatek has a mere 12 percent share in the market.

The budget market is a volume driver, so it’s not surprising that MediaTek is leading the industry as a whole. In Q1 2022, its revenues grew 32 percent year-over-year (YoY) and 10.2 percent quarter-over-quarter (QoQ) to reach $4.8 billion. Qualcomm, on the other hand, posted its third consecutive quarterly record revenue of $11.6 billion this past quarter. This speaks volumes about the company’s dominance in the high-end market. It leads every price segment above $300.

This failure to penetrate the premium segment should be worrying MediaTek. It returned to the flagship market with the Dimensity lineup in 2019. Over the past couple of years, the company has significantly improved its premium offerings. The latest Dimensity 9000 is on par with Qualcomm’s Snapdragon 8 Gen 1 on paper.

However, phone makers still prefer Qualcomm’s solutions when it comes to flagship products. So MediaTek has its task cut out to challenge the American giant in this segment. Counterpoint believes flagship Dimensity chipsets could see greater adoption in the second quarter of the year. So there’s some hope for MediaTek there.

Samsung’s share in the smartphone chipset market is declining

Despite making its own Exynos-branded smartphone processors, Samsung uses chipsets from other brands as well. Perhaps it is now increasingly using MediaTek and Qualcomm processors in its phones. So much so that the market share of Exynos chipsets is declining rapidly.

Samsung’s market share in budget and mid-range segments was pretty much non-existent in Q1 2022. Above $600, the company has a notable presence. The launch of the Galaxy S21 FE and the Galaxy S22 series with Exynos processors in some markets has helped it gain some share in this market.

The Korean firm also recently launched the Galaxy A33 and Galaxy A53 powered by the Exynos 1280 SoC. So the sub-$600 segment could look a little better from its perspective in the second quarter.

Counterpoint’s latest report also features HiSilicon (Huawei), UNISOC, and Google. But they hardly influence the market. HiSilicon is on the way out as the US sanctions have limited its functioning and the inventory is depleted. UNISOC is also limited to the budget segment. Google, meanwhile, launched the Pixel 6 series with its in-house Tensor processor manufactured by Samsung. The chipset isn’t found inside any other device. 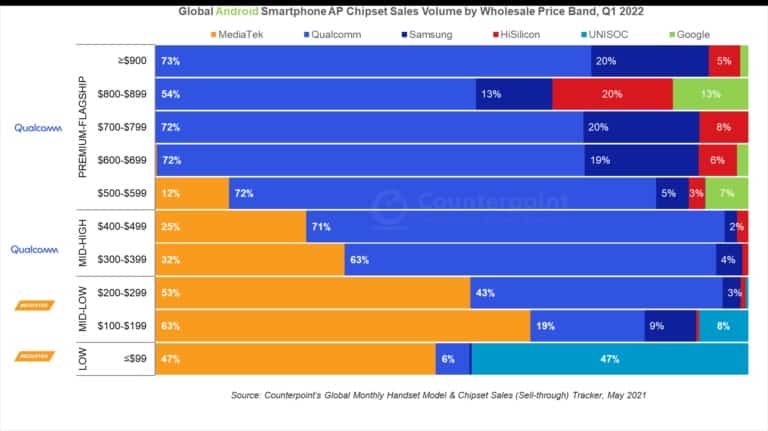