The IFA 2022 event in September will mark the comeback of the mid-year consumer electronics exhibition after a gap of two years. Organizers have now announced ticket sales for the event in Berlin, Germany.

The lineup of participating companies includes Fitbit, Siemens, TP-Link, and a handful of other companies. “Two-thirds of IFA’s Top exhibitors have already confirmed their attendance, with a huge number of exhibitors planning to return at the same scale as in 2019, the last IFA year before the pandemic,” organizers of the event said (via GSM Arena).

IFA 2022 will begin on September 2 and last until September 6, 2022. Interested visitors can purchase tickets for a single day, two days, or the entire 5-day event. Availability depends on the tickets you want to purchase.

For example, the 1-day SEB (super-early-bird) tickets are on sale now and will last until May 31. Meanwhile, the 1 day and 2-day early bird tickets will be available between June 1 and August 31. The standard 5-day tickets will be available June 1, while the 1-day and 2-day standard tickets will go on sale starting September 1. As is the case with any ticket-based event, early-bird customers save quite a bit, with prices starting from €35 for a single-day ticket. 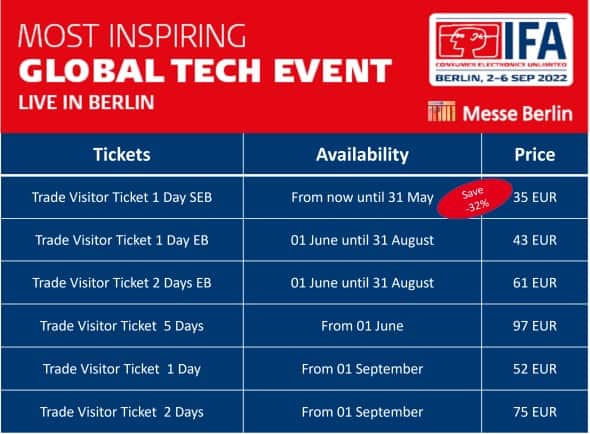 The event lineup looks decent for the time being. But it’s nowhere close to what we used to see in past IFA events. However, with a few months left to go, we expect more companies to join the exhibition to showcase their innovations.

To refresh your memory, IFA 2020 witnessed the arrival of a handful of Samsung devices, including the Galaxy Tab S7+. Although the tablet was originally unveiled in August 2020, the company launched pre-orders for the device at IFA 2020. Samsung also took the wraps off the Galaxy Z Fold 2 during the event in 2020. This makes us hopeful that the manufacturer may unveil the Galaxy Z Fold 4 and Z Flip 4 at IFA 2022.

Last year’s Galaxy Z Fold 3 and Z Flip 3 were unveiled at a dedicated Samsung event. But since IFA is making a comeback this year, it’s likely that Samsung’s next foldables will break cover in Berlin. Rumors suggest that Samsung’s upcoming foldables will launch in September, adding more weight to this theory.