The HONOR 70 series is coming on May 30, and the company’s teaser is quite revealing

We don’t really know much about the HONOR 70 series, but the company did share a teaser. If you take a look at the provided image below, you’ll see the back design of the device. 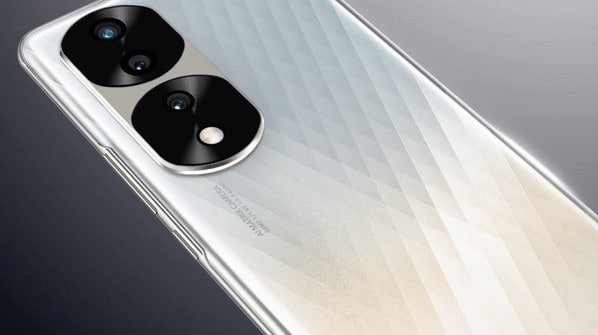 You’ll notice two oval cutouts dedicated to cameras, and they’re all a part of the camera island in the top-left corner. The back side has an interesting pattern, at least on this variant, and that’s almost certainly a glass back we’re looking at.

Something else you’ll notice here is that the phone will include three cameras on the back. We presume this is the ‘Pro+’ variant, but both the ‘Pro’ and vanilla models are also expected to launch.

Three cameras will sit on the back, including a 54-megapixel custom unit

This teaser also reveals some camera details. The HONOR 70 series is said to include a custom 54-megapixel main camera. That will be a 1/1.49-inch sensor with an f/1.9 aperture. We’re not sure if it will be included on all models, but chances are it will.

Do note that the HONOR 70 series will likely be the company’s mid-range lineup, but a truly powerful mid-range lineup. If we had to guess, we’d say that the Snapdragon 7 Gen 1 SoC will fuel these devices.

That processor will become official next week, alongside the Snapdragon 8 Gen 1+. That’s perfect timing, actually, as the HONOR 70 series is coming right after that.

The HONOR 70 series is also expected to utilize a 6.67-inch fullHD+ OLED display with a 120Hz refresh rate. A 4,800mAh battery was also mentioned, and so was 100W charging.

Do note that it’s possible some of these features won’t be available on all models. Those aspects may differ from one model to the next, we’ll have to wait and see.