Given the annual refresh cycle of flagship smartphones, depreciation is a significant factor to consider. A new survey by phone trading marketplace SellCell pits the Samsung Galaxy S22 against the Google Pixel 6 and the Apple iPhone 13 to determine which device loses its value the most after a couple of months of use.

SellCell compared the depreciating value of the three phones over two months, finding that the Galaxy S22’s value shrunk by 46.8% over its original price tag. The Pixel 6 was the second-worst, with its value down 41.5% two months after release. Meanwhile, the iPhone 13 only lost 16.4% of its value in the same period.

As per SellCell’s data, the iPhone 13 mini’s value depreciated by 18.7% after a month but somehow witnessed a 2.3% improvement a month later. The same happened with the Pixel 6 too, which lost 43.1% of its value in the first month but rebounded to 41.5% the next month. 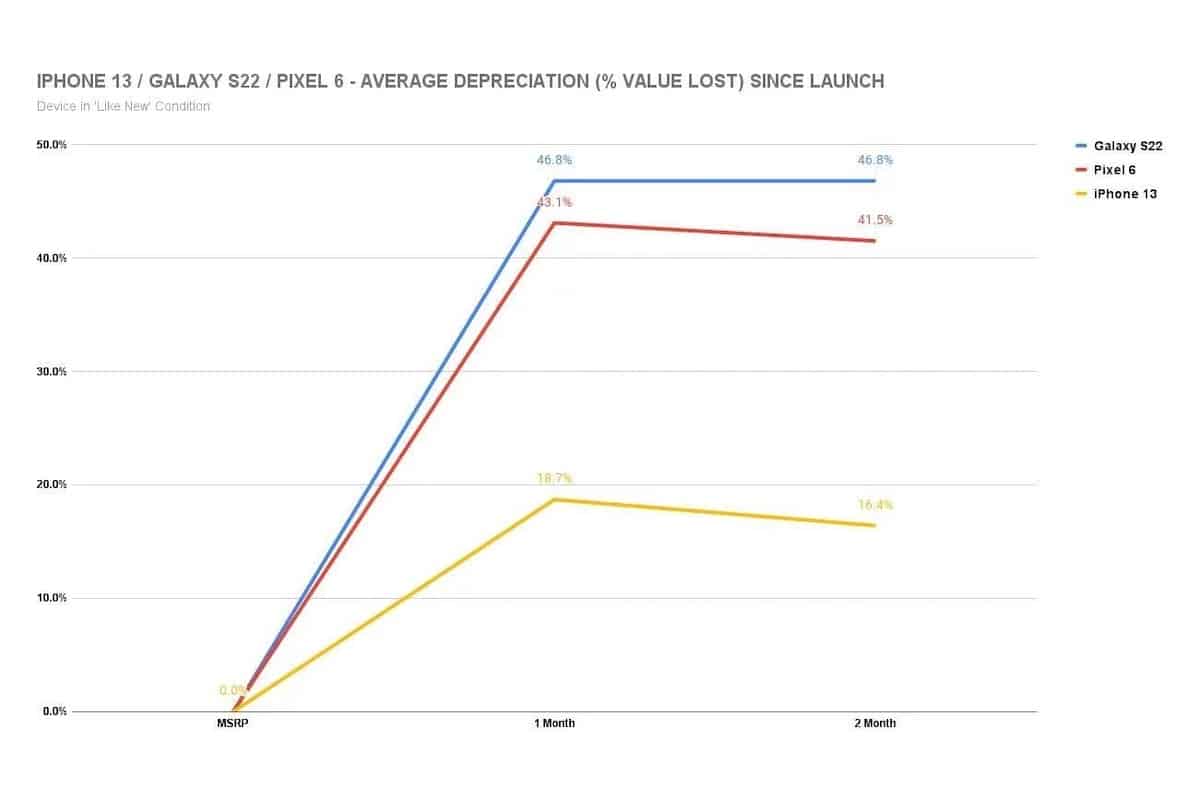 The Galaxy S22, on the other hand, was consistent in terms of value depreciation, staying firm at 46.8% after the first and second months. As Phone Arena points out, this also suggests that the Galaxy S22’s depreciation is plateauing, so it’s probably not all bad news for the South Korean manufacturer. The devices used in this survey are supposedly in “Like New” condition, indicating that they’re barely used and have no visible damage.

The good news for Android fans is that the Pixel 6 has surpassed expectations, despite some early setbacks during its initial release. So it’s no secret that this is currently Google’s most successful smartphone. The worst of the lot was the Galaxy S22 Plus, as per SellCell. The flagship lost 53.8% of its value in just two months.

Google’s worst came from the Pixel 6 Pro (256GB), losing 45.7% of its value. For Apple, it was the 128GB iPhone 13 mini (29.2%). The 128GB iPhone 13 Pro Max takes the crown for losing the least value, at just 3.8% after two months. These results align with historical trends wherein an iPhone rakes in more value than a competing Android device. But the emergence of the Pixel 6 is indeed a silver lining for Google.