It seems like the vast majority of antivirus apps track their users, according to a new report by Cybernews (via Phone Arena). That’s not exactly the whole story, though, read on.

This is not exactly surprising, as many apps out there track their users, but antivirus and similar apps are all about protecting their users. So, it would be nice if they don’t track you while trying to keep malware away. Some of these apps seem to be quite sketchy in their practices.

Many antivirus apps track you, and some seem to be quite sketchy as well

Based on this report, out of the 40 most downloaded cleaning and antivirus apps in the Google Play Store, just two are clean of obvious data privacy threats. That’s according to the latest report by Cybernews.

Now, the two apps that are tracker-free, are the ‘Super Antivirus – Clean Virus’ and ‘VG Enterprise Web SDK’. Even those two apps did not impress when it comes to security, though. Cybernews did not exactly share the details behind its assessment, so keep that in mind.

Cybernews also didn’t detail the amount or type of data tracked by the other 36 apps. What the company did mention, is that six of those apps contain links to “potentially malicious domains”. Needless to say, that is worrisome. Those six apps are listed below

Now, the company also shared a list of apps that are “only” tracking your data. Here’s a list.

The image Cybernews shared is included below. The higher the score, the better the security features are (tracking aside). 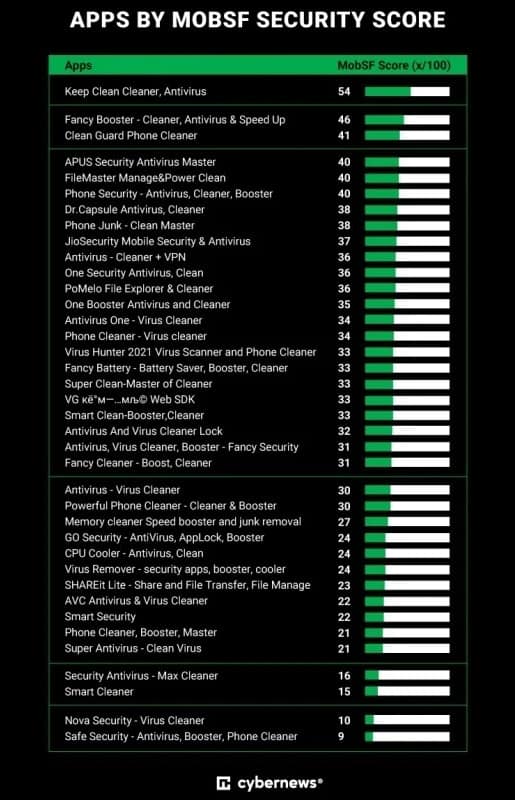 Some people think antivirus apps are not necessary on Android

So, should you avoid antivirus / cleaning apps altogether? Well, depending on who you ask, antivirus apps may not even be necessary on Android, at all. You just have to be careful where you download apps from, and what permissions you give them. That’s not something everyone would agree on, though, as some people think antivirus apps are a must. It’s up to you to decide.