Samsung was the world’s first company to commercially launch a 5G smartphone. Its Galaxy S10 5G, which arrived in April 2019 after a slight delay, set the tone for a new era of cellular connectivity. The current smartphone market is full of 5G-enabled devices at almost every price point. But even after three years, no Android smartphone manufacturer is selling more 5G devices than Samsung. According to research firm Counterpoint Research, the top four best-selling 5G Android smartphones in February 2022 were all Samsung-made. The Korean behemoth had five models in the top ten.

The Galaxy A52s 5G, which launched in September last year, has featured in the top ten best-selling 5G Android smartphones list ever since it hit the market. It had topped the chart in January this year and came out on top in February as well. The mid-ranger accounted for 2.9 percent of all 5G smartphones sold globally in the month.

Following it closely was the Galaxy S22 Ultra 5G with a 2.87 percent share. The flagship went on sale late in February, so that’s quite a climb it made there. The new “Note” phone has been seeing a sky-high demand since the pre-orders began thanks to its built-in S Pen support.

The Galaxy S21 FE also sold excellently in February 2022. Despite the arrival of the Galaxy S22 for just $100 more, the theoretically affordable Samsung flagship that costs $700 was the third best-selling 5G smartphone in the month. It captured 2.63 percent of the global market.

Samsung also had the Galaxy A32 5G and Galaxy A22 5G in the top ten, in the fourth and tenth spot respectively. According to the new Counterpoint report, almost 24 percent of the 5G smartphones sold globally in February 2022 were made by the Korean brand.

The Oppo Reno 7 5G, Honor 60, Vivo S12, Xiaomi Redmi K40, and Honor X30 were the other five models in the top ten, in that order. Overall, these ten models accounted for 20 percent of 5G devices sold globally during the month.

The 5G smartphone market is on the rise

It’s been three years since 5G smartphones have become available in the market. But even today, 5G is seen as a new cellular connectivity technology. That’s primarily because 5G networks aren’t available globally. Most countries have yet to begin trials, let alone launch commercial networks.

However, this hasn’t stopped companies launch 5G-enabled devices in those markets. As a result, the 5G smartphone market is growing rapidly. Over the next couple of years, the majority of smartphones sold globally are expected to be 5G-ready. But if you’re looking to buy one today, there are plenty of options out there whatever might be your budget. The entry price will continue to come down in the coming years. 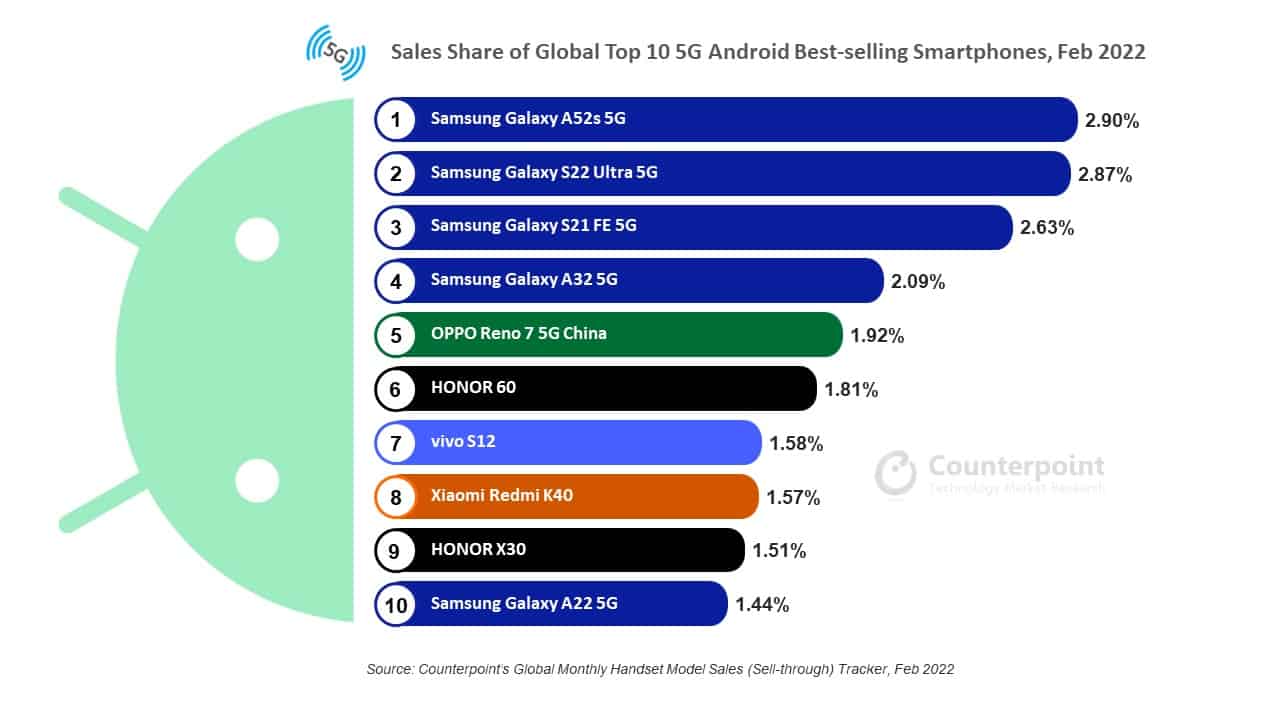