Google is preparing to launch the Pixel 6a, likely at I/O next month. Which got us thinking about how the Pixel 6a could be better. And why Google should essentially copy what Apple does with the iPhone SE.

Now yes, Google does this already to an extent. Providing the same cameras on a cheaper model, and the same design. But Google should go a step further, now that they have Tensor. You see, Apple basically uses an older design, one that has been around since roughly 2016, puts its newest processor in there, upgrades the storage (faster storage, not necessarily more storage), and prices it around $400. Google could do that pretty easily now with the Pixel 6a.

The Pixel 6a is going to adopt the Pixel 6 design

Pixel 6a is likely going to look like the Pixel 6 that was released last year. That’s complete with the new camera visor design, which has actually grown on me. But why does the Pixel 6a need to have this new design? There’s likely a bunch of old Pixel 3, 4 and 5 series models still in Google’s hands that could be repurposed into a Pixel 6a.

Doing this would also decrease the R&D budget for the Pixel 6a, allowing Google to spend that money on newer hardware, like the new Tensor chipset that it debuted last year. Which it is rumored to have, but with the new design, it’ll likely go up in price. However, it can’t go up to much, as the Pixel 6 is only $599. While the Pixel 5a is $449.

There’s also a ton of people that like the old design of the Pixel. It’s plastic, yeah, but who cares? I know many that have the Pixel 4a and Pixel 5a and absolutely love the build. Additionally, most looking for a sub-$500 smartphone are putting a case on it, and never rocking it naked. So that plastic back is meaningless. That would also mean the fingerprint sensor returns to the back of the phone, similar to how people love the iPhone SE for that fingerprint sensor. 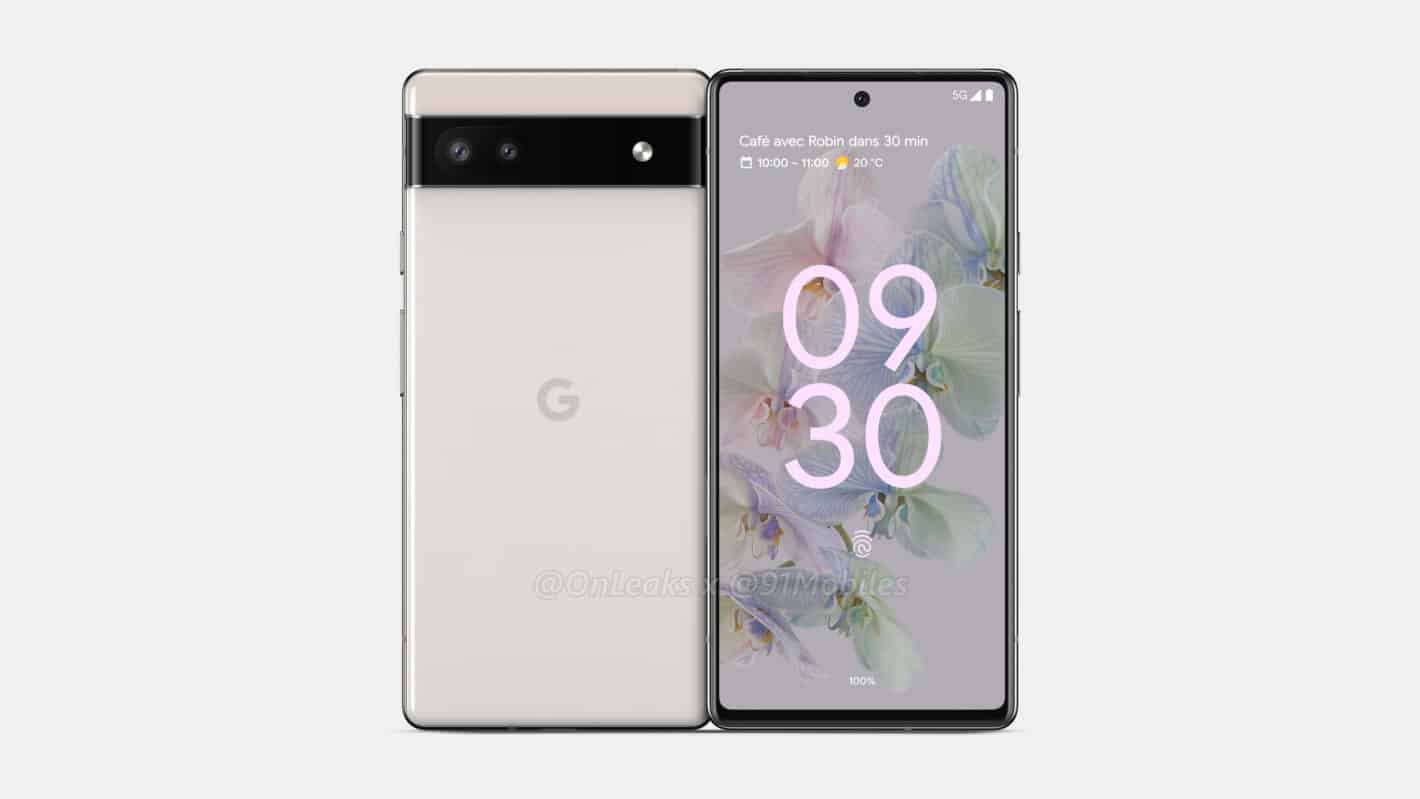 Bring back the back-mounted fingerprint sensor

Some love the under-display sensor for fingerprints, but many of us hate it. That’s because of how slow it is, and the fact that you can’t really tell where it is, so it takes longer to unlock. The rear-mounted fingerprint sensor was amazing, it was right where your index finger normally sat anyways, so it was easy to unlock. People would love for that to come back on a Pixel 6a.

It’s one of the reasons why the iPhone SE sells as well as it does. There are people that do not want to give up that fingerprint sensor for Face ID. And during the pandemic, that made a lot of sense. As Face ID was useless when we were wearing masks – though Apple finally added Face ID with a mask last month.

While the majority of people do want a bigger phone, as we are increasingly watching more and more videos on our phones. There are still people that want a smaller phone. Google’s Pixel 4a and Pixel 5 were small, and seemed to sell pretty well. Though I’m sure that the lower prices also helped.

In fact, our Assistant Editor, Kristijan still sports a Pixel 4a. He tried out the Pixel 6 when it launched last year, and found it way to big. Which, to be fair, it is a much larger phone than the Pixel 4a. And that’s another reason why the iPhone SE sells so well for Apple. It’s a smaller phone, with all of the latest specs, at a much lower price.

Would a smaller Pixel 6a sell millions? No. But the Pixel as a whole doesn’t sell millions. Even though the Pixel 6 and 6 Pro were the best selling Pixels yet, they still barely make a dent in the market. But it’s something that people want.

At $399, that would make the Pixel 6a a guaranteed recommendation for a lot of people. Especially with 128GB of storage on-board. Now, they likely won’t go that low, due to inflation being so high right now. It’ll likely go up in price if anything.

Make it available on all carriers

This is really the final missing piece for Google and a Pixel 6a. The carriers. While most of the rest of the world buys phones unlocked, that’s not how things work in the US. The majority of people buy their phones from their carriers, financing them as well. The Pixel hasn’t really been on all three carriers much, and never really been available from the prepaid and MVNO carriers. But the Pixel 6a would be the perfect phone to be available at Cricket, Boost Mobile, Straight Talk and others. As it is a good, cheap phone.

That’s the missing piece for Google, besides better marketing. There’s still a lot of people that don’t know Google makes phones. Which is kind of crazy, since Pixel has been around since 2015, and Nexus well before that. But that’s how it is.

Google desperately needs to work out deals with T-Mobile, AT&T and Verizon. And it needs to have those store employees push the Pixel. Samsung and Apple sell so well because they offer commission to carriers for selling those phones. If you ever walk into a Verizon store and tell them you need a new phone. They are likely showing you Samsung or Apple phones first. So they can get that commission. That’s basically the only way Google can compete now.

This is why the iPhone SE sells so well

These are all the reasons why the iPhone SE sells so well for Apple. How well, you might ask? Well, according to Counterpoint Research, last year, the iPhone held 7 of the top 10 best-selling smartphones globally. The iPhone SE (2020) came in at #8, ahead of the iPhone 13 Pro Max, surprisingly (though it did come out in September). Interestingly, the other three options in this list that weren’t the iPhone was the Galaxy A12, Redmi 9A and Redmi 9. This shows you that, for Android, the most popular phones are cheap. As all three of those phones are under $200. 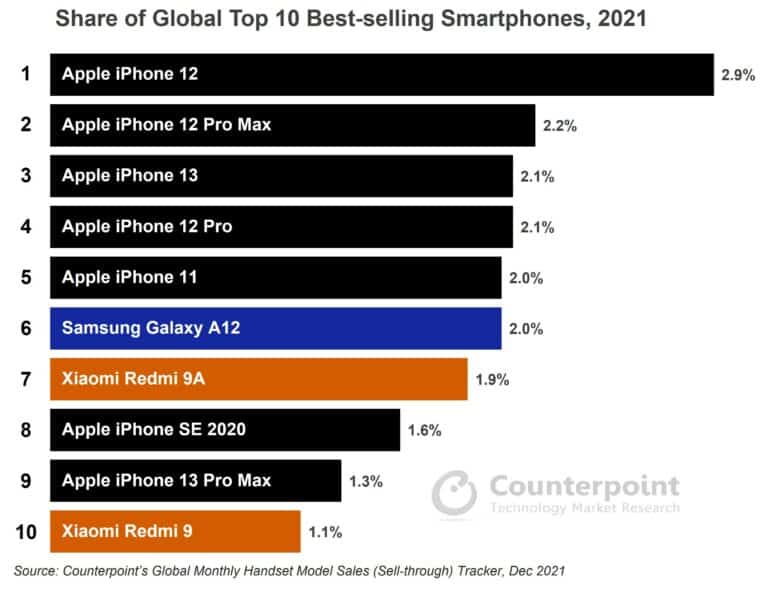 So Google, if you’re serious about competing, do these things. Lower the price to compete with the iPhone SE, use the same processor as Pixel 6, use the older design from Pixel 5 and earlier, and keep it small. It will likely be one of the best value phones of the year.