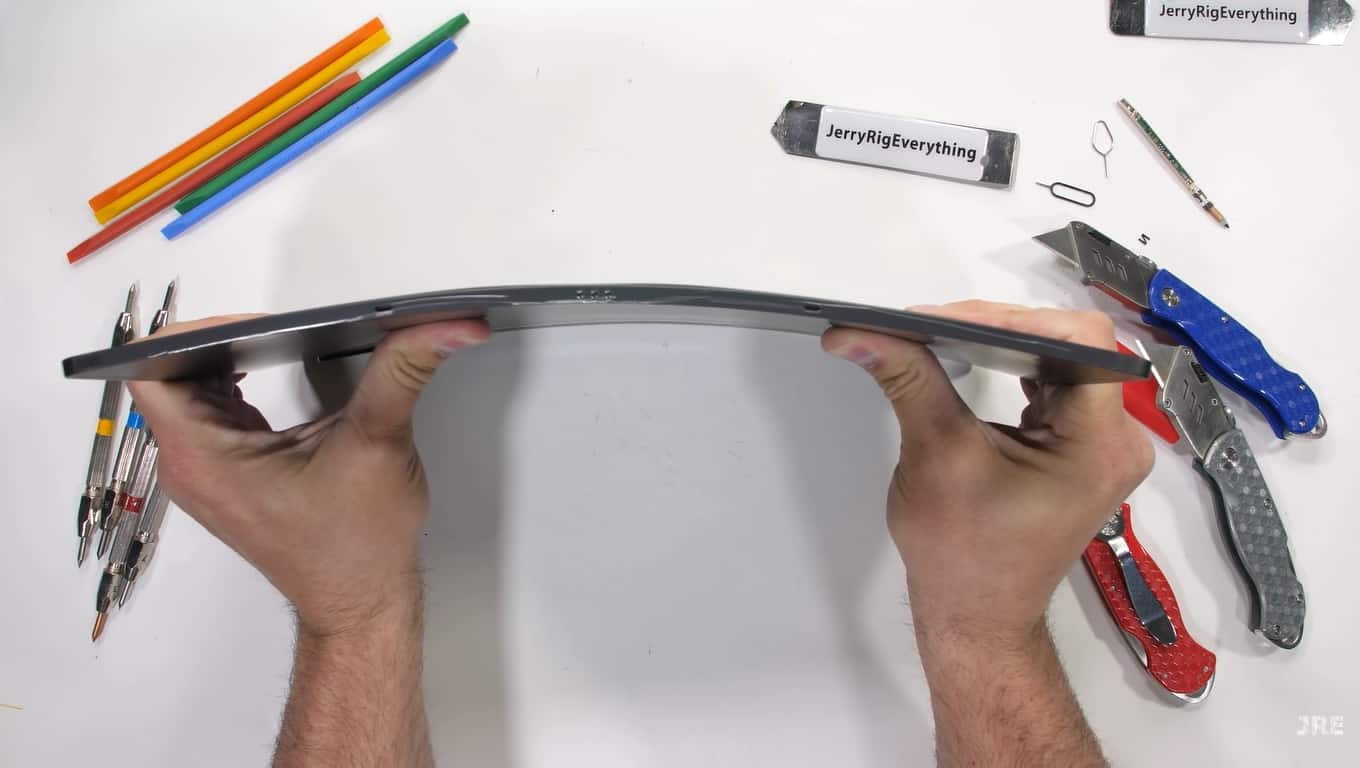 Samsung‘s Galaxy Tab S8 Ultra recently made it to the table of YouTuber Zack Nelson of the popular YouTube channel JerryRigEverything. And surprisingly, the gigantic slate defied odds to survive Zack’s brutal durability tests, including the bend test.

The Galaxy Tab S8 Ultra is a huge Android tablet, measuring 326.4mm (12.85 inches) in length and weighing 726 grams (1.6 pounds). Perhaps it’s the largest tablet ever to go through durability tests on the YouTube channel JerryRigEverything. But at the same time, it’s incredibly thin at just 5.5 mm (0.2 inches). By comparison, Apple’s iPad Pro (2021) measures 280.6mm in length and 6.4mm in thickness and weighs 682 grams.

The iPad Pro series doesn’t have a very good track record when it comes to Zack’s bend tests. The 2021 model did come out in one piece but with a permanent bend. The previous two models “crumbled like crackers.”

This didn’t instill much confidence in Zack for the Galaxy Tab S8 Ultra, which is thinner than those. He expected to turn the giant of a tablet into a foldable (break into two pieces) by applying some brute force. But to his surprise, and of everyone watching the video, the device didn’t break. It exhibited quite a decent flex when bent from both front and back, but no cracks. All in all, the Galaxy Tab S8 Ultra passed Zack’s bend test with flying colors.

Zack says he was expecting carnage when he opened the Galaxy Tab S8 Ultra box. But it “frustratingly” came out in one piece, and perfectly functioning. “I am a decently large person, and according to the current law of the universe, it should snap. I am not sure what physics-defying black magic Samsung constructed this thing with,” Zack concludes.

Samsung introduced a new metallic material with the Galaxy S22 and Galaxy Tab S8 series earlier this year. Called Armor Aluminum, the Korean brand touts this material to be over 30 percent more scratch-resistant and 40 percent less prone to bending than the material used on last year’s Galaxy Tab S7. Perhaps that helped in the structural integrity of the device during Zack’s bend test.

This durability test of the Galaxy Tab S8 Ultra also makes the device go through several other tortures that you usually see on the YouTube channel JerryRigEverything. These include scratch tests, flame tests, and more. You can watch the full video of the new Samsung tablet passing these grueling tests below.