Today, Nothing officially announced that they are working on a phone. Big surprise there, we all knew that they were working on one, but now I guess it’s official. Plenty of people are excited about it, after what Nothing’s founder, Carl Pei was able to do at OnePlus before heading out the door. However, I’m here to temper those expectations a bit.

The Nothing Phone 1 could be the best phone ever built, but it won’t make a splash in the US. It’s a market that is very saturated by Samsung and Apple already. Not to mention that if you’re not on a carrier, you’re not going to move many units. Let’s take a moment to explain why we believe this will be the case.

At its event, Nothing mentioned Apple over 60 times in its presentation. And has even said that it is looking to take on Apple and not any of the other Android manufacturers. Google likely is happy with that, as it wants more Android users of course. But taking a piece of Apple’s cash cow is not going to be easy, and many other, larger OEMs have tried.

Remember, Nothing is actually a startup. Unlike OnePlus who had the backing of BBK Electronics (the company that owns OPPO, Vivo, Realme and a few other brands). So for a startup to come in and beat a nearly $3 trillion company, is basically impossible.

Not only because making a compelling smartphone that could make iPhone users switch over is difficult, it’s also difficult to leave that walled garden. And it’s the same way going from Android to iPhone. iPhone users would need to give up iMessage, as well as rebuy all of their paid apps, find new apps for ones that don’t exist on Android. They’d need to get new headphones, a new smartwatch, new everything. And that just won’t happen.

This is why you see a lot more movement between Android OEMs than from Android to iPhone and vice versa.

You need to be available in carrier stores

The US is a very different market compared to a lot of other countries. Most countries in Europe and Asia, most people will buy their phone unlocked and put it on a carrier. In the US, most people will buy whatever phone their carrier has. So if your phone is not sold at Verizon, T-Mobile or AT&T, you’re not going to sell many. This is something that Sony and OnePlus know very well.

OnePlus started out on T-Mobile, after selling phones for nearly five years. Then it jumped onto Verizon and things started to look up. However, Verizon decided it didn’t want to sell OnePlus phones any longer and OnePlus is back to just T-Mobile. Why? Well, we don’t really know, but the most obvious reason is sales. If a phone doesn’t sell, a carrier will stop offering it, and offer something in its place that will sell. In this case, that’s going to be Samsung or the iPhone. For Verizon, Motorola is also included there.

As much as we like to preach here, to buy your phones unlocked, that just doesn’t happen in the US. Most people are going to head into their carrier’s store, tell them they need a new phone and how much they can spend. And there is an iPhone or a Galaxy smartphone available at that price. They aren’t going to spend time looking for a Sony smartphone to buy off Amazon, or a OnePlus 10 Pro off of OnePlus’ website – if it ever leaves China.

Once more, why would a carrier take a chance on a smartphone from an unknown company that has no track record on anything really. We don’t know how their customer support will be, how updates will be, or even how their phones will hold up over the next couple of years. AT&T used to be the one that would take on a newcomer like this, but they’ve been burned enough by phones like the Facebook Phone and the Amazon Fire Phone to know better.

Sadly, I see the Nothing Phone 1 as more of a phone that will carve out a spot in the European and Asian markets. That’s great for the Europeans and Asians out there, but for those of us in the US, that means more of Samsung or Apple for your next phone.

We know that Carl Pei knows how to make a good phone and use the best specs. So we have no doubt that this will be a pretty good phone, but will it take some market share from Apple? Very unlikely. 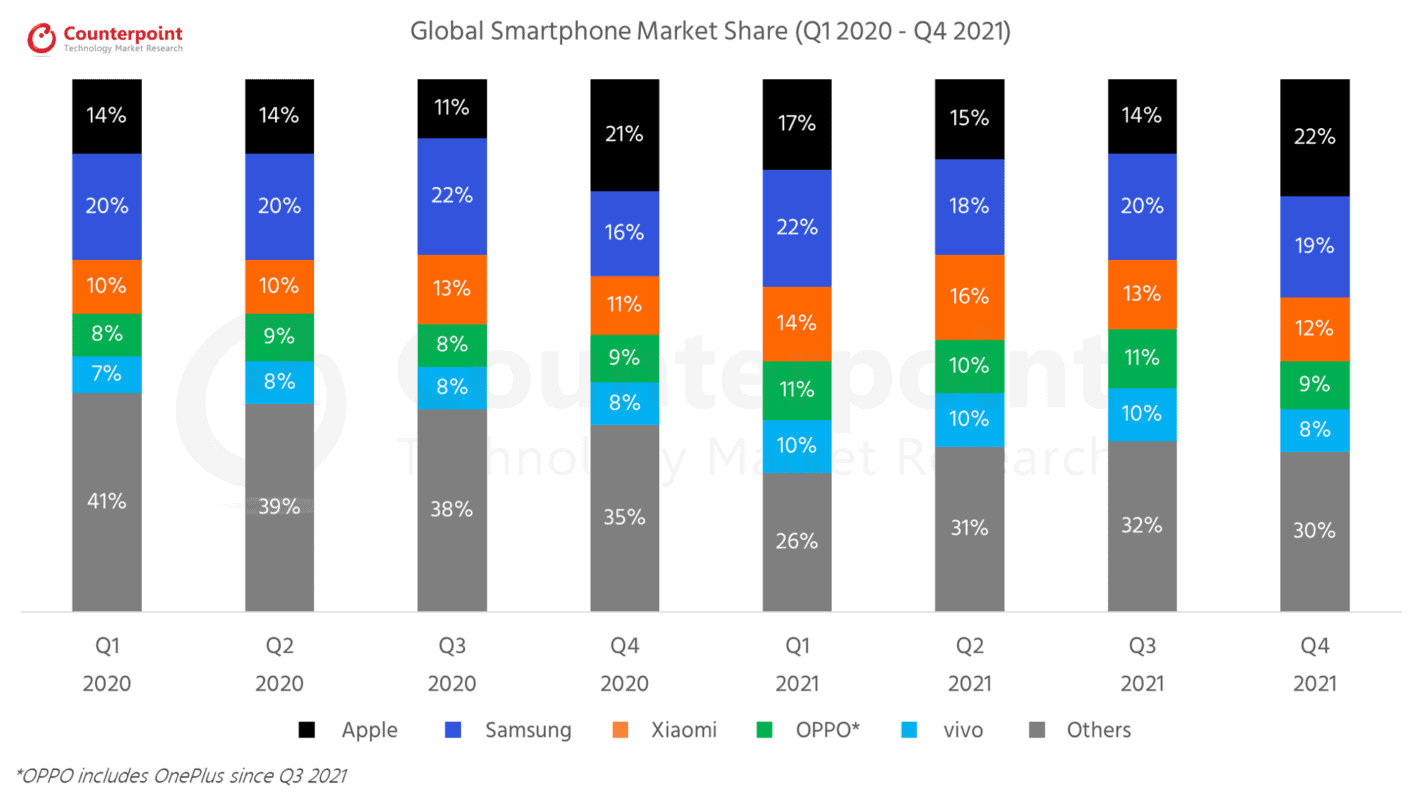 As of Q4 2021, Apple had 22% of the global smartphone market share. While Samsung had 19%, OnePlus, the company Carl Pei founded before Nothing, is not even on this list. They are in “others”, which is a growing category now. Samsung and Apple also have very loyal followings, so getting a serious chunk of those users to drop their iPhone or Galaxy for a Nothing phone is going to be extremely difficult.

We could be totally wrong, and we’re okay with that

Of course, on the flip side, we could be totally wrong. And the Nothing Phone 1 could be a massive hit in the US. But knowing what we know about the US market and how Americans buy their phones, the likely hood of this is pretty small.

Americans would love to have another option in the US for smartphones, but Apple and Samsung have done so much to push out other competitors, that’s pretty unlikely to happen.